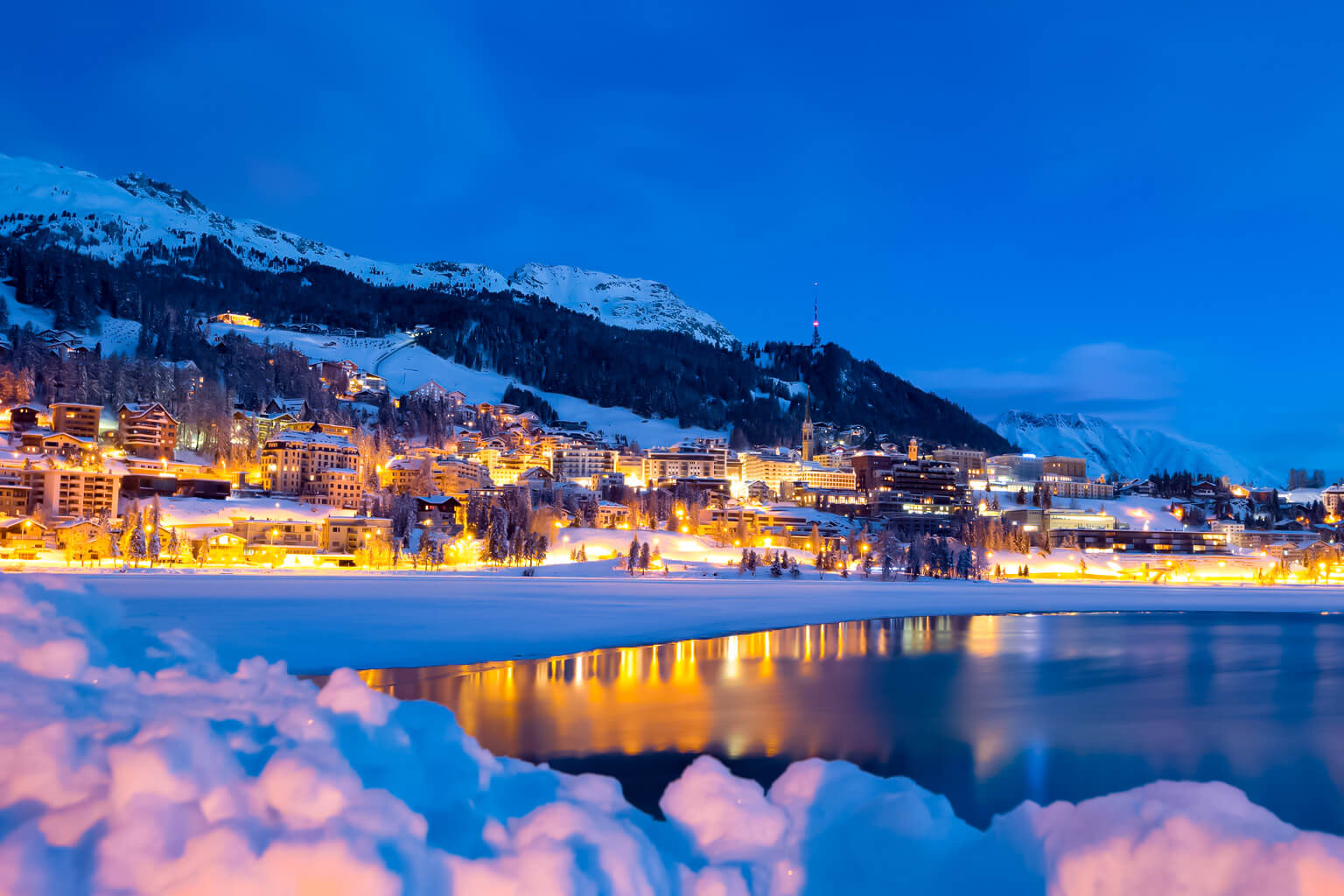 St. Moritz is one of the most well-known tourist destinations in the world, having hosted the Winter Olympics twice and being a UNESCO World Heritage site. Its name is a registered brand and is linked with style, elegance, and class across the globe.

It’s no surprise that St. Moritz is so well-known: unique events like the Cresta Run, the Engadin cross-country ski marathon, and polo-on-snow have recently been joined by stunning kite-boarding over the valley floor’s acres of frozen lakes. The resort claims to be the origin of the “white winter vacation” in 1864 and possesses Switzerland’s oldest Tourism Board; it is also the only site in the nation to have held the Olympic Winter Games, in 1928 and 1948. To bring the region’s skiing up to date, the Alpine Ski World Championships were held at St. Moritz in 2003, as they had been in 1934, 1948, and 1974.

St Moritz’s three major ski regions are distinct yet large enough to stand on their own. If you’re willing to wait for the buses or drive between areas, you’ll enjoy the distinctly different slopes of each domain: the extensive, rolling, well-groomed Corviglia pistes; the drama of the high Corvatsch peak followed by a big vertical; and the massive descent across the glacier and the steepest slopes of the Diavolleza. There’s also heli-skiing, which completely characterizes the resort: you fly to the top of the hill and ski down the slope, bypassing the need to ride those tedious lifts with the rest of the hoi polloi…

First-time visitors to town are perplexed as to what all the buzz is about. The center of St. Moritz has no evident particular traits, being located on the lakefront and climbing up the high hills towards the ski domain. It’s neither too gorgeous nor overflowing with nightlife possibilities; the most notable characteristic is the quantity of luxury boutiques offering items you’ll never need on a ski vacation or anyplace else. The most of the activity, if you can call it that, occurs behind the closed doors of the big five-star hotels, leaving others in the cold. A more relaxing and welcoming spot to stay is in the resort’s spa sector, directly on the lake’s shore, where hotels like the Laudinella serve well to a mid-range clientele, albeit everything is offered under one huge roof, so you may hardly get out except to ski.

It has its own airport and world-renowned fast railways.

Today, St. Moritz is the most popular mountain vacation resort. The sun-kissed Alpine town on the Alps’ south-facing slope has an airport and serves as the terminal for both the Glacier Express and the Bernina Express — two names that stand for pure traditional rail travel. When UNESCO designated the Rhaetian Railway’s Albula and Bernina train lines as World Heritage Sites in 2008, St. Moritz became the world’s first site to have both the Olympic Games and the UNESCO designation.

St. Moritz is well-known for its stately hotels and fine dining: The Badrutt’s Palace Hotel, located in a superb location overlooking Lake St. Moritz, is arguably the most renowned hotel in the Alps and without a doubt an emblem of St. Moritz’s league of five-star hotels. The Kulm Hotel St. Moritz may even lay claim to being the originator of winter vacations. For decades, several additional luxurious and first-class hotels have shaped the image of St. Moritz. Award-winning restaurants top it all off — the valley, at an elevation of 1,856 meters, has so many Gault Millau points that the term “haute cuisine” takes on new meaning.

For more than 80 years, the St. Moritz sun emblem and letters have been used to market the world’s most renowned winter tourist resort. They were created in 1930 to replace the former snow bunny emblem, making them the oldest tourist logos still in use today. Four variations of the sun logo were registered as early as 1937, while the writing for St. Moritz was registered in 1986, making it the world’s first geographical place to be trademarked.

150 years ago, hotelier Johannes Badrutt made a daring wager with his English summer visitors, guaranteeing them pleasant Engadine sunlight in the dead of winter. Badrutt won the bet, and St. Moritz went on to become one of the world’s most renowned winter sports destinations.

In the surrounding region, there are 350 kilometers of pistes with cutting-edge infrastructure for winter sports lovers. The Corviglia, St. Moritz’s ‘home mountain,’ has the steepest start slope in Switzerland, with the Piz Nair Wall’s 100 percent vertiginous descent. Toboggan riders speed down the icy track, which is one of the world’s oldest natural ice bob courses. Winter hikers may enjoy 150 km of winter walking paths, while cross-country skiers can enjoy a 200 km track network. Other winter sports amenities include a snowboard fun park, curling, and altitude training.

Although skiing seems to be a minor component of everything going on in St Moritz, this can only be due to the resort’s uniqueness. The first thing you’d notice at any other location is the massive skiable terrain, one of the world’s biggest, enormous vertical drops, snow-sure heights (with a glacier and abundant snow for further security), and a wonderful contemporary lift system.

The Engadin ski pass, which includes St Moritz’s ski areas as well as numerous others, encompasses 350 kilometers of terrain, roughly 80 kilometers of which are local to St Moritz and its three different ski areas of Corviglia, Corvatsch above neighboring Silvaplana, and the Diavolezza Glacier region.

The resort is not widely recognized as a beginner’s destination: the steep mountain sides above it restrict nursery slopes, and ‘easy runs’ account for barely 10% of the total. Taking the Corviglia funicular to the top of the simplest runs back down to town is one of the better possibilities. On the other side, this is an excellent option for intermediates, who have 70% of the area color-coded red for their delight on largely broad, nicely groomed slopes. The Piz Nair run down to Celerina, which is 8 kilometers long, is one of the highlights.

Experts will also find enough to keep them entertained, especially if they travel off-piste with a guide. The remaining 20% of the lines are black, although they are scattered out throughout the numerous ski areas rather than having one ‘experts mountain’ like Aspen. The Piz Lagalb slopes, the Corvatsch glacier, the Morteratsch run from Diavolezza, and the Hahnensee black down down to St Moritz Bad are among the on-piste highlights.

Some may be surprised to learn that St Moritz is a prominent snowboarding destination, or that the sport’s inaugural Snowboard World Championships in Europe were held here in the ‘early days’ of 1987. However, if you think about it, it must be crucial to the resort to flourish in this winter sport as it does in all others, getting in early with the first international events, just as it did in skating, curling, skiing, or bobsleigh.

Today, there are many snow parks and a half pipe strewn across Engadin, as well as enough of other activities to keep even the most seasoned boarder entertained.

In addition to hiking and mountain biking, tourists may try their hand at sailing, rowing, windsurfing, kitesurfing, tennis, minigolf, and horseback riding. The Ludains Ice Arena is also available to skaters throughout the summer, while golfers will discover an Alpine wonderland with four courses nearby. Among the pleasures of a visit to St. Moritz are romantic carriage rides around the lake, through the Staz forest, or through the stately town itself. Mountaineers will find lots of alternatives in Upper Engadine, which also has 17 climbing gardens of varying difficulty levels.