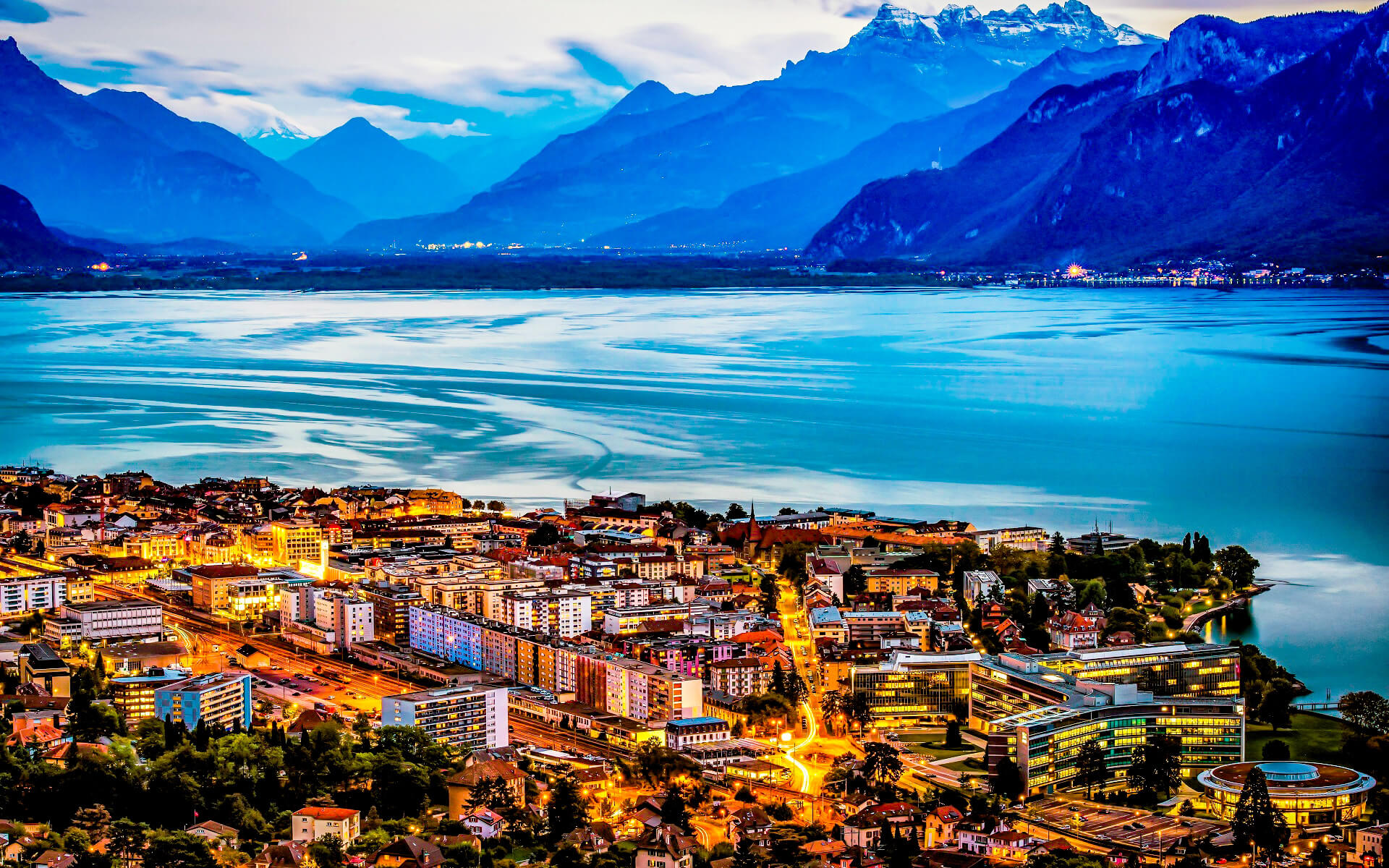 Geneva is the second most populated city in Switzerland (after Zürich) and the most populous city in Romandy, Switzerland’s French-speaking region. It is the capital of the Republic and the Canton of Geneva, located where the Rhône leaves Lake Geneva.

The municipality (ville de Genève) has a population of 197,376 people (as of December 2014), while the canton (which includes the city and its inner-ring suburbs) has a population of 482,545 people. The small agglomération du Grand Genève has 946,000 residents in 2014, spread among 212 municipalities in both Switzerland and France (30 minutes away). The commuter region known as “Métropole lémanique” within Swiss territory has a population of 1.25 million people. This region extends mostly east from Geneva into the Riviera area (Vevey, Montreux) and north-east towards Yverdon-les-Bains in the neighboring canton of Vaud.

Because of the presence of multiple international organizations, notably the headquarters of many United Nations and Red Cross agencies, Geneva is a global metropolis, a financial hub, and a global center for diplomacy. Geneva is the city with the greatest concentration of international organizations in the world. It is also the site of the signing of the Geneva Conventions, which govern the treatment of noncombatants and prisoners of war during battle.

The Global Financial Centres Index classified Geneva as the world’s ninth most significant financial hub for competitiveness, ahead of Frankfurt, and third in Europe after London and Zürich. According to a 2009 Mercer poll, Geneva has the world’s third-highest quality of life (after Vienna and Zürich for expats; it is just outranked by Zürich). The city has been dubbed the “Peace Capital” and the “World’s Most Compact Metropolis.” Geneva was voted the fourth and fifth most expensive cities in the world in 2009 and 2011, respectively.

Geneva (French:Genève, German:Genf), Switzerland’s second-most populated city and the country’s biggest French-speaking metropolis, is one of the world’s main capitals of international diplomacy, serving as the headquarters of the International Committee of the Red Cross since its founding in 1863. Although the United Nations is now headquartered in New York, it maintains a significant presence in Geneva via the Palais des Nations and several of its sister/child organizations, such as the World Health and International Labour Organizations. The city of Geneva has a population of 200,000 people, whereas the metropolitan area has a population of 915,000 people.

In Geneva, 82 buildings or structures are recognized as Swiss historic sites of national importance, and the whole old city is included in the Inventory of Swiss Heritage Sites.

Geneva has a moderate, oceanic climate. Winters are generally mild, with minor frosts at night and melting temperatures throughout the day. Summers are somewhat warm. Precipitation is ample and fairly evenly distributed throughout the year, except autumn, which is significantly wetter than the other seasons. In the winter, ice storms around Lac Léman are extremely common. Many people love swimming in the lake throughout the summer and use public beaches such as Genève Plage and the Bains des Pâquis. In certain years, snow falls in Geneva during the cooler months of the year. Skiing is possible in the neighboring mountains, which get a lot of snow. Many world-famous ski destinations, such as Verbier and Crans-Montana, are just a little more than two hours distant by automobile. The southerly view from the city center is dominated by Mont Salève (1400 m), which is close over the border in France. Most of the city can see the iconic Mont Blanc, which is surrounded by the mountain alp range that surrounds adjacent Chamonix, one of the closest French skiing locations to Geneva. Other Northern Alps ski destinations that are readily accessible from Geneva Airport include the Grand Massif ski resorts of Samoens, Morillon, and Flaine, as well as Le Grand Bornand and La Clusaz.

Geneva is situated at 46°12′ North, 6°09′ East, near the south-western extremity of Lake Geneva, where it empties into the Rhône. It is bounded by the Alps and the Jura mountain ranges.

Geneva’s elevation is 373.6 meters (1,225.7 feet), which corresponds to the elevation of the biggest of the Pierres du Niton, two enormous boulders erupting from the lake during the previous ice age. General Guillaume Henri Dufour designated this rock as the reference point for surveying throughout Switzerland. The Arve, Geneva’s second major river, runs into the Rhône immediately west of the city center. Mont Blanc is visible from Geneva and is about an hour’s drive from the city center.

The economy of Geneva is mostly service-oriented. The city has a significant and historic financial industry that specializes in private banking (managing assets worth around $1 trillion USD) and international trade financing.

JT Worldwide (JTI), Mediterranean Shipping Company, Vitol, Gunvor, and Mercuria Energy Group have their international headquarters in Geneva. Merck Serono, SITA, Société Générale de Surveillance, STMicroelectronics, and Weatherford International are among the companies involved. Many other multinational corporations, including Caterpillar, DuPont, and Cargill, have international headquarters in the city, as do Take Two Interactive, Electronic Arts, INVISTA, Procter & Gamble, and Oracle Corporation. Hewlett Packard’s headquarters for Europe, Africa, and the Middle East are at Meyrin, near Geneva. PrivatAir’s headquarters are at Meyrin, near Geneva.

Many individuals also work in the various international organizations’ headquarters in Geneva (about 22,233 in March 2012).

The Geneva Motor Show is one of the world’s most major car events. Palexpo, a massive conference center near to the International Airport, hosts the event.

Geneva has a 6.3 percent unemployment rate in 2011. In 2008, there were five persons working in the main economic sector, and around three enterprises were active in this industry. In the secondary industry, there were 9,783 people working and 1,200 firms. The tertiary industry employed 134,429 people and supported 12,489 firms. The municipality had 91,880 individuals who were working in some capacity, with females accounting for 47.7 percent of the workforce.

Swisscom, Salt, and Sunrise are the primary providers of local cellular service. Yallo, Migros, and Coop all have their own mobile promotions. However, don’t be shocked if you discover your phone using a mobile phone in neighboring France. If you purchase one in Switzerland, you must either accept the occasional roaming price or be prepared to manually configure the phone.

If you plan on remaining for an extended period of time, you should consider acquiring a SIM card and/or a phone since it is more cheaper and simpler than dealing with payphones. To minimize fraud, you must now register your identity and address when applying for a SIM card.

Payphones are still pretty widespread here, but very few of them take coins, so plan on purchasing a prepaid card or using a credit card (no surcharge).

Internet cafés have just recently started to take hold in Geneva, and there are currently many that are open late.

In practically all public parks, the city of Geneva has a very excellent coverage of the Free WiFi network. Simply search for the “ville-de-geneve” network.