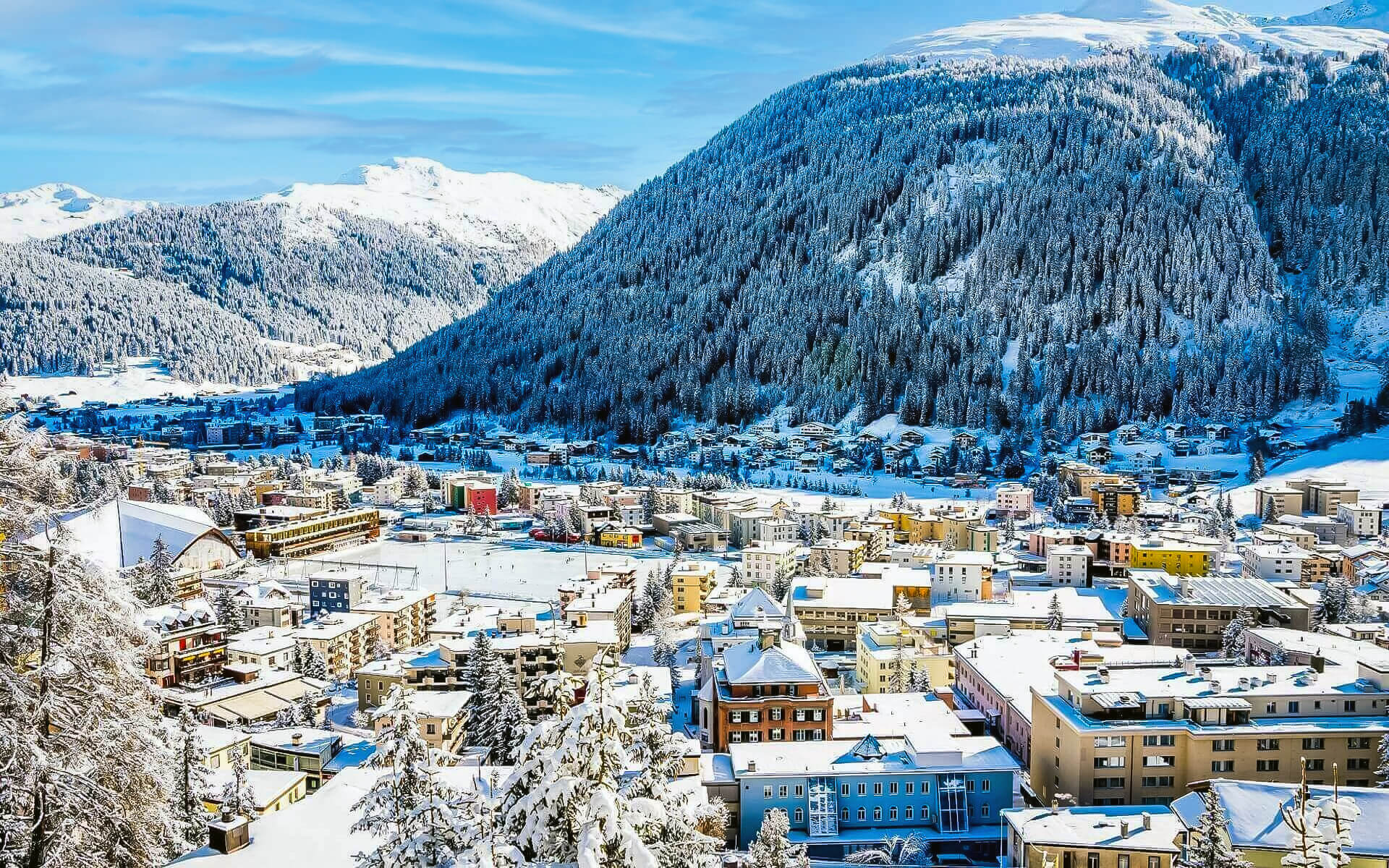 Davos is a winter and summer tourist community in the Graubünden region of eastern Switzerland. Davos sprang to prominence in the early 1990s as the site of the World Economic Forum, an annual winter meeting of international politicians and businessmen who represented a transnational elite. Davos, along with the neighbouring town of Klosters, provides a broad range of winter sports activities as well as summer hiking paths situated in spectacular Alpine surroundings.

Davos Klosters, at 1,560m, is one of Europe’s highest Alpine resorts, with a vast network of ski slopes stretching from the Rinerhorn in the south west to Pischa in the north east, with more than 320km of well-groomed slopes including Klosters’ ski areas of Gotschna and Madrisa and some of the best off-piste skiing in the Alps.

Davos stretches over many kilometres along the vast Landwasser River Valley. The quality and range of its amenities are unparalleled: first-rate leisure possibilities in both summer and winter in a pristine, majestic mountain landscape, excellent meeting infrastructure, globally known sports and cultural events, and renowned museums, galleries, and music festivals. Davos has established its unique architectural style, with its distinctive alpine flat roof. The Davos ice stadium (1981) is one of Europe’s most architecturally remarkable structures of its sort. The alpine metropolis also has excellent hotels, restaurants, and retail possibilities.

Davos’ alpine environment is stunning, and there is much more going on than just skiing. Annually, the World Economic Forum, a Nordic World Cup Race, the professional ice hockey Spengler Cup, and the UK parliamentary ski races are held here. It also serves as the home of the world-renowned Institute for Snow and Avalanche Research. Davos was an early innovator in terms of mountain leisure stays due to the establishment of an appealing variety of leisure amenities all around the urbanised center. As a result, Davos has had coffee shops, theaters, concerts, and even six cinemas to amuse its visitors for over a century. This position as a trendsetter, which served to foster a culture of hope throughout the years of TB in Europe, has remained true of what is now the highest town in the Alps to this day. As a result, the Alps have the most diversified array of evening activities. Furthermore, the town has a plethora of ski huts and snow bars where tourists can unwind with vibrant après ski fun. Finally, the fun mountain Jakobshorn may be considered the origin of après ski.

Davos is a winter sports mecca for skiers and snowboarders from throughout the globe. Guests will discover 58 ski lifts, 300 km of slopes, 75 km of cross-country ski tracks, two artificial ice-skating rinks, Europe’s biggest natural ice rink, and the new “Ice Dream” for ice hockey, skating, and Bavarian curling at elevations ranging from 1124 to 2844 m. There are also eight sledding runs to enjoy! The six Davos-Klosters skiing areas of Parsenn/Gotschna, Jakobshorn, Pischa, Madrisa, Rinerhorn, and Schatzalp/Strela have been combined into an one massive winter sports arena. The Parsenn region, which links Davos with the neighboring resort of Klosters, is a skier’s paradise. The Jakobshorn, on the other hand, is the go-to spot for freestylers, complete with half-pipes and cozy après-ski huts.

Take a horse-drawn sledge ride into the snowy side valleys for a more peaceful experience, or explore the Davos mountains with 111 km of excellently maintained winter pathways and snow-shoe routes.

The cable cars on the Jakobshorn (2590 m), Parsenn (2844 m), Rinerhorn (2490 m), and Schatzalp/Strela give access to three hiking zones with a total of 700 km of defined pathways. Anyone looking for peace and quiet in the midst of nature should hike, cycle, or take a horse-drawn carriage up the lovely side valleys of Sertig, Dischma, or Flüela.

Visit the Davos Lake, which has a bathing area as well with a sailing and surfing center, for a change of scenery. There are also hang-gliding and paragliding options, as well as mountain biking and inline skating trails. Davos is also the starting point for Glacier and Bernina Express rail trips.

Davos offers many beginning zones, including Bolgen on the Jakobshorn, Bünda at the foot of the Parsenn, a children’s area on top of Pischa and Madrisa, and Selfranga.

For novices, there are two tiny areas: Bolgen, near the foot of the Jakobshorn (where it is said the world’s first drag lift was installed in 1934), and Bünda, a ten-minute stroll from the Parsenn. When you’re ready to graduate from the nursery slopes, the Parsenn has some nice broad blue routes to explore. At the summit of Pischa, there is also a children’s area.

In Klosters, the best bet is to go to Madrisa and the Selfranga beginner’s ski area.

Davos has plenty of terrain for intermediates, with the 12km run to Küblis, which runs through pine woods and meadows and through Schwendi huts, being a highlight if there’s enough snow – however snowmaking has made this a more common option.

The Davos Klosters ski region has several broad and confident-boosting red and blue routes, some of which are more than 10 kilometers long. The Parsenn features several wide pistes that are ideal for huge carving turns, although it may become crowded. Their ‘carving piste’ might be chaotic, but when it’s peaceful, it can be out of this world. Madrisa has a lot of intermediate skiing in Klosters.

The Weissfluhgipfel serves as the starting point for the lengthy descent to the settlement of Küblis, which is one of Europe’s longest and most spectacular on-piste runs. It is 12 kilometers long and has a vertical height of well over 2,000 meters. Good intermediates can ski everything except the very first portion, and those who don’t want to start at the short, steep initial section may start at Weissfluhjoch instead. The route begins with vast open stretches and progresses to tight pathways through pine trees, Schwendi cottages in clearings, and on through meadows and past farm buildings.

When you get in Küblis, the café on the railway station has timers that enable you to complete and pay for your meal before boarding the train back to Klosters and then the Gotschnabahn cable car back into the ski resort. Descending to the neighboring valley-floor communities of Saas and Serneus, or perhaps directly to Klosters, are options for this route.

Davos and Klosters include a number of tough black lines as well as eleven unmarked but charted ski trails in addition to fantastic off-piste.

Two difficult black runs, the Meierhofer Tälli and the Gruobenalp, lead down to Wolfgang at the end of Davos Lake. If you’re looking for moguls, consider the run under the Schwarzeealp chair on Gotschnagrat or piste number one off the top of the Weissfluhgipel, which also has lots of other challenges: it has about 360-degrees of off-piste skiing, but it’s steep and has some drop offs. A broad black run descends from Nüllisch Grat through forests and farms to the cable car station on Rinerhorn, providing over 1,000m of vertical fall.

The only way back into Davos is on a black slope, which is notoriously icy (due to the high water content of the snow cannons). Unfortunately, the run comes to an abrupt halt around 200m from the Parsenn’s base, forcing a stroll down a slick portion of road. As a result, most passengers use the funicular back from the half-way station.

The piste map also shows eleven off-piste trails that are not marked on the ground and are not patrolled. These runs may often be left unused for days until people see others utilizing them, at which point the sheep mentality sets in and they become well utilized. From Madrisa to Schlappin, there’s a really lengthy run that’s rated red for the most of the way but black for the final bit. It’s no longer required to catch the Zügenhüttli chair back towards Madrisa before reaching the black part, thanks to a new magic carpet at the bottom of the hill.

Davos (particularly Jakobshorn) is a snowboarding Mecca, with several fun parks, freestyle and rider parks, a moster pipe, and even a snowboard hotel.

Davos has already established itself as a skiing Mecca by 1990. Jakobshorn is THE place to be for snowboarders.

Offering two half-pipes, the one at the mountain’s foot is floodlit until 9 p.m. The O’Neill Evolution Snowboard Jam is hosted here every January, and the Bolgenschanze, a specialist snowboard hotel, is located in Jakobshorn. The Bolgenhof and Snowboarders Palace are also popular.

Parsenn has boardercross and skicross, as well as Friday night skiing and an Iglu town.

Apres-ski, restaurants and other activities in Davos

Off the slopes, there is also a lot to do. The thrill of an ice hockey game is not to be missed – Davos is home to the magnificent “Hockey Club Davos,” which has won 30 championships. If you want a more leisurely ice skating experience, the resort also has Europe’s biggest natural ice rink. For those who are less interested in first lifts, there are several restaurants and pubs, as well as clubs and a casino.

There are several excellent pubs and restaurants, such as the Postli Club, the Tonic Piano bar, and the Cabanna club.

There is a wide range of wonderful restaurants to choose from, like Davoserhof for Nouvelle Cuisine, Bünder Stübli for traditional food, and Café Weber for delectable sweets. Because the terrain is huge, there are several possibilities to ski into secret valleys and explore charming towns and unknown pubs. Mountain eateries may be found all over the place. Davos has a diverse après-ski scene, whilst Klosters is more traditional but nevertheless vibrant.