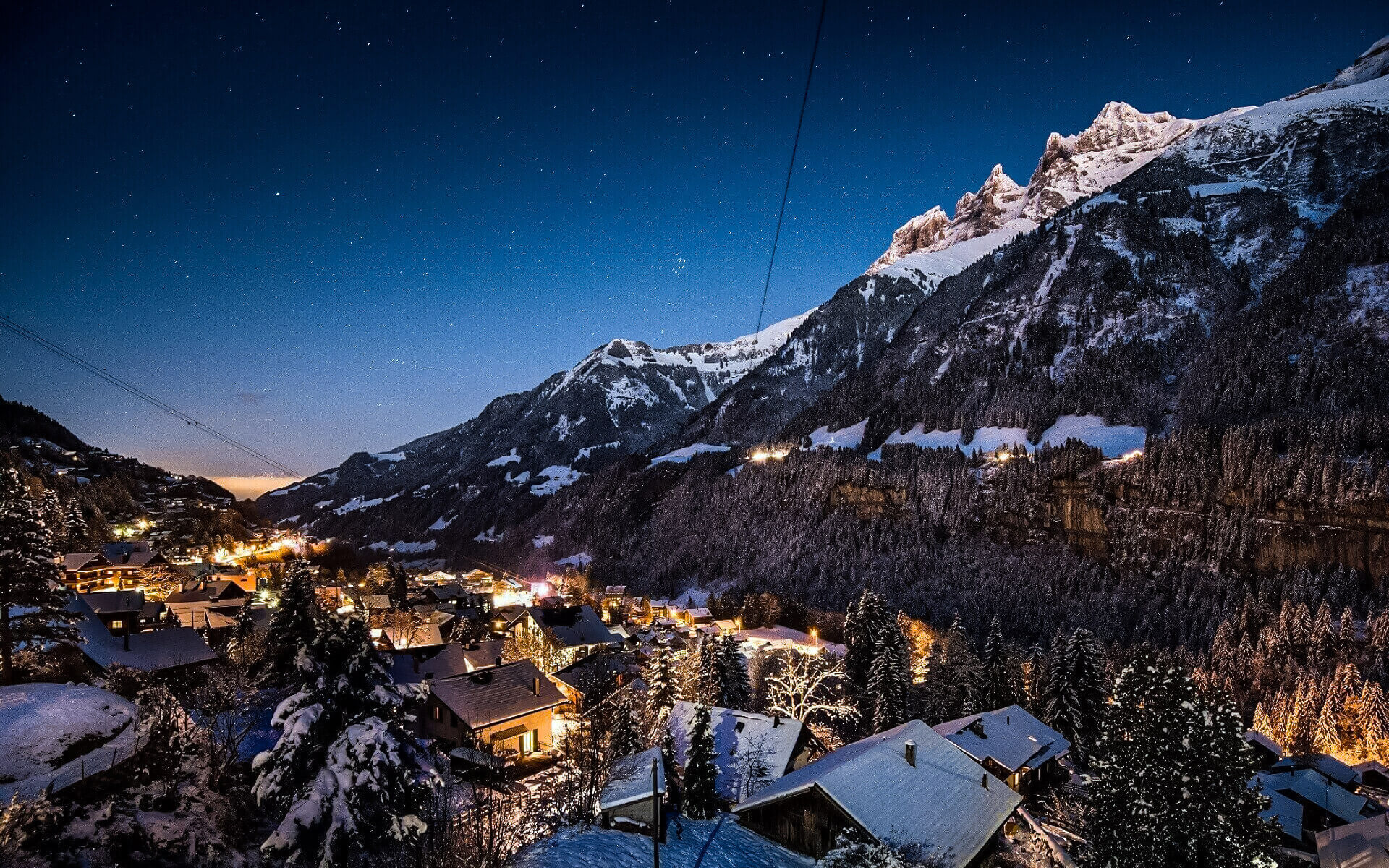 Champéry, which is just 90 minutes by vehicle from Geneva, is both a postcard-perfect mountain hamlet and a sophisticated ski and biking resort. Champéry, one of 12 resort communities in the enormous Portes du Soleil recreational region, is a great year-round destination for hikers, cyclists, skiers, and epicureans.

Champery is one of the oldest Swiss ski resorts and the western entry to the Portes du Soleil ski area. At an elevation of roughly 1050 meters, tucked at the foot of the Dents du Midi and Dents Blanches, this “chocolate box” resort has maintained its identity throughout the years while still undergoing active growth and modernization.

Champery, although not ski-in/ski-out, is nonetheless a decent resort for skiers of all levels, with the exception of extreme novices. There are 209 lifts servicing 430 pistes over 650 kilometers of skiing. Every statistic screams massive.

Apres ski is often held in the hotels, however the restaurants are superb and provide a wide range of options. There are late night clubs and bars for the hard core insomniac, as well as a large selection of non-skiing activities in and around Champery.

A unique microclimate between Mont Blanc and Geneva gives a wealth of snowfall to the Portes du Soleil. The current average snowfall in Avoriaz is a whopping 800cm (giving Val Thorens a run for its money). When it isn’t enough, 694 snow cannons keep the lower pistes covered. One of the benefits of a large ski region is that you can search around for the best conditions, and if the Swiss side is bad, the French side is usually terrific.

If eccentric activities pique your interest, come here in March for the Rock the Pistes Festival, which fills the slopes with the sound of pop-rock and stomping ski boots. Concerts are hosted in strategic locations across the ski resort, and you may ski down to them with your regular lift ticket. Also in March, the Chavanette Session takes place in the slopes above Champéry, with athletes racing down the feared Swiss Wall. Every year, a local ex-ski racer wins.

Champery is located on two roads under the beautiful Dents du Midi mountain. The newer, lower through road leads up to the Telepherique. The more contemporary Champery structures flank the lower road and it passes the Palladium (the National Ice Sports Centre), but there isn’t much to look at.

In contrast, the upper road that runs through Champery proper is genuine Swiss “Chocolate Box” beauty. Old and well-kept wooden chalets, restaurants, and stores merge together with everything you’d expect from a Swiss Alpine ski resort.

Tourism in Champery began in 1857, and the Swiss Ski School in Champery was created in 1932, making it one of Switzerland’s oldest ski resorts. Development has mostly been ongoing, although with one notable exception, it has been done in great harmony with the architectural history. Founded in 1933, the non-profit Fondation du Patrimoine Champerolain works hard to preserve not just architectural legacy but also cultural past. There’s a lot here for you vultures and amateur historians.

Champery is not large; everything and everything is within a 10-minute walk, so park your vehicle if you have one and avoid cabs. Begin with the fountain at the bottom of the hamlet, where the purity of the water is inscribed in granite for posterity, then visit the clock tower, the wonderful stores, and the ultramodern Mitchell’s to satisfy your thirst.

The clock tower, by the way, may be proof of Champery’s little French influence. When the clock strikes the hour, the face of the clock still reads 5 minutes to the hour! Not exactly the famed Swiss timekeeping.

Lounging with coffees in cozy cafés, you get the impression that Champéry’s residents would rather be somewhere else. It’s difficult to believe that one of the world’s largest ski slopes is just a short distance away. Take the 125-person cable car up and over town, and you’ll find yourself at the Portes du Soleil, which has 650km of runs and 200+ lifts spread over the Swiss-French border. With big-name resorts like Avoriaz, Morzine, and Les Gets luring you into France, carry euros as well as francs.

There’s no dispute about it: you’re in Switzerland. A 100-year-old wooden-seat train winds through town, past balconyed chalets, and on an achingly beautiful ride into the Rhone Valley. This small timber town manages to jam in a clock tower, open-air museum, hot spas, and even a couple of nightclubs while just taking a few minutes to traverse… It’s easy to understand why the folks are so relaxed.  They have a propensity of “bonjouring” you as if you were long-lost neighbors. If you don’t recognize the jagged mountains above as the “Dents du Midi” or the “Dents Blanches,” ask them which are the “Dents du Midi” and which are the “Dents Blanches.”

You could stay here indefinitely, but the creaky train beckons, departing every 30 minutes for the fairy-tale castle of Aigle and the markets and performances of Monthey.

Champéry isn’t ski-in/ski-out – you have to take the 5-minute telepherique to get to the Portes du Soleil – but no one complains. That’s what makes the community so charmingly real, and soon you’ll be staring down 650 kilometers of one of the world’s largest ski resorts. If 209 lifts seems like too many, consider a lift ticket to only the neighboring Swiss towns of Les Crosets, Champoussin, and Morgins, which have 35 lifts and a network of blue, red, and black pistes.

There are better resorts in this huge ski region for first-time skiers (such as Les Gets), and a steep narrow route to the pistes from the top of the Champéry cable car may put a rookie off. However, shaky second-weekers will be OK, and this region is teeming with mild blues to push you to your full ability. Earn significant bragging rights by gliding between all 12 Portes du Soleil destinations from a peaceful Swiss base.

There are 100km of blues and reds on the Swiss side of the ski region alone, and the conceivable intermediate circuits in the larger area might fill a book. See what all the hype is about at Pre La Joux in the Chatel region or the They Valley to Morgins, and don’t forget to spend an afternoon lunching in Avoriaz before attempting the Loop – simply take the chairlift over the Swiss Wall to get back in one piece. Twice a week, night skiing adds further thrills by allowing you to explore these stunning slopes after dark.

The Swiss Wall is the starting and ending point for any discussion about expert skiing at Champéry. This orange-rated run descends 400m in only a 1000m section and has up to 2m moguls, placing it on many people’s “ski before you die” lists. Between the reds, blacks, off-piste, and heli-skiing – which is prohibited on the French border but not here in Switzerland – one week is clearly insufficient.

Boarders and freestyle skiers are well served by the Superpark at Les Crosets (probably Switzerland’s greatest), boardercross at La Foilleuse, and all of the parks at Avoriaz.

Tiny Swiss villages with tiny red trains aren’t the locations to go for blazing Sambuca and mountain lunacy; Morzine is a better choice. Champéry, on the other hand, has mastered the art of little wooden bistros and low-key cafés serving substantial mountain meals that will send you to sleep before you can think about going out. In mountain restaurants like Le Toupin, the closest thing to paradise for a cheese aficionado, and popular small Le Nord, let your taste buds savor the fact that you’re on the border of France and Switzerland.

Mitchell’s, the slickest sports bar we’ve seen to yet, is unquestionably the after-hours hotspot. La Crevasse nightclub puts on a terrific spectacle for those who make it through the food comas.

Off the slopes, Champéry’s main draw is the Palladium sports hall, which has a gym, an ice rink, curling rinks, and a swimming complex all under one elegant roof. Don’t miss out on an afternoon of floating in calcium and magnesium-enriched waters at Therms Parcs. This should get you ready for outdoor experiences like cross-country skiing, paragliding, and snowshoe hikes (on a massive 400km of marked paths in the PdS). Take a night trek along the planetary path in neighboring Morgins if you’re interested in astronomy. Sledding is also popular, with a 4km (2.5 mile) course in neighboring Champoussin, and you can increase the ante in Grand-Paradis with snow kiting or ice climbing late at night. When the alternatives in town get overwhelming, take the creaky train to Montreux on Lake Geneva, the turreted medieval fortress at Aigle, or the Roman ruins at Martigny.

Champéry’s compact town and kid-friendly amenities make it a favourite option for families, and to add to the enjoyment, the resort offers unique weekly itineraries such as introductions to curling and hikes through the village solving the “enchanted piste” riddle.

The Swiss Ski School has a little club for youngsters aged 3 to 7, including weekly slalom races that are a lot of fun. Red Carpet Ski School instructors use a smart blend of fun and games to educate tots ages 3 to 6. They also provide unique family ski packages with an instructor who will ensure that everyone has a good time together, no matter how different their talents are.