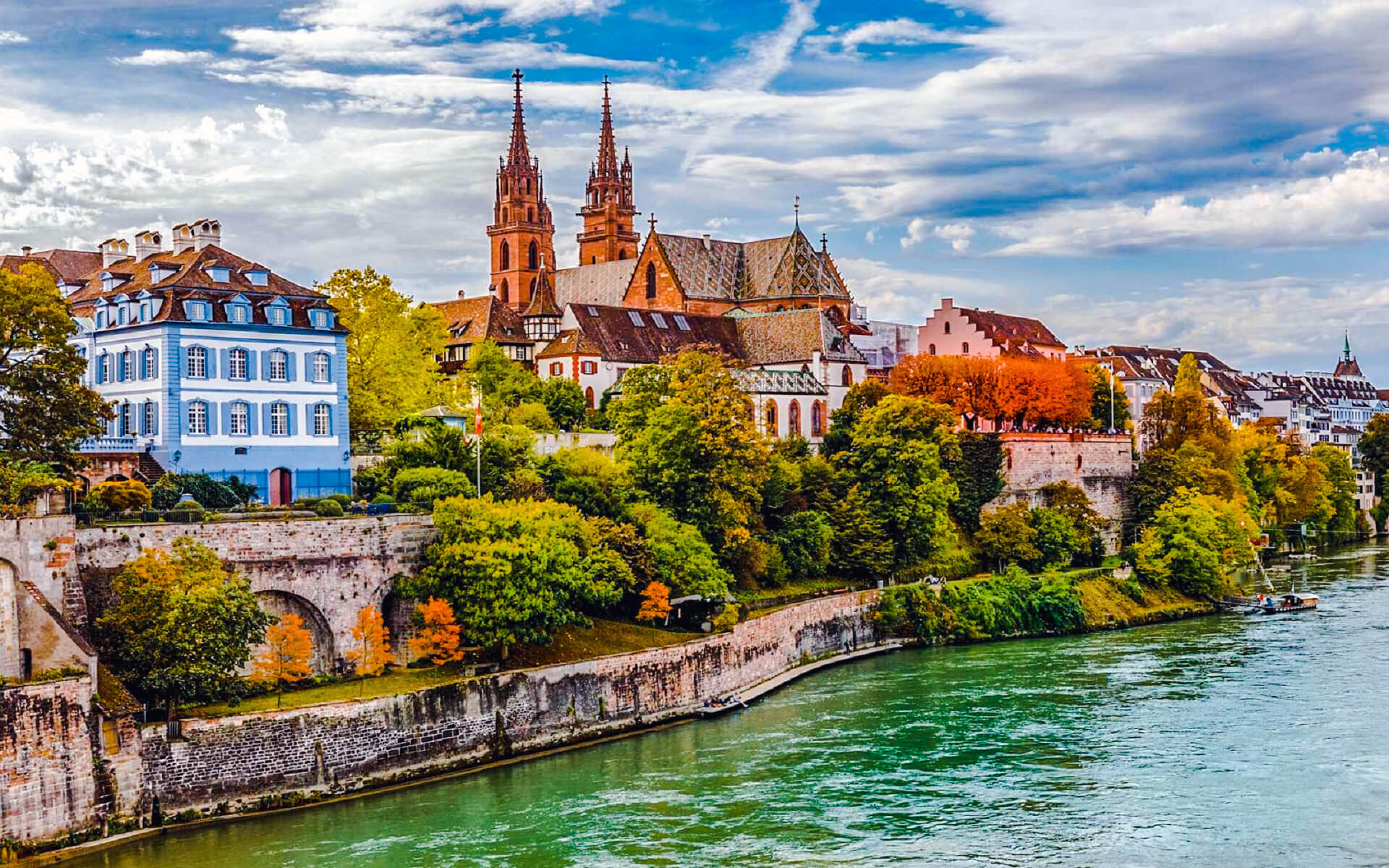 Basel is a city on the Rhine in northern Switzerland. The Basel area, located at the crossroads of Switzerland, Germany, and France, culturally stretches into German Baden-Württemberg and French Alsace. Since the 11th century, Basel has been the seat of a Prince-Bishopric, and it joined the Swiss Confederacy in 1501. Basel had been a commercial hub since the Renaissance, and in the twentieth century it evolved as a center for the chemical and pharmaceutical industries.

With a population of over 195,000 people, Basel is Switzerland’s third-most populated city (after Zürich and Geneva). Basel is located at the crossroads of the Swiss, French, and German borders, and it has suburbs in both France and Germany. With a population of 537,100 across 74 municipalities in Switzerland and an additional 53 in neighboring countries in 2014, the Basel agglomeration was the third biggest in Switzerland (municipal count as of 2000). The tri-national Basel metropolitan region is home to around 830,000 people spread over 226 municipalities.

The official language of Basel is (the Swiss variation of Standard) German, while the major spoken language is an Alemannic Swiss German dialect.

Basel German belongs to the Low Alemannic group, which connects it more closely to Alsatian and Swabian dialects than to the other varieties of Swiss German. Since the Renaissance and the Age of Enlightenment, Basel has been an important cultural center. It is home to the Swiss Confederation’s oldest university (1460).

Basel is one of Switzerland’s underappreciated tourist sites, with a gorgeous medieval old town center, a captivating Carnival, and numerous world-class art institutions designed by architects such as Renzo Piano, Mario Botta, and Herzog & De Meuron. Basel also has a Romanesque Münster (cathedral), a Renaissance Rathaus (town hall), and other instances of high quality modern architecture, including additional buildings by Herzog & De Meuron, Richard Meier, Diener & Diener, and others.

Basel, located in the Dreiländereck, is a gateway to the Swiss Jura mountains and the neighbouring towns of Zürich and Lucerne, as well as the neighboring French area of Alsace and the German Black Forest. If you have a few days to spare, there are plenty of things to see and do.

Basel is located in Switzerland’s northwestern corner. The town has borders with France and Germany and serves as the focal point of this tri-national territory, known as the Dreiländereck (three nations’ corner). Aside from its own attractions, it is a wonderful starting place for exploring the Alsace, Black Forest, and Basel-Land cantons.

If you aim to enjoy the exquisite art shown in the numerous first-rate museums in solitude, visiting Basel may be a vacation for your voice chords. It also holds Art | Basel, the world’s finest market for modern classics and contemporary art, once a year.

Fasnacht, a carnival in Basel, is one of the most magnificent carnivals you’re likely to witness. If you go during the “three loveliest days” of the year, prepare to be surprised and don’t expect to sleep.

BaselTourismus, +41 61 268 68 68, the local tourist information service, has offices across the city, including at the major station, Bahnhof SBB, and in the city center, in the Stadtcasino building at Barfüsserplatz, right across the street from McDonald’s. You may also visit the office at Aeschenvorstadt 36, +41 61 268 68 32, to arrange guided tours.

The city of Basel, situated in the heart of the tri-border area (dreiländereck), is one of Switzerland’s most active economic districts.

Basel has a 4.6 percent unemployment rate in 2014. In 2008, there were 18 individuals working in the main economic sector, and around 9 enterprises were active in this area. In the secondary sector, 34,645 people were employed, and there were 1,176 firms. The tertiary industry employed 120,130 people and supported 8,908 firms. The municipality had 82,449 individuals who were working in some capacity, with females accounting for 46.2 percent of the workforce.

In 2000, the municipality had 121,842 employees who commuted in and 19,263 workers who commuted out. The municipality is a net importer of employees, with around 6.3 people coming for every one leaving. About 23.9 percent of the workforce in Basel comes from outside Switzerland, whereas 1.0 percent of natives travel out of the country for employment. 49.2 percent of the working population utilized public transit to go to work, while 18.7 percent drove themselves.