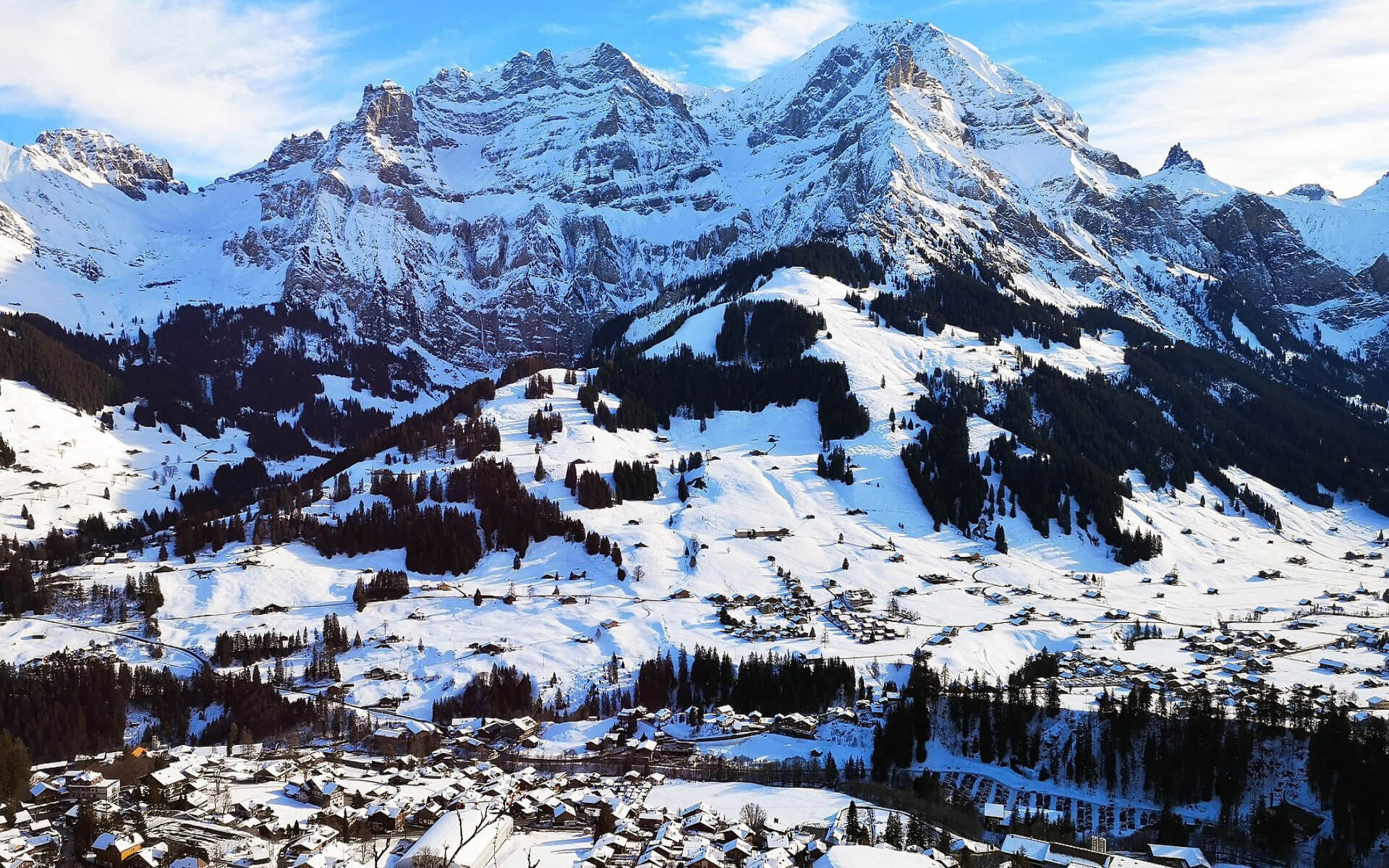 Adelboden is a lovely ski resort in Switzerland’s Bernese Oberland area, featuring an abundance of classic Swiss chalets with red and green shuttered windows and up to 210 kilometers of family-friendly skiing and boarding.

Adelboden has a diverse variety of slopes that span the valley and are split into five appealing areas: Elsigen-Metsch, the Tschentenalp, Silleran – Hahnenmoos, and Lenk – Betelberg. The allure of sunlight and snow will create a peaceful mood, bolstered by a lack of crowds and decent snow, to provide guests with a genuine Swiss skiing experience.

With a large range of child-friendly recreational activities, the resort is a popular winter vacation destination for both families and single travelers. Adelboden ski vacations are particularly well-known for the abundance of cozy mountain hut eateries and snow bars in the vicinity. The majority of the skiing at Adelboden-Lenk is between 1,500m and 2,200m in altitude and is best suited to intermediates and novices. While none of the ski areas are very high, there is superb piste skiing on north and south-facing slopes, as well as some nice off-piste options, including ski touring at higher altitude.

The ski region is large and diverse enough to see reasonable skiing conditions up to April in good snow years, with pistes over 2000m on the Elsighorn and Dossen, and the Tschentenalp and Luegli slopes facing north (to shelter snow from the Swiss spring sunlight).

Adelboden is located in the western Bernese Highlands, at the head of the valley of the Entschlige (High German: Engstlige), which flows into the Kander in Frutigen.

Adelboden is a classic Swiss mountain town atop a terrace with views of the Engstligen waterfalls to the south. The populated valleys of Gilbach, Stigelschwand, Boden, Hirzboden, and Ausserschwand are also included in the village. The church and main street are at 1,350 m (4,430 ft), the highest point in the region is the Grossstrubel at 3,242 m (10,636 ft), and the lowest point is in the Engstligen valley at 1,045 m (3,428 ft).

The vegetation is alpine and sub-alpine, partly forested, with alpine meadows on the slopes, plateaus, and terraces.

Amtsbezirk Frutigen, the municipality’s previous district, was abolished on December 31, 2009. The next day, January 1, 2010, it became a member of the newly formed Verwaltungskreis Frutigen-Niedersimmental.

One of the less well-known resorts in Switzerland Adelboden is a charming community on a south-facing slope with dark wood chalet-style homes with red and green shuttered windows and Swiss flags hanging from the top levels. Dorfstrasse, the hamlet’s main thoroughfare, extends for roughly one kilometer through the center of the village and serves as the focal point for the majority of hotels, stores, and restaurants.

Adelboden’s main street has a good range of stores offering sports equipment, apparel, and souvenirs, as well as Backerei Confiserie Haueter and Confiserie Tea Room Schmid, all of which are worth stopping by for afternoon tea or coffee with pastries and Swiss chocolates. The picturesque village Church organizes festive performances and is well-known for its stained glass windows by Augusto Giacometti, the father of sculptor Alberto Giacometti, specimens of whose work may be seen on the back of a 100 Swiss Franc banknote.

Skiers and boarders crowd Adelboden’s long, narrow main street from Christmas to Easter, while hikers and cyclists visit in the spring and summer. There is plenty of hiking in the winter as well, with many routes marked from the village center ranging from a simple 30-minute walk to full-day hikes to Matten and Kandersteg. Horse pulled sleighs are available for hiring outside the chapel if you want a more romantic and easy mode of transportation. The hamlet is best explored on foot, however a vehicle is useful for commuting to and from some of the lesser ski resorts located 5-10 kilometers from Adelboden.

Adelboden’s major industry for about 500 years, until the beginning of the twentieth century, was farming, and the town center still boasts a lovely old farmhouse erected in 1855 with a hay storage outside for winter feeding. From 1833 until 1874, slate mining bolstered the local economy, followed by match box production from 1867 to 1913. The first tourists arrived in 1873, prompting the construction of numerous hotels, the arrival of the first winter visitors in 1901, and the establishment of the Adelboden Ski Club in 1903.

Adelboden was host to 1,200 wartime “guests of the government” from 1943 to 1945, including 600 American pilots who managed to crash land their crippled aircraft in neutral Switzerland before being picked up by the Swiss Army and well lodged in Adelboden hotels. The church’s wrought iron gates were “given by detained American Airmen and escaped British Commonwealth POW’s in commemoration of many wonderful months spent in Adelboden 1943 – 1945.”

A new ice center, completed in 2010, and the Swissspagroup’s plans for a CHF 140 million investment in the ground-breaking Adelboden Alpine Spa project are among the recent and planned developments in the area. The project plan, which is still subject to local approval, includes a 5-star superior spa hotel with 91 rooms and over 7,200 m2 of space, including underground parking for 100 guests, as well as a 4,500 m2 spa and wellness facility with 840 m2 of pools, 19 treatment rooms, eight saunas, and 16 mineral water pools.

With 210 kilometers of exciting groomers, 72 lifts, and a season that lasts from November to May, it’s no surprise that the ski area Adelboden-Lenk is a favorite among all winter sports enthusiasts. Skiers in the Bernese Oberland may choose from five ski regions, each with a variety of slopes to suit all abilities and interests.

The main ski resort, with 80 kilometers of runs, connects two important towns in the region, with access points at Lenk in the Simmen valley and Adelboden in the Engstligen valley. Beginners should take the lifts up from Lenk, as the slopes around Metschstand (2,100m) and Hahnenmoos (1,957m) provide a plethora of appealing blue-marked routes. Hahnenmoos, being the home of the Gran Masta Park, should also be the primary point of call for freestylers. This terrain park caters to skiers and snowboarders of all ability levels with rails and jumps. There is direct access from Adelboden to the groomers down from Sillerenbühl (1,974m) and Aebi (1,530m), both of which provide lots of eye-catching intermediate routes for skilled skiers. Experts should go to the Boden-Chuenisbärgli lift, which connects to the peak of the region’s iconic World Cup course.

If you’d rather establish your bearings in a smaller ski resort, go to the Betelberg from Lenk, where around half of the 42 kilometers of groomers are labeled as easy. The “Kinderwelt Stoos” is a great spot for kids to burn off some steam on the snow. Families are especially frequent on the Adelboden side, and the tiny Engstligenalp area has practice lifts and the Strubeli kids’ zone. Its elevation of 2,362 meters naturally makes the place a freeride hotspot.

There are plenty of tough slopes to explore on the Tschenten Alpand Frutigen Elsigen-Metsch sub-areas after you’ve gained confidence on your skis. For those wishing to go competitive, Frutigen Elisgen-Metsch also has a permanent racing run and a skicross circuit.

The ski area is divided into sectors, including some excellent nursery slopes on the outskirts of the resort for first-time skiers.

TschentenAlp has the nearest slopes to the hamlet, accessed by cable car and offering breathtaking views of Adelboden. A four-man chair serves three blue and three red runs, as well as the Bergrose freeride route.

A lift from Oey leads to Bergläger and the Silleren-Hahnenmoos region, which extends all the way to Lenk. Experts may take the chairlift from Bergläger to Chuenisbärgli to tackle the world cup slope, while those looking for a gentler descent can choose between the blue and red alternatives from the same lift — we appreciate that various abilities can enjoy the same region.

Speedsters should go to Luegli, where the black Klusi run has timers to see how quickly they can go from top to bottom. The red runs here are also worth a look, and don’t forget to stop by Chumihütte for refreshments and food. In terms of freestyle, the Gran Masta Park has a variety of lines of varying difficulty, whereas the Audi Skicross is usually free to use.

Continuing on, Lenk’s ski area descends from 2001m and boasts some really lengthy red pistes like Tschuggen and Wallegg. However, getting here may take some time, so you’ll need to leave early to make it back in time.

The Elsigen-Metsch ski region may be accessed by bus for a change of scenery. The lengthy blue Weisse Perle and Talabfahrt routes connect back to the base here. The majority of the terrain is suitable for intermediates, although there are a few blacks for those looking for tougher descents. If you want to get away from the crowds, Engstligenalp is a quieter, more snow-sure location with a mix of pistes and cross-country paths.

It doesn’t have to stop there, with Kandersteg and the Jungfrau area nearby to explore without having to go far.

Time Out Pub, with a patio that extends out over the town center and screens for live sports, is one of the primary après locations here. Scott’s bar offers a more modern vibe and a big cocktail menu (try the Toni Sailer), whilst Alte Tavern hosts a DJ on Friday and Saturday evenings.

Alpenblick, Hohliebe-Stubli, Belle Vue, and Schonbuhl all have 14 Gault&Millau points for their gastronomic masterpieces and are well worth a visit. Alfredo in the village is a more relaxed option for pizzas and other Italian favorites. Or, for something altogether different, you may schedule a fondue in an igloo on Engstligenalp…

Swimming at the Frutigen indoor pool, which offers a children’s pool and a magnificent relaxation area with a view of the mountains, is a popular activity. Climbing, bowling, curling, and ice skating are available in the Leisure and Sports Arena, and TschentenAlp offers two sledding slopes: a 2.2km moderate path that is typically floodlit in the nights, and a shorter, steeper trail.