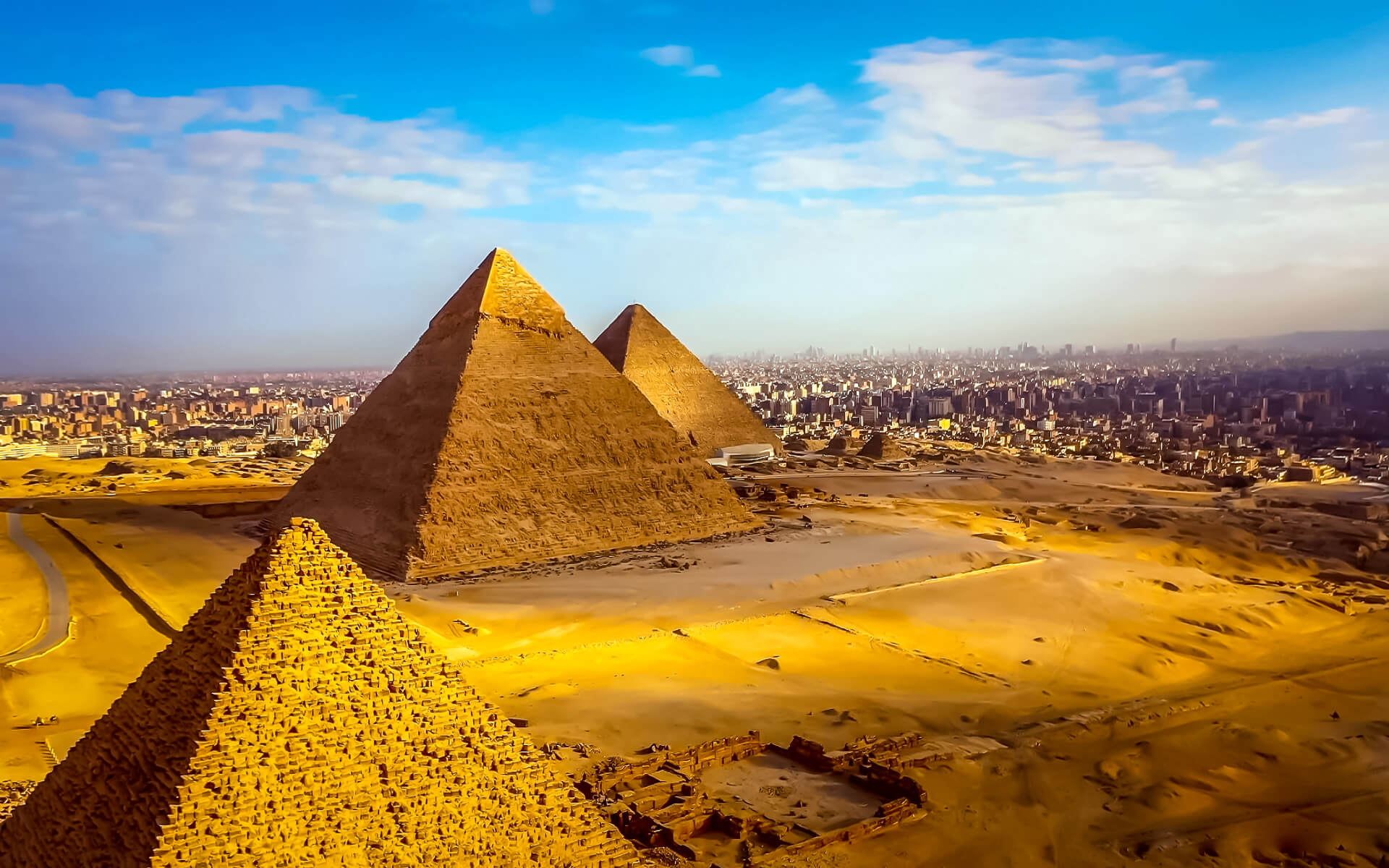 Cairo is Egypt’s capital and, with a population of over 16 million people in the Greater Cairo metropolitan area, one of Africa’s and the Middle East’s most populous cities (the regions which it conveniently straddles). It is also the world’s 19th biggest city and one of the world’s most densely inhabited.

Cairo, on the Nile River, is known for its unique history, which is maintained in the magnificent medieval Islamic city and Coptic buildings in Old Cairo, which has been designated as a UNESCO World Heritage Site. With its many Ancient Egyptian treasures, the Egyptian Museum in the city center is a must-see, as is shopping in the Khan al-Khalili market. A visit to the Giza Pyramids and the neighboring Saqqara Pyramid Complex, where tourists may witness Egypt’s first step pyramid, constructed by the architect Imhotep for the third dynasty king Djoser, is a must for every visitor to Cairo.

Cairo, although steeped in history, is nevertheless home to a thriving contemporary civilization. Built in the 19th century during the administration of Khedive Ismail, the Midan Tahrir district in central Cairo long aspired to be a “Paris on the Nile.” There are also a number of more contemporary suburbs, including as Ma’adi and Heliopolis, as well as Zamalek, a peaceful enclave on Gezira Island with upscale shopping. The ideal time to visit Cairo is in the autumn or spring, when the temperature is cooler. A felucca ride on the Nile or a visit to Al-Azhar Park are both excellent ways to get away from the hustle and bustle of the city.

Tourists have departed Cairo in considerable numbers since the 2011 revolution and continuing counter-revolution. This has allowed for unique experiences of Cairo’s and Egypt’s cultural riches away from the masses. It’s now possible to find oneself alone within a pyramid. Prices are also less expensive.

Egypt has served as a crossroads for various civilizations throughout history, dating back over four thousand years. The Pharaohs, as well as the Greeks, Babylonians, and Romans, have left their mark. Islam was brought to Egypt by Muslims from the Arabian Peninsula, commanded by Amr ibn al-A’as. With his Albanian ancestors, Khedive Mohammad Ali set Egypt on the path to modernity. Given its history, the city’s cultural diversity is only inevitable. Egypt is like to an open museum, with monuments from various historical eras on exhibit all around the country.

Cairo’s nocturnal culture is ascribed not just to young people in nightclubs, but also to the prominence of cafés, which stay open late as social meeting places for shisha smokers, and even to the late-night public activity of families with children.

Cairo is also one of the few Muslim cities with a number of casinos.

Egypt’s finest retail mall, Citystars, is equivalent to an international mall. It carries the majority of multinational brands and cuisine chains. It has a movie theater and an amusement park. The Mall of Arabia is a brand new, large retail mall in the 6 October City suburbs. It is Cairo’s second-largest retail mall, with many of the same American and European brands as Citystars.

The climate of Cairo and the Nile River Valley is a hot desert environment with considerable humidity due to its proximity to the Mediterranean Sea and the Nile Delta.

From March through May, wind storms are common, blowing Saharan dust into the city, and the air is frequently unbearably dry.

Cairo lies in northern Egypt’s Lower Egypt region, some 165 kilometers (100 miles) south of the Mediterranean Sea and 120 kilometers (75 miles) west of the Gulf of Suez and Suez Canal.

The city is located along the Nile River, just south of where it leaves its desert-bound valley and branches into the low-lying Nile Delta area. Despite the fact that the Cairo metropolis stretches in all directions away from the Nile, the city of Cairo only occupies the east bank of the river and two islands within it, with a total area of 453 square kilometers (175 sq mi).

The northern and extreme eastern areas of Cairo, which contain satellite towns, are among the city’s newest expansions, having been built to support the city’s fast development in the late twentieth and early twenty-first centuries. The Nile’s western bank is generally included in Cairo’s metropolitan area, although it also includes the city of Giza and the Giza Governorate. Giza has also grown significantly in recent years, and the city now boasts a population of 2.7 million people, although being a suburb of Cairo.

Cairo is the epicenter of Egypt in every way, as it has been since its establishment in 969 AD. The city generates or travels through the bulk of the nation’s trade. The vast majority of publishing firms and media outlets, as well as virtually all film studios and half of the country’s hospital beds and universities, are all present. This has fuelled fast development in the city, with one out of every five structures being less than 15 years old.

Cairo’s main post office is located in Midan Ataba (open 7AM-7PM Sa – Th, 7AM-12 noon Fr and holidays). The poste restante office is located down the side street to the right of the main post office entrance and is accessible via the final door (open 8 a.m. to 6 p.m. Saturday through Thursday, 10 a.m. to 12 p.m. Friday and holidays) – mail will be stored for three weeks. For international and domestic usage, there are two types of postal boxes. They are usually spotted in couples on the street, and are green and yellow in hue. It is stated that regardless of the method you employ, your letter will be delivered.

In Cairo, like in many other Egyptian and Middle Eastern cities, the Internet is fast expanding. There are currently a plethora of established internet cafés and venues, with a growing number of new ones starting each month. A rising number of cafés, such as Cilantro and Beanos, provide free internet, and if all else fails, you can always try the network at a McDonalds. WiFi is often provided at a cost in luxury hotels. In addition, mobile companies provide USB dongles that enable reasonably high-speed internet connection.

Cell phones are a part of life in Egypt. Most Egyptians seem to be glued to mobile phones whether walking along the street or on a packed bus (similar to what you may find in Japan or Korea). Consider getting an Egyptian SIM card or an inexpensive unlocked phone instead than using your phone from your own country (which frequently has extremely high roaming costs). Mobinil and Vodafone Egypt are Egypt’s two primary carriers.