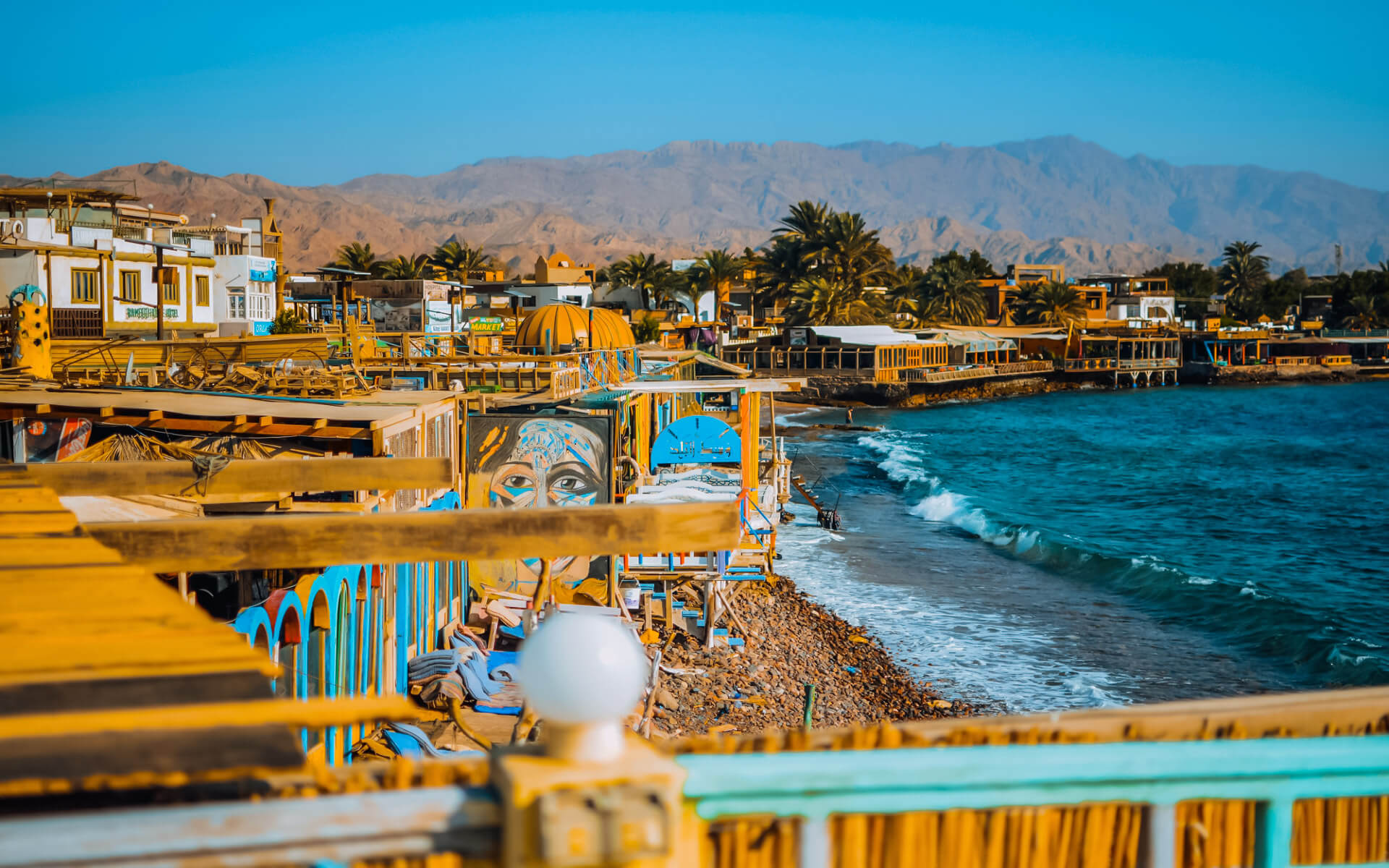 Dahab is a tiny Egyptian village located on the Sinai Peninsula’s southeast coast. Dahab, once a Bedouin fishing town 80 kilometers (50 miles) northeast of Sharm el-Sheikh, is now one of the Sinai’s most coveted diving destinations.

Following Israel’s victory in the Six-Day War, the town was renamed Di-Zahav (Hebrew: ), after a site recorded in the Bible as one of the stops for the Israelites during their exodus from Egypt. In the 1982 Israel-Egypt Peace Treaty, the Sinai Peninsula was returned to Egyptian control. Since the introduction of foreign hotel chains and the construction of additional auxiliary services, the town has become a famous tourist destination. Sharm el-Sheikh International Airport serves Dahab. Masbat (inside Dahab) is a popular diving location, with a large number of dive facilities (50+). The majority of the diving in Dahab is done from the shore.

Dahab is separated into three main sections. Masbat located in the north, and it contains the Bedouin town of Asalah. Mashraba, to the south of Masbat, is more touristy and has a lot more hotels. Medina, in the southwest, features the Laguna region, which is known for its superb shallow-water windsurfing.

Asalah is a well-developed area with several campers and hostels. The majority of visitors to Dahab in the past were backpackers interested in Red Sea diving and snorkeling.

Dahab is a popular tourist destination. It is known all around the globe for its windsurfing. Inside Dahab’s sand spit, consistent breezes provide ideal flat-water conditions. Wavy conditions combine with strong winds farther out from the beach to provide challenging conditions for keen windsurfers. However, in recent years, kitesurfers have taken over the lagoon within the sand spit, with two Russian-owned schools operating directly on the beach. Many reefs are located directly near to seaside hotels, making SCUBA diving, free-diving, and snorkeling popular sports. The neighboring Blue Hole and Canyon, dubbed “The World’s Most Dangerous Diving Site” and “The World’s Most Dangerous Diving Site,” are globally recognized diving locations. The rising destruction of coral by irresponsible divers/dive centers is a major problem that is raising concern, prompting the need for more stringent regulation of dive centers. Camels, horses, cycling, mountain bike tours, jeep and quad bike journeys are all examples of land-based activities. Mount Sinai is a two-hour journey away, including the famed tourist site of Saint Catherine’s Monastery.

The majority of tourists to Dahab in the past have been backpackers who slept in hostels, hotels, or guesthouses in the Masbet region. The expansion of hotels in the Medina region has permitted the arrival of a broader spectrum of visitors in recent years, many of whom come to Dahab particularly to participate in activities like as surfing, windsurfing, diving, kite surfing, sailing, and other water sports.

The term Dahab means “gold” in Egyptian Arabic, and it may allude to the town’s location; gold flowed down from the desert highlands and piled on the alluvial flood plain where the town was established. It’s also possible that the name refers to the color of the dunes to the town’s south. The name comes from the color of the sky just after sunset, according to some residents.

According to one local legend, the town’s name is derived from the floods that occur every five or six years. Larger-than-average seasonal storms in the highlands create a massive flow of water to pour down to the sea, pulling large volumes of sand behind it. During this time, the flood splits the town in two, and the bay is churned up, turning the beaches a bright yellow. It usually lasts a few days and has resulted in property damage and deaths in the past because people were unaware of the abrupt onset and the force with which the water travels. Locals are now prepared when they see clouds over the mountains, and anybody who is fortunate enough to experience it will remember it for the rest of their lives.

Unfortunately, since untrained divers are being brought out in large numbers, much of the coral on the reefs near offshore is progressively vanishing. Another major issue in Masbat is that local eateries are throwing sand and gravel into the water to stretch out towards the coast, disrupting local coral reefs once more.

The surge of female beach visitors, who often dress in more exposing attire, creates a culture to the area that is unexpected.

Dahab, like the rest of Egypt, has a hot desert environment. The weather in the summer is very hot during the day and much hotter at night. The days are warm in the winter, while the nights are comfortable. Even during the winter months, Dahab has a fairly dry environment with little rain.

The month of March sees the most precipitation.

Dahab is divided into three separate sections.Masbat Bay is in the center, approximately equally split by a floodway (the funny bridge over dry sand - except during a rare but impressive flash flood). Masbat's tourism area extends north to Eel Garden (or Meleil as the Bedouin name it) and...

Dahab is one of Egypt's most multi-cultural towns, integrating different religious traditions in a peaceful way; as a consequence, the list of Dahab Holidays contains several prominent African festivals as well as some unique, indigenous festivals. Few people realize that, in addition to the original Bedouin culture, Dahab is...