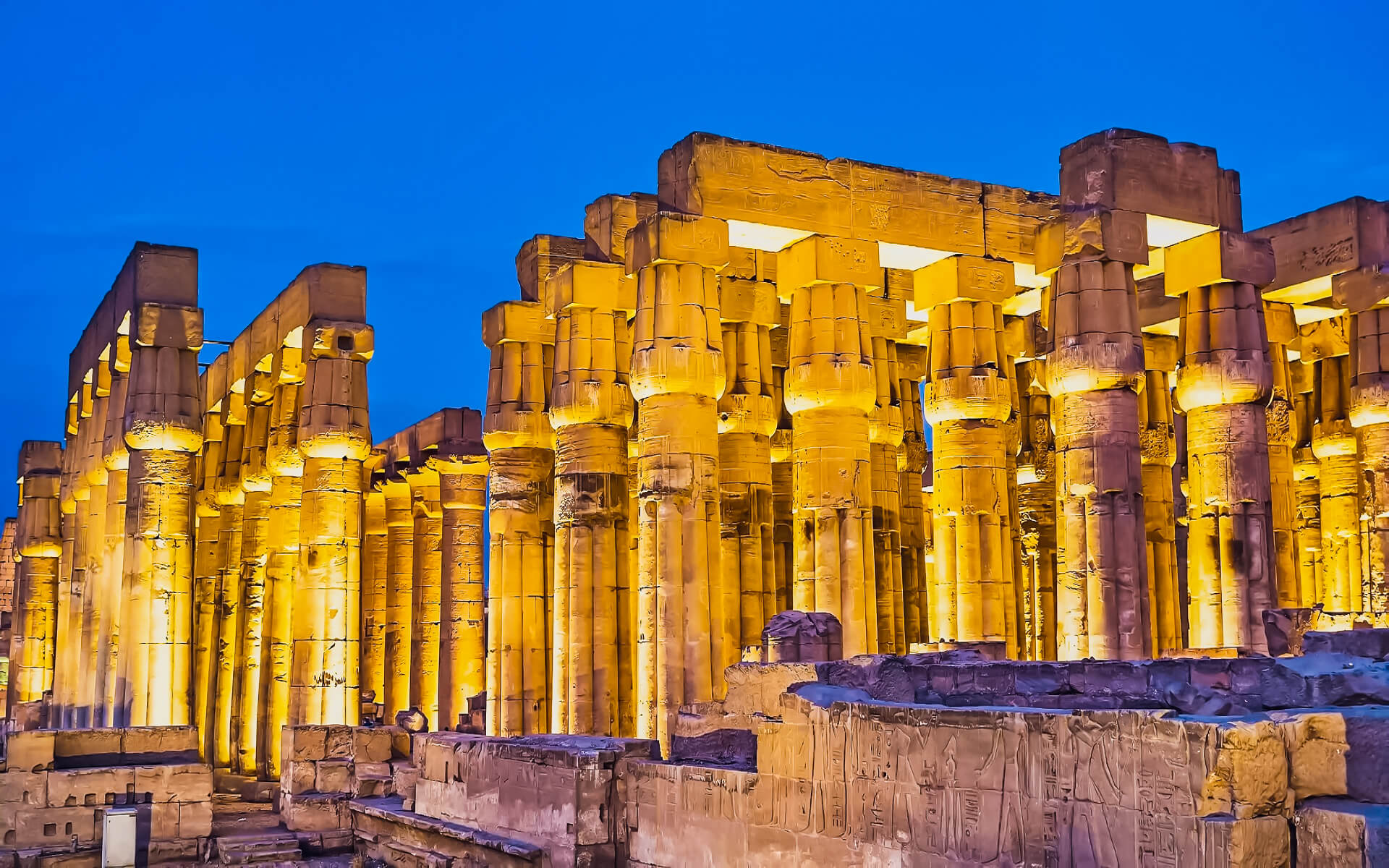 Luxor is the capital of the Luxor Governorate in Upper (southern) Egypt. The city has a population of 487,896 people (2010 estimate), and covers an area of around 416 square kilometers (161 sq mi).

Luxor has long been referred to be the “world’s biggest open-air museum” due to the presence of the remains of the Karnak and Luxor temple complexes inside the current city. Immediately opposite, across the Nile, are the West Bank Necropolis’s monuments, temples, and tombs, which include the Valley of the Kings and Queens.

Thousands of visitors from all over the globe visit these sites each year, significantly contributing to the contemporary city’s economy.

Luxor is the most popular tourist attraction in Upper Egypt (southern Egypt) and the Nile Valley. Luxor, Egypt’s dynastic and religious capital, has plenty to offer the traveler, from massive temples to old royal tombs, via breathtaking desert and river landscapes to a busy contemporary life.

Luxor is to be transformed into a gigantic open-air museum as part of a contentious tourist development proposal. The master plan calls for the construction of new roads, five-star hotels, glamorous stores, and an IMAX theater. The centerpiece is a $11 million initiative to uncover and rebuild the 2.7-kilometer-long (1.7-mile-long) Avenue of Sphinxes that originally connected Luxor and Karnak temples. The ancient processional route was constructed by Amenhotep III and completed by Nectanebo I about 400 BCE. Over a thousand sphinx sculptures lined the road that is now being dug due to silt, residences, mosques, and churches. Excavation began in 2004.

Luxor, like the rest of Egypt, has a hot desert environment. Aswan and Luxor have the warmest summer days of any Egyptian city. Aswan and Luxor have a similar climate. Luxor is one of the world’s hottest, sunniest, and driest cities. During the summer (June, July, and August), average high temperatures exceed 40 °C (104 °F), while average low temperatures stay above 22 °C (72 °F). Average high temperatures stay over 22.0 °C (71.6 °F) during the coldest month of the year, while average low temperatures remain above 5 °C (41 °F).

Luxor’s climate is drier than most other sites in the Sahara, with an average annual precipitation of less than 1 mm (0.04 in). The desert city is one of the driest in the world, with rainfall occurring only on a seasonal basis. Luxor’s air is mostly dry, although significantly more humid than Aswan’s. The average relative humidity is 39.9 percent, ranging from 57 percent in the winter to 27 percent in the summer.

Luxor’s climate is very clear, bright, and sunny throughout the year, with little seasonal change and around 4,000 hours of yearly sunlight, which is quite near to the theoretical maximum.

Additionally, Luxor, Minya, Sohag, Qena, and Asyut have the largest temperature variation between day and night of any city in Egypt, at about 16 °C (29 °F).

Luxor’s economy, like many other Egyptian towns, is highly reliant on tourism. Additionally, a large number of people labor in agriculture, namely sugarcane.

The local economy was devastated by the 1997 Luxor massacre, which claimed the lives of 64 people (including 59 visiting tourists), making it Egypt’s worst terrorist act at the time (before the Sharm el-Sheikh terrorist attacks). For many years after the incident, visitor numbers declined. Following the 2011 Arab Spring, tourism to Egypt fell precipitously, hurting local tourist businesses once more.

Many produce their own food to compensate for financial gaps. The bulk of its population are familiar with goat’s cheese, pigeons, subsidized and home-baked bread, and fresh tomatoes.

To use your mobile phone in Luxor, it is recommended that you visit the Vodafone store at the bottom of Television Street. You may get a Holiday Sim Card for 25LE and avoid any roaming expenses, including international calls. Simply top up the card as needed. If your phone has been ‘locked’ by your carrier, they will advise you on where to unlock it for a price of between 30-50LE.

Alternatively, get a local SIM card at the Orange store opposite the Pyramisa Isis Hotel; here, special tourist lines are available for a few days. Additionally, microsimcards for iPhone 4 and iPad users (prepaid) are available, allowing you to utilize 3G at local Egyptian rates throughout your vacation.

There are several locations throughout Luxor town where visitors may use the internet for email and surfing – in recent years, businesses large and small have ventured into cyberspace as a new sort of cottage industry. Compare prices; 1 LE for an hour or 0.5LE for half is often accepted.

The main post office in Luxor town is located on Sharia al-Mahatta, at the junction of Sharia al-Karnak. Daily from 0830-1430.

In the Tourist Bazaar, there is a small post office.

There is a social stigma associated with public inebriation. Although Egyptians sometimes opt to disregard this, a foreigner being intoxicated in public might create a negative image. The majority of local bars are testosterone-filled hard-drinking places where lone outsiders, particularly lone women, may feel unwelcome.Having said that, there are...