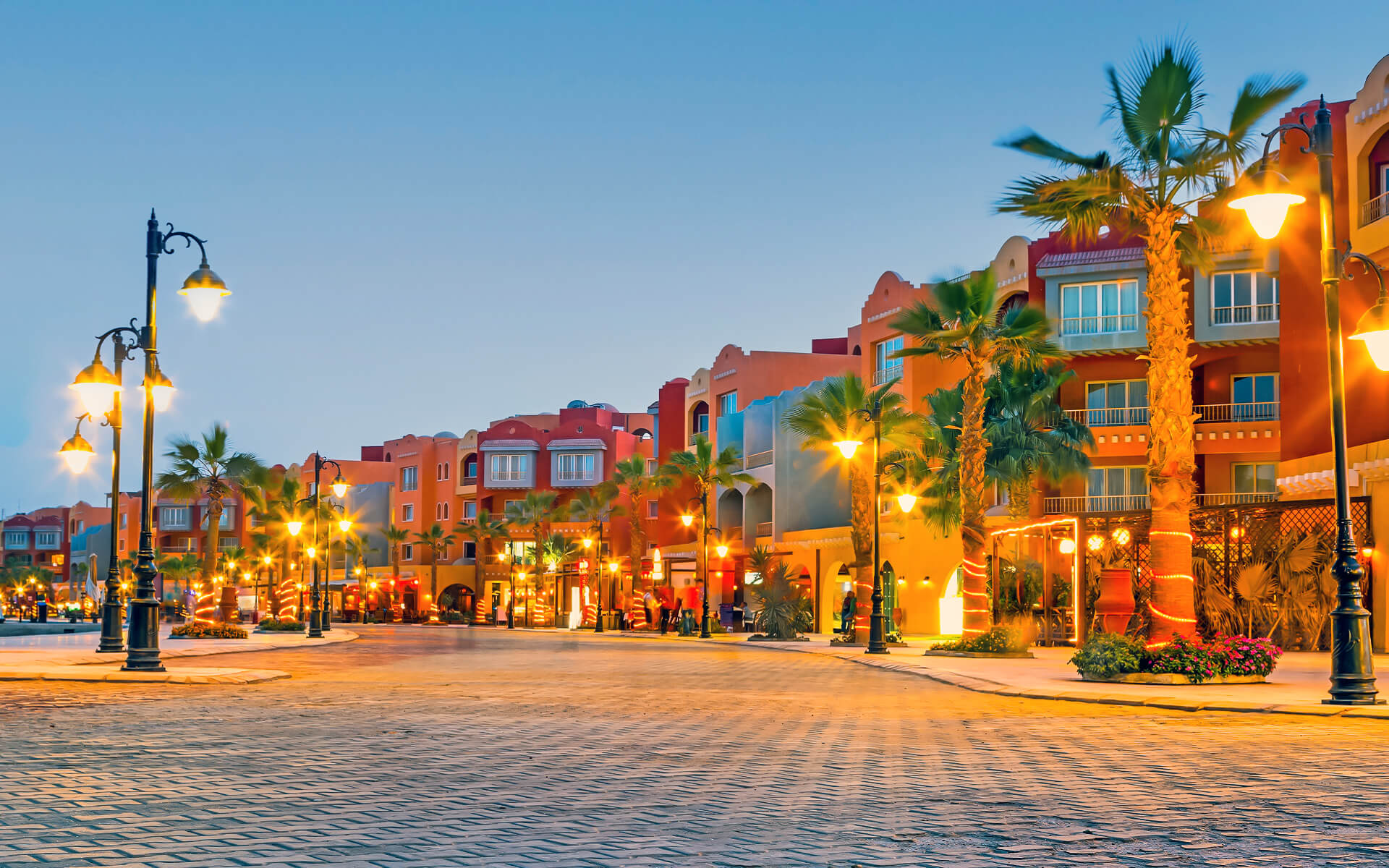 Hurghada is an Egyptian city in the Red Sea Governorate. On the Red Sea coast, it is a major tourist destination and Egypt’s third biggest city (after Suez and Ismailia).

The city was formed in the early twentieth century, and it was a little fishing community until a few years ago. However, since the 1980s, it has been steadily expanded by Egyptian and international investors to become the Red Sea’s major beach resort. Sailors, yachtsmen, scuba divers, and snorkelers may enjoy water sports in holiday communities and hotels. Hurghada is noted for its pleasant weather, watersports, and nightlife. The average daily temperature is about 30 °C (86 °F) during the most of the year. Many Europeans, mostly Germans, Russians, and Italians, spend their Christmas and New Year vacations in the city.

Hurghada runs along the coast for roughly 36 kilometers (22 miles) and does not extend far into the neighboring desert. Egyptian visitors from Cairo, the Delta, and Upper Egypt visit the resort, as do package vacation travelers from Europe, particularly Italians and Germans.

Hurghada used to be a modest, unassuming fishing community on the Red Sea’s edge, with a variety of beautiful beaches. Hurghada is now nearly unrecognizable from its former self, having developed to become Egypt’s most popular tourist destination, with more than 100 different hotels, many of which border the coastline.

Hurghada is known for its excellent diving prospects, and it is particularly tempting to first-time scuba divers who come to marvel at the underwater reefs and amazing marine life. Hurghada is now a major tourist destination, and many visitors combine their stay here with trips to other notable Nile Valley destinations, such as Luxor, which is just a short distance away.

BY PLAINHurghada is accessible through major airports in Europe and the Middle East. Prices vary depending on when you book and the airline. Most major European and Middle Eastern airlines may fly you directly to Hurghada International Airport without stopping in Cairo.If you are in Cairo, you may also...

BY PUBLIC TRANSPORTHurghada has no regular public transportation. Routes for white minivans (Toyota Hiace) known as micro buses have been developed. Locals are the primary users, yet they are simple to utilize. It costs roughly 1-2 Egyptian pounds, and they stop and go anywhere you like, with the exception...

Hurghada now has a population of 248,000 people and is split into three sections:Downtown (El Dahar) is the old part;Sekalla is the city center;El Memsha (Village road) is the modern part.Sakalla is the more basic hotel district. Dahar is home to the town's major market, post office, and long-distance...

Elysees Dream BeachElysees Dream Beach is a private beach that is accessible from 9 a.m. to 7 p.m. and is situated at the boulevard's entrance, only a few meters from from Old Vic Beach. The beach has beautiful sand, mild slopes, and moderate waves. While lounging on the stylish,...

Hurghada has a wide range of cuisines to choose from, including fast food, western restaurants, oriental cuisine, and many more.KFC, McDonald's, and the local fast food chain GAD are all available.Where Sherry Street splits off Sheraton Street, you can have a chicken supper for 14LE at "Brost eldik," a...

Many souvenirs may be purchased from the stores located inside the main town (Sekalla high street) and along the seaside areas. The ancient down town (el Dahar) also has a broad range of bazaars at lower costs than Sekalla.First and foremost, remember to haggle everywhere except restaurants and drugstores....