The northernmost Greek island, Heroditus called “an emerald island – a floating forest”. It is a favorite summer resort of Serbs, Romanians and Turks. who should thank Zeus, for if he had not been of a passionate nature, Thassos might never have been discovered. 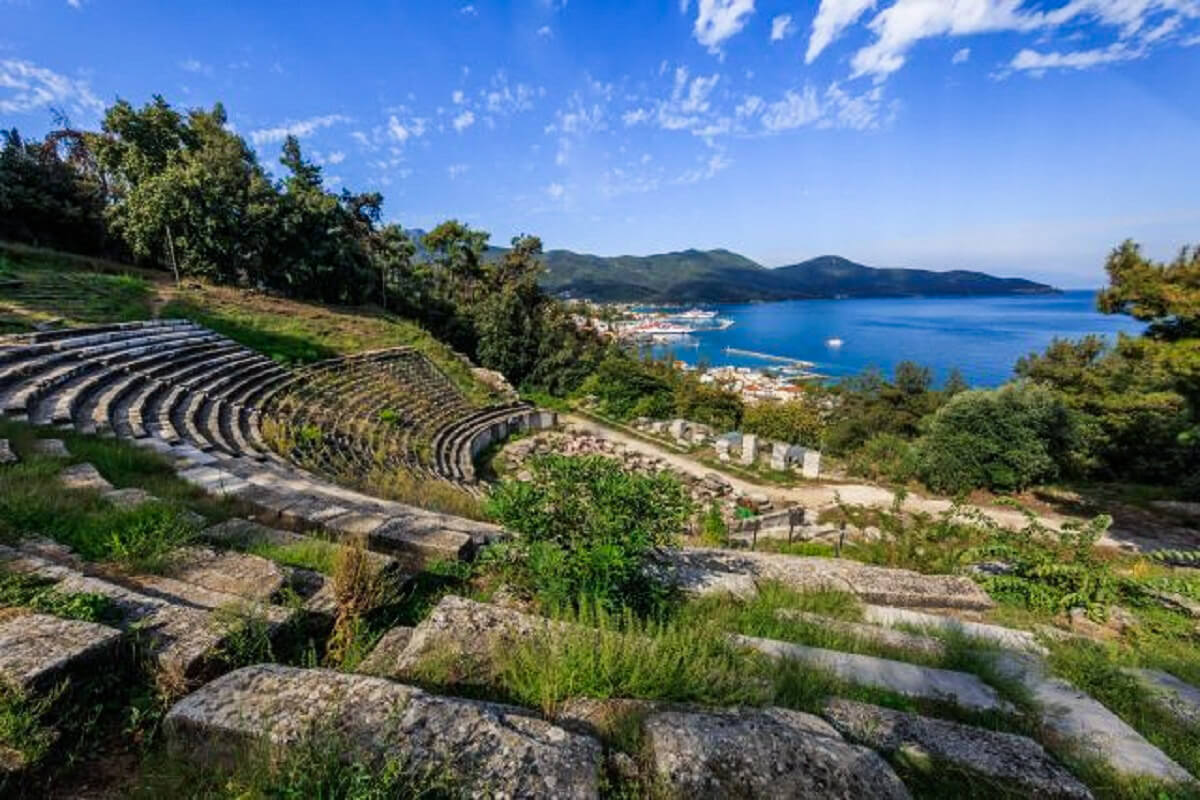 Legend has it that the supreme Greek god Zeus fell in love with beautiful Europe, with the daughter of the Phoenician king Agenor, and so he decided to kidnap her and bring her to Crete. To find his daughter, King Agenor sent his four sons to look for her and ordered them not to return home until they had found her sister. One of his sons, Thassos, was led by a search to a beautiful island in the Aegean Sea, which enchanted him with its lush vegetation. Since he was not allowed to return home without his sister Europa, he decided to stay on this island. Therefore this island has been named after him ever since. 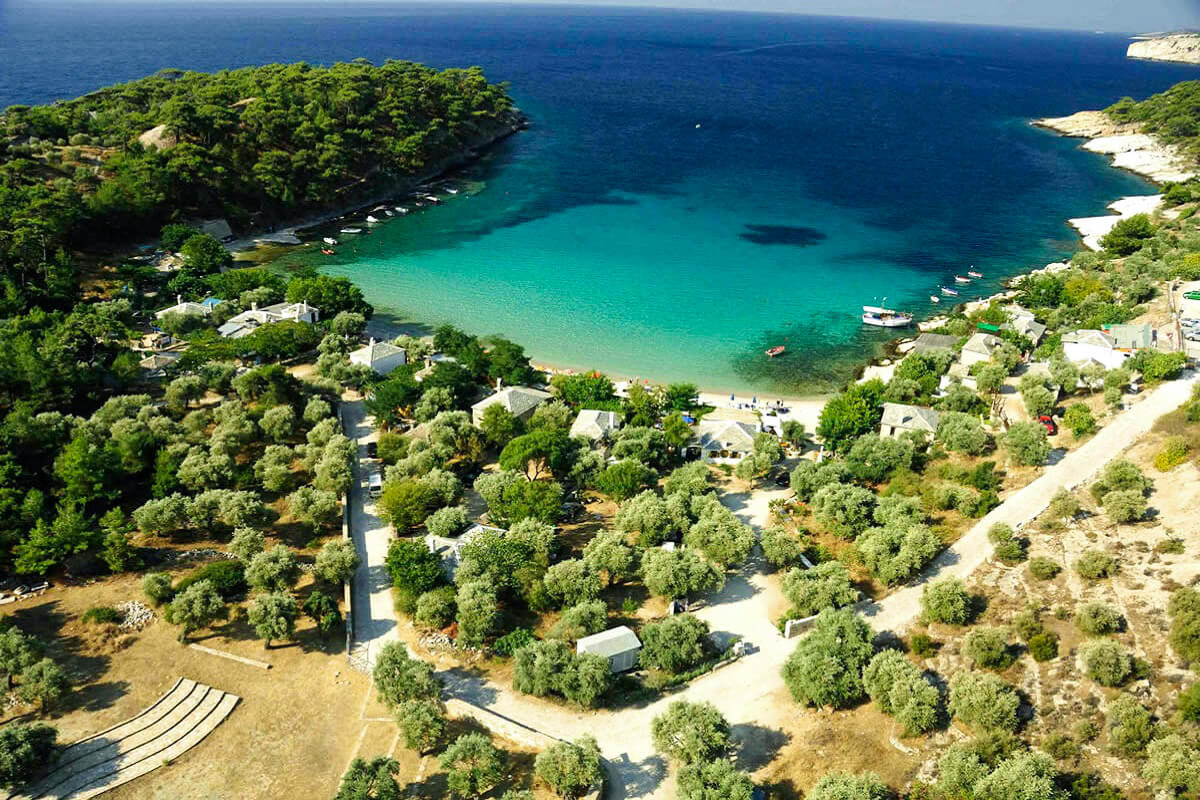 Today, seagulls welcome tourists who arrive on Thassos by ferry from Keramoti. The circumference of the island is only 100 kilometers, so you can quickly go around the whole island. There are no luxury yachts, glamorous restaurants, elite boutiques, rich nightlife on the island, so families with children and people eager for vacation usually rest on Thassos.

One of the greenest Greek islands is no longer so green because of the forest fires that ravaged it in the 1980s. Then new seedlings were planted. Today the island is half under a pine forest and half under olive trees, because the island has more than one million olive trees. This island is also rich in marble, for which it was famous in ancient times. 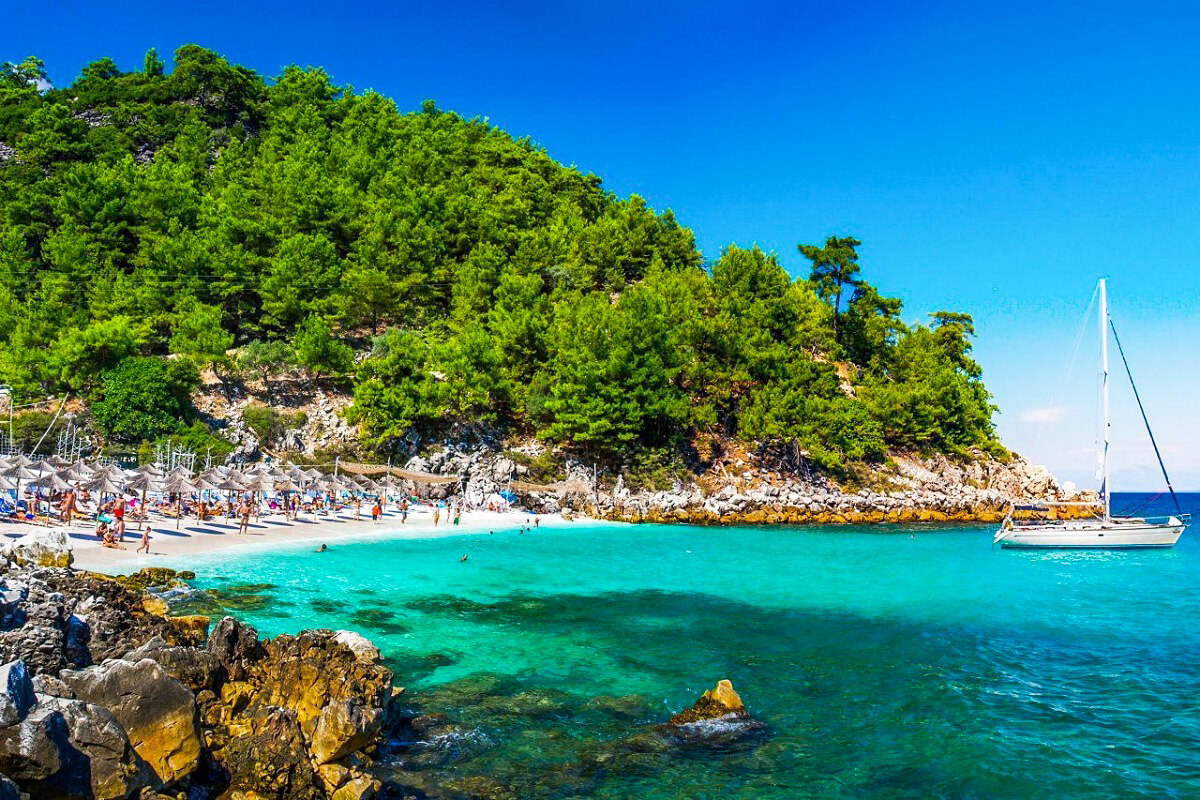 The capital is called Limenas and is only 11 kilometers from the mainland. Although there are remains from ancient times, such as the agora, there are no more imposing ruins. There is an archaeological museum that keeps a collection from the 7th century BC. There is also a 3.5 meter high statue of a young man holding a sacrificial lamb in his hands. 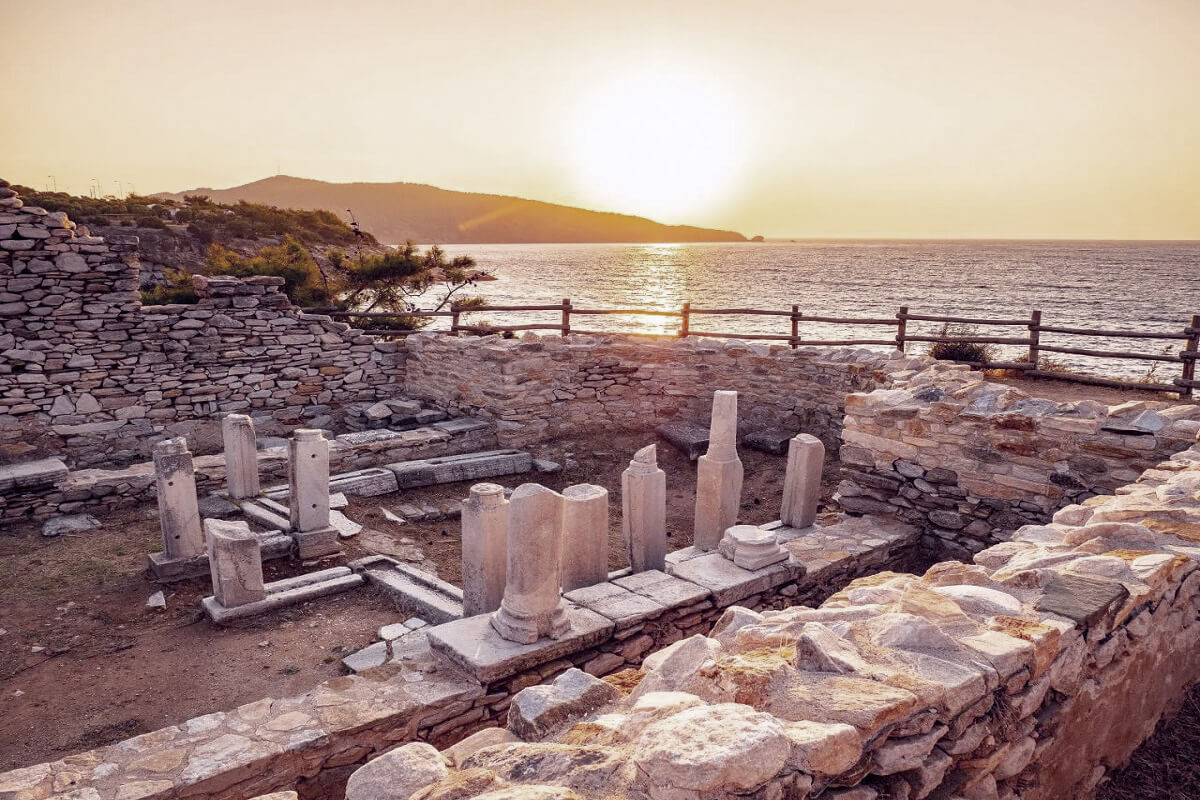 Limenaria is the second largest city and is located in the very south of the island. The trademark of this city is the “yellow palace” on the top of the hill. It is the building of a German company that stayed there until 1963, extracting minerals. Near Limenaria there is another popular tourist destination, the village of Potos.

Panagia is a picturesque mountain village with narrow streets where the oldest inhabitants of the island live. There are many springs with pure water, and nearby is the Dragon’s Cave, named after dragon-like stalactites.

The mountain village of Theologos offers the best lamb on the island. 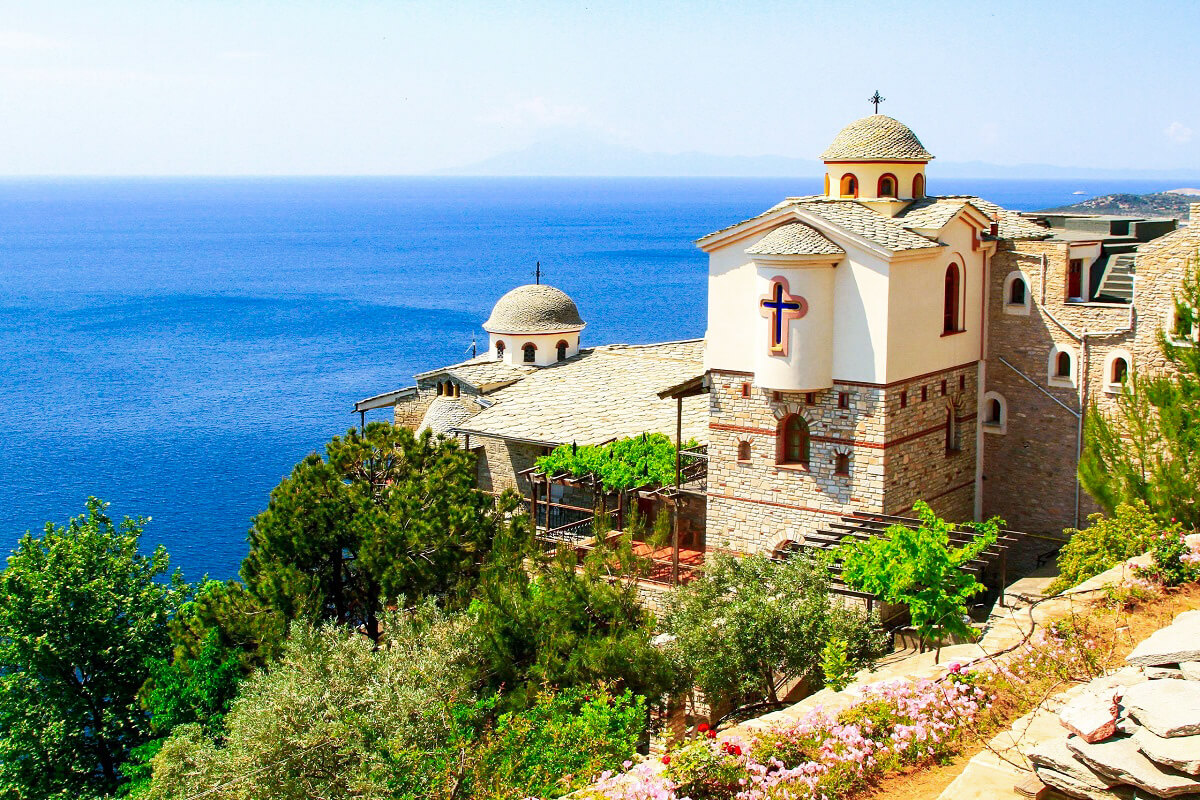 The island is also home to the monastery of Archangel Michael, where one of the nails with which Jesus was nailed to the cross is kept. This monastery was built on the edge of a rock in the 18th century and offers a spectacular view of the sea.

The most beautiful beaches

The marble beach is the most attractive beach on the island, so it is indescribably crowded during the season. The sand is white ostrich with small marble stones, and the sea is turquoise. This fairytale landscape is spoiled by cranes from a nearby marble mine.

Nearby is the beach Vati, which is narrow, wild and disorderly, but it is decorated with a clear turquoise sea. 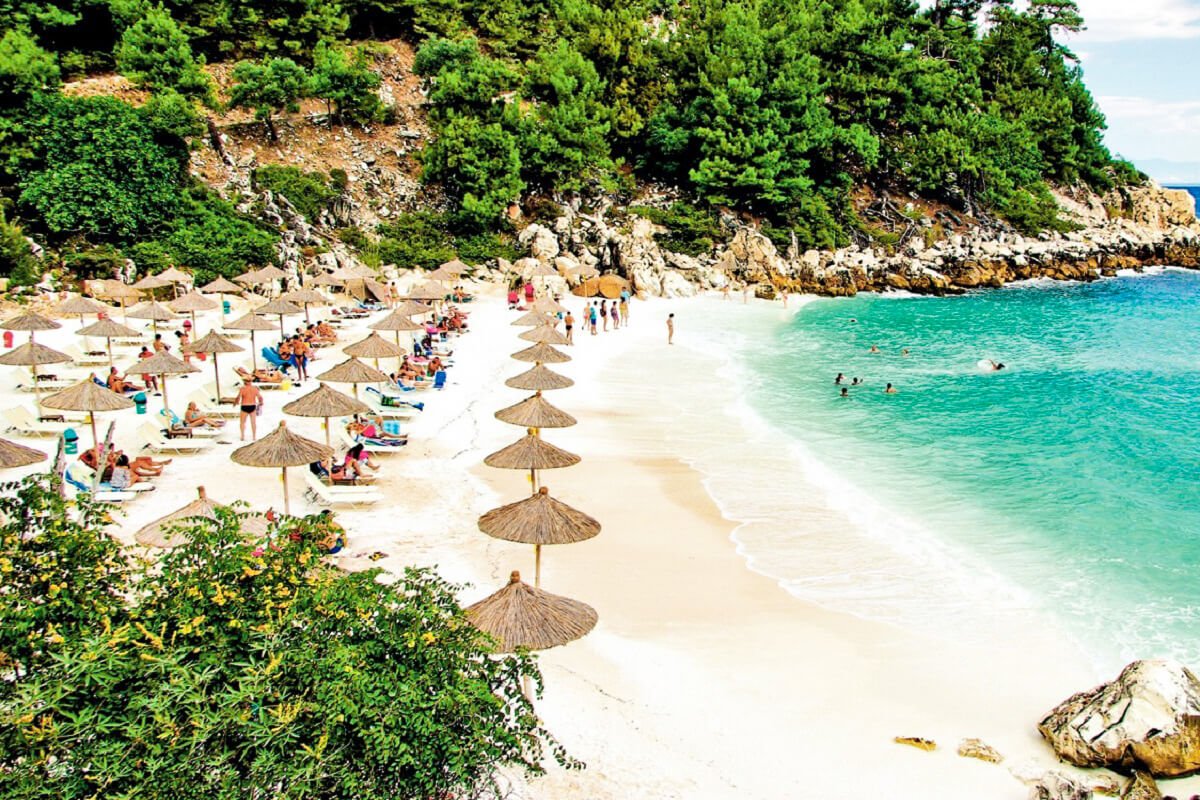 Makriyamos beach is famous for its 1965 bungalows and its lush vegetation. Here rabbits and peacocks run through the complex, the entrance and deck chairs are charged.

Further south is the longest beach on the island, Golden Beach. In the last century it was a paradise for hippies, and today it is a popular destination for families with children because of its long shallows and the many taverns.

The nearest beach is Paradise Beach, the only beach on the island with an official nudist section. 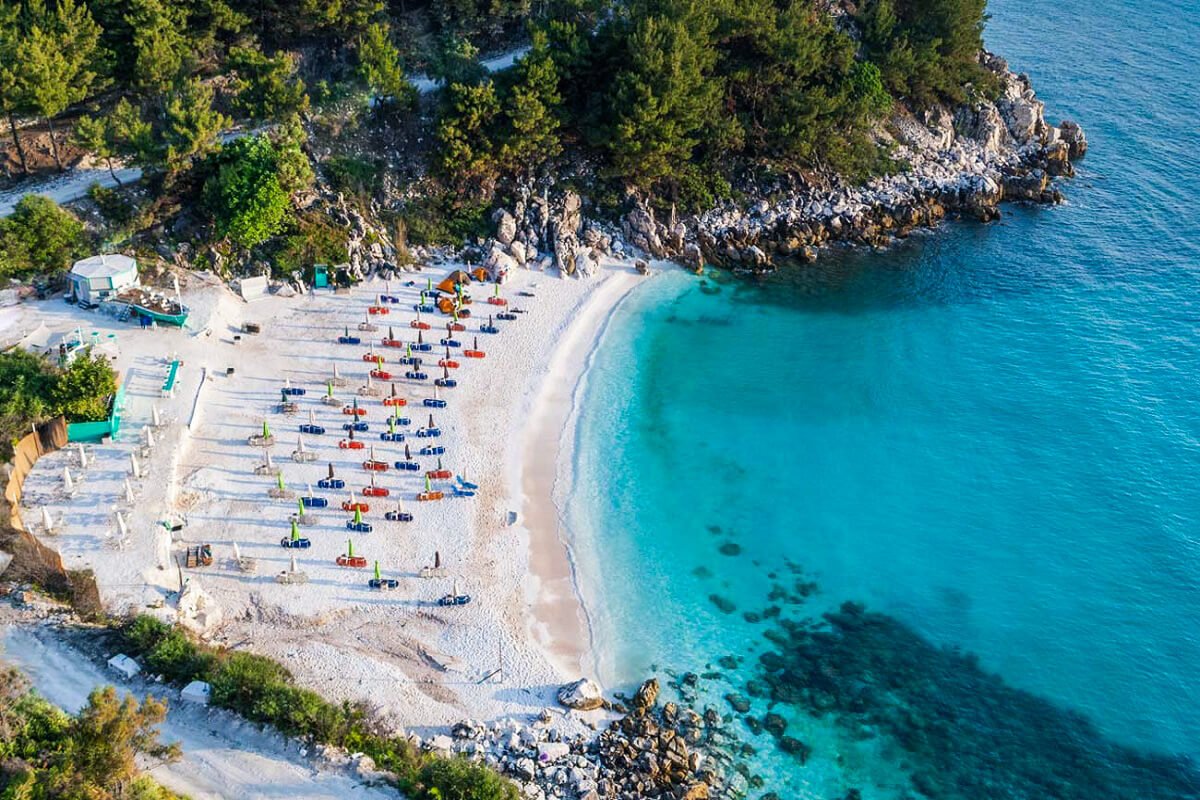 The most beautiful beaches of the island are located in the south. The main tourist attraction is Aliki, a beautiful bay consisting of two beaches. They are called twins. The sand here is as fine as flour. It is a small peninsula with two bays where the remains of an ancient castle from the 7th century BC are located.

Psili Amos, is one of the most beautiful beaches of the island. The water is clean and clear and the sand is very fine. It is a beach with loud music, which makes it very popular with young people. 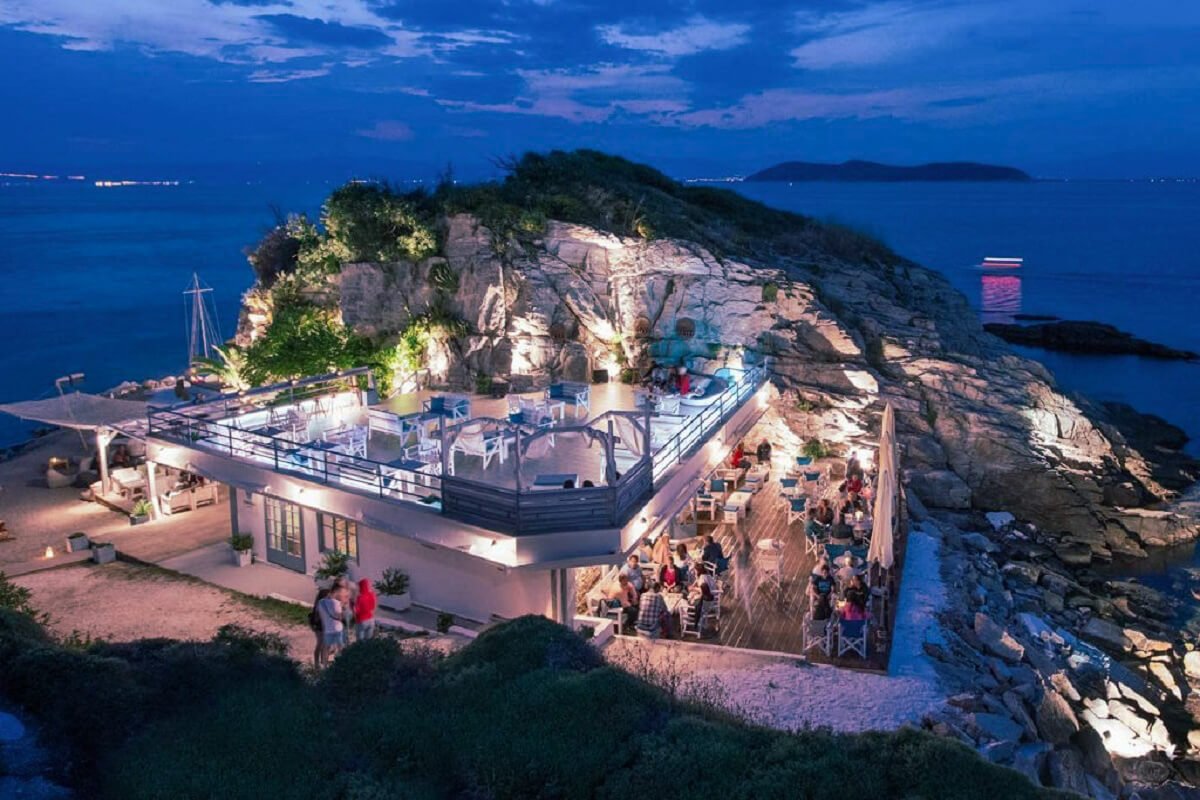 The beach of Pefkari has a blue flag, is decorated and offers a wide range of water sports.

The Tripiti beach is several hundred meters long and is very popular with divers because of its rich underwater life.

Things To Do In Juba