The first record of the existence of a pink lake on Middle Island in Western Australia dates from 1802 by the British navigator and hydrographer Matthew Flinders, who anchored there on his way to Sydney. 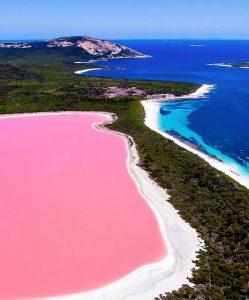 In the 19th century, the island was inhabited by seal and whale hunters, and at the beginning of the 20th century a saltworks was built on the island, but was soon abandoned.

Until today it is not exactly known why the Lake Hiliersee has such a unique pink color that does not change.

In 1950 a group of scientists investigated the causes of the lake color, but the seawater samples did not contain any traces of algae, which normally give water color.

It is believed that the color comes from a high salt content and the presence of salt-loving organisms such as the alga Dunaliella salina and the pink bacterium Halobacteria.

Unlike other pink lakes, which change color depending on changes in temperature, Lake Hiliersee is pink all year round, and the water retains its specific color even when poured into a container.

The lake is surrounded by a forest of eucalyptus and tea trees and separated from the ocean by a narrow area of sand dunes. It is about 600 meters long.

The Pink Lake Hilier is a huge tourist attraction and thanks to its high salt content it would certainly be interesting to swim in it.

The island is only used for research purposes, so swimming is not very common.