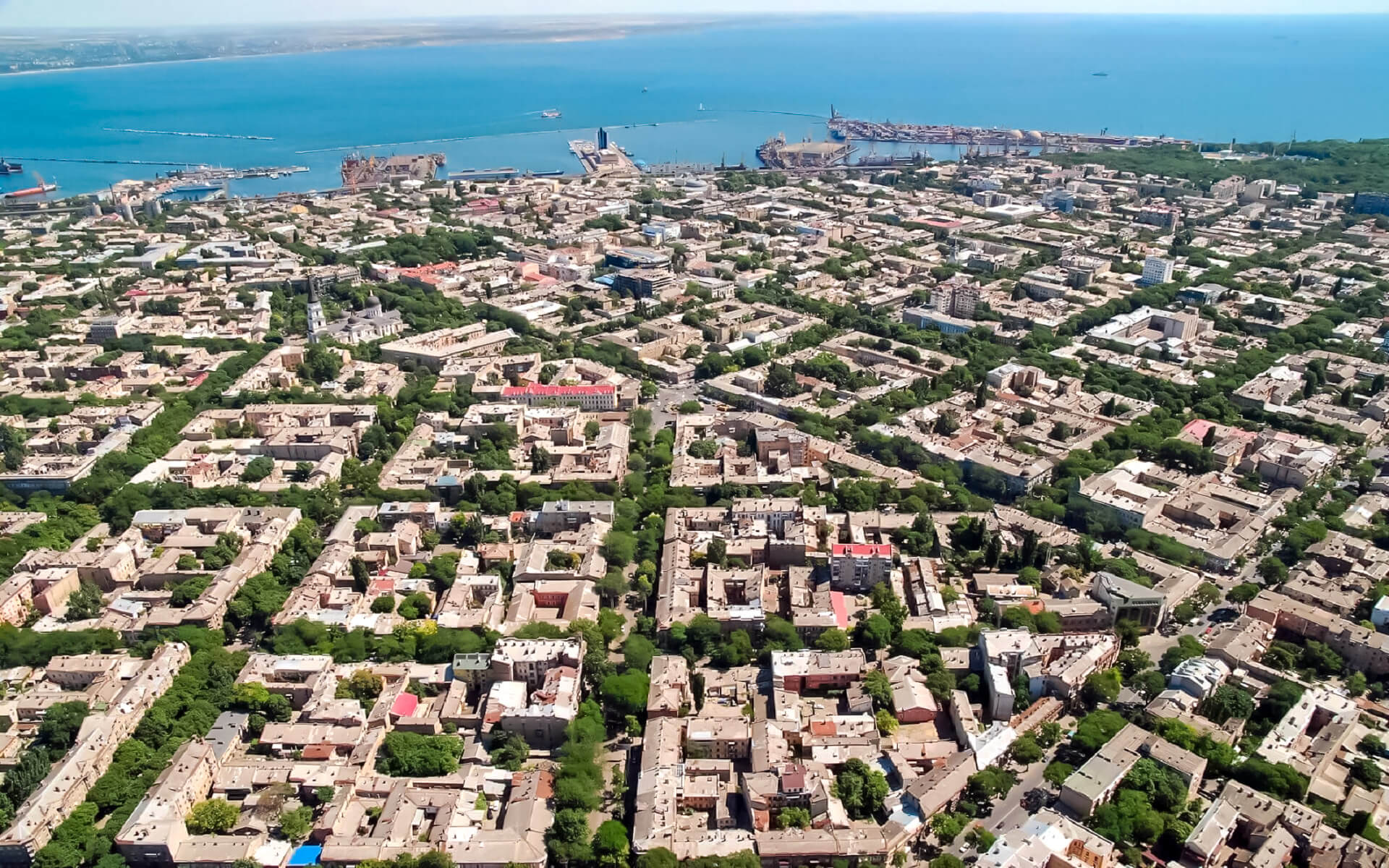 Odessa is an international city in Ukraine and a significant seaport and transportation center situated on the Black Sea’s northwestern coast. Odessa is both the Odessa Oblast’s administrative hub and a multiethnic important cultural center. Odessa is Ukraine’s third most populated city and is also known as the “pearl of the Black Sea,” the “South Capital” (during the Russian Empire and Soviet Union), and “Southern Palmyra.”

Odessa’s forerunner, a tiny Tatar village, was created in 1440 by Hacı I Giray, Khan of Crimea, and was initially known as “Hacbey.” Following a time of Lithuanian sovereignty, it was transferred to the dominion of the Ottoman Sultan in 1529 and remained in Ottoman hands until the Ottoman Empire’s collapse in the Russo-Turkish War of 1792.

Empress Catherine the Great issued a proclamation in 1794 that established the city of Odessa. Odessa was a free port from 1819 until 1858. During the Soviet era, it was the most significant trading port in the Soviet Union, as well as a Soviet naval station. The Quarantine Pier at Odessa Commercial Sea Port was proclaimed a free port and free economic zone for a duration of 25 years on January 1, 2000.

During the nineteenth century, it was Imperial Russia’s fourth biggest city, behind Moscow, Saint Petersburg, and Warsaw. Its historical architecture has a Mediterranean character rather than a Russian design, having been significantly inspired by French and Italian influences. Some structures are constructed in a variety of styles, including Art Nouveau, Renaissance, and Classicist.

Odessa is a port on the Black Sea. Odessa is home to both the Port of Odessa and Port Yuzhne, a substantial oil terminal located on the city’s outskirts. Another significant port is Illichivsk, which is situated in the same region, south-west of Odessa. Together, they form an important transportation hub that connects to trains. Strategic pipes link Odessa’s oil and chemical processing facilities to Russian and European networks.

Odessa is a renowned tourist destination, and there are several therapeutic resorts in and around the city. The Filatov Institute of Eye Diseases and Tissue Therapy in the city is one of the world’s top ophthalmology clinics.

The historic town of Odessa is the most fascinating item to visit. Prior to the revolution and throughout the Soviet Union, the city was a trading hub for the Russian Empire as well as an intellectual and cultural center. Much of the city’s magnificence stems from before the Soviet occupation, and as a result, Odessa is showing its age.

The economic woes that befell the city after the dissolution of the Soviet Union in 1992 have left wide swaths of what was once a beautifully affluent ancient city in shambles. The ancient city, on the other hand, is extremely clean and seems quite secure, making for a fantastic two days of casual unguided strolling, especially with its broad tree-lined avenues and big open parks.

There is a magnificent and lovely Opera house and several really good parks in the considerably smaller and better preserved area of the old town. There is also a lively main street that runs through the center, with individuals selling street wares to visitors.

If you want to take a pleasant route through the city center, try going from Grecheskaya square to Gavannaya st., then onto Gogolya st., at the end of which turn right and you will reach Tyoschin bridge (Mother-in-law bridge). Take a walk over the bridge and along Primorskiy Boulevard. The city hall is located at the end of the boulevard. Turn right and go to the Opera House, from where you may access Deribasovskaya Street. It’s extremely lovely in the evening.

Odessa has a hot-summer humid continental climate (Dfa), which borders on semi-aridity (BSk). This has immensely benefited the city in developing the circumstances essential for the growth of tourism during the last several centuries. Odessa’s environment was thought to be helpful to the body during the tsarist period, thus many affluent but unwell people were transferred to the city to rest and rehabilitate. This led in the growth of a spa culture and a number of high-end hotels in the city. The average yearly temperature of the water is 13–14 °C (55–57 °F), with seasonal temperatures ranging from 6 °C (43 °F) in January to March to 23 °C (73 °F) in August. Typically, the average water temperature in the Gulf of Odessa and city’s bay region reaches 20 °C (68 °F) for a total of four months – from June to September.

Winters in the city are normally dry and pleasant, with temperatures seldom falling below 3 degrees Celsius (27 degrees Fahrenheit). Summers, on the other hand, witness a rise in precipitation, and the city often basks in warm weather, with temperatures frequently reaching the upper 20s and mid-30s. Snow cover is often minimal, and municipal services seldom face the same challenges as in other, more northern Ukrainian towns. This is partly due to Odessa’s warmer winter temperatures and seaside position, which prevent considerable snowfall. Furthermore, the city is not affected by the phenomena of river-freezing.

Odessa is located (46°28′N 30°44′E) on terraced hills overlooking a tiny port on the Black Sea in the Gulf of Odessa, roughly 31 kilometers (19 miles) north of the Dniester river estuary and 443 kilometers (275 miles) south of Kiev, Ukraine. The city’s average elevation is roughly 50 meters (160 feet), with a maximum elevation of 65 meters (213 feet) and a low elevation of 4.2 meters (13.8 feet) above sea level (near the shore). The city now has a land area of 163 km2 (63 sq mi) and a population density of roughly 6,139 people per km2. The Dniester River, from which water is extracted and subsequently cleaned at a processing facility just outside the city, is one of the city’s sources of flowing water. Because the city is in the south of Ukraine, the landscape of the surrounding region is normally flat, with no big mountains or hills for several kilometers. Flora is of the deciduous kind, and Odessa is noted for its gorgeous tree-lined avenues, which made the city a favorite year-round refuge for the Russian nobility in the late nineteenth and early twentieth centuries.

Odessa’s position on the Black Sea coast has also contributed to the city’s thriving tourism economy. The city’s famed Arkadia beach has long been a favorite spot for leisure for both residents and tourists. This is a huge sandy beach situated just south of the city center. Odessa’s numerous sandy beaches are regarded to be fairly distinctive in Ukraine, since the country’s southern coast (especially in Crimea) has seen a proliferation of stoney and pebble beaches.

Odessa’s economy is primarily based on its historic status as a port city. The relatively ice-free port is located near the mouths of the Dnieper, Southern Bug, Dniester, and Danube rivers, which allow excellent access to the hinterland. During the Soviet era (until 1991), the city served as the USSR’s major commercial port; it now serves in a similar capacity as independent Ukraine’s busiest international port. An oil and gas transfer and storage facility, a cargo-handling area, and a huge passenger port are all part of the port complex. The Port of Odessa handled 31,368,000 tonnes of cargo in 2007. Odessa is also one of the most significant Black Sea bases for the Ukrainian Navy. Rail transport is another major component of the Odessa economy, owing to its role in bringing commodities and imports to and from the city’s port.

Fuel refining, machine building, metallurgy, and other forms of light industry such as food preparation, lumber plants, and chemical industry are among the industrial companies situated in and around the city. Agriculture is a rather prominent industry in the city’s surrounding areas. The Seventh-Kilometer Market is a huge commercial complex on the city’s outskirts where private merchants currently run one of Eastern Europe’s biggest market complexes. The market features around 6,000 vendors and 150,000 clients every day. According to the Ukrainian magazine Zerkalo Nedeli, daily sales in 2004 were estimated to reach as high as USD 20 million. The market is also the region’s major employer, employing 1,200 people (mainly guards and janitors). It is owned by Viktor A. Dobriansky, a local land and agricultural entrepreneur, and three of his associates. Tavria-V is Odessa’s most popular store chain. Retail, wholesale, catering, manufacturing, building & development, and private label are all important sectors of business. The high degree of service and the quality of services are primarily responsible for consumer awareness. Tavria-V is the largest private corporation as well as the largest taxpayer.

Deribasivska Street is one of the city’s most prominent commercial corridors, home to many of the city’s boutiques and higher-end stores. In addition, the city has a variety of significant commercial retail centers. The 19th-century retail gallery Passage was the city’s most upmarket shopping area for a long time, and it is still an important monument in Odessa today.

The tourist industry is vital to Odessa, which is presently the second most visited city in Ukraine. In 2003, this industry had a total revenue of 189,2 million UAH. The banking industry is another important part of the city’s economy: the city is home to a branch of the National Bank of Ukraine. The city is home to Imexbank, one of Ukraine’s major commercial banks. Foreign business ventures have thrived in the area, as much of the city and its surrounding area has been declared a free economic zone since January 1, 2000, facilitating the establishment of foreign companies’ and corporations’ Ukrainian divisions and allowing them to more easily invest in the Ukrainian manufacturing and service sectors. To date, a number of Japanese and Chinese companies, as well as a slew of European firms, have invested in the development of the free economic zone. To that end, private investors in the city have poured money into the provision of high-quality office space and modern manufacturing facilities such as warehouses and plant complexes.