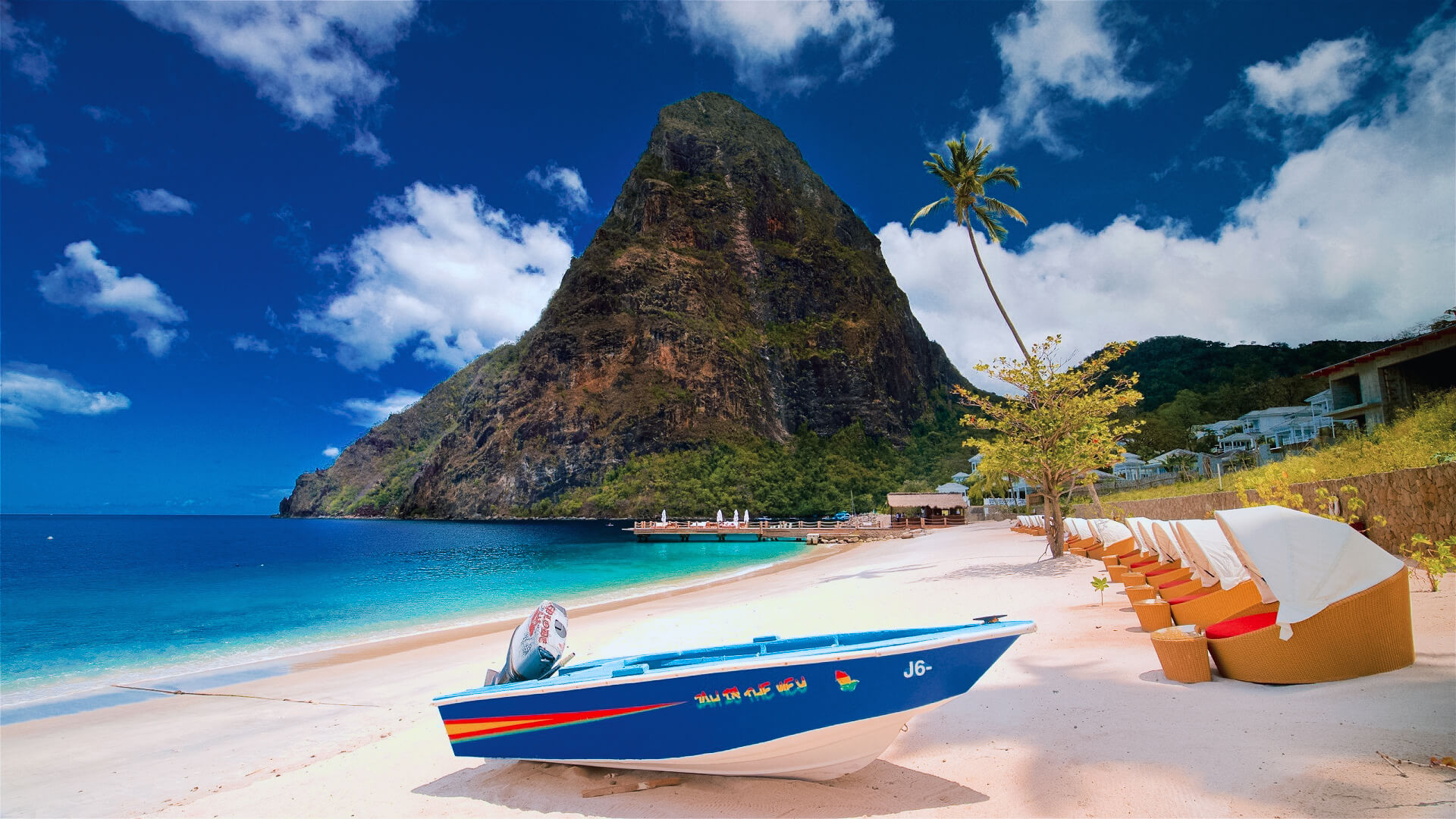 Saint Lucia is a sovereign island nation located in the eastern Caribbean Sea, near the Atlantic Ocean’s border. It is situated north/northeast of Saint Vincent, northwest of Barbados, and south of Martinique. It has a land area of 617 kilometers (238.23 square miles) and a population of 165,595 people as of the 2010 census. Castries is the capital.

The French were the first Europeans to settle on the island. In 1660, they made a pact with the indigenous Carib Indians. From 1663 until 1667, England ruled the island. It was at war with France 14 times in the subsequent years, and the island’s rulers changed often (it was seven times each ruled by the French and British). The British gained full possession of the island in 1814. Saint Lucia was often dubbed the “Helen of the West Indies” due to its frequent transition between British and French rule.

In 1840, representative government was established (with universal suffrage from 1953). The island was a member of the Federation of the West Indies from 1958 to 1962. Saint Lucia became an independent Commonwealth of Nations member state affiliated with the United Kingdom on 22 February 1979. Saint Lucia is a hybrid jurisdiction, which means that its legal system is influenced by both civil and common law. St. Lucia’s 1867 Civil Code was based on the 1866 Quebec Civil Code, augmented with English common law-style laws. Additionally, it is a member of La Francophonie.

Tourism is vital to the economy of Saint Lucia. Its economic importance is expected to increase further as the banana market becomes more competitive. Tourism is most important during the dry season (January to April). St Lucia is popular for its tropical climate and landscape, as well as its many beaches and resorts.

The majority of tourists visit Saint Lucia on a cruise. They spend most of their time in Castries, but Soufriere, Marigot Bay and Gros Islet are also popular destinations.

The volcanic island of St Lucia is more mountainous than most Caribbean islands. The highest point is Mount Gimie, which is 950 metres above sea level. Two other mountains, the Pitons, are the island’s most famous landmarks. They are located between Soufriere and Choiseul on the western side of the island. Saint Lucia is also one of the few islands in the world to have an open-air volcano.

The capital of Saint Lucia is Castries (60,263 inhabitants), where 32.4% of the population live. The main towns are Gros Islet, Soufrière and Vieux Fort.

Saint Lucia had a population of 165,595 in the 2010 census. In 2015, the United Nations Population Division estimated Saint Lucia’s population at 184,999. The country’s population is evenly split between urban and rural areas, with more than a third living in the capital, Castries.

Despite a high rate of emigration, the population is growing rapidly at about 1.2 per cent per year. Emigration from St Lucia is mainly to English-speaking countries, with the United Kingdom receiving almost 10,000 St Lucian-born citizens and over 30,000 people of St Lucian origin. The second most popular destination for Saint Lucian emigrants is the United States, where nearly 14,000 people (both foreign and local) live. A few thousand Saint Lucians live in Canada.

The population of Saint Lucia is predominantly of African and mixed African and European origin, with a small Indian-Caribbean minority (3%). Members of other and unspecified ethnic groups make up about 2% of the population.

About 70 % of the population is Roman Catholic, a legacy of the French colonisation of the island. The remaining 30 % belong to other Christian denominations, including the Seventh-day Adventist Church (7 %), Pentecostals (6 %), Anglicans (2 %) and other Evangelicals (2 %); in addition, about 2 % of the population belong to the Rastafarian movement.

An educated workforce and improved roads, communications, water, sanitation and port facilities have attracted foreign investment in tourism and oil storage and handling. However, with the United States, Canada and Europe in recession, tourism experienced a double-digit decline in early 2009. Recent changes in the European Union’s import preference regime and increasing competition from Latin American bananas have made economic diversification increasingly important in Saint Lucia.

St Lucia has been successful in attracting foreign business and investment, particularly in offshore banking and tourism, which are St Lucia’s main sources of income. The manufacturing sector is the most diversified in the Eastern Caribbean and the government is trying to revive the banana industry. Despite negative growth in 2011, economic fundamentals remain strong and GDP growth is expected to recover in the future.

Inflation has been relatively low, averaging 5.5% between 2006 and 2008. Saint Lucia’s currency is the Eastern Caribbean dollar (EC$), a regional currency shared by members of the Eastern Caribbean Currency Union (ECU). The Eastern Caribbean Central Bank (ECCL) issues the EC$, manages monetary policy, and regulates and supervises commercial banking activities in member countries. In 2003, the government began a major restructuring of the economy, including the removal of price controls and the privatisation of the state-owned banana company.

Food in Saint LuciaLocalFood in St Lucia consists mainly of fresh fruit and vegetables, fish and a variety of curry, jerk, rice and stew dishes. Pot au feu is a delicious stew traditionally from the indigenous cultures of the Caribbean and can be found in many local restaurants in...

Saint Lucia's culture has been influenced by African, Indian, French and English heritage. One of the minor languages is St. Lucian Creole French, which is spoken by almost the entire population.Saint Lucia has the second highest ratio of Nobel laureates to total population of any sovereign country in the...

The earliest known inhabitants of St Lucia were the Arawaks, thought to have arrived from northern South America around 200-400 AD. Numerous archaeological sites on the island have yielded specimens of well-developed Arawak pottery. The Caribs gradually replaced the Arawaks in the period from 800 to 1000 AD.The first...

Stay Safe in Saint LuciaSt Lucia is not an incredibly dangerous place, but the rates of murder, rape and assault have risen dramatically in recent years. You should exercise the same caution that you would at home. Also, try to stay in groups and be careful in remote areas....