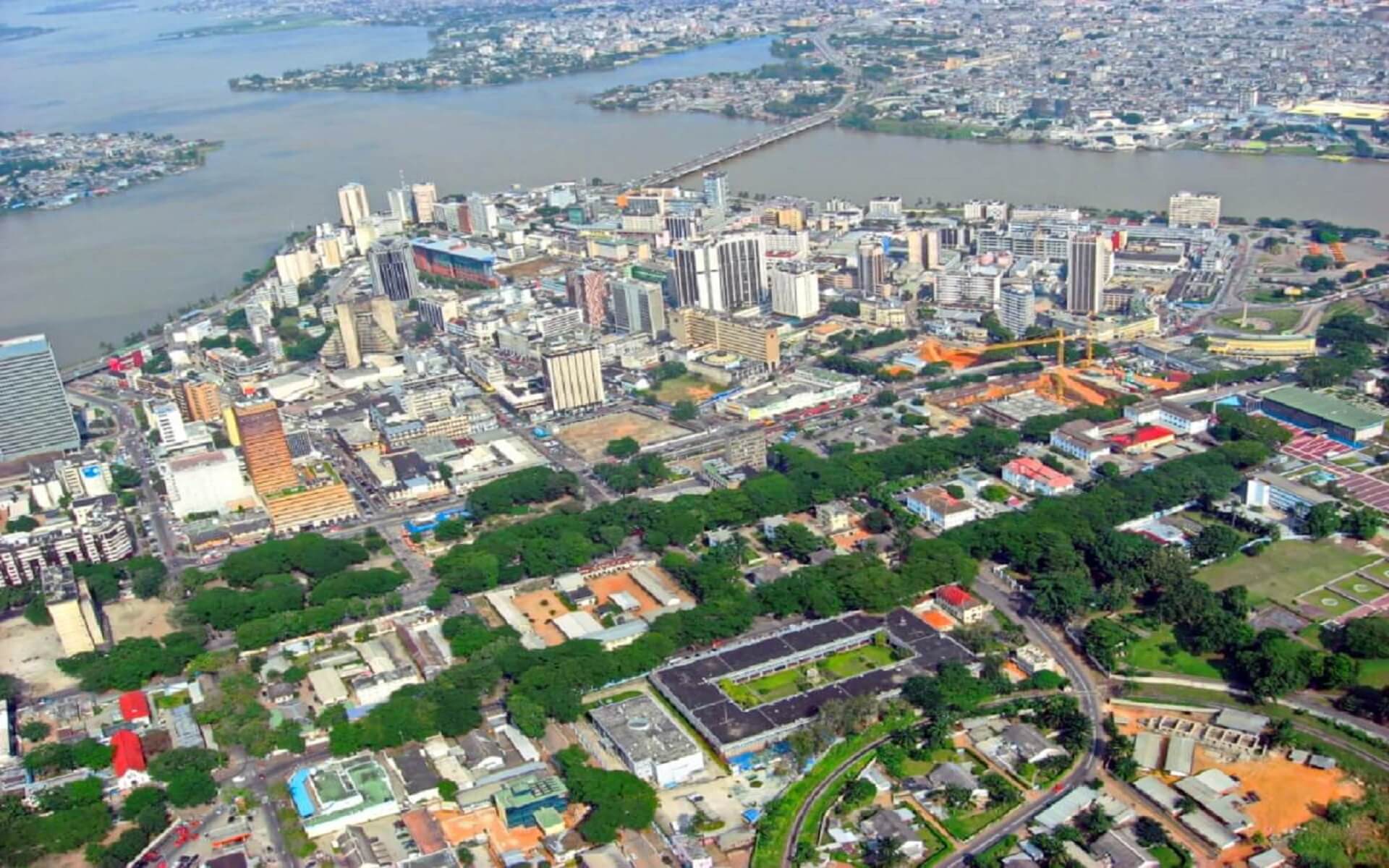 Ivory Coast, formally known as the Republic of Côte d’Ivoire (French: République de Côte d’Ivoire), is a West African country. The political capital of Ivory Coast is Yamoussoukro, and the port city of Abidjan is the country’s economic and biggest metropolis. Guinea and Liberia border it on the west, Burkina Faso and Mali on the north, and Ghana on the east. South of Ivory Coast is the Gulf of Guinea (Atlantic Ocean).

Prior to European colonialism, Ivory Coast was home to a number of nations, including Gyaaman, the Kong Empire, and Baoulé. During the French colonial period and after independence, two Anyi kingdoms, Indénié and Sanwi, tried to maintain their distinct identities. During the European race for Africa, the Ivory Coast became a French protectorate in 1843–44 and was later turned into a French colony in 1893. Ivory Coast gained independence in 1960, and Félix Houphout-Boigny governed the country until 1993. It maintained tight political and economic relations with its West African neighbors while also keeping close ties with the West, particularly France. Ivory Coast has suffered one coup d’état, in 1999, and two religion-based civil conflicts since the end of Houphout-reign Boigny’s in 1993. The first occurred between 2002 and 2007, and the second between 2010 and 2011.

Ivory Coast is a republic in which the President has considerable executive power. During the 1960s and 1970s, the country was an economic powerhouse in West Africa due to the production of coffee and cocoa. In the 1980s, Ivory Coast had an economic crisis, which contributed to a period of political and social unrest. In the twenty-first century, the Ivorian economy is primarily market-based and remains highly reliant on agriculture, with smallholder cash-crop production dominating.

The official language is French, although local indigenous languages such as Baoulé, Dioula, Dan, Anyin, and Cebaara Senufo are also commonly spoken. Ivory Coast is home to about 78 different languages. Islam, Christianity (mainly Roman Catholicism), and numerous indigenous faiths are the major religions.

The Ivory Coast is a nation located in western Sub-Saharan Africa. It is bounded on the west by Liberia and Guinea, on the north by Mali and Burkina Faso, on the east by Ghana, and on the south by the Gulf of Guinea (Atlantic Ocean). The nation is located between the latitudes of 4° and 11°N and the longitudes of 2° and 9°W. Around 64.8 percent of the land is agricultural land, with arable land accounting for 9.1 percent, permanent pasture accounting for 41.5 percent, and permanent crops accounting for 14.2 percent. Water contamination is one of the most serious problems confronting the country today.

According to a government study conducted in 2012, the fertility rate was 5.0 children born per woman, with 3.7 born in urban areas and 6.3 born in rural regions.

Since Ivory Coast has established itself as one of the most prosperous West African countries, workers from neighboring Liberia, Burkina Faso, and Guinea account for about 20% of the population (3.4 million).

Non-African ancestry accounts for around 4% of the population. Many are French, Lebanese, Vietnamese, and Spanish nationals, as well as American and Canadian Protestant missionaries. Due to assaults by pro-government youth militias, about 10,000 French and other foreign people were forced to flee Ivory Coast in November 2004. In addition to French nationals, there are native-born descendants of French immigrants who came during the country’s colonial era.

The primary faiths of Ivory Coast are Islam (nearly mostly Sunni Muslims, with some Ahmadi Muslims) and Christianity (mainly Roman Catholic, with a lesser number of Protestants, especially Methodists). Muslims rule the north, while Christians rule the south. According to US Department of State estimates, Christians and Muslims each made up 35 to 40% of the population in 2009, while traditional (animist) faiths were practiced by an estimated 25% of the population.

Yamoussoukro, the capital of Ivory Coast, is home to the world’s biggest church edifice, the Basilica of Our Lady of Peace of Yamoussoukro.

Ivory Coast has a relatively high per capita GDP for the area (US$1014.4 in 2013) and plays an important role in transit commerce for neighboring, landlocked nations. The nation has the biggest economy in the West African Economic and Monetary Union, accounting for 40% of the overall GDP of the monetary union. The nation is the world’s biggest exporter of cocoa beans, as well as the fourth-largest exporter of commodities in Sub-Saharan Africa in general (following South Africa, Nigeria, and Angola).

Maintaining strong connections with France since independence in 1960, diversifying agriculture for export, and encouraging international investment have all contributed to Ivory Coast’s economic development. In recent years, Ivory Coast’s main agricultural products, coffee and cocoa, have seen increased competition and decreasing pricing on the worldwide market. This, combined with high internal corruption, makes life difficult for growers, exporters, and laborers, as instances of indentured labor have been reported in the cocoa and coffee production in every edition of the U.S. Department of Labor’s List of Goods Produced by Child Labor or Forced Labor since 2009.

With the exception of South Africa, most African economies have not developed faster since independence. One potential explanation for this is the taxation on export agriculture. Ivory Coast and Kenya were outliers because their monarchs were major cash-crop producers, and the newly independent nations refrained from imposing punitive rates of taxes on export agriculture, resulting in thriving economies.

Things To Know Before Traveling To Ivory Coast

All visitors to Côte d’Ivoire who are not CEFA nationals must acquire a visa prior to arrival. The application procedure is entirely online at the official visa website.Official website for visas.

Although French is the official language, there are over 60 indigenous languages. Dioula is the most commonly spoken. Additionally, Hamdunga, Loftus Africanus, Gigala, Oloofid, and Ulam are indigenous languages. However, one cannot live without French for an extended period of time. Additionally, business travelers need fluency in French in order to complete any little transaction.

Although the nation was formerly referred to in English as “Ivory Coast,” it has asked to be referred to as “Côte d’Ivoire” (the equivalent in French). For an English speaker, pronouncing it “Coat di-VWAR” is near enough.

By planeThe Felix-Houphouet-Boigny International Airport offers daily scheduled flights from and to Paris with Air France and Brussels with Brussels Airlines. Flights to other West African cities are also available on a regular basis. The airport is a modern facility, and enhanced security has helped to dispel its previous...

Côte d'Ivoire is known for its beautiful beaches, tourist towns, rainforests, and wildlife preserves.Taï National Park is home to West Africa's biggest tropical rainforest.Comoë National Park is Côte d'Ivoire's largest and most well-known national park. Birds, elephants, giraffes, lions, monkeys, and antelopes are among the animals that live there.

Food in Ivory CoastGood food is inexpensive, and Abidjan has a number of excellent eateries. You should obtain a Hepatitis A vaccination before going, although even street food is very clean. Garba, alloco, and attiéké are some of the national foods to try. Alloco consists of fried plantains served...

MusicEach ethnic group in Ivory Coast has its own musical genre, with the majority exhibiting extensive vocal polyphony. Additionally, talking drums are widespread, particularly among the Appolo, and polyrhythms, another African feature, are found across Ivory Coast, but are particularly prevalent in the southwest.The Ivory Coast's popular music genres...

Land migrationHuman remains have not been well preserved in Ivory Coast's humid environment, making it impossible to identify the country's earliest human presence. Newly discovered weapon and tool pieces (particularly, polished axes cut through shale and cooking and fishing remains) have been interpreted as a potential evidence of a...

Stay Safe in Ivory CoastCôte d'Ivoire's northern areas are prone to political instability and violence, so it's a good idea to check with your embassy or ask other travelers about the situation before heading interior.At this time, the Foreign and Commonwealth Office of the United Kingdom, as well as...