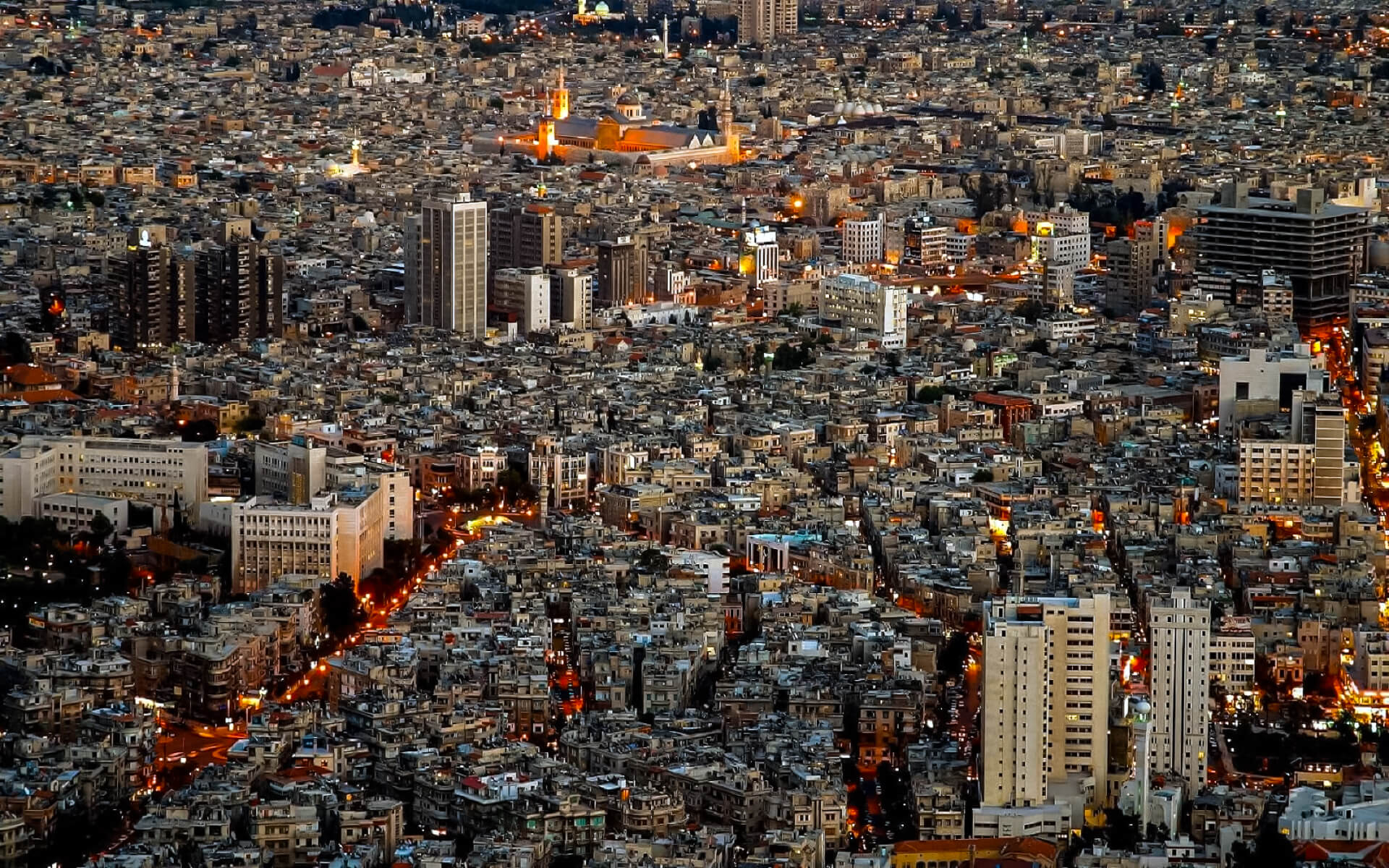 Damascus is Syria’s capital and the second-largest city after Aleppo.

Damascus is not only one of the world’s oldest continually inhabited cities, but it is also a key cultural and religious hub in the Levant. The city has a population of around 1,711,000 people.

Damascus is the center of a densely populated metropolitan region with a population of 5 million people. Damascus’ metropolitan area includes the cities of Douma, Harasta, Darayya, Al-Tall, and Jaramana.

Damascus, which was founded between 10,000 and 8,000 BC, is regarded as the world’s oldest continuously inhabited city. The world heritage-listed old-walled city, in particular, has a very ancient air to it and is mostly made up of a network of small lanes broken with cryptic entrances leading into attractive, lush courtyards and blank-faced dwellings. The ancient city still has an original medieval air to it, albeit this is quickly fading owing to increased tourist traffic as the area is promoted as an attraction. However, life continues in the old-walled city, which remains the city’s religious and social center.

The Souq al-Hamidiyya, a spacious bazaar lined with small shops, is accessed by columns from a Roman temple erected on the site of an even earlier temple. The souqs itself smell of cumin and other characteristic scents, and sections devoted to anything from leather and copper products to inlaid boxes and silk scarves may be found.

At the end of Souq al-Hamidiyya sits the enormous Umayyad mosque, an architectural marvel with three minarets. It was an Assyrian temple, then a Roman Jupiter temple, then a church when Rome converted to Christianity, then a mosque and a church combined, and ultimately a mosque till today. All of the symbols are still in place, and some Christian artwork can be seen on the inner walls. Inside the main chamber of the mosque lies the burial of John the Baptist (for Muslims, prophet Yahya). Women are encouraged to cover their hair, arms, and legs. Abayas (full-body wraps) are given for the admission fee of 50SP. It is one of Islam’s holiest places, and international visitors are permitted to go around the prayer area.

The Citadel is a fort-like part of the surviving city wall at the opposite end of Souq al-Hamidiyya (but be sure to visit Aleppo’s Citadel for a really wonderful experience).

Nearby, you may see the Mausoleum of Salah al-Din, often known as Saladin in the West, the greatest anti-crusader. There’s a fantastic statue of him on horseback right next to the citadel that will take your breath away. There are two disappointed Frankish warriors under the horse’s slightly elevated tail if you go all the way around it. Inscriptions identify these two knights as Guy de Lusignan, King of Jerusalem, and Reynald de Chatillon, Lord of Kerak, an important castle in the Holy Land. Both were caught at Salah al-decisive Din’s victory at Hattin; Guy was imprisoned and subsequently freed in Damascus, while Reynald was killed as retribution for his many misdeeds.

Because to the rain shadow effect of the Anti-Lebanon mountains and the prevailing ocean currents, its climate is characterized as cool steppe climate.

Summers are hot and dry, with little humidity.

Winters are chilly and wet, with little snowfall. From October to May, the annual rainfall is roughly 130 mm (5 in).

Damascus was built in a strategic location on a plateau 680 meters (2,230 ft) above sea level and about 80 kilometers (50 miles) inland from the Mediterranean, sheltered by the Anti-Lebanon mountains, watered by the Barada River, and at a crossroads between trade routes: the north/south route connecting Egypt with Asia Minor, and the east-west cross-desert route connecting Lebanon with the Euphrates river valley.

Damascus’ ancient city, surrounded by city walls, is located on the south bank of the river Barada, which is almost dry (3 cm (1 in) remaining). To the south-east, north, and north-east, it is bordered by Middle-Eastern-era suburbs: Midan in the south-west, Sarouja and Imara in the north and north-west. These communities sprung up along routes heading out of town, around the graves of religious dignitaries.

Damascus’ historical status as an important trading hub has shifted in recent years as a result of regional political developments as well as the advancement of contemporary commerce.

Damascus’ tourist business has a lot of promise, but the present civil conflict has limited these chances. Damascus’ abundant cultural endowment has been discreetly exploited since the late 1980s with the building of several lodging and transit businesses, as well as other associated projects. Numerous boutique hotels and busy cafés have arisen in the ancient city during the early 2000s, attracting both European visitors and Damascenes.

The bulk of industries are operated by the state, although partial privatization, as well as economic activities led by the private sector, were authorized beginning in the early 2000s with trade liberalization. In the ancient city, traditional handcrafts and artisan copper engravings are still made.

The Damascus stock market officially started for business in March 2009, and it is Syria’s sole stock exchange.

Most hotels can arrange international phone calls, but the rates are exorbitant. Most internet cafés are set up for VOIP and provide a more cheaper option, albeit the pricing does reflect the connection quality.

Although Internet connection is generally accessible, the Syrian government filters traffic, which may create some odd connectivity glitches.

Guayaquil, formally Santiago de Guayaquil, is Ecuador’s biggest and most populous city, with around 2.69 million residents in the metropolitan area, as well as...
Read more

Tanzania, formally known as the United Republic of Tanzania, is a vast nation in Eastern Africa that is part of the African Great Lakes...
Read more

Yemen, formally known as the Republic of Yemen, is an Arab nation in Western Asia that occupies the Arabian Peninsula’s southernmost tip, South Arabia....
Read more

Bangor is a tiny coastal city in North Wales that is a gorgeous city with views of the Menai Straits (particularly beautiful at sunset)...
Read more

Brighton is a beach resort in East Sussex, England, and the major portion of the City of Brighton and Hove. Brighton is part of...
Read more