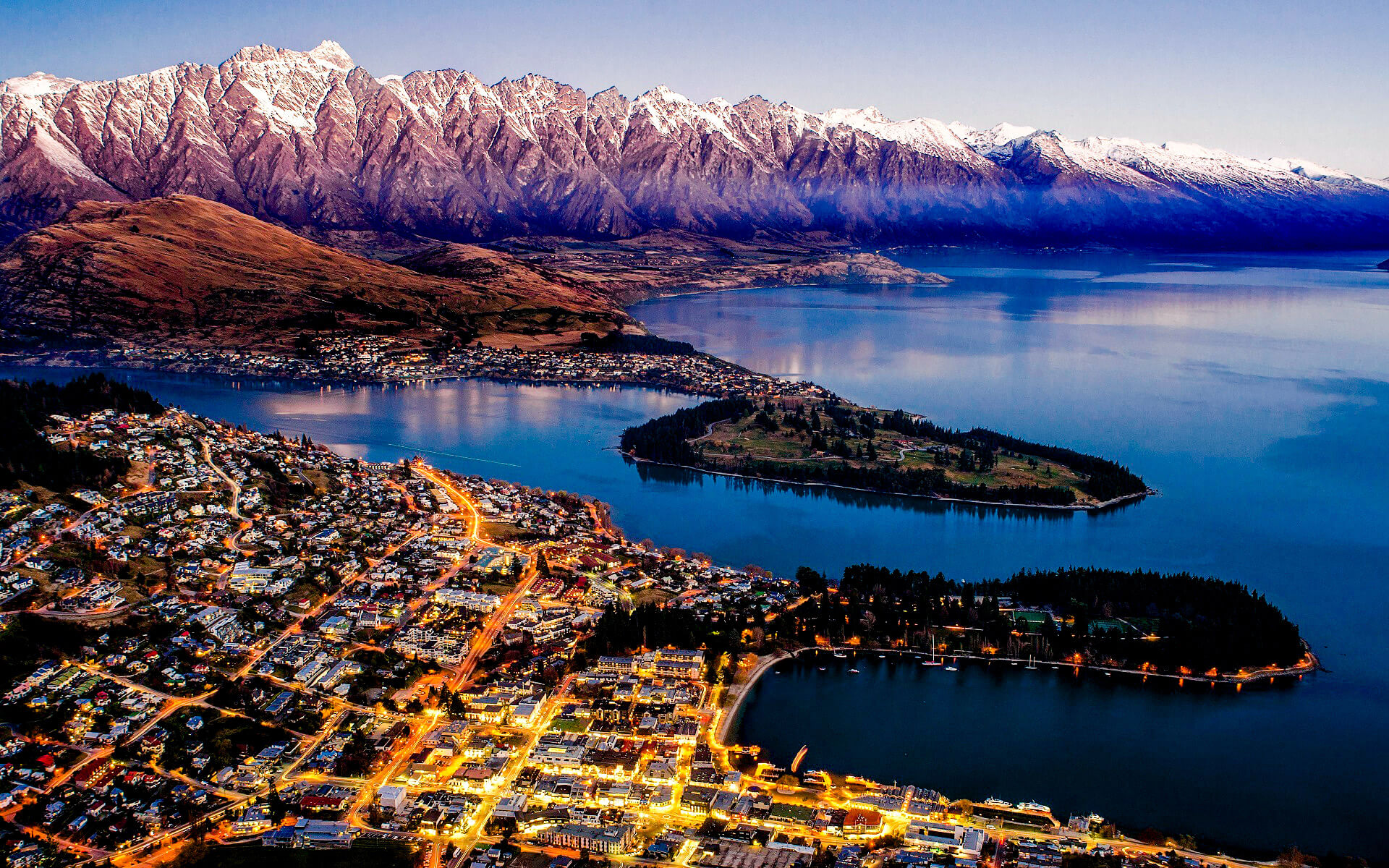 Queenstown is a tourist town in the Otago region of New Zealand’s South Island.

It is situated around Queenstown Bay on Lake Wakatipu, a long narrow Z-shaped lake produced by glacial processes, and provides beautiful views of adjacent mountains such as The Remarkables, Cecil Peak, Walter Peak, and Ben Lomond and Queenstown Hill directly above the town.

Queenstown has a population of 13,150 people (as of June 2015), making it the 29th biggest urban area in New Zealand and the third largest in Otago, behind Dunedin and Oamaru.

The Queenstown-Lakes District has a total land area of 8,704.97 square kilometers (3,361.01 square miles), not including its three inland lakes (Lake Hwea, Lake Wakatipu, and Lake Wanaka). The region’s population is projected to be 32,400 people (June 2015 estimate). Arrowtown, Glenorchy, Kingston, Wanaka, Alexandra, and Cromwell are nearby towns. Dunedin and Invercargill are the closest cities. Queenstown is well-known for its commercial tourism, particularly adventure and ski tourism.

Queenstown is a world-famous resort town on New Zealand’s South Island. The village is located on the shores of Lake Wakatipu, surrounded by the Southern Alps.

What was originally a tiny, secluded South Island village has evolved since the 1980s, first into a popular ski resort, and now into a year-round tourist attraction and adventure tourism hub. It is a world-renowned attraction, receiving around 1.9 million tourists each year, and is unquestionably the tourism capital of the South Island, if not New Zealand, and a must-see stop for the majority of visitors to New Zealand.

Situated on the banks of Lake Wakatipu, one of Otago and New Zealand’s most gorgeous lakes, and surrounded by mountains, it’s easy to understand why its breathtaking beauty attracts visitors all year. Queenstown gladly accommodates all tourists, offering a wide choice of sights, activities, lodging, and dining options to suit any budget, from backpackers to five-star luxury. This prominence, however, is not without drawbacks; in many ways, Queenstown may be a tourist trap. However, for those willing to explore, fair pricing and a few deals may be discovered.

Queenstown is a lively town all year, but it is especially busy in the summer and during the ski season. There is a thriving nightlife in the town’s tiny center district, which is densely packed with pubs and restaurants. If you want to obtain a decent night’s sleep, you might consider staying somewhat outside of town. Up to 05:00 a.m., it is normal to see people on the streets returning from a disco or a tavern. Wanaka (just over an hour away) is smaller and more serene, with less of a frenzied adolescent party vibe, if you’re seeking for a calm picturesque break.

It has an oceanic climate due to its relatively low elevation (310 meters) yet high mountain environs. Summers have long sunny days with temperatures reaching 30 °C, but winters are chilly with temperatures typically in the single digits and periodic snowfall, despite the fact that there is no permanent snow cover throughout the year. Queenstown, like the rest of Central Otago, is in the rain shadow of the Southern Alps, but since it is closer to the west coast, it is more vulnerable to rain-bearing fronts than adjacent Cromwell, Wanaka, and Alexandra. The highest temperature ever recorded in Queenstown is 34.1 °C (93 °F), while the lowest is 8.4 °C (17 °F).

Queenstown is located on the shores of Lake Wakatipu, New Zealand’s third biggest lake by surface area. It lies at a relatively low height for a ski and snowboarding center, barely 310 meters above sea level, on the lake’s shoreline yet snuggled amid mountains, with nearby gorges and agricultural plains.

There are various internet cafés in Queenstown that provide low-cost services. Some hotels charge a lot for internet access, while others provide it for free. Wi-Fi is available throughout much of town. Purchase a prepaid card at a low cost.