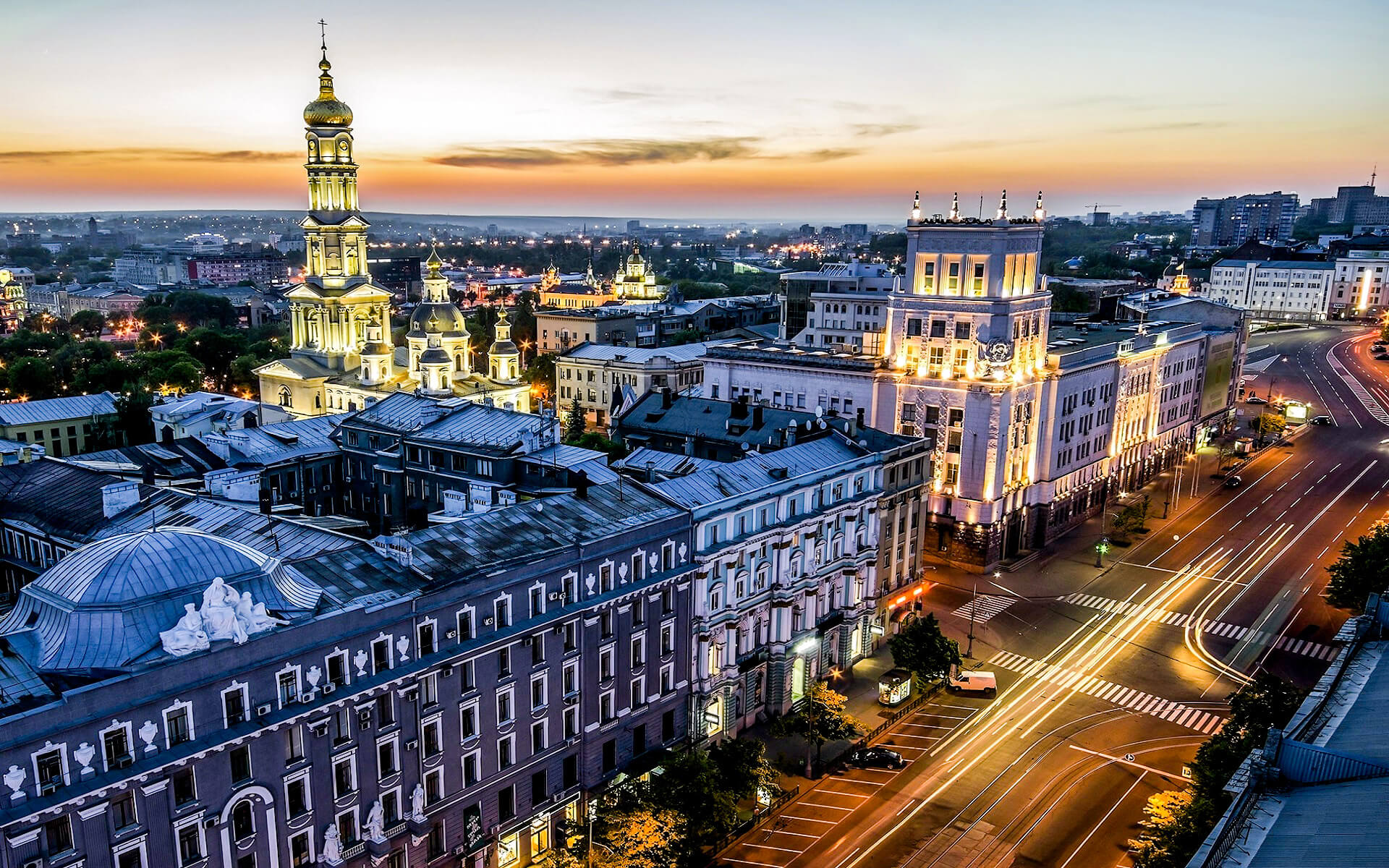 Kharkiv is Ukraine’s second-largest city. It is the biggest city in the Slobozhanshchyna historical area and is located in the country’s north-east. The population of the city is around 1.5 million people. Kharkiv is the administrative center of the Kharkiv Oblast and the Kharkiv district.

The city was built in 1654 and expanded from a minor fortification to become a significant center of Ukrainian industry, commerce, and culture under the Russian Empire.

Kharkiv served as the first capital of the Ukrainian Soviet Socialist Republic from December 1917 until January 1935, when it was transferred to Kiev.

Its industry is mostly focused on equipment and electronics. The city is home to hundreds of industrial companies, including the Morozov Design Bureau and the Malyshev Tank Factory (world leaders in tank production from the 1930s to the 1980s); Khartron (aerospace and nuclear power plant automation electronics); Turboatom (turbines for hydro-, thermal-, and nuclear-power plants); and Antonov (the multipurpose aircrafts manufacturing plant).

Kharkiv is one of Ukraine’s most important cultural centers. It is home to more than 20 museums, over ten theaters, and a handful of art galleries. Almost every year, large music and film festivals are held in Kharkiv.

Following Russia’s takeover of Crimea in 2014, the Petro Konashevych-Sahaidachny monument in Sevastopol was demolished and handed over to Kharkiv.

Kharkiv has a humid continental climate with cold and snowy winters and dry and scorching summers.

Due to the region’s lower height, closeness to the Black Sea, and the city’s latitude, Kharkiv experiences very sunny warm summers that are quite moderate compared to temperatures in South European locations. In other words, Kharkiv has mild summers that are only seldom broken by short periods of severe rain.

Winters in Kharkiv are generally lengthy and chilly. Kharkiv has large snowfalls, particularly in February, and the surfaces of the Kharkiv River and Lopen are coated in ice throughout the winter.

The average annual rainfall is 513 mm (20 in), with the greatest falling in June and July.

Kharkiv is geographically situated on the banks of the Kharkiv, Lopan, and Udy rivers, which drain into the Seversky Donets watershed in Ukraine’s north-eastern area.

Historically, Kharkiv is a major city in the Sloboda Ukraine region (Slobozhanshchyna, sometimes known as Slobidshchyna) of Ukraine.

The estimated dimensions of Kharkiv are as follows: 24,3кm from north to south; 25,2кm from west to east.

Based on the relief of Kharkiv, it makes logical to explain that the city may be conditionally split into four lower districts and four upper districts.

Kharkiv is located in a broad valley formed by the rivers Kharkiv, Lopan’, Udy, and Nemyshlya. This valley runs from north to south between the Mid Russian highland and the Donetsk lowland. All of the rivers in Kharkiv unite and run into the river of Northern Donetsk. Engineers planned and erected a specific system of concrete and metal dams to manage the water level in Kharkiv’s waterways. One of the dams in Hydro Park manages the water level at a large man-made water reservoir developed near Kharkiv’s Saltovka area in the 1970s and 1980s.

Kharkiv boasts a huge number of green city parks with a long history of more than 100 years, many of which include extremely ancient oak trees and a variety of flora.

The primary themes of the International Economic Forum’s plenary sessions and panel talks were: Innovations, Investments, and Kharkiv Initiatives! are the implementation of the “Ukraine – 2020” Strategy for Sustainable Development, the results obtained and the plan for future actions to reform the local government and territorial organization of power in Ukraine, export promotion and investment attraction in Ukraine, new opportunities for public-private partnerships, practical steps to create “electronic government,” issues of energy conservation and development of the oil and gas industry in the Kharkiv Region, and the establishment of a

The current situation of the economy of Kharkiv, Ukraine, is detailed in part by The Economist in London, UK.

The Kharkiv Chamber of Commerce and Industry promotes the growth of enterprises in Kharkiv.

During the Soviet period, Kharkiv was Ukraine’s industrial production capital and the USSR’s third biggest center of industry and trade. Following the demise of the Soviet Union, the city’s predominantly defense-systems-oriented industrial output declined substantially. The sector began to revive and adapt to market economy demands in the early 2000s. There are now around 380 industrial businesses located in the city, employing a total of 150,000 people. Machine-building, electro-technology, instrument-making, and energy conglomerates are formed by the firms.

The IT sector is represented by a few hundred small IT start-ups that comprise a cluster of IT enterprises in Kharkiv.

Kharkiv is also the headquarters of one of Ukraine’s major banks, UkrSibbank, which has been a subsidiary of the BNP Paribas group since December 2005.