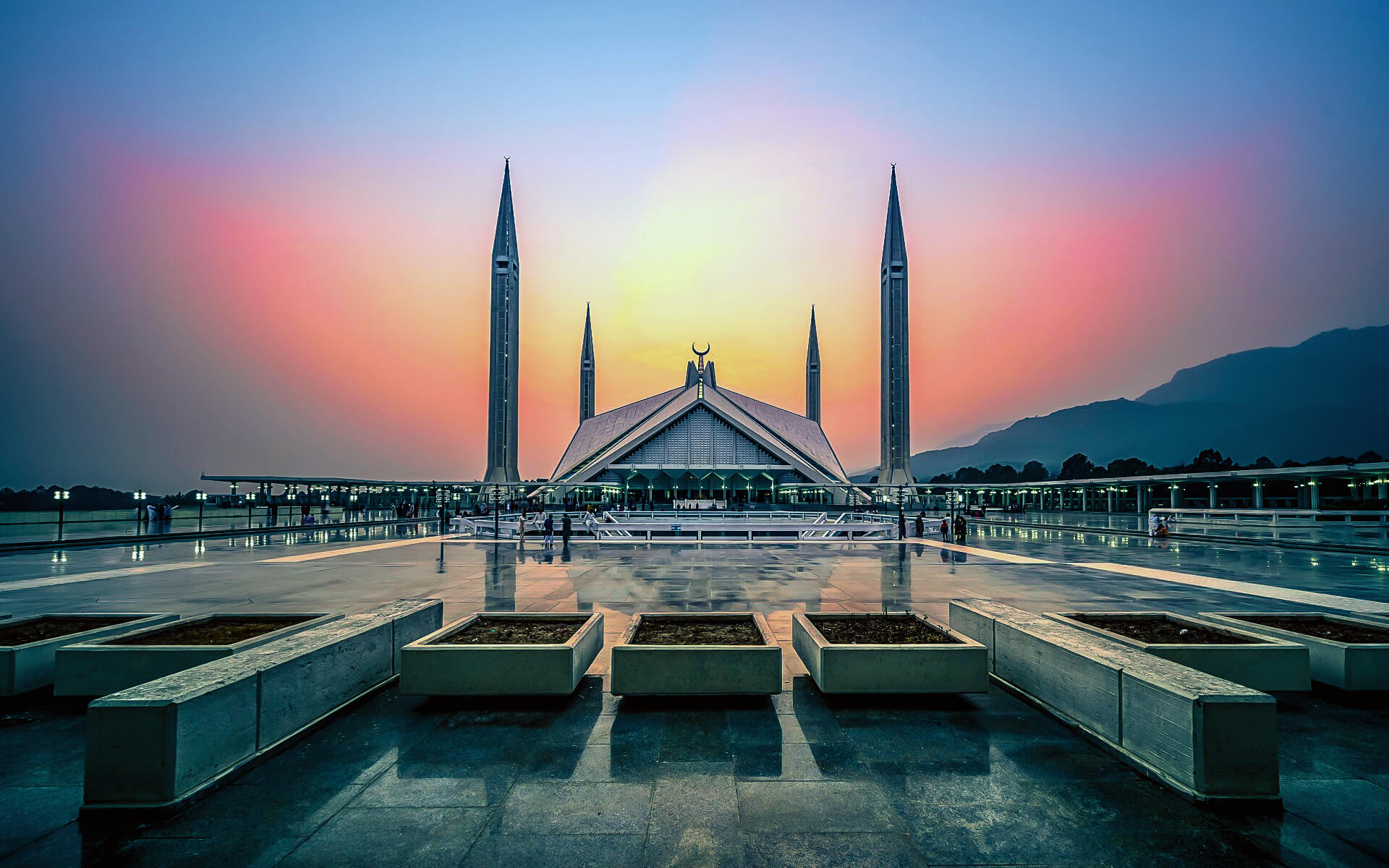 Islamabad has served as Pakistan’s capital since 1960, when it was relocated from Karachi. Although it is just the ninth biggest city in Pakistan, the wider Islamabad-Rawalpindi metropolitan region, which includes its twin city of Rawalpindi, is the third largest conurbation in the country, with a population of over 4.5 million people.

Islamabad has drawn individuals from all across Pakistan since its inception in the 1960s, making it one of Pakistan’s most cosmopolitan and urbanized towns. Islamabad, Pakistan’s capital, is the seat of the government, and the Presidential Palace (Aiwan-e-Sadr) is situated here.

By Pakistani standards, Islamabad is regarded as a comparatively clean, tranquil, and green city. It is home to many diplomats, politicians, and government personnel. Islamabad is a sophisticated, well-planned, well-maintained, and well-organized international metropolis situated on the Pothohar Plateau in north-eastern Pakistan, inside the Islamabad Capital Territory, and is considered Pakistan’s most developed city. It boasts the highest literacy rate in Pakistan and is surrounded by hills, similar to Canberra in Australia.

Islamabad is a relatively calm metropolis with a total size of 1,165.5 km2 (450 mi2), of which 906 km2 (349.8 mi2) is Islamabad proper. Visitors may be particularly interested in the Federal Government offices, Parliament House, and the official homes of the President and Prime Minister, as well as the Diplomatic Enclave – an area next to Parliament House devoted to foreign embassies and missions assigned to Pakistan.

Although the bulk of the population in Islamabad has historically been Federal Government workers, the riches of the Musharraf years has spurred a boom in Islamabad, and it is quickly becoming an important financial and economic center. The city’s traditional image has changed dramatically in the previous decade. Islamabad, which used to be a regular 9 to 5 metropolis, has grown more vibrant, with numerous new restaurants and hotels rising up to serve this new riches. Many foreign restaurant franchises have opened, and there has been a general increase in nightlife, with more commercial districts staying up late. However, after dark in the winter, the streets are noticeably quieter.

Even today, Islamabad attracts visitors from all across the nation who come to appreciate the city’s tranquil, noise-free ambiance, abundant vegetation, and beautiful surroundings. It also acts as a base camp for travelers traveling from the south and coastal places such as Karachi to comparatively lush valleys such as Swat and Kaghan, as well as northern locations such as Gilgit, Hunza, Skardu, and Chitral in the Himalayas ranges.

Islamabad has five main zones: Zone 1, Zone 2, Zone 3, Zone 4, and Zone 5. Zone 4 is the biggest in terms of land area. Zone 3 is mostly made up of the Margalla Hills and the Margalla Hills National Park. This zone also includes Rawal Lake. Zones 4 and 5 include Islamabad Park and the city’s rural districts. Zone 1 includes mostly of established residential sectors, whilst Zone 2 consists primarily of underdeveloped residential sectors. Each residential sector is recognized by an alphabet letter and a number, and it spans an area of around 2 km 2 km. Each sector is lettered from A to I, and each sector is subdivided into four numbered sub-sectors.

Visitors will quickly observe that Islamabad is built out on a grid pattern, with sector names based on the following scheme:
Diplomats are designated by the D sector, Elites by the E sector, Forces by the F sector, General by the G sector, Health and Education by the H sector, and Industry by the I sector.

Military housing complexes occupy E8, E9, making them virtually off-limits to travelers. G7, G8, and G9 are impoverished neighborhoods where city planners wanted cleaners and office clerks to dwell. However, they are often the city’s only culturally diverse districts. Instead of an Islamabadi, you’d find a regular Pakistani here.

The H and I sectors are a mishmash of residential, academic, and industrial regions. E11, E12, and even D12 are now under development, and a G13 is also being created. The majority of the activity takes place in F6 and F7, but the presence of embassies and influential Pakistanis in these locations also means a lot of security, concrete barricades, and raise arm barrier gates, which are thankfully missing elsewhere.

F6 and F7 may be your best choice for a guest home since they are normally luxury districts with all the essential utilities nearby.

Islamabad has a humid subtropical climate with five seasons: winter (November–February), spring (March and April), summer (May and June), rainy monsoon (July and August), and autumn (September and October). June is the warmest month, with average highs often exceeding 38°C (100.4°F). July is the wettest month, with heavy rains and nighttime thunderstorms, with the danger of cloudburst and floods. January is the coolest month. The microclimate of Islamabad is influenced by three manmade reservoirs: the Rawal, Simli, and Khanpur Dams. Winters are often marked by strong fog in the mornings and bright afternoons. Temperatures in the city remain warm, with snowfall at higher altitudes on adjacent hill stations, most notably Murree and Nathia Gali. Temperatures in January vary from 13°C (55°F) to 38°C (100 °F) in June. The highest recorded temperature was 46.6°C (115.9°F) on June 23, 2005, and the lowest was 6°C (21.2°F) on January 17, 1967. Snowfall has been reported in the city.

Islamabad is situated in Islamabad Capital Territory at 33.43°N 73.04°E, on the northern border of the Pothohar Plateau and at the foot of the Margalla Hills. It has a height of 540 meters (1,770 ft). Rawalpindi’s contemporary capital and the old Gakhar city of Rawalpindi lie side by side and are known as the Twin Towns since there is no definite border between the two cities.

Islamabad has a land area of 906 square kilometers (350 sq mi). The Specified Area encompasses an additional 2,717 square kilometers (1,049 square miles), with the Margala Hills to the north and northeast. The city’s southern outskirts are an undulating plain. It is drained by the Kurang River, which also serves as the site of the Rawal Dam.

Islamabad is a net contributor to the Pakistani economy, accounting for 1% of the country’s GDP while having just 0.8 percent of the population. The Islamabad Stock Market, formed in 1989, is Pakistan’s third biggest stock exchange, behind only the Karachi Stock Exchange and the Lahore Stock Exchange. The exchange has 118 members, including 104 corporations and 18 individuals. The stock exchange’s typical daily turnover exceeds one million shares. Islamabad LTU (Large Tax Unit) was responsible for Rs 371 billion in tax income in 2012, accounting for 20% of total revenue received by the Federal Board of Revenue.

With the construction of two Software Technology Parks, which house several national and international technical and information technology enterprises, Islamabad has experienced an increase in information and communications technology. The tech parks may be found at the Evacuee Trust Complex and Awami Markaz. Awami Markaz is home to 36 IT businesses, while Evacuee Trust is home to 29.

+923215374880 for tourist information and places to visit in the twin towns of Islamabad and Rawalpindi Islamabad’s area code is 51. dial 051-nnn-nnnn