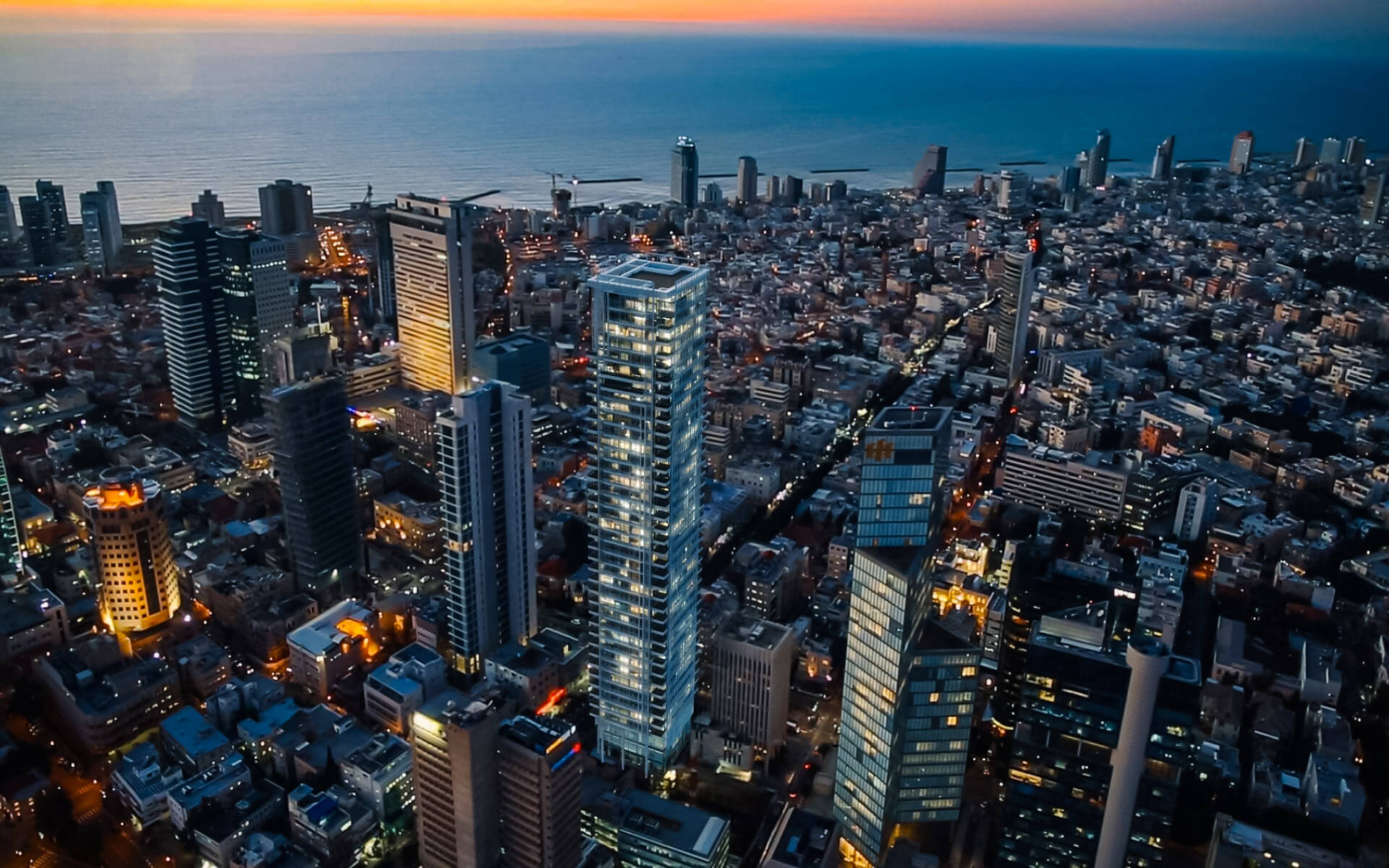 Tel Aviv is a large city in Israel, the second-most populated city under Israeli government administration after Jerusalem. Tel Aviv, located on the Mediterranean coast in central-west Israel, has a city population of 426,138 people. The city serves as the focal center of the wider Tel Aviv Metropolitan Area, which is home to about 3.7 million people, accounting for 42 percent of the country’s population. Tel Aviv is administered by the Tel Aviv-Yafo municipality, which is led by Ron Huldai, and is home to several international embassies.

The city was built in 1909 on the borders of the old port city of Jaffa (Hebrew: Yafo) by Jewish immigrants. The first neighborhood of the present city, Neve Tzedek, had already been built in 1886. Tel Aviv’s expansion quickly surpassed that of Jaffa, which had a predominantly Arab population at the time, due to immigration of primarily Jewish refugees. In 1950, two years after the founding of the State of Israel, Tel Aviv and Jaffa were united into a single municipality. Tel Aviv’s White City, which was named a UNESCO World Heritage Site in 2003, has the world’s highest concentration of International Style structures (Bauhaus and other related modernist architectural styles).

Tel Aviv is a worldwide metropolis and the world’s twenty-fifth most significant financial hub. Tel Aviv has the third-largest economy in the Middle East, behind Abu Dhabi and Tehran, and the world’s 31st highest cost of living. Every year, approximately a million foreign tourists visit the city. It is known as “The City That Never Sleeps” and the “Party Capital,” and it boasts a vibrant nightlife, a dynamic environment, and a well-known 24-hour culture.

Tel Aviv receives approximately a million foreign tourists each year. In 2010, it was rated 34th in the world by Knight Frank’s world city survey. Travel + Leisure magazine ranked Tel Aviv the third-best city in the Middle East and Africa (after only Cape Town and Jerusalem), while National Geographic called it the ninth-best beach city in the world. Tel Aviv has routinely listed as one of the world’s best LGBT destinations.

Tel Aviv is the Middle East and Africa’s sixth most visited city. Because to its bustling nightlife, youthful vibe, and well-known 24-hour culture, it is known as “the city that never sleeps” and a “party capital.” Some of the world’s most prestigious hotels have branches in Tel Aviv, including the Crowne Plaza, Sheraton, Dan, Isrotel, and Hilton. It is home to several museums, architectural and cultural landmarks, and city tours are provided in a variety of languages. Architectural tours, Segway tours, and walking tours, in addition to bus excursions, are popular. Tel Aviv features 44 hotels with a total capacity of about 6,500 rooms.

Tel Aviv’s beaches and promenade play an important part in the city’s cultural and tourism landscape, and are often listed as some of the greatest beaches in the world. Hayarkon Park is Israel’s most frequented urban park, with 16 million people each year. Charles Clore Park, Independence Park, Meir Park, and Dubnow Park are among the other parks within city borders. Green areas cover around 19% of the city’s land area.

Tel Aviv is situated in central Israel, about 32°5′N 34°48′E on the Israeli Mediterranean coast, on the ancient land bridge connecting Europe, Asia, and Africa. Tel Aviv, located just north of the old port of Jaffa, is built on sand dunes and hence has rather low soil fertility. The ground has been leveled and has no significant slopes; the most prominent physical features are cliffs above the Mediterranean shoreline and the mouth of the Yarkon River. Because to the growth of Tel Aviv and the Gush Dan area, there are no definitive boundaries between Tel Aviv and Jaffa, nor between the city’s districts.

The city lies 60 kilometers (37 miles) northwest of Jerusalem and 90 kilometers (56 miles) south of Haifa. Herzliya is to the north, Ramat HaSharon is to the northeast, Petah Tikva, Bnei Brak, Ramat Gan, and Giv’atayim are to the east, Holon is to the southeast, and Bat Yam is to the south. The city’s economy is divided into two parts: north and south. With the exception of Neve Tzedek and some new building on Jaffa Beach, Southern Tel Aviv is regarded less wealthy than Northern Tel Aviv. Azrieli Center and the key financial and commercial sector along Ayalon Highway are located in central Tel Aviv. Tel Aviv University, Hayarkon Park, and luxury residential districts such as Ramat Aviv and Afeka are located on the city’s northern outskirts.

Tel Aviv has been listed as the world’s twenty-fifth most significant financial hub. It was erected on sand dunes in an unfavorable agricultural location. Instead, it grew into a commercial and scientific research center. Passage Pensak, the country’s first retail arcade, was erected there in 1926. Tel Aviv was already the biggest city in Palestine by 1936, when tens of thousands of middle-class immigrants came from Europe. At the Yarkon estuary, a small port was established, and several cafés, clubs, and movies opened. At this time, Herzl Street was transformed into a commercial street.

The city has been characterized by Newsweek as a “thriving technical hub” and The Economist as a “miniature Los Angeles.” Newsweek named the city one of the ten most technologically influential places in the world in 1998. Since then, the high-tech sector in the Tel Aviv region has grown. The Tel Aviv metropolitan region (including satellite towns such as Herzliya and Petah Tikva) is Israel’s high-tech epicenter, known colloquially as Silicon Wadi.

Tel Aviv is home to Israel’s sole stock market, the Tel Aviv Stock Exchange (TASE), which has hit record highs throughout the 1990s. The Tel Aviv Stock Exchange has also attracted notice for its resiliency and capacity to rebound from wars and natural calamities. For example, on the final day of both the 2006 Lebanon war and the 2009 Gaza operation, the Tel Aviv Stock Exchange was higher than on the first day of warfare. The city is home to several multinational venture capital firms, scientific research institutions, and high-tech industries. Chemical processing, textile mills, and food producers are among the industries of Tel Aviv. Tourists are drawn to the city’s nightlife, cultural attractions, and architecture, and their spending aids the local economy.

The Globalization and Global Cities Study Group and Network (GaWC) at Loughborough University published a world city inventory in 2008 based on their degree of sophisticated producer services. Tel Aviv has been designated as a beta+ global city.

Kiryat Atidim’s high-tech zone debuted in 1972, and the city has since grown into a significant global high-tech powerhouse. In December 2012, the city was placed second on a list of the best locations to establish a high-tech business, behind only Silicon Valley. Tel Aviv has more than 700 startup enterprises and research and development facilities in 2013, and was voted the world’s second-most inventive city, behind only Medelln but ahead of New York City.