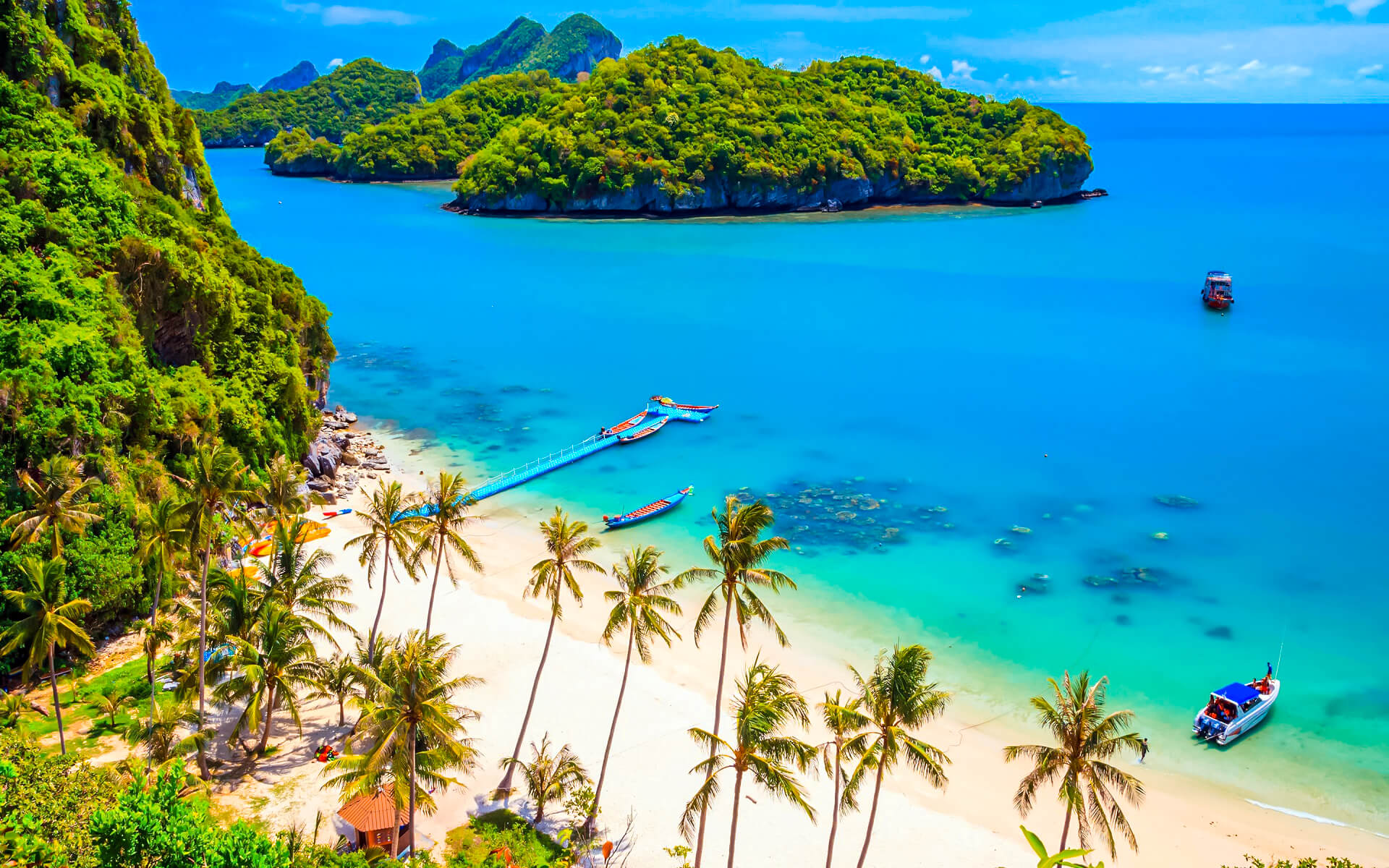 Ko Samui, sometimes known simply as Samui, is an island in the Gulf of Thailand, about 700 kilometers south of Bangkok and 80 kilometers off the eastern coast of Southern Thailand.

With an area of 228.7 km2, a population of approximately 63,000, and a hotel occupancy rate of 73 percent as the number of guests grows, Ko Samui is Thailand’s second-largest island after Phuket. The island has an abundance of tourism resources, including sandy beaches, coral reefs, and coconut palms.

The rise of tourism in Ko Samui has led in the construction of more resorts, bungalows, and luxury private villas on the island. The island’s entire hotel room inventory of 17,479 in 2013 will be supplemented by an additional 459 new rooms by 2015. A steady change in demand has resulted in an increase in Asian tourists and families, although the top three source markets have been Germany, the United Kingdom, and Thailand, with a combined 27 percent share. Bangkok Airways continues to modernize its fleet with new Airbus jets, phasing out outdated ATR 72 propeller planes, providing an extra 189,000 airline tickets for Samui visitors. Bangkok Airways has already extended its daily flight schedule from 36 to 50.

Overall, Ko Samui is a pretty large island, the second largest in Thailand after Phuket. Chaweng and Lamai are the most popular and commercialized beaches, whereas the northern beaches and neighboring towns of Mae Nam, Bophut, Bang Rak (Big Buddha), and Choeng Mon are more serene options, while the west coast beaches are still (relatively) quiet.

Samui, an island of immense natural beauty and diversity, is home to around 50,000 full-time residents, 90 percent of whom are Buddhist. The coastal lowlands’ palm-fringed coastline and coconut and fruit agriculture ascend to a central granite massif, the slopes of which are clothed in virgin rainforest.

Samui, at 247 km2, is Thailand’s second biggest island and the largest of an archipelago of over 80 (mainly deserted) islands that comprise the Ang Thong National Marine Park, a kayaking and snorkeling paradise. Samui is large enough for serious investigation by the adventurous and athletic, yet it can be circumnavigated in a few of hours by motorcycle or automobile.

The island was most likely initially populated some 15 centuries ago by fisherman from the Malay Peninsula and south China. It first appears on Chinese maps in 1687, with the name Pulo Cornam. Samui is a strange name in and of itself. Perhaps it is a corruption of the Chinese word Saboey, which means “safe refuge,” or it is an expansion of the name of one of the natural trees, mui.

Until the late twentieth century, Samui was an isolated self-sufficient village with limited connectivity to the Thai mainland. Until the early 1970s, there were no roads on the island, and the 15-kilometer travel from one side to the other required a full-day hike through the steep interior rainforests.

The first travelers landed to Ko Samui in the early 1970s on the back of a coconut boat. For many years after that, the island had just a few bungalows and a trickle of visitors. Things began to change in the early 1990s, when visitors began to arrive in full boats, and the area has developed significantly since then. Samui is becoming Thailand’s second most popular island getaway (Phuket is first). With its white sandy beaches, sparkling coral, lush lagoons, stunning waterfalls, swaying coconut palms, and crystal blue water, Ko Samui may not be the most beautiful island in Thailand, but it is nevertheless a sanctuary of natural beauty. The water at Bophut Beach, on the other hand, is often muddy, particularly around December.

Unfortunately, Ko Samui’s expansion is beginning to take its toll, and the beaches of Chaweng and Lamai are packed during the summer season.

The climate of Ko Samui is tropical savanna. The island has just one real dry season month, February, when the average monthly precipitation falls below 60 mm (2 in), the threshold for a tropical dry season month. For the most part of the year, the climate is warm and humid. However, in comparison to Phuket and the rest of southern Thailand, Samui’s weather is relatively dry (Samui receives about 1,960 mm of rain per year, while Phuket receives 2,220 mm (87 in), and while Phuket’s Wet Season lasts 6–8 months, Ko Samui has only two months with more than 212 mm (8 in) of rain). The months of October and November often see the most precipitation. Rain showers are often 20–60 minutes in length throughout the remainder of the year due to the tropical environment.

Ko Samui is located in the Gulf of Thailand, about 35 kilometers northeast of Surat Thani (9°N, 100°E). It is the largest island in the Chumphon Archipelago. The island is about 25 kilometers wide at its widest point. The populous resort islands of Ko Phangan, Ko Tao, and Ko Nang Yuan are located to the north. The little uninhabited island of Koh Som is close to Bangrak in NE Samui, while the smaller Ko Matlang lies to the northeast of Chaweng. Ko Taen and Ko Matsum are located in the southern direction and have relatively modest tourism amenities. To the west are 44 more islands that make up the Mu Ko Ang Thong National Park, which may be reached on a day excursion boat cruise from Ko Samui.

The center portion of Ko Samui island is primarily untouched tropical vegetation, including the biggest mountain, Khao Pom, which rises to 635 meters. The different lowland and coastal regions are linked by Route 4169, a 51-kilometer road that runs largely along the coastline and encircles the majority of the island. From 4169, several more concrete roads branch out to serve various localities.

Nathon, the island’s historic capital, is located on the west coast and still contains several government buildings as well as two of the island’s five main docks. Nathon is the principal port for vehicle and cargo traffic from the mainland, as well as the center of the fishing sector, while the regional government’s headquarters has been moved farther south. The public hospital is located in Nathon. Nathon’s position as the primary port and the nearest populated region to the mainland gave the motivation for it to become Samui’s commercial center. More recently, the move away from reliance on the local coconut industry, as well as the continuous expansion and development of the tourism sector, as well as the airport’s northeastern position, has resulted in a surge in commercial activity in Chaweng and Bophut.

The island’s economy has traditionally been focused on subsistence agriculture and fishing, with coconuts serving as the primary cash crop. Tourism has been an economic element since the 1980s and is currently the leading sector. Ko Samui’s transportation connections have made it a popular location for travellers looking to explore the surrounding islands.

Thailand also boasts an abundance of Internet cafés. The hourly rate is around 30 baht. Connecting to the Internet through broadband satellite is an option for folks living in remote places. All major Thai mobile providers’ GSM networks cover the island pretty effectively. While roaming is a possibility, getting a local SIM card will save you a significant amount of money on international calls. Furthermore, GPRS/EDGE/3G service is a low-cost and simple option to connect to the Internet from nearly anyplace.

Most resorts, as well as numerous restaurants, cafés, and shopping malls, have free Wi-Fi.