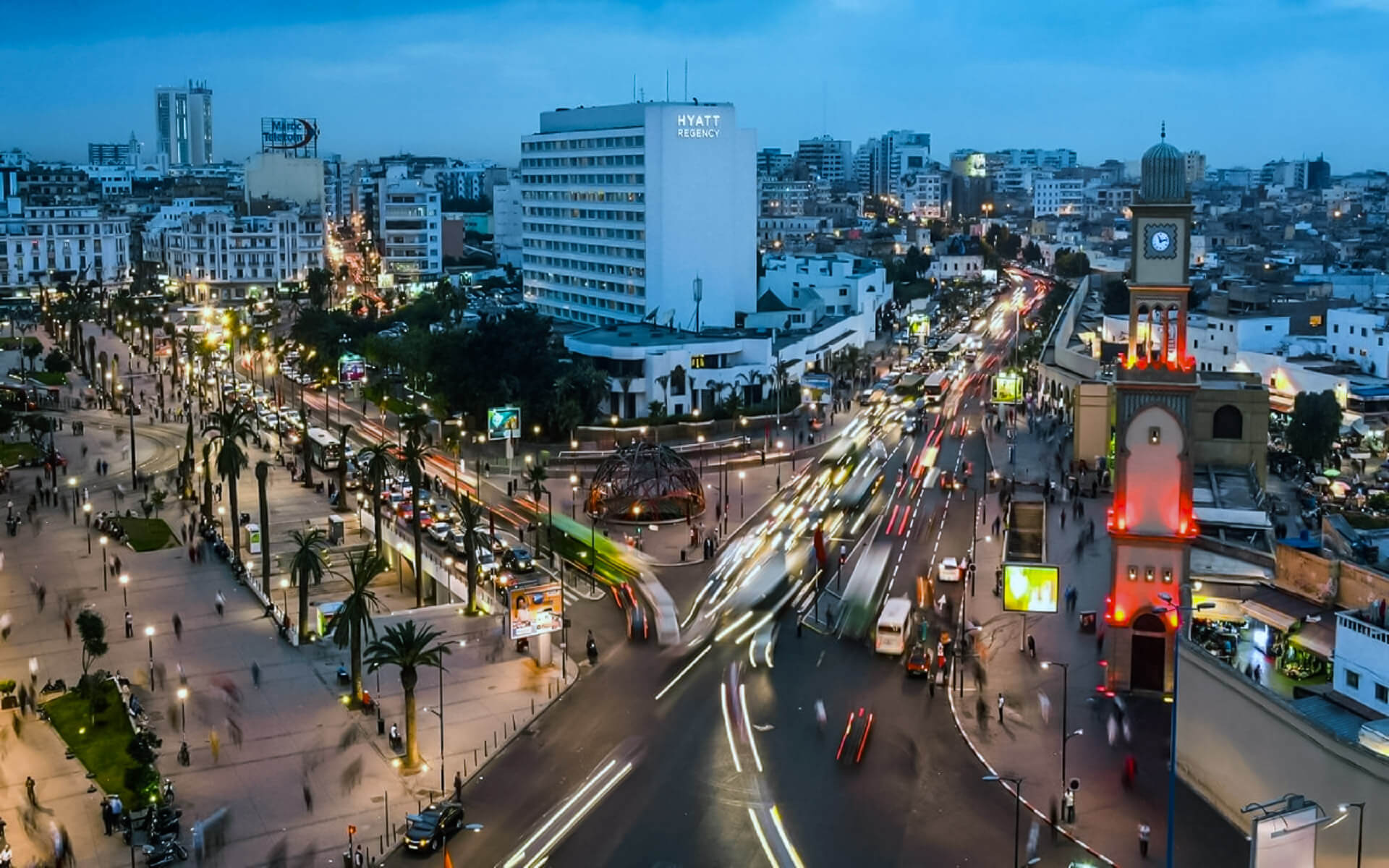 Casablanca is Morocco’s biggest city, situated on the Atlantic Ocean in the country’s central-western region. It is one of Africa’s most significant cities, economically and demographically.

Casablanca is Morocco’s principal port and one of the continent’s main financial hubs. The 2012 census, when adjusted for recent population growth, indicated a population of around 4 million in the Casablanca prefecture. Casablanca is considered Morocco’s commercial and business hub, while Rabat serves as the country’s political capital.

Casablanca is home to the headquarters and primary industrial facilities of the biggest Moroccan enterprises and multinational corporations doing business in the country. Recent industrial data indicate that Casablanca maintains its historical status as the country’s primary industrial zone. The Port of Casablanca is one of the world’s biggest man-made ports and the largest in North Africa. Additionally, it serves as the Royal Moroccan Navy’s principal naval base.

Casablanca may be Morocco’s cultural, industrial, and economic core, as well as its biggest city, but it is one of the country’s least charming sights. With a modest, inconspicuous medina and a busy ville nouvelle, visitors coming via Casablanca may be tempted to take the first train out to adjacent Rabat. The awe-inspiring Hassan II Mosque, as well as the buzzing nightlife and architecture (mainly colonial-era structures), are worth at least a day of your Moroccan trip.

The contemporary city of Casablanca was created by Berber fisherman in the 10th century BC and was later exploited as a strategic harbor named Anfa by the Phoenicians, Romans, and Merenids. It was demolished by the Portuguese and rebuilt under the name Casa Branca, only to be abandoned following an earthquake in 1755. The Moroccan ruler rebuilt the city as Daru l-Badya, and Spanish businessmen who established commercial stations there gave it its modern name of Casablanca. The French invaded the city in 1907, established it as a protectorate in 1912, and beginning building on the ville nouvelle, although it won independence from the rest of the nation in 1956.

Casablanca is presently Morocco’s biggest city, with a population of about 4 million people, and it also has the world’s largest artificial harbor, but no ferry service. Casablanca is also Morocco’s most liberal and progressive city. Young males openly flirt with scantily dressed women, designer brands are the standard in the fashionable, coastal neighborhood of ‘Ain Diab, and many young Moroccans communicate completely in French.

However, not everyone is living the Casablanca fantasy. Tens of thousands of rural Moroccans who left the drought-ravaged interior to pursue work in the metropolis are dealing with high unemployment and high housing prices. Poverty, particularly in slums on the outskirts of the city, has resulted in high rates of crime, drug addiction, prostitution, and the spread of Islamism.

Casablanca is a veritable melting pot of Moroccan extremes.

Casablanca has a hot-summer Mediterranean climate and, by a narrow margin, escapes the mild semi-arid climate of Bsh (annual precipitation: 412mm and precipitation threshold: 375). The cold Canary Current off the Atlantic coast moderates temperature variance, resulting in a climate that is very similar to coastal Los Angeles, with comparable temperature variations. The city receives considerable precipitation on 72 out of every 365 days, for a total of 412 mm (16.2 in) every year. The city’s greatest and lowest recorded temperatures are 40.5 °C (104.9 °F) and 2.7 °C (27.1 °F), respectively.

Casablanca sits on the Chawiya Plain, which has long been known as Morocco’s breadbasket. The Bouskoura forest is the sole natural attraction in the city, apart from the Atlantic shore. The eucalyptus, palm, and pine trees dominate the forest, which was established in the twentieth century. It’s half-way between the city’s international airport and the center of town.

Casablanca’s lone body of water is oued Bouskoura, a tiny seasonal stream that flowed into the Atlantic Ocean near the harbor until 1912. Urbanization has covered much of oued Bouskoura’s bed, leaving just the section south of El Jadida road visible. Oum Rabia, 70 kilometers (43.50 miles) south of Casablanca, is the nearest permanent river.

Casablanca is serviced by all of Morocco’s mobile phone operators. The most frequent are Wana, Meditel, and Maroc Telecom. Mobile phones may be purchased at any of these stores’ counters, and the majority of them do not need calling plans. Instead, recharge cards with a phone number may be purchased at corner shops. When you contact that number, the corporation deducts the cost of the card from your account balance. If customers need more than one phone number, they may purchase several SIM cards and swap them in and out of the phone.

Cyber cafes are located across the city and provide Internet connection. The hourly rate is normally approximately €1.

Phone providers provide mobile internet services that connect to your computer’s USB connection (currently, there are no mac-compatible devices.) These services are available without a contract and are recharged in the same way that a phone is.