La Rambla is the most famous street in Barcelona, the lifeblood of the city, a favorite among tourists. This charming street, along which there are several interesting sights, extending to 1.2 kilometers between Plaza de Catalunya and the monument to Christopher Columbus. Sometimes used the name ‘Les Rambles’, with the plural points out that there are actually several superimposed rambls, or more connected streets.

La Rambla is exactly 1.2 kilometers long, and almost everyone who visits Barcelona walk down to this street. La Rambla was built in 1766, and followed the contours of the medieval city walls, which are housed here since the 13th century. In Barcelona, a city of narrow and winding street, La Rambla is the only place where everyone could stroll and spend their free time. Because of it’s location, it has become a place where you meet all strata of society, rich and poor. Spanish poet Federico Garcia Lorca described it saying, “This is the only street in the world for which I would like to have no end.” La Rambla starts from Plaza Catalunya and ends at the monument to Columbus in the “Port Vell” – barselonian port.

La Rambla isn’t a spectacular place, but it is very fun for walking and exploring the spirit of Barcelona. If you haven’t walked down this street, you can’t tell that you were in Barcelona. Rambla boulevard is unavoidable when you visiting Barcelona.

On both sides Rambla is surrounded by the so-called “old town”, which is characterized by the Gothic style and there really are some of Gaudi’s masterpices. Fountain Font de les Canaletes is a famous place for tourists, but also for fans of Barcelona. In the northern part of the Ramble, is Font de les Canaletes fountain with unusual design. Namely, instead of large jets of water that flowed from it, or sprayed from it, this fountain dominates – street lamp. Font de les Canaletes also has four taps from which walkers can freely drink, while the central part of her leaning lamp. Besides that looks interesting for this fountain is linked typical legend : if you drink from this fountain you will return to Barcelona. As mentioned, this small fountain traditionally a gathering place for fans of FC Barcelona. For the modest size of the fountain, it seems logical to gather in another “spectacular” site. It’s about an interesting tradition that dates back to the thirties of 20th century . Opposite the fountain is located the editorial sports daily ‘La Rambla’, in front of which the crowd gathered regularly at the time of Barselona games, wanting to find out the result.

Journalists printed the results on the board outside the office and in the case of a favorable outcome, followed to a large celebration around the fountains and the rest of the Ramble. The tradition has held until today. If you continue further south, soon you will reach La Boqueria, the most famous city market and one of the liveliest places in the city. Market was built in 1840 on the site of a former monastery of St. Joseph, but traded was in this area for centuries before. This assumes that the meat sold there in the 13th century and trade later extended. As with time traders began to create crowded with all the busy Rambla, it was decided that build them a larger “home”. Boqueria is today one of the largest urban market, a picturesque town in which you can enjoy in all their senses. Keep in mind that this market usually very busy, largely due to the large number of tourists, so the prices are often slightly higher than elsewhere.

La Rambla is a cheerful, lively streets, but somehow it seemed logical that of the city’s most famous artist Joan Miro, left in Barselona a legacy in his work. South of La Boqueria, right at the subway station Liceu is created a mosaic street “Pla de l’Os”. This cheerful work is easily recognizable because Miro’s characteristic, bright colors. Helpful hints although traffic on the Rambla is permitted, it is threated as the only pedestrian zone. The reason is that the central part of the street doesn’t interrupt traffic, while pedestrians can safely move all the way from Plaza Catalunya to the Columbus monument. It is an area that is full of life, full of kiosks, florists, street entertainers, restaurants, above all, full of people. Precisely for this reason, always be carefull while walking on the street, because there are large crowds and often find pickpockets. 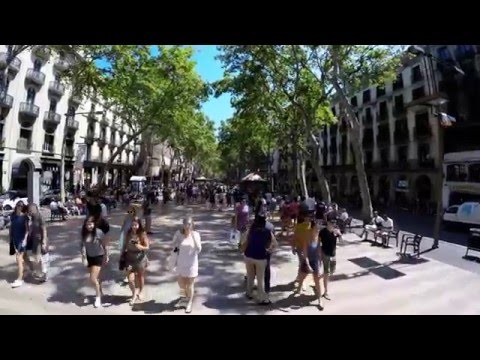 Previous article
Dream vacation in “Jail”
Next article
In Paris, the best things are free
Most Popular
Popular destinations