The most delicious olives grow here, Muscat wine from Patras is the sweetest, olive oil is the purest, figs are juicy, and the beaches are crystal clear. Peloponnese is considered a peninsula, though it is actually an island, and the one in which some famous stories from Greek mythology are set. The decision which would seal the fate of Troy was made at Peloponnese, the first Greek city freed from Turkish slavery is at Peloponnese.

Peloponnese is best reached from Athens (located 80 kilometers away), on the road to Loutraki, across the Corinth Canal which was started in 1893 and built by hand, with shovels after eleven years. Many Greek rulers were thinking about how to avoid and bypass the Peloponnese, but the first one who had the idea how to do it was the Roman emperor Julius Caesar. Caligula employed Egyptian architects who persuaded him to give up because the water level in the Gulf of Corinth was higher than in the Saronic Gulf, which could cause flooding…

The channel was built after Greece gained formal independence from the Ottoman Empire. Among the guests at the opening ceremony were King George and Franz Josef. 12,500 vessels (34 per day) pass through the channel every year, and the plan is to dig a new, wider one so that tankers can pass. The channel is six miles long and 21 meters wide, and bungee jumping is organized from the top of it. Two bridges connect the beautiful city of Corinth with Loutraki and Athens. 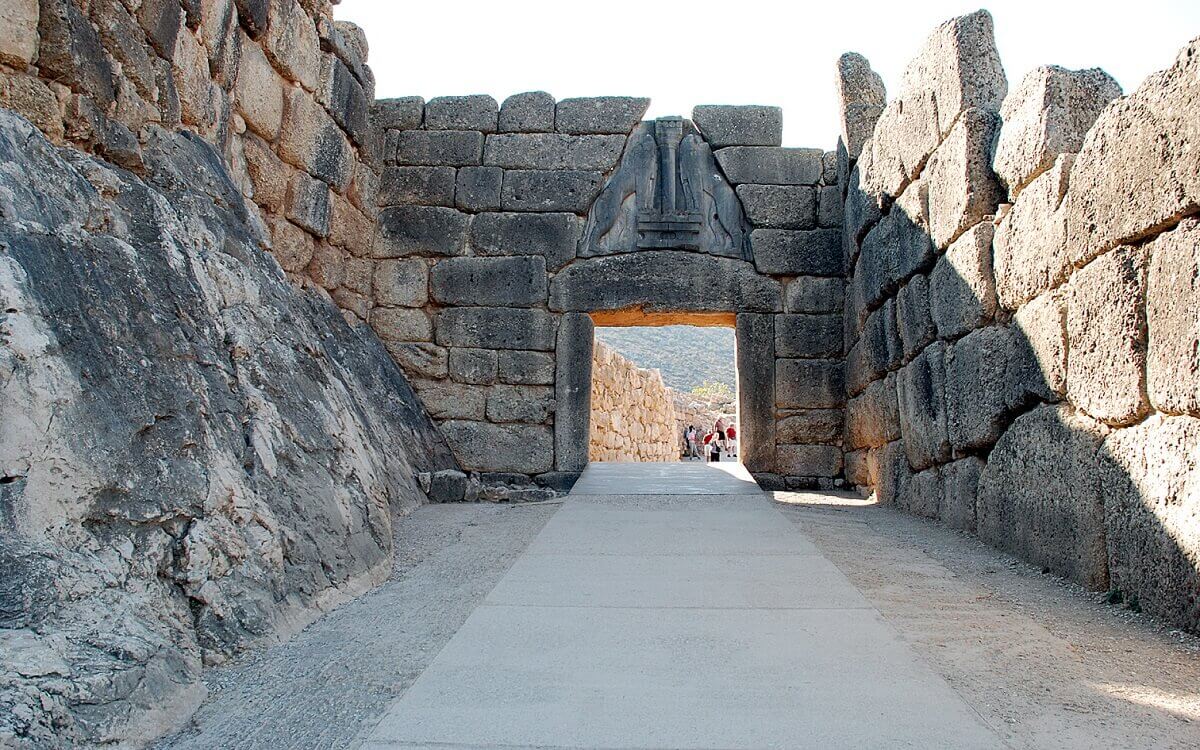 Peloponnese has a beautiful coastline, fertile valleys and tall mountains. The peninsula consists of four small peninsulas: Messinia, Mani, Epidaurus and Argolida. The most mysterious archaeological site of Greece is only 30 kilometers away from the city of Corinth.

Mycenae is known as the palace of the legendary King Agamemnon who led the Greeks in the Trojan War. Homer described Mycenae as a union around its main cities, and after archaeologists completed the excavation, they got clear confirmation of Mycenaean dominance. It is interesting, however, that the royal tomb and the golden mask discovered by archaeologist Heinrich Schliemann did not belong to Agamemnon.

The most interesting is the main Lion’s Gate, but it is the Treasury of Atreus whose corbelled dome with an opening above the door still confuses tourists. Mycenae offers a view of the Achaean warrior created by nature itself. In fact, when you look at neighboring mountains what you really see is a silhouette of a soldier. 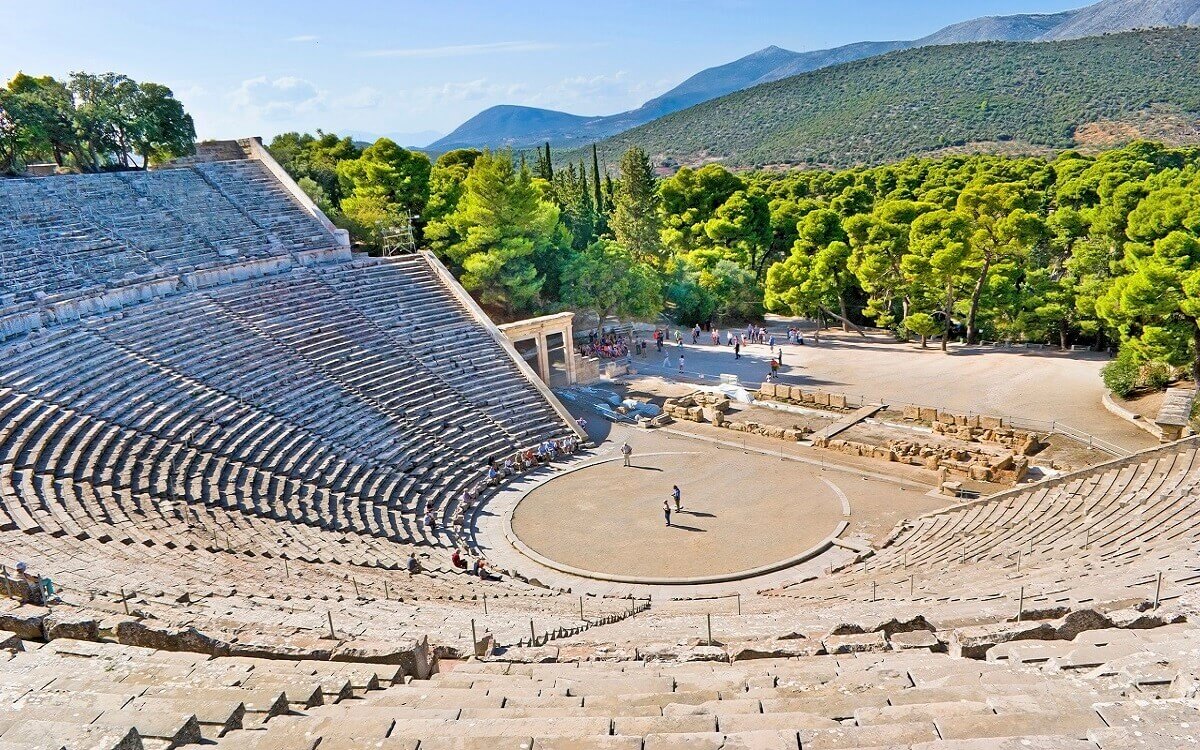 The most interesting archaeological site Argolid is the world famous amphitheater admired for its exceptional acoustics, the secret of which has not yet been discovered. “Zero” point is located in the middle of the stage, marked by a white round stone, from which it is possible to hear even the murmur of the crowd up to the last seat in the last row. Polykleitos the younger did an excellent job. Scientists are trying to discover the secret of acoustics, but one of the possible solutions is the fact that the seats are in the shape of an earlobe.

The amphitheater was built in the 4th century BC for 15,000 spectators, and is used today for the festival of ancient drama, theater performances, classical works of Aristophanes, Sophocles, and Shakespeare. The stage of a Greek amphitheater is different in shape from the Roman amphitheater. The Greek one is round, and the Roman stage is semicircular.

In ancient Epidaurus famous Eskulap (Asclepius) was born, who was the son of Apollo, and became the god of doctors and medical skills. Eskulap learned medical skills, healed the sick and found cures for many diseases that are still helpful today. For example, he used mint tea as a cure for stomachache. Eskulap healed so many people that grateful patients helped to raise a boarding house for future patients. The sanatorium had 160 guest rooms and nearby mineral springs.

The remains of ancient Sparta 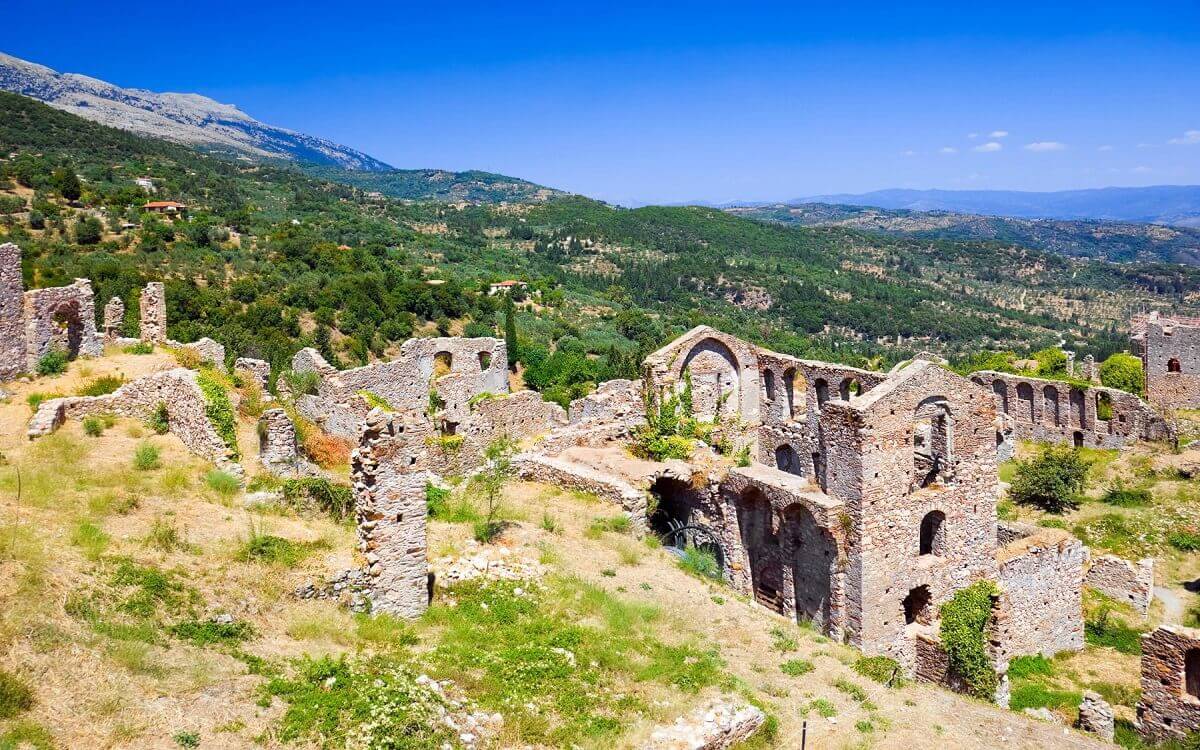 Nafplio has existed for three millennia, and up on the hill there was the temple of Poseidon that protected the city. At the time of the Byzantine Empire there lived Zguros Leon, the son-in-law of the Byzantine emperor.

Mistra in the heart of the Peloponnese was, after all, the last Byzantine sanctuary. It is located six kilometers from Sparta, and the capital city of medieval Morea and is today the best-preserved fortress of Greece, which is under the protection of UNESCO. The last Byzantine emperor, Constantine Dragas was crowned in Mistra. The famous Hexamilion wall was built in 480 BC against the invading Persian emperor Xerxes and kept this oasis of Christianity until 1446. In 1821 Mistra was the first town to be liberated from the Turkish government, which is another confirmation of courage of the descendants of the Spartans.

The biggest surprise for tourists is the fact that Sparta is not located on the coast. Sparta is the capital of Lakonia, whose inhabitants have always been brave, but not too much in love with the sea. The Spartans raised the Hexamilion wall to protect themselves from the Persians, but it is Herodotus who warned them that no wall can make the difference without a strong navy.

It is interesting that the historian Thucydides predicted 2,500 years ago that Sparta would diminish in the future and there would only be remnants of its former size. The city that was once the center of the Peloponnesian League and the home of the greatest warriors of the ancient world almost disappeared. There is a local museum that stores the archaic sculpture of the famous Leonidas, the hero of the battle of Thermopylae. Modern Sparta is a very beautiful city.