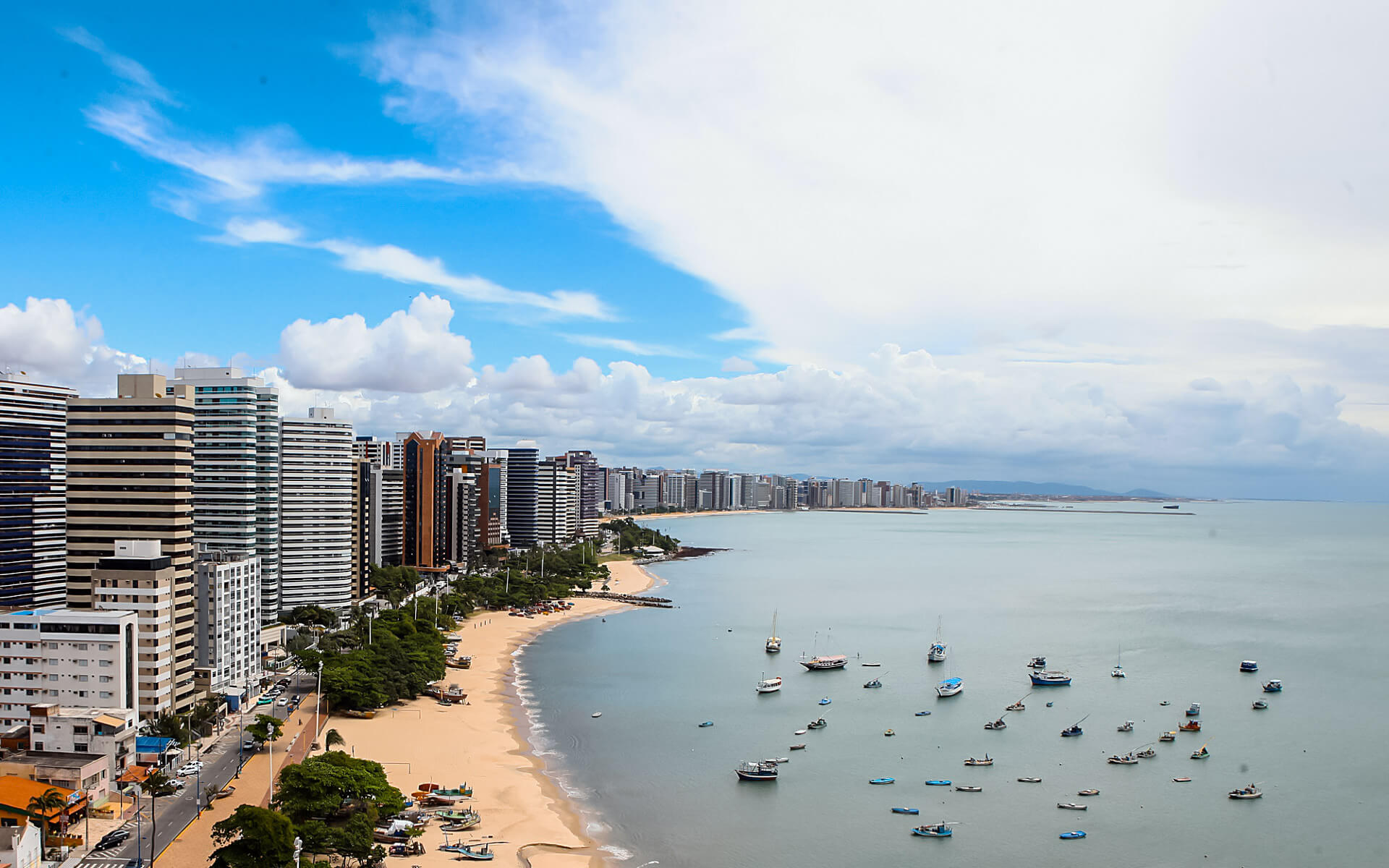 Fortaleza is the capital of the state of Ceará in northeastern Brazil. Fortaleza is Brazil’s fifth biggest city, with a population of close to 2.55 million (metropolitan area population exceeding 3.6 million).

The city was one of the 2014 FIFA World Cup host cities. Furthermore, Fortaleza served as a host city for the 2013 FIFA Confederations Cup.

Fortaleza is the capital of Cearástate, a state on Brazil’s northeast coast. It is one of Brazil’s biggest cities and unquestionably one of the most dynamic. The city is perhaps the most popular domestic package trip destination, and Europeans are beginning to follow suit. Despite its reputation as a party town, Fortaleza’s carnival is quite small, however it is rising in size year after year, with the main parades being maracatu-style. The city has a population of 2.55 million, while the metropolitan region has a population of 3.5 million.

Fortaleza is a popular tourist attraction in the Brazilian domestic market. The city is home to numerous five-star hotels. Additionally, there are a few four-star hotels and inns. Further down the beach front, at Iracema beach, is the new pier and, subsequently, the roller skating area.

BEACHES IN THE CITY

Numerous municipal tourist information offices are located around the city, the most accessible of which are located at the airport, Central Market, and Beira Mar (halfway between McDonald’s and the fish market).

Fortaleza has a typical tropical climate, more precisely a tropical wet and dry climate, characterized by year-round high temperatures and high relative humidity. However, these circumstances are often alleviated by lovely seaside breezes. The average temperature is very constant throughout the year. December is the hottest month, with a maximum temperature of 30.7 °C (87.3 °F) and a minimum temperature of 24.6 °C (76.3 °F). The rainy season lasts from February through May, with March and April seeing the most precipitation. The average annual temperature is 26.6 degrees Celsius (79.9 degrees Fahrenheit). Fortaleza has a relative humidity of 79 percent and an average annual rainfall of 1,608.4 mm (63.32 in).

Fortaleza’s Gross Domestic Product (GDP) is R$42 billion, owing to the city’s diverse trade, industry, and tourism. The central business district of Fortaleza, or Centro, is where the majority of commercial activity occurs. Monsenhor Tabosa Avenue, which runs next to Iracema Beach, and the Aldeota area are other important business zones. Fortaleza is home to two of the country’s ten largest malls, Shopping Iguatemi and RioMar Shopping, which are ranked seventh and eighth in size, respectively. There are numerous other malls in Fortaleza, the most notable of which are RioMar Norte, Shopping Del Paseo, North Shopping Jóquei, Parangaba Shopping, Via Sul, Varanda Mall, and Jardins Open Mall.

The manufacturing sector is responsible for the production of footwear, textiles, leather-derived products, as well as processed foods and drinks. At the moment, Fortaleza provides a diverse range of event venues, allowing for the promotion of a variety of events, from local business meetings to national and international conventions and fairs attended by thousands of people. The largest and most modern event venue in Northeast Brazil is Fortaleza’s Event Center of Ceará (CEC), which debuted in 2012. Additionally, several hotels, business centers, and other locations provide sufficient space for all sorts of events. TAF Airlines, which has since ceased operations, had its headquarters in Fortaleza.

Fortaleza and all adjacent municipalities have the same area code: 85.

The Internet is ubiquitous, with widely disparate levels of comfort, technology, and bandwidth. R$ 3-4 per hour is a reasonable rate in tourist locations; anything more is excessive. If you go inland, you may receive R$1/h.

In the café of the 24-hour Po de Açcar supermarket on Avenida Aboliço, there is a free Wi-Fi zone.

Numerous post offices are located along or near Beira Mar: Directly across from the Praia Iracema church; on Av. Monsenhor Tabosa, directly across from Ideal Clube; a little booth nearly completely submerged in sand in front of Clube Nautico; and in the Scala Residence mall.