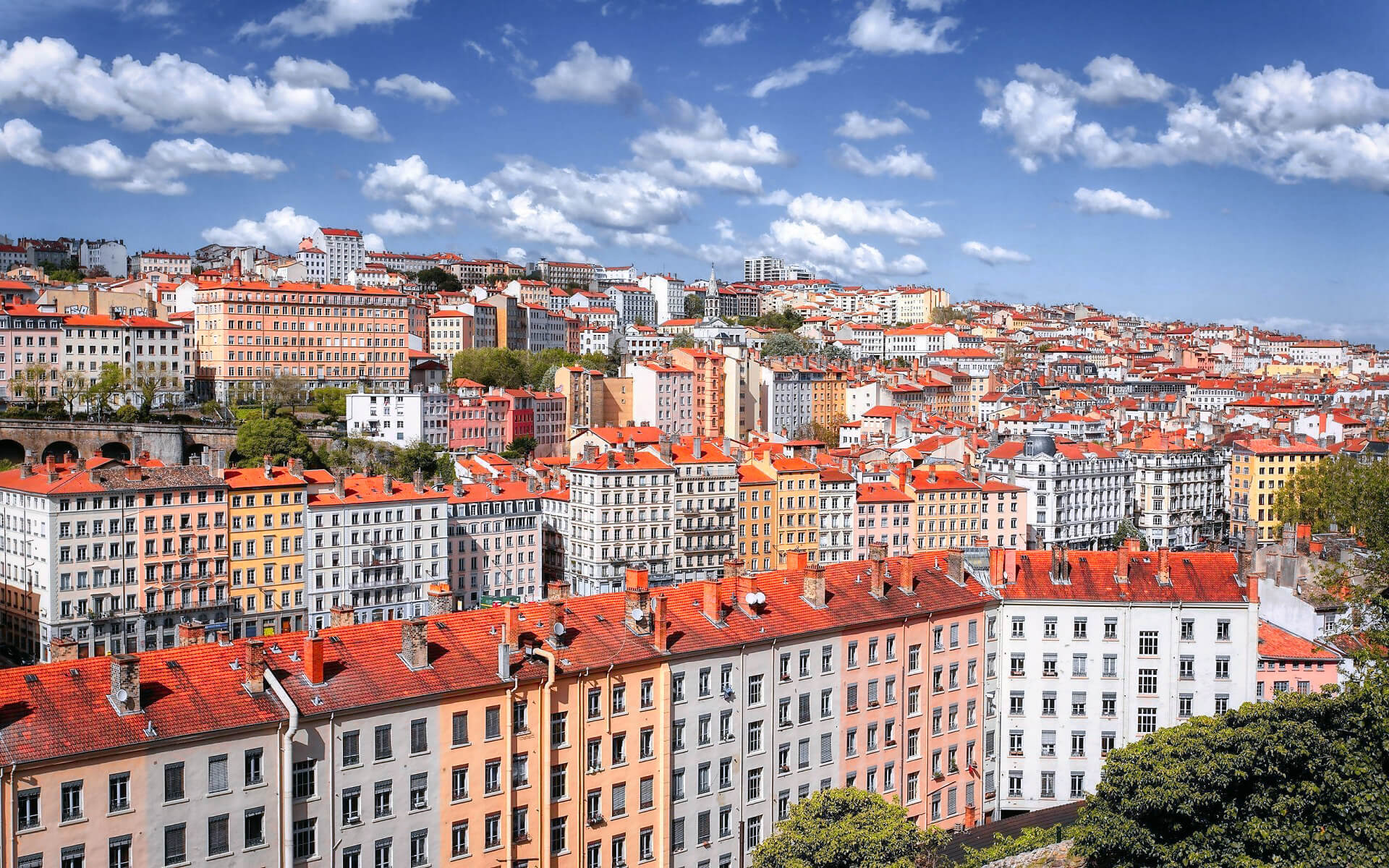 Lyon, France’s third-largest city after Paris and Marseille, had a population of 500,715 in 2013. Lyon is the capital of the Rhône department and the Auvergne-Rhône-Alpes region. Lyon’s metropolitan region has a population of 2,214,068 in 2012, making it the second-largest in France after Paris.

The city is a UNESCO World Heritage Site and is noted for its food and gastronomy, as well as historical and architectural attractions. Lyon was traditionally significant for silk manufacturing and weaving.

Auguste and Louis Lumière devised the cinematographe in Lyon, and it played an important part in the development of cinema. Lyon is also renowned for its iconic light festival, Fête des Lumières, which takes place every 8 December and lasts four days, giving the city the title of Capital of Lights.

Lyon is a key economic center for banking, as well as the chemical, pharmaceutical, and biotech sectors. The city has a major software industry, with a particular emphasis on video games, and has nurtured a rising local start-up sector in recent years. Lyon is home to the worldwide headquarters of Interpol, Euronews, and the International Agency for Cancer Research. In 2011, Lyon was rated 19th in the world and second in France for innovation. In Mercer’s 2015 liveability rankings, it was placed second in France and 39th overall.

Lyon is the capital of France’s Rhône-Alpes region and the Rhône département. Lyon, with a population of half a million people, is the country’s third-largest city, although its metropolitan region is only second to Paris in terms of population. Lyon is best recognized as an economic center, with numerous corporate headquarters and thriving financial, information technology, and natural scientific sectors, but it also boasts a rich historic and architectural history, as well as a vibrant cultural life. It is also regarded as France’s gourmet epicenter.

Lyon, founded by the Romans and with numerous intact historical sites, is the UNESCO template of a heritage city. Lyon is a thriving city that is beginning to capitalize on its distinct architectural, cultural, and culinary legacy, as well as its dynamic demographics and economy and strategic position between Northern and Southern Europe. With an expanding number of students and foreign events, it is becoming increasingly accessible to the rest of the globe.

The city has a population of roughly 470,000 people. However, the city’s direct impact stretches well beyond its official boundaries. The population of Greater Lyon (which comprises 57 towns or communes) should be compared to the population of other large metropolises: around 1,200,000. Lyon and its surrounding metropolitan region are fast increasing and becoming younger as a result of their economic appeal.

Lyon has a humid subtropical climate (Cfa), yet it does have some oceanic traits (Cfb). Lyon’s typical temperature in the coldest month, January, is 3.2 °C (37.8 °F), and in the hottest month, July, is 22 °C (71.6 °F), retaining its subtropical categorization. The average annual precipitation is 830 mm (32.7 in), however the winter months are the driest.

The Rhône and Saône Rivers meet to create a peninsula or “Presqu’île” to the south of the ancient city center. The city center is surrounded by two big hills, one to the west and one to the north, as well as a wide plain that sprawls eastward. The old medieval city (Vieux Lyon) was erected on the west bank of the Saône river at the foot of the Fourvière hill, west of the Presqu’île. This region, as well as parts of the Presqu’île and most of the Croix-Rousse, is a UNESCO World Heritage Site.

Fourvière, sometimes known as “the hill that prays,” is located to the west. The beautifully adorned church of Notre-Dame de Fourvière, various convents, the Archbishop’s house, the Tour métallique (a very visible TV tower emulating the final level of the Eiffel Tower), and a funicular are all located here (a railway on a steep hill).

The Croix-Rousse, sometimes known as “the hill that works,” is located to the north. This neighborhood has historically been home to several tiny silk factories, an industry for which the city was previously famous.

Place Bellecour, situated on the Presqu’île between the two rivers, is France’s third-largest public plaza. From Place Bellecour, the large, pedestrian-only Rue de la République goes north. Many of Lyon’s finest historic residential structures may be found in the second arrondissement, which is also recognized for its concentration of old Lyonnaise Catholic families, notably in the Ainay section of the arrondissement.

East of the Rhône from the Presqu’île is a wide expanse of flat land that houses most of contemporary Lyon and the majority of the city’s population. Part-urban Dieu’s center, which includes the Tour Part-Dieu (nicknamed “The Pencil”), Tour Oxygène, Tour Swiss Life, La Part-Dieu (a retail center), and Lyon Part-Dieu (one of Lyon’s two main train terminals), is located in this neighborhood.

The comparatively rich sixth arrondissement is located north of this neighborhood and is home to the Parc de la Tête d’Or (one of Europe’s biggest urban parks), the renowned Lycée du Parc to the south of the park, and Interpol’s international headquarters on the park’s western boundary. The park offers a free zoo that was recently renovated.

Lyon has a GDP of 62 billion euros, making it the second wealthiest city in France behind Paris. Lyon and its area Rhône-Alpes have one of Europe’s most significant economies and, according to Loughborough University, may be compared to Philadelphia, Mumbai, or Athens in terms of worldwide standing. Lyon is forming alliances to make it easier for new headquarters to be established in the city (ADERLY, Chambre du commerce et d’industrie, Grand Lyon…). Lyon is the 14th most popular city in the European Union for company formation and investment, according to the ECER-Banque Populaire. Biotechnology, software creation, game design, and internet services are all emerging high-tech businesses. Medical research and technology, non-profit organizations, and universities are other key areas. Lyon is home to some of the world’s most dangerous viruses (class 4) in the Jean Merieux research laboratory, including Ebola, Marburg, Nipah, Hendra, and Lassa.

Many companies have their headquarters in Lyon, including Euronews, Lyon Airports, BioMérieux, Sanofi Pasteur, LCL S.A., Boiron, Infogrames, Groupe SEB, Renault Trucks, Iveco Bus, LVL Medical, GL Events, Compagnie Nationale du Rhône, and Norbert Dentressangle, as well as intergovernmental agencies IARC and Interpol. The specialization of particular operations has resulted in the formation of many major business centers: La Part-Dieu, situated in Paris’s third arrondissement, is the city’s second largest commercial district after La Défense, with over 1,600,000 m2 (17,222,256.67 sq ft) of office space and services and over 40,000 employment. Cité Internationale, designed by Renzo Piano, is situated in the 6th arrondissement on the edge of the Parc de la Tête d’Or. Interpol’s global headquarters are situated there. Confluence, located to the south of the old center, is a new economic and cultural growth hotspot.

Tourism is a major element of the Lyon economy, accounting for one billion euros in 2007 and 3.5 million hotel stays in 2006. Approximately 60% of visitors come for business, with the remainder coming for pleasure. Lyon was ranked first in France for hostel business in January 2009. The Fête des Lumières, the Nuits de Fourvière every summer, the Biennale d’art contemporain, and the Nuits Sonores are the most significant events for attracting visitors.

There are 42 other post offices located across Lyon’s neighborhoods.

Because of the significant number of immigrants residing in the Guillotière neighborhood (M: Guillotière) and behind Place des Terreaux (Rue Ste Catherine, Rue Romarin, M: Hôtel de Ville), the majority of internet cafés and phone businesses are located there.

Skiathos (population: 6,088 ) is the major island and access point to the Sporades Islands. Although it is neither the largest nor the most...
Read more

Nagasaki is the capital and biggest city of Nagasaki Prefecture on the Japanese island of Kyushu. It was a center of Portuguese and Dutch...
Read more

Cambodia’s capital and biggest city is Phnom Penh. Phnom Penh, located on the banks of the Tonle Sap and Mekong rivers, has been Cambodia’s...
Read more

Tauranga is the most populated city in New Zealand’s North Island’s Bay of Plenty area. It was founded by Mori in the late 13th...
Read more

La Fortuna de San Carlos is a tiny town in Costa Rica’s northwestern region. It is most known for the adjacent Arenal Volcano (1,633...
Read more