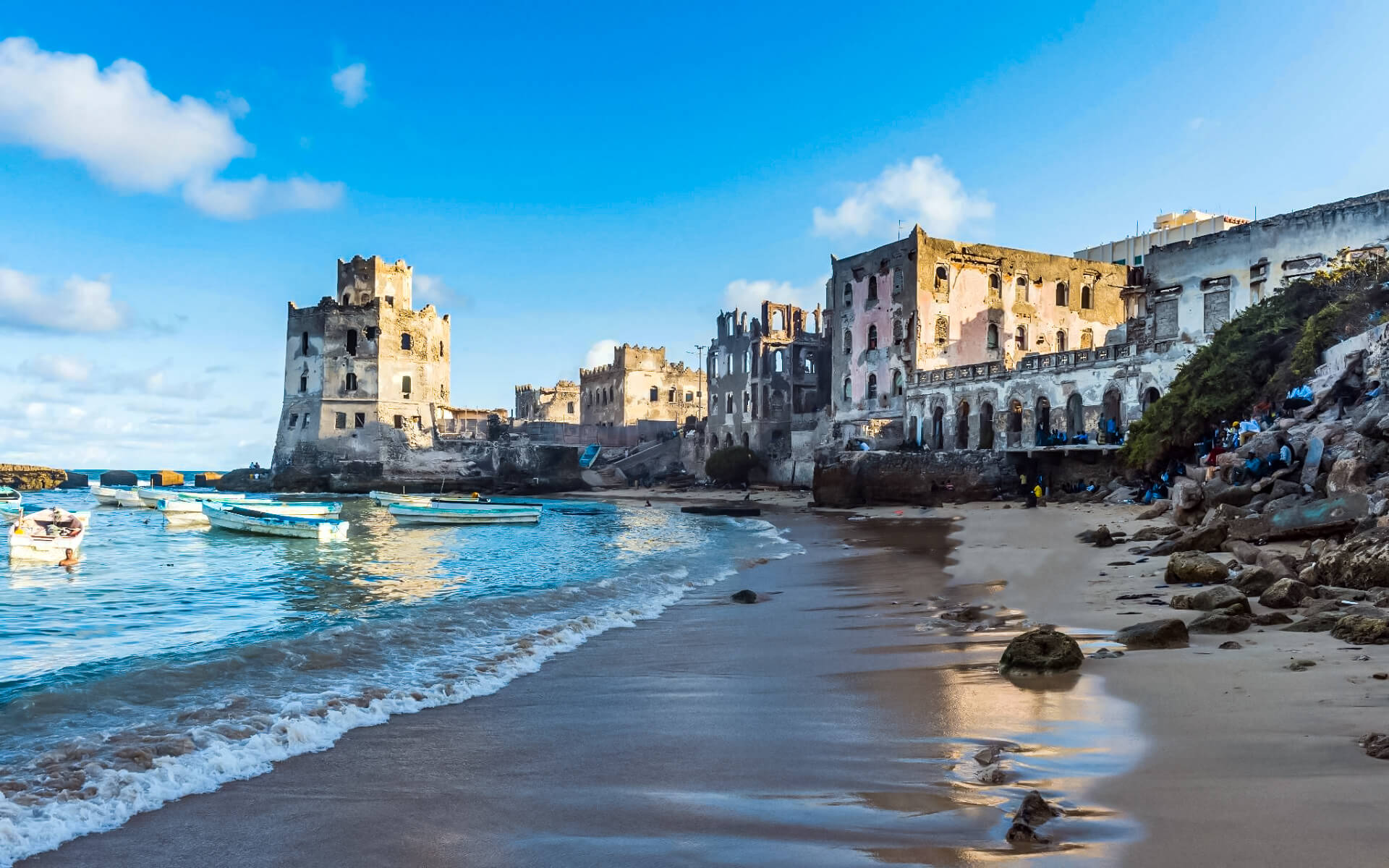 How To Travel To Mogadishu

How To Get Around In Mogadishu

For over two decades, a catastrophic civil conflict has ravaged this once-beautiful metropolis, leaving nothing but rubble in its wake. Various Islamist and/or clan or warlord-affiliated militias have controlled various areas of the city since 1991. When the Union of Islamic Courts assumed complete power in 2006, a few months of reprieve were granted. Six months later, Ethiopia invaded Somalia and re-installed the western-backed Transitional Federal Government. Al-Shabab, a hardline Islamist militia, rapidly grabbed control of Mogadishu, with the government controlling barely a few square blocks. In August 2011, a counter-offensive backed by huge numbers of African Union forces freed the city of insurgents. Although bombings and shootings are still regular, open conflict has ended for the time being. The few government agencies that are able to operate are under great strain due to a severe food crisis and the influx of thousands of migrants.

Mark Bowden’s book Black Hawk Down describes the anarchy of Mogadishu during the early years of the civil war in great detail and accuracy.

For ages, the city of Banaadir, on the Indian Ocean’s shore, has functioned as an important harbor. It has a population of 2,120,000 people as of 2015.

Mogadishu, being Somalia’s capital, is home to a number of key state institutions. It is the headquarters of the Federal Government of Somalia, which was founded in August 2012 and whose legislative arm is the Somalia Federal Parliament. The First Somali Bank was formed in the capital in May 2012.

Mogadishu has a rather dry climate for a city so close to the equator. It has a hot and semi-arid climate.

The average year-round temperature in the city is 27 °C, with average maximums of 30 °C and minimums of 24 °C.

The city receives 3,066 hours of sunshine on average every year, with an average of 8.4 hours of sunlight per day.

Mogadishu is in the Banaadir administrative area (gobol) in southern Somalia, on the Indian Ocean coast of the Horn of Africa.

The territory is contiguous with the city and substantially smaller than Benadir’s ancient province.

The Hamarwein old town, the Bakaara Market, and Gezira Beach are among attractions in the city. Mogadishu’s beautiful beaches, which are home to flourishing coral reefs, are perfect real estate for the city’s first tourist resorts in years.

Mogadishu has long been known as a business and financial hub. The city’s textiles were transported far and wide across the continent, as well as to the Arabian peninsula and as far as the Persian coast, before the arrival of mass-produced fabric from Europe and America.

Since the city’s pacification in mid-2011, Mogadishu’s economy has exploded. The SomalFruit processing facility, as well as the nearby Coca-Cola factory, were also reopened. The First Somali Bank opened in the capital in May 2012, making it the first commercial bank to launch in southern Somalia since 1991.

How To Travel To Mogadishu

How To Get Around In Mogadishu

When it rains, the roads become a muddy mess, traffic lights don't always operate, and there are no traffic regulations or public transportation. Mogadishu's road network is gradually being restored and paved. It's a requirement to have a car with a driver and armed guards. Break-ins at crossroads are...

Arba-Rucun Mosque (Mosque of the Four Pillars). Because of the city's Islamic background, which is one of the few things that the city's numerous warlords can agree on, this 1269 mosque has fared better than the nearby cathedral, and is one of the few structures in the old center that is...

Nasa Hablod Restaurant, located within Hotel Nasa Hablod, and the Sahafi Hotel provide international cuisine. These are most likely the most secure solutions for travelers. The Village,  +252 616692309, e-mail: [email protected] There are multiple locations, including one near the airport. The main restaurant is in the heart of the city, just adjacent to the...

The Bakaara Market (Suuqa Bakaaraha) is Somalia's biggest open market. It was founded in late 1972, under the government of Siad Barre, with the intention of allowing entrepreneurs to sell everyday necessities. Following the civil war, there was an increase in demand for weaponry and ammunition. Everything from handguns...

WARNING!Mogadishu is presently under the authority of the internationally recognized Transitional Government and AU forces, after almost two decades. Since the fall of al Shabab in August 2011, the city has been undergoing extensive rehabilitation, which has been supported by the Somali diaspora and the international community. In reality,...