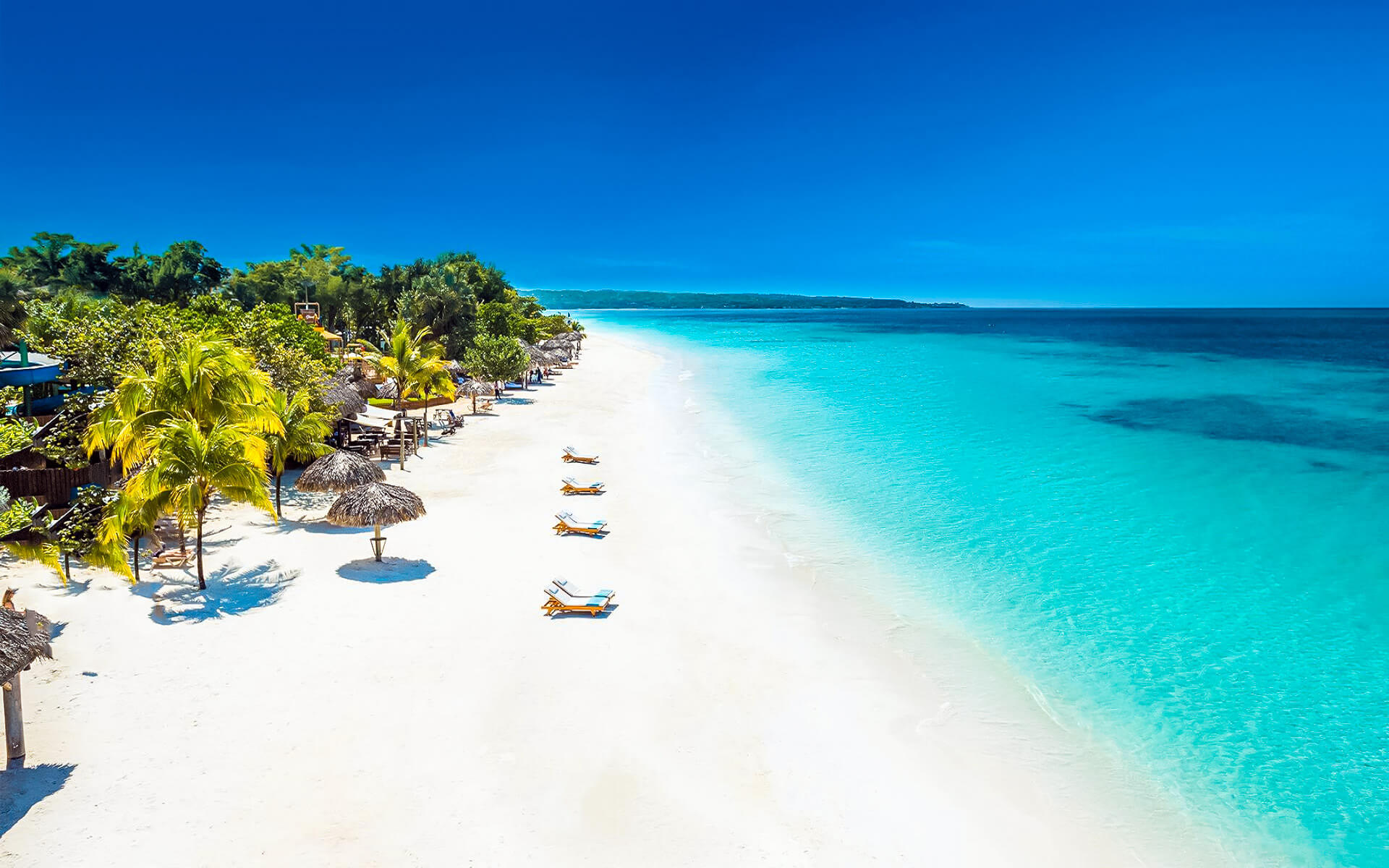 Negril is a popular tourist resort in Western Jamaica, particularly for its white sand beaches.

Negril is renowned for its seven miles of beautiful, white sand beaches and another seven miles of cliffs rising to 40 feet. One of Jamaica’s most picturesque cities, it has a more relaxed vibe than Montego Bay and is more touristic than Ocho Rios. As you stay at a beachfront hotel, you are practically on the beach when you exit the hotel’s beachfront entrance. You’ve almost certainly never seen water this clear or this warm. You’ll be shocked at how far out in the water you can walk before it reaches your neck. The water becomes calmer and the sand becomes whiter (finer grained meaning softer) as you descend (further from town). The whitest sand lies towards the beach’s end, near the all-inclusive resorts. Additionally, the area is well-known for its international janes (female sex tourists).

Negril is a diminutive form of Negrillo (Spanish: Little black one), the name given to it by the Spanish in 1494. According to one account, the Spaniards named the location Anguila Negra due to the abundance of black eels along Negril’s shore, which was abbreviated to Negrillo and subsequently to Negril. While Negril has a lengthy history, it did not achieve widespread popularity until the second part of the twentieth century.

Negril’s growth as a resort destination started in the late 1950s, albeit entry was difficult due to the need for ferries to drop off passengers in Negril Bay, requiring them to wade to shore. The majority of holidaymakers rented rooms inside Jamaican families’ houses or pitched tents in their yards. Daniel Connell was the first to provide more standard vacation housing for these “flower children” when he opened Negril – Palm Grove’s first guest house. The area’s reputation for being pleasant and hospitable increased over time, and the first of several resorts was built in the mid to late 1960s. The Yacht Club at Mary’s Bay on Negril’s West End was Negril’s first hotel.

When the road between Montego Bay and Negril was upgraded in the early 1970s, it aided in the development of Negril as a new vacation destination. It was a two-lane paved road that went around 100 yards (91 meters) inland from two white coral sand beaches, with a tiny settlement at its southern end. The long paved road from the village ran north to Green Island, which was home to many of Negril’s Jamaican workers. It was straight enough to double as a runway for small airplanes, which was why there were lengths of railroad track standing on end along the road’s side – to deter drug smugglers from landing on the road to pick up cheap marijuana cargos.

Following the expansion of Negril’s infrastructure—anticipating the rise of resorts and a growing population—a tiny airfield, the Negril Aerodrome, was erected at Rutland Point in 1976, alongside many modest hotels geared mostly toward North American winter travelers. Europeans also visited Negril, and numerous hotels were created specifically to cater to their needs.

Jamaica’s landscape is varied. The western shore is home to the island’s most beautiful beaches, which run for more than 6 kilometers (3.7 miles) along a sandbar at Negril. It is sometimes referred to as the “7-Mile Beach” by visitors, despite its length of barely more than 4 miles (6.4 kilometers), from the Negril River in the south to Rutland Point in the north.

On the inland side of Negril’s main road, east of the beach, is a swamp known as the Great Morass, through which the Negril River flows. The Royal Palm Reserve, which has protected marshes and woodland, is located inside the Great Morass.

The Negril Coral Reef Preservation Society was founded in 1990 as a non-profit, non-governmental organization to combat the coral reef ecosystem’s continuing destruction. On 4 March 1998, the Negril Marine Park was formally designated, including an area of roughly 160 km2 (62 sq mi) and running from the Davis Cove River in the Parish of Hanover to St. John’s Point in Westmoreland.

Scuba diving and snorkeling are particularly enjoyable in reef-protected locations.

The West End Road is also known as Lighthouse Road due to the presence of a Belgian-built lighthouse that protects seamen from the cliffs. From this western edge of Negril, near the Negril Lighthouse, there are vistas.

For years, various travel publications named Negril’s beach as one of the best 10 beaches in the world. The beach’s length is important – the Seven Mile Beach is comprised of two bays (Bloody Bay to the north and Long Bay to the south). The beach is really little less than 7 miles long, with Bloody Bay being around 2 miles long and Long Bay being slightly less than 5 miles long. The major, all-inclusive resorts are located in Bloody Bay, while Long Bay is home to both all-inclusive resorts and smaller, family-run hotels.

Numerous vendors and businesses are situated near beach resorts; nevertheless, they are concentrated towards the beach’s south end, where there are fewer all-inclusive resorts.

A new roadway connecting Montego Bay and enhanced infrastructure might result in an increase in tourism. As a consequence, more hotels and travel operators continue to invest in Negril’s attractions and excursions. Since the 1980s, it has also grown in popularity as a spring break destination for American college students, as well as a destination for regular vacations in Jamaica.

Significant construction has occurred along the shore in recent years. Couples Swept Away, Couples Negril, Sandals, Beaches, Samsara Hotel, Legends Resort, Grand Lido, Riu Palace Tropical Bay, Riu Club Hotel, and Hedonism II are some of the resorts. The Hedonism II resort is an example of a long-standing hotel/resort that has been rescued from bankruptcy and continues to operate as an adult destination. Additionally, a franchise of Jimmy Buffett’s chain restaurant and bar, Jimmy Buffett’s Margaritaville, has been added, as has a duty-free zone.

In recent years, a significant development comprised of oceanfront villas, two- or three-bedroom townhouses, and studio flats has been erected. This complex, dubbed Little Bay Country Club, is home to some of Jamaica’s richest families.