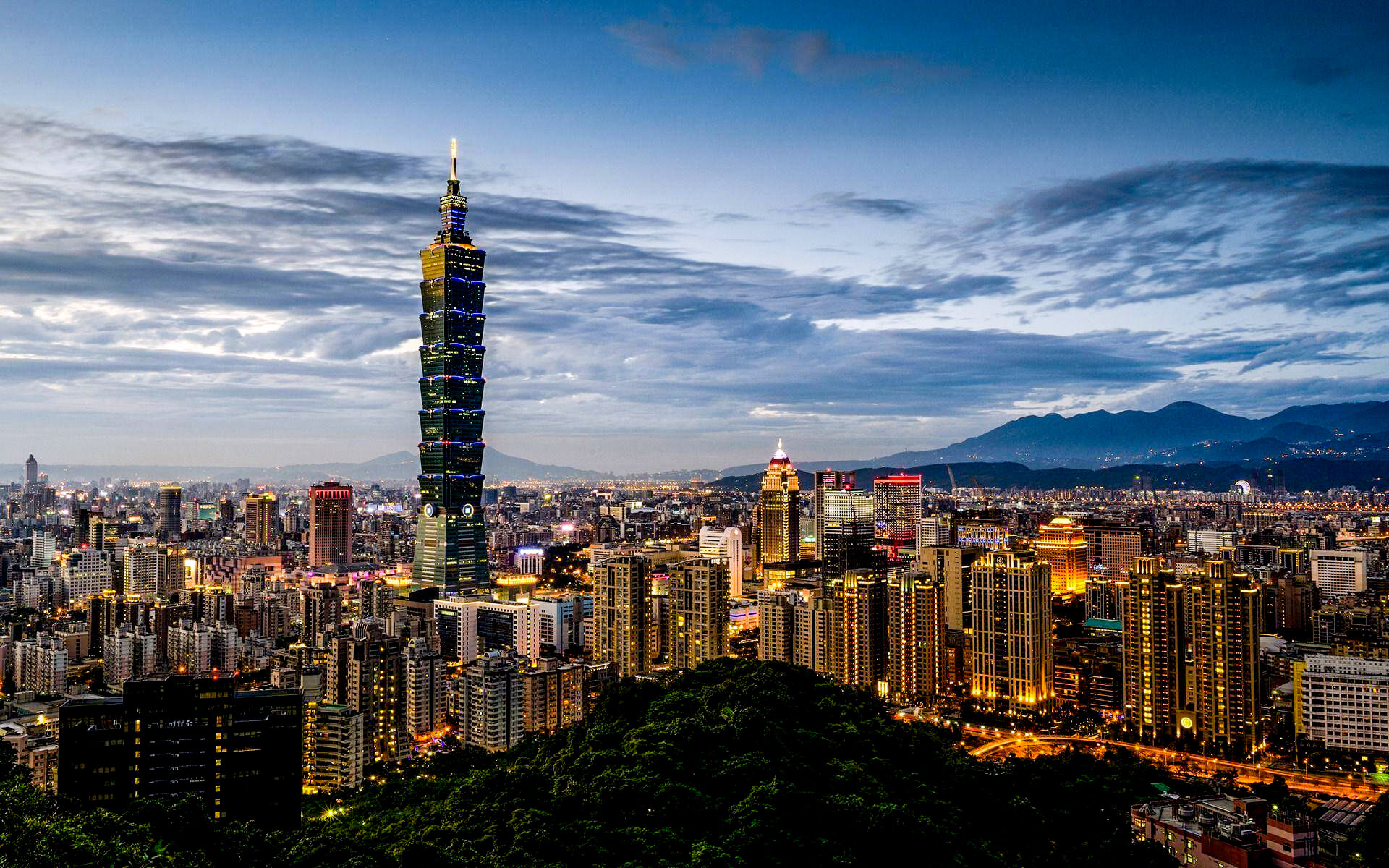 Taipei, formally known as Taipei City, is Taiwan’s capital and a special municipality.

Taipei is the island’s financial, cultural, and administrative capital, located in the northern half of the island in a depression between the Yangming Mountains and the Central Mountains.

Taipei is Taiwan’s political, economic, educational, and cultural capital, as well as one of the world’s main Chinese-speaking centres. Taipei, a worldwide metropolis, is located in a significant high-tech industrial sector. Taipei is connected to the rest of the island through railways, high-speed rail, motorways, airports, and bus routes. Taipei Songshan and Taiwan Taoyuan airports serve the city.

The city is a delicious blend of Chinese, Japanese, and Western influences, active in its own way yet slow by global standards. Aside from architectural and cultural monuments like as Taipei 101 and Longshan Temple, the xiaochi (small snacks) at crowded night markets are an experience your stomach will never forget. The capital is also an excellent starting point for day journeys to hot springs, historic mining villages, and national parks in Northern Taiwan.

Tourism contributes significantly to Taipei’s economy. Over 6.3 million foreign tourists visited Taipei in 2013, making it the 15th most visited city in the world. In 2013, tourists contributed $10.8 billion USD to the city’s economy, ranking ninth in the world and the most of any city in Greater China.

The edifice is located at the east end of Monument Hall Square, which also houses the National Concert Hall and National Theater, as well as nearby parks and the memorial. The Liberty Square landmarks are visible from Taiwan’s Presidential Building in Taipei’s Zhongzheng District.

The National Taiwan Museum, which has been known as 228 Peace Memorial Park since 1999, is located nearby. The Taiwan Governor’s Museum was established on October 24, 1908 by Taiwan’s Japanese colonial administration (1895-1945) as the Taiwan Governor’s Museum. It was inaugurated with a 10,000-item collection to commemorate the inauguration of the island’s North-South Railway.

Just 200 meters away from the National Palace Museum is the wonderfully constructed Shung Ye Museum of Formosan Aborigines. The museum has excellent exhibits of art and historical relics created by Taiwanese aborigines, as well as a variety of multimedia presentations.

The Taipei Fine Arts Museum opened in 1983 as Taiwan’s first museum devoted to contemporary art. The museum is situated in a specially built structure that is inspired by Japanese influences. Since 1940, the majority of the art in the collection has been created by Taiwanese artists. Over 3,000 pieces of art are divided into 13 categories.

Taipei 101 is a 101-story iconic skyscraper that launched in 2004 as the world’s tallest structure, a distinction it maintained for six years until losing to Dubai’s Burj Khalifa. Taipei 101, designed by C.Y. Lee & Partners and built by KTRT Joint Venture, stands 509 meters (1,670 feet) tall from ground to top, making it the world’s first half-kilometer skyscraper.

The National Theater and Concert Hall are located in Taipei’s Liberty Square and showcase performances by both international and indigenous artists. Other notable musical venues are Ximen’s Zhongshan Hall and the Sun Yat-sen Memorial Hall near Taipei 101.

Since the 1930s, Ximending has been a popular retail and entertainment district. A music hall, a historic cinema, and the Red House Theater are among the historic buildings. Karaoke enterprises, art film theatres, wide-release movie theaters, electronic shops, and a range of eateries and fashion apparel stores are all housed in modern buildings. The pedestrian area is extremely popular with teenagers and has been dubbed Taipei’s “Harajuku.”

The recently created Xinyi District is popular with both visitors and residents due to its many entertainment and retail locations, as well as its proximity to Taipei 101, a major tourist destination. The large Shin Kong Mitsukoshi complex, Breeze Center, Bellavita, Taipei 101 mall, Eslite Bookstore’s flagship store (which contains a boutique mall), The Living Mall, ATT retail mall, and the Vieshow Cinemas are among the malls in the region (formerly known as Warner Village). The Xinyi district is also the epicenter of Taipei’s vibrant nightlife, with numerous prominent lounge bars and nightclubs clustered in a small area surrounding the Neo19, ATT 4 FUN, and Taipei 101 towers. The most popular locations to come here are lounge bars like Barcode and nightclubs like Spark and Myst.

Taipei has a large network of parks, green areas, and natural preserves. Yangmingshan National Park, Taipei Zoo, and Da-an Forest Park are among the notable parks and forestry areas in and surrounding the city. Yangmingshan National Park (about 10 kilometers (6.2 miles) north of the city) is well-known for its cherry blossoms, hot springs, and sulfur deposits. It is famed writer Lin Yutang’s house, Chiang Kai-vacation shek’s residence, foreign ambassadors’ homes, the Chinese Culture University, the meeting venue of the now-defunct National Assembly of the Republic of China, and the Kuomintang Party Archives. The Taipei Zoo was created in 1914 and has a total area of 165 hectares dedicated to animal conservation.

Bitan is well-known for water activities and boating. Tamsui is a well-known seaside tourist town. From Taipei, ocean beaches may be reached in a variety of routes.

Taipei is densely packed with elaborate temples dedicated to Buddhist, Taoist, and Chinese folk religion deities. The Longshan Temple, situated in the Wanhua District and established in 1738, is an example of architecture with southern Chinese influences that is typical on older structures in Taiwan.

Because of the great number of temples, shrines, churches, and mosques on Xinsheng South Road, it is known as the “Road to Heaven.”

Summers are lengthy, hot, and humid, with major rainstorms and typhoons on occasion, while winters are brief, normally warm, and foggy owing to the northeasterly winds from the huge Siberian High being enhanced by the pooling of this colder air in the Taipei Basin.

Taiwan is influenced by the Pacific typhoon season, which occurs between June and October because to its position in the Pacific Ocean.

Taipei City is situated in northern Taiwan’s Taipei Basin. It is bounded on the south by the Xindian River and on the west by the Tamsui River. The usually low-lying topography of the municipality’s center parts rises steeply to the south and east, and notably to the north, where it reaches 1,120 metres (3,675 ft) at Cising Mountain, Taiwan’s tallest (inactive) volcano in Yangmingshan National Park. Shilin and Beitou are northern districts that stretch north of the Keelung River and are bounded by Yangmingshan National Park. Taipei’s city borders include an area that ranks sixteenth out of twenty-five counties and cities in Taiwan.

To the northeast of the city, two peaks, Cising Mountain and Mt. Datun, rise. Cising Mountain is the highest mountain on the margin of the Taipei Basin, with a main peak of 1,120 meters, and is part of the Tatun Volcano Group (3,670 ft). The main summit of Mt. Datun is 1,092 meters high (3,583 ft). The western half of Yangmingshan National Park, ranging from Mt. Datun northward to Mt. Caigongkeng, is made up of these extinct volcanoes. The region includes the swampy Datun Pond, which is located on a large saddle between two mountains.

The Songshan Hills and the Qingshui Ravine create a beautiful wooded barrier to the southeast of the city.

Taipei, as the heart of Taiwan’s biggest conurbation, has been at the core of the country’s fast economic growth and has now become one of the world’s leading cities in the manufacturing of high technology and its components. This is part of the so-called Taiwan Miracle, which has seen the city develop dramatically since foreign direct investment began in the 1960s. Taiwan has become a creditor economy, with approximately US$403 billion in foreign currency reserves as of December 2012.

Despite the Asian financial crisis, the economy is still growing at a rate of roughly 5% per year, with almost full employment and low inflation.

Taipei and its surroundings have long been Taiwan’s most important industrial region, including secondary and tertiary industries. The majority of the country’s main textile and clothing companies are situated there, as are other businesses such as the production of electronic goods and components, electrical apparatus and equipment, printed materials, precision equipment, and foods and drinks. Shihlin Electric, CipherLab, and Insyde Software are a few examples. Shipbuilding, including yachts and other recreational ships, takes place in Keelung, a harbor located northeast of the city.

Services, such as those relating to trade, transportation, and finance, have grown in importance. Tourism is a minor but important part of the local economy. Taipei has numerous popular tourist destinations and contributes significantly to Taiwan’s $6.8 billion tourism sector.

Internet cafés abound, particularly amid the tangle of lanes between Taipei Main Station and Peace Park. You may have to search around (and up and down since many are on upper levels or in the basement) before you discover one. Some computers need a coin to run. In Chinese, internet cafés are known as wang-ka (a mix of wang, the Chinese word for “net,” and ka, an acronym for “cafe”).

Wifly, a city-wide Wi-Fi service, is also available in Taipei. For a nominal charge, you may get a card that allows you to use the internet almost anyplace in the city for a day or a month. The card is available for purchase at Starbucks Coffee Shops, 7-11 outlets, and online for NT$100 for one day of unrestricted access and NT$500 for 31 days of unlimited access.

TPE-Free is a free Wi-Fi network available in Taipei. It is accessible in the majority of public areas in Taipei, including MRT stations, city administrative district offices, city libraries, and so on. With an ID, you must register at any tourist information office. There is normally a power outlet and a USB connector to charge your electrical gadgets at free Wi-Fi hotspots.