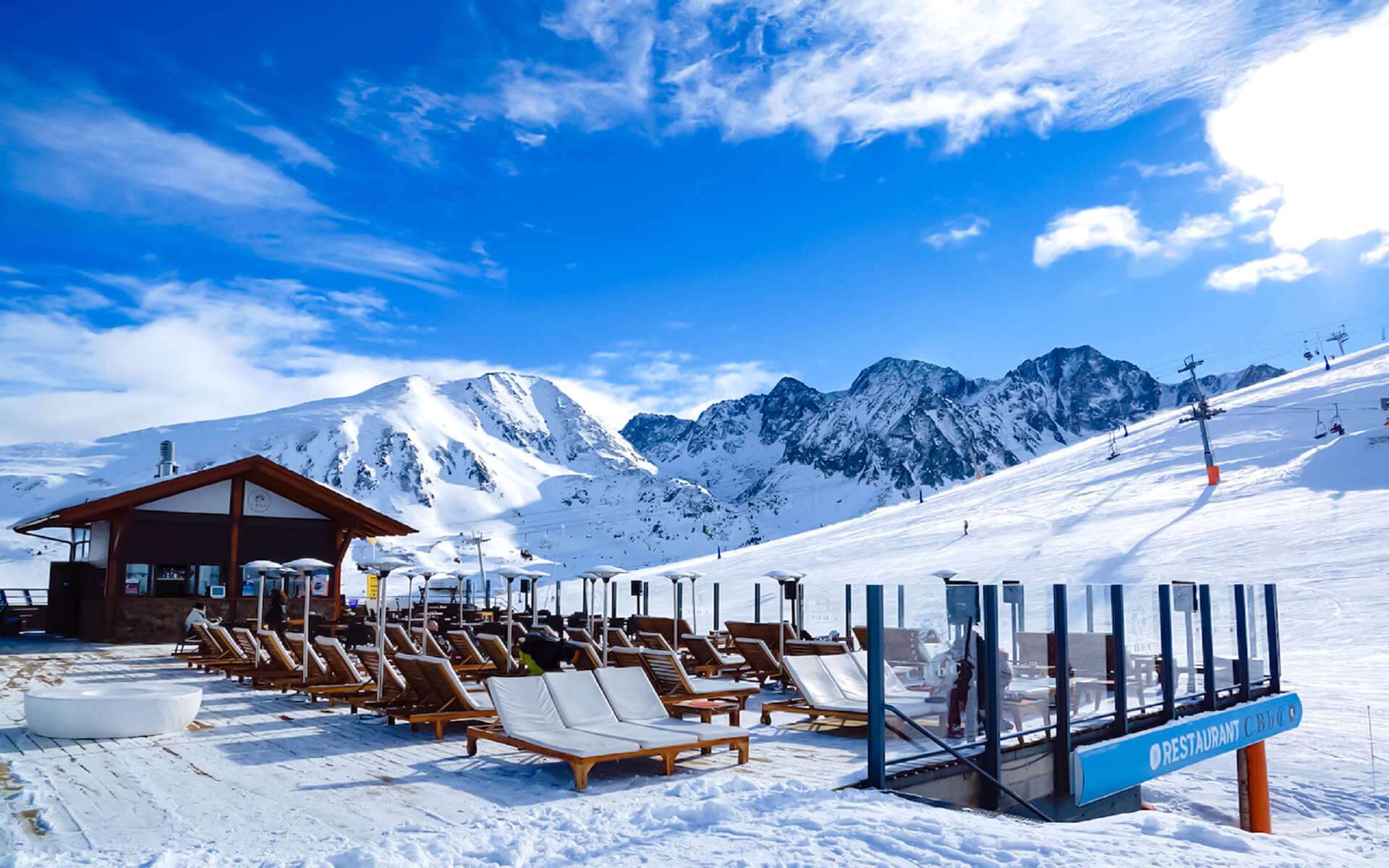 Pas de la Casa is not only the highest ski resort in the Pyrenees (at 2100m), but it is also the sunniest. The après ski scene in the resort is perhaps one of the greatest in Europe, and the area also has some of the best shopping in the nation.

Francesc Viladomat, a ski icon, erected the first lift in 1956, and the resort has grown ever since. When the resorts joined forces (and connected lifts) with Soldeu-el Tarter in 2003, they became known as Grandvalira, and established the biggest ski area in the Pyrenees.

Pas is physically quite close-knit; the major clubs, restaurants, and hotels are all clustered around a central strip, making everything very accessible. With affordable drink costs, a plethora of free shots, and late opening hours around the resort, the après ski alone is reason enough to come.

In fact, one of the few places where Pas de La Casa falls short is in its architecture, which looks to have been influenced by an art deco housing project. However, after a few complimentary shots (which are often distributed like confetti), your hotel’s aesthetic attractiveness is likely to become much less of a problem…

With so much emphasis on the off-piste activities, it’s easy to overlook the skiing you’ll have access to. There are 210km of routes for all levels, supplied by 64 contemporary lifts that can transport 100,700 snow enthusiasts up the mountain per hour. The region include Soldeu-El Tarter, Encamp, Grau Roig, Canillo, and Pas, as well as some spectacular freeriding, three well-maintained snow parks, a permanent boarder cross course, and three snow circuits for children.

All of this makes it a great destination for budget skiers or parties searching for a resort where there’s just as much excitement off the slopes as there is on them. It may lack some of the usual ski resort charm, but if you’re looking for an economical and exciting ski vacation, it surely checks all the boxes.

While the snow isn’t as guaranteed as in other of Europe’s major resorts, it is the greatest in the Pyrenees, and you’ll have a terrific time off the slopes all year. Visiting during peak season is much less stressful, costly, and busy than you would imagine, and the resort’s infrastructure comfortably accommodates an increase in guests. The key holiday periods in Andorra are usually enjoyable—New Year’s Eve is particularly well—so a visit at these times is strongly advised. The finest snow conditions are in February and early March, so an inexpensive half-term vacation is definitely in order. Late-season snow isn’t always ideal, but with so many outdoor restaurants and pubs, you’re practically certain to return home with a tan.

As soon as you leave the hamlet, you’ll notice the range of terrain: from the six-seater Font Negre to the smaller Costa Rodonda, you’ll be able to reach one of the region’s snowparks, the boardercross circuit, a novices zone, and a freeride area.

The beginners section at the valley’s base includes a few really soft lifts and easy nursery slopes, and at the end of the day, all abilities of skier can ski straight down into the town — the red/blue Tubs will take you nearly to your hotel’s door.

There’s more challenging terrain just over the mountain at Grau Roig—most of the routes here are red and black—but the easy blue Pastora, which leads you down into the center, is the preferred route for many intermediates on their trip over to Soldeu.

The two six-seater Pla de les Pedres lifts, which open up both sides of the mountain, are among the most popular in resort. The surrounding regions are an intermediate’s dream, with a large range of red and blue runs—if you’re good at reading piste maps, you’ll be able to choose a route that begins at the summit of the Collada D’Enradort and winds its way all the way down to the town of Soldeu.

Advanced skiers and boarders will feel right at home here, with the Snowpark El Tarter (expertly maintained by the Coliflor freestyle team), several tricky mogul courses, and additional dedicated freeriding sections. Grandvalira has four snowparks in the area, and with some of the longest riding hours (the parks are typically open until late into the evening), incredible quantities of sunlight, and great park grooming, it’s a terrific spot for aspiring park skiers.

Due to the resort’s high altitude, it seldom shuts before the end of April. Grandvalira has 1013 snow cannons, which ensure snow on more than 65 percent of the ski area.

Vallnord is linked not only with skiing and snowboarding, but also with a variety of winter activities and snowbound pleasure! Aside from the traditional winter activities like snowshoe treks, sledding, and winter walks, there are a plethora of other things to explore in the region. If you want to ride the mountain on something a little different, airboarding or ski-biking could be for you. On the Snow Snake, groups or families may even plough down the mountain together. Snowmobile and snow buggy trips are also available if you want to explore the area with an engine under you. True adrenaline seekers may even attempt bungee jumping or speed riding – a cross between skiing and paragliding.

Despite the often rowdy après ski scene inside the resort, a family excursion to Pas de La Casa has a lot to offer. The laidback ambiance makes it a fantastic site for a first-time family holiday, and with far cheaper expenses than a more mainstream destination, it’ll also be lot nicer on the wallet.

Ski tickets, equipment rental, and tuition are all less costly than at many of the major slopes, so it’s a good alternative if you’re not sure how the kids will react to the snow. In the evenings, there are lots of family-friendly restaurants to enjoy, with most providing a variety of European favorites, from fondue and raclettes at La Gratinada to more traditional Andorran dishes at Costa Rodonda.

The slopes are particularly great for families, especially the mixed ability runs. The beginner area at the base of Pas de La Casa is ideal for those taking their first steps on snow, intermediates will have access to the entire mountain thanks to a fantastic network of blue and red runs, and any adventurous youngsters will quickly feel at home in one of the four snow parks or numerous freeriding areas.

Pas de La Casa is without a doubt one of Europe’s top venues for an all-singing, all-dancing group excursion. Grandvalira is the biggest ski region in the Pyrenees, so there’s enough of terrain to cover throughout the day, and there’s enough entertainment off the slopes to keep the party going for hours.

The moderate blues just outside the resort area will reassure any newbies, and those who have never skied before will find it easy to find their feet on the beginning regions. Tuition and equipment rental are also reasonably priced, making it an ideal spot for first-time skiers. Intermediates will be able to ski the whole region with ease—the routes from Pas de La Casa to Soldeu, through Grau Roig, are jam-packed with lengthy blues and reds—while the group’s specialists will appreciate the four snowparks and freeride zones, as well as the numerous groomed black lines.

Off the slopes, there’s even more pleasure to be had. The duty free drinks pricing and late bar opening hours give you an indication of what to expect- the Kamikaze Surf Bar is often open until 3am and is located on the slopes above the resort – and many of the resort’s customers spend more time in the bars than on the slopes. You’re certain to wind up at the Underground pub at least once or twice, but if you want a calmer night, Paddy’s Irish bar is the place to be.

Après-ski in Pas de la Casa is highly exciting because of the cheap prices and largely young clientele! Many of the resort’s well-known taverns and clubs are just a short distance apart, making them conveniently accessible on foot. Pas de la Casa offers a party for everyone, from country pubs to classy bars and trendy clubs. Many restaurants provide excellent sustenance for gourmet delights, including regional as well as international delicacies.

Individuals who wish to stay active off the slopes may participate in a variety of activities ranging from snowmobile or dog sled expeditions to paintball to snowshoe trekking or snow bike riding.