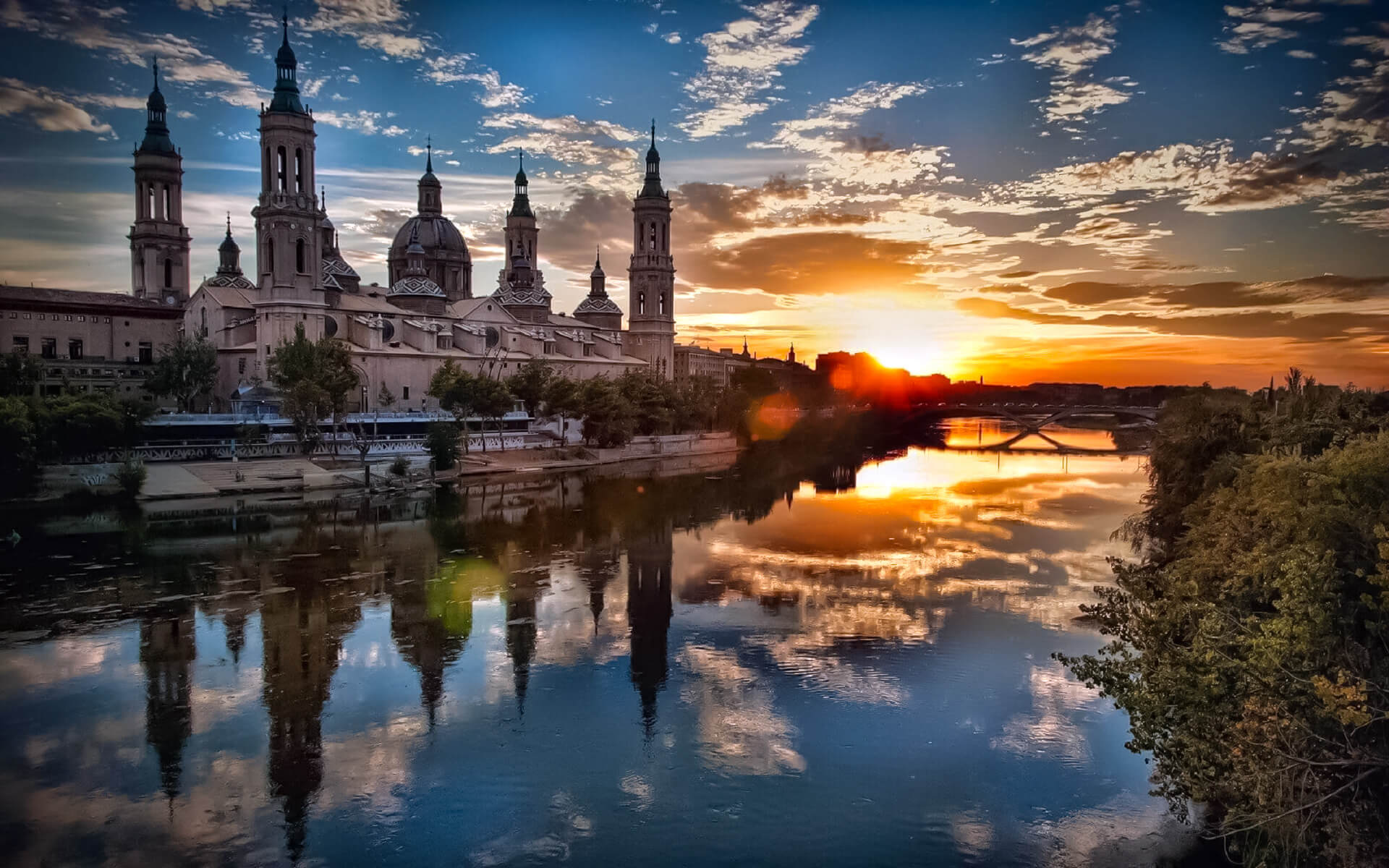 Zaragoza is the capital city of the province of Zaragoza and the autonomous community of Aragon in Spain. It is located in the midst of both Aragon and the Ebro basin, between the Ebro river and its tributaries, the Huerva and the Gállego.

On September 1, 2010, the city of Zaragoza had a population of 701,090 people living inside its administrative boundaries on a land area of 1,062.64 square kilometers (410.29 square miles), ranking seventh in Spain. It is the European Union’s 32nd most populated municipality. In 2006, the metropolitan area’s population was predicted to be 783,763 people. More over half of the Aragonese population lives in the municipality. The city is located 199 meters (653 feet) above sea level.

In the summer of 2008, Zaragoza held Expo 2008, a world’s fair on water and sustainable development. In 2012, it was again a contender for European Capital of Culture.

The city is well-known for its folklore, regional cuisine, and structures like as the Basilica del Pilar, La Seo Cathedral, and the Aljafera Palace. Several other buildings, including La Seo and the Aljafera, are part of Aragon’s Mudéjar Architecture, which is a UNESCO World Heritage Site. The Fiestas del Pilar are one of Spain’s most popular celebrations.

Zaragoza is a welcoming city situated halfway between Madrid, Barcelona, Bilbao, Valencia, and Toulouse. In people’s rush to explore the larger cities, this hidden treasure is often passed by without a second glance. Visitors are welcomed by the city’s rich culture, shopping, dining, and sightseeing. With almost 2,000 years of history, the city has one of the most significant historical and cultural legacies in Spain. It is located in Aragon, one of Spain’s former kingdoms.

Zaragoza has a lot to offer in terms of shopping, with most key streets lined with stores.

The shopping district extends from the Residencial Paraiso in Sagasta to the Plaza de Espaa. The most opulent stores may be found on Francisco de Vitoria, San Ignacio de Loyola, Cadiz, Isaac Peral, and the streets that connect them.

Spring (April to mid-June) and fall are the finest times to visit Zaragoza (Sept-Oct). The days might be rather hot in late June and July, but the city comes alive in the evenings with people going out for dinner or having a beverage with friends on a patio. In August, the city is almost desolate, with most residents on vacation in the mountains or along the coast, and more than half of the taverns, restaurants, and small businesses closed.

El Pilar, the city’s largest festival, takes place every year during the week of October 12th, with several concerts, shows, and street animations. It is also the finest time to visit Zaragoza to attend a bullfight.

Although not in the same league as its equivalents in Andalucia or Calanda, the Easter week is highly picturesque, with multiple processions passing through the city center every day, complete with spectacular sculptures, black-dressed prayer ladies, and hundreds of hooded individuals pounding drums.

Summer days in Zaragoza may be quite hot. Here are a few ideas if you’d rather rest by the pool than go on a sightseeing tour. Zaragoza’s public swimming pools are typically clean and well-kept. The entry charge for an adult is around €3. Open-air pools are usually open until 9 or 10 p.m.

Zaragoza has a fairly dry Continental Mediterranean climate with chilly winters and scorching summers. Rainfall is uncommon, averaging 318 mm per year and largely falling in the spring. Summer is dry, with just a few storms in the late afternoon. Temperatures in July and August are regularly over 30°C (86°F), with a few days each year surpassing 40°C (104°F). On such days, you’ll soon embrace the concept of siesta: hiding away after lunch, during the warmest portion of the day, to spend the afternoons and nights at a pleasant 18-22°C.

Winter temperatures are typically between 0 and 10°C (32-50°F), with occasional frosts at night. Snow only appears every few of years, although fog is typical (about 20 days from November to January). The Cierzo, a cold and dry wind blowing from the northwest that is rather typical on clear days and may make your stay quite miserable, is the sole negative aspect. Be wary of bright days in spring and fall; if the Cierzo blows, you’ll be sorry you didn’t bring warm garments.

In addition to the ideal geographical location, an Opel plant was established at 1982 in Figueruelas, a neighboring small community. Opel, along with Balay, which manufactures household appliances; CAF (Construcciones y Auxiliar de Ferrocarriles S.A.), which builds railway engines for both the national and international markets; SAICA and Torraspapel in the stationery sector; and various other local companies such as Pikolin, Lacasa, and Imaginarium SA, became one of the regional economy’s main pillars as the agrarian economy declined.

The city’s economy benefitted from initiatives such as Expo 2008, the official World’s Fair, held between 14 June and 14 September 2008, with the subject of water and sustainable development, Plataforma Logistica de Zaragoza (PLAZA), and the Parque Tecnológico de Reciclado (PTR). Furthermore, it has been a city through which the AVE high-speed train operates since December 2003. Zaragoza Airport is now the fourth-largest freight hub in the Iberian Peninsula, behind only Madrid, Barcelona, and Lisbon.

The Spanish Air Force has a base at Zaragoza, which was shared with the US Air Force until 1994. The facility was known as Zaragoza Air Base in English. At the site, the Spanish Air Force kept an F/A-18 Hornet wing. With the exception of a few KC-135s, no American aircraft wings were permanently located there, but it functioned as a training facility for American fighter units from all across Europe. It also serves as the major headquarters for the Spanish Land Army, housing the Academia General Militar, as well as a number of brigades at San Gregorio and other garrisons.