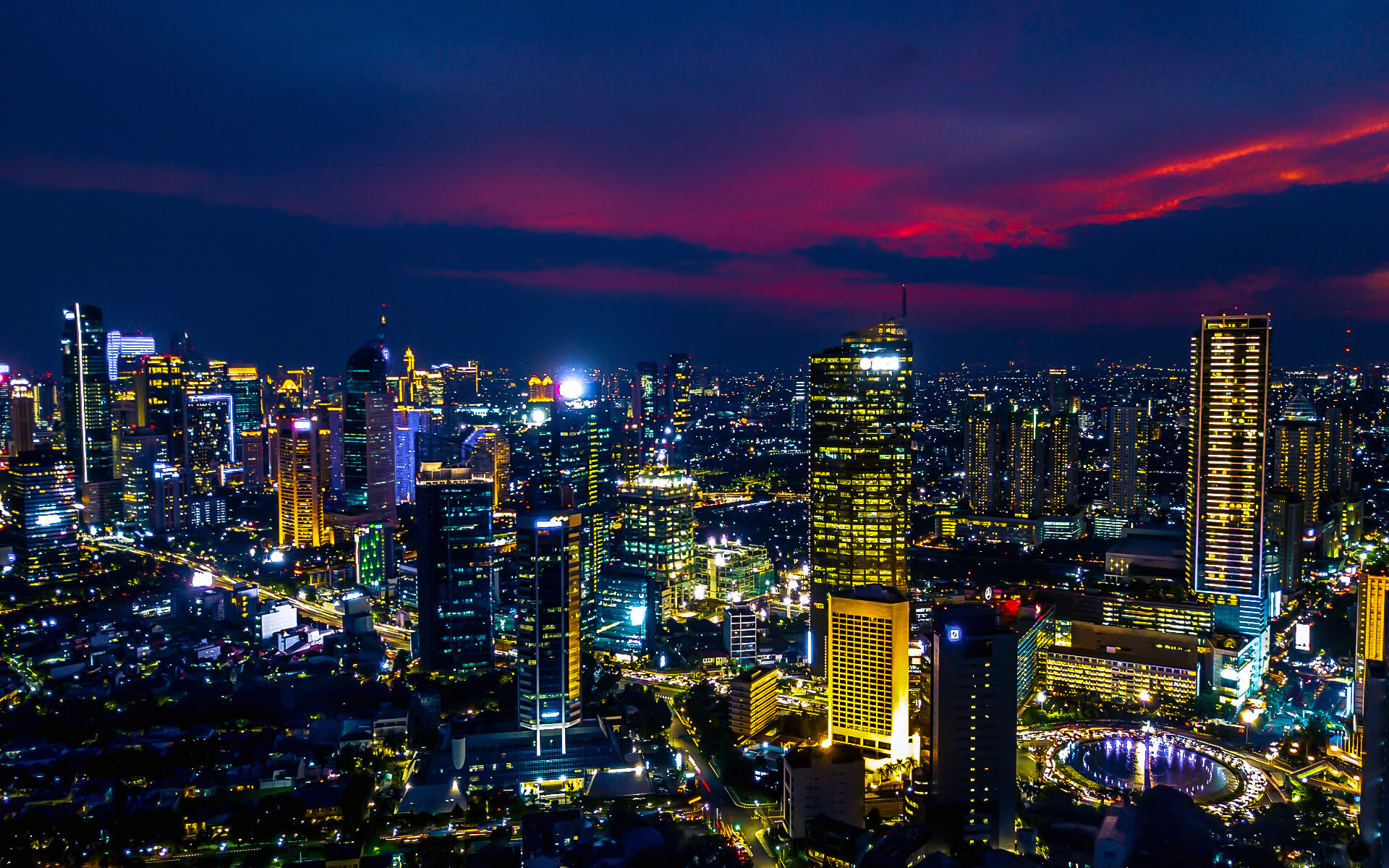 Jakarta is the capital and biggest city of Indonesia (though it is officially a province), as well as one of the world’s most populated urban agglomerations.

Jakarta, located on the northwest coast of Java, is the country’s economic, cultural, and political center, with a population of 10,075,310 people.

The city itself is the size of Singapore, and its population is similar to that of Portugal (around 10 million) The Big Durian, a euphemism for New York’s Big Apple, with its concrete jungle (number 17 of the world’s cities with skyscrapers), traffic chaos, and heated dirty air may entice you to go as soon as possible, but what awaits you inside will alter your viewpoint! One of Asia’s most dynamic and cosmopolitan towns, J-Town offers a busy nightlife, exciting shopping malls, a variety of restaurants, refreshing greeneries, cultural diversity, and a rich history that caters to all budgets and levels of enjoyment.

Jakarta is the nation’s shopping capital and one of the greatest locations to shop in South East Asia. There are various retail complexes and traditional marketplaces in the city. Jakarta boasts the world’s biggest retail mall floor space inside a single city, covering 550 hectares. Plaza Indonesia, Grand Indonesia Shopping Town, Plaza Senayan, Senayan City, and Pacific Place all provide a large range of premium goods. Mall Taman Anggrek, as well as Ciputra World Jakarta, which has Artpreneur – A place of destination to discover, explore, experience, and celebrate Indonesian and International Art, Pondok Indah Mall, Mal Kelapa Gading, and Central Park Jakarta, cater high-street brands such as Topshop and Zara from the United Kingdom and Europe.

The majority of visitors to Jakarta are domestic tourists from all throughout Indonesia. Jakarta, being Indonesia’s gateway, is often used as a stopover for international travelers en route to major tourist spots in Indonesia, such as Bali and Yogyakarta. Tourists are drawn to Taman Mini Indonesia Indah, Ragunan Zoo, Sunda Kelapa old port, and the Ancol Dreamland complex on Jakarta Bay, which includes the Dunia Fantasi (Fantasy World) theme park, Sea World, Atlantis Water Adventure, and Gelanggang Samudra, in addition to the monuments, landmarks, and museums around Merdeka Square and Jakarta Old Town.

Tourism is generating an increasing amount of revenue for the city. Tourism contributed 2.6 trillion rupiah (US$268.5 million) to the city’s total direct revenue of 17.83 trillion rupiah in 2012, a 17.9% increase over 2011. Tourism stakeholders anticipate more promotion of Jakarta as a tourist destination.

The Jakarta Government began offering double-decker bus tours in Central Jakarta in February 2014. The itinerary of the buses includes tourist landmarks such as Monas, Istiqlal Mosque, the Cathedral, the National Museum, Sarinah, and Plaza Indonesia, as well as Grand Indonesia retail malls.

The majority of Jakarta’s landmarks, monuments, and sculptures were constructed during the Sukarno era starting in the 1960s and finished during the Suharto era, however some date back to the colonial Dutch East Indies period. The 132 m (433 ft) tall obelisk of National Monument (Monumen Nasional or Monas) situated in the center of Merdeka Square, Jakarta’s Central Park, is the most recognized Jakarta landmark that has become the city’s emblem. A Mahabharata-themed Arjuna Wijaya chariot monument and fountain may be seen in the southwest corner. Further south on Jalan Thamrin, Jakarta’s major thoroughfare, the Selamat Datang monument rests atop the fountain in the center of the Hotel Indonesia circle. Other notable structures in Jakarta include the Istiqlal Mosque, the Jakarta Cathedral, and the Immanuel Church. The old Batavia Stadhuis in Jakarta Old Town also serves as a landmark for the city. The Wisma 46 skyscraper in Central Jakarta is now Indonesia’s second tallest structure.

Some of Jakarta’s sculptures and monuments are nationalist in nature, such as the West Irian Liberation Monument and the Dirgantara Statue. Several Indonesian national heroes are remembered in statues, including Diponegoro and Kartini in Merdeka Square, Sudirman and Thamrin in their respective avenue, and Sukarno and Hatta at the Proclamation Monument, which is also positioned at the entrance to Soekarno–Hatta International Airport.

The climate in Jakarta is tropical monsoon.

Despite its proximity to the equator, the city maintains distinct rainy and dry seasons.

The wet season in Jakarta lasts for the bulk of the year, from October to May.

The city’s dry season lasts for four months (June through September) (each of these 4 months has an average monthly rainfall of less than 100 mm).

Jakarta is situated on Java’s northwest coast, near the mouth of the Ciliwung River on Jakarta Bay, an inlet of the Java Sea. The Jakarta Special District has a land area of 662 km2 (256 sq mi) and a sea area of 6,977 km2 (2,694 sq mi). The Thousand Islands are situated in Jakarta Bay, north of the city, and are officially part of Jakarta.

Jakarta is located in a low, flat basin with elevations ranging from 2 to 50 metres (7 to 164 feet), with an average height of 8 metres (26 feet) above sea level. 40 percent of Jakarta, primarily in the north, lies below sea level, whereas the south is very mountainous. Rivers run from the Puncak mountains to the south of the city, through the city, and northwards to the Java Sea; the Ciliwung River is the most important[clarification required], dividing the city into western and eastern realms. The Pesanggrahan and Sunter rivers are two others.

All of these rivers, along with rainy season precipitation and inadequate drainage owing to blockage, render Jakarta vulnerable to floods. Furthermore, Jakarta sinks about 5 to 10 centimetres every year, reaching up to 20 centimetres in the northern coastal districts. The Netherlands will contribute $4 million to a feasibility study to construct a dike around Jakarta Bay to help mitigate the danger from the water. To protect against saltwater, the ring dike will be outfitted with a pumping system and retention zones. In addition, the dike will serve as a toll road. The project is scheduled to be completed by 2025.

The expense of life in the city is increasing. Land is pricey, and rentals are exorbitant. Industrial growth and new housing are often carried out on the outskirts, while commerce and banking remain centered in the city center.

The luxury property market in Jakarta is thriving. Investment in the property industry increased significantly, including offices, commercial buildings, new town construction, and highrise residences and hotels. Knight Frank, a global real estate consultant headquartered in London, said in 2014 that Jakarta provided the greatest return on high-end property investment in the world in 2013, citing supply constraints and a drastically depreciated currency as causes.

If you bring your own laptop, you may be able to connect to networks in several of the capital’s shopping centers. Access codes may be obtained at the information desk. Restaurants, coffee shops, and convenience stores also provide free Wi-Fi. Most hotels also provide free or paid wifi connections in their public areas or rooms; enquire before booking.

Internet cafés are accessible in most sections of the city, particularly around colleges, residential areas, and major retail malls, and cost between Rp4,000 and Rp10,000 per hour. While the cheaper ones will have a sluggish dial-up connection, some will have broadband high-speed capabilities, which are often utilized by teenagers for online gaming. If you plan on using the internet for extended periods of time, look for “happy hour” offers, which allow you to access the Internet for up to Rp30,000 for as long as you like.

Jakarta will serve as a test site for Indonesia’s forthcoming 4G LTE network expansion. However, most providers have yet to offer the service. Bolt is the only brand that has entered the tournament. It provides a portable Wi-Fi modem and a rechargeable internet limit for Rp200,000, which is low by Western standards.

021 is the area code for Jakarta and the surrounding region. If you’re calling another number in the same area from a landline, you don’t need to dial the area code. When phoning from other parts of Indonesia, omit the 0 prefix.

Wartel or telephone stores are common on Jakarta’s streets, however they are quickly disappearing due to the proliferation of mobile phones. If you want to avoid the expensive roaming costs (and also make a lot of calls), you may purchase an old phone for $10 to $15 plus your mobile number’s balance, while the card itself is reasonably cheap or free. Most locations have excellent coverage.

Public phones are still regularly seen on sidewalks. If you come across a public phone, raise the receiver and look at the number displayed near the keyboard. Do not input money if the number is not 000, since the phone is damaged. They are typically not, but when they are, they are incredibly inexpensive (just Rp100 each minute).

Pos Indonesia, a state-owned company, provides postal service. There are no postal boxes, however there are mobile counters in a van, or you may go to the post office. FedEx, DH, and UPS, among others, provide drop-by package delivery via a third-party service.

If you want to call it such, the emergency services in Indonesia are the greatest. Many hospitals provide 24-hour emergency services, however their equipment may not be as modern as that of their foreign counterparts. The international emergency hotline 112 is operational and will connect you to the appropriate agencies.