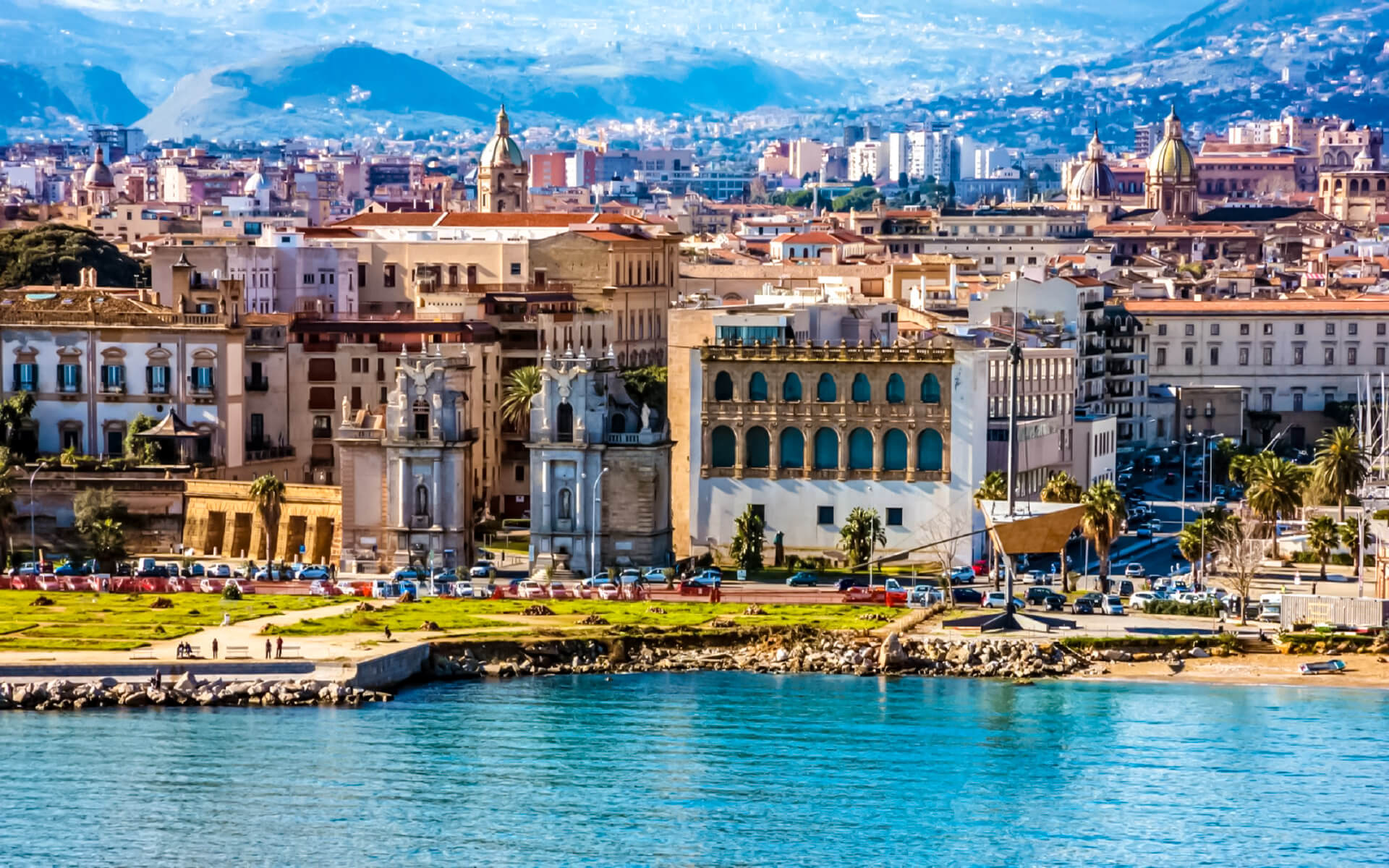 Palermo is a Southern Italian city that serves as the capital of both the autonomous province of Sicily and the Metropolitan City of Palermo. The city is known for its history, culture, architecture, and cuisine, and has played a major role for most of its history; it is over 2,700 years old. Palermo is situated in the northwest corner of the island of Sicily, directly on the Tyrrhenian Sea’s Gulf of Palermo.

The Phoenicians built the city as Ziz (‘flower’) around 734 BC. Palermo then became a territory of Carthage before being a part of the Roman Republic, the Roman Empire, and, finally, the Byzantine Empire for almost a thousand years. The Greeks called the city Panormus, which means “full port.” When the city originally became a capital, it was under Arab administration from 831 until 1072 under the Emirate of Sicily. The Arabs changed the Greek name to Balarm, which is the origin of Palermo’s current name. Following the Norman reconquest, Palermo became the capital of a new country, the Kingdom of Sicily, as well as the capital of the Holy Roman Empire under Frederick II, Holy Roman Emperor, and Conrad IV of Germany, King of the Romans (from 1130 to 1816). Sicily would eventually be united with the Kingdom of Naples to establish the Kingdom of the Two Sicilies, which would last until the Italian unification in 1860.

Eurostat estimates the population of Palermo’s urban area to be 855,285, but its metropolitan region is the seventh most populous in Italy, with around 1.2 million inhabitants. The city has a population of roughly 676,000 people in the core region. Palermitani or, more poetically, panormiti are the locals. The Italian language, Sicilian language, and Palermitano dialect are spoken by its residents.

Palermo is the cultural, economic, and tourism center of Sicily. It is a city steeped in history, culture, art, music, and cuisine. Numerous visitors visit the city because of its pleasant Mediterranean climate, famous cuisine and restaurants, Romanesque, Gothic, and Baroque churches, palaces, and architecture, as well as its nightlife and music. Palermo is the principal industrial and economic hub of Sicily, with major industries like as tourism, services, trade, and agriculture. Palermo now features an international airport as well as a substantial subterranean economy. In reality, Palermo was one of the major cities in the Mediterranean for cultural, artistic, and commercial reasons, and it is today one of the top tourist attractions in both Italy and Europe. It is the primary location for the UNESCO World Heritage Site of Arab-Norman Palermo, as well as the Cathedral Churches of Cefalù and Monreale. The city is also undergoing thorough reconstruction in order to become one of the key cities in the Euro-Mediterranean region.

In Palermitano culture, Roman Catholicism is very significant. Palermo’s patron saint is Santa Rosalia, whose feast day is observed on July 15. Every year, a large number of people visit the region, which is well known for its vibrant fruit, vegetable, and seafood markets in the center of Palermo, known as Vucciria, Ballar, and Capo.

Sicily’s capital, founded by Phoenicians under the name “Ziz” (= Flower, but the meaning is still unknown), later renamed by Greeks “Panormos” which means “all port,” it reached its golden age during Arab dominance (IX-XI centuries A.C.) when it became one of the most prosperous cities in the Mediterranean and Europe, known as “city of delights” for its marvelous and lavish gardens, as well as magnificent mosques and palaces

After the Normans conquered Sicily (1060-1080 A.C.), most of the palaces and mosques were destroyed, but the new rulers took advantage of the cosmopolitan environment of Palermo and the artists, architects, and masters from various cultural backgrounds, giving birth to a unique architectural style, the so-called “Arab-Norman Style of Sicily,” which is an original mixture of arabesque decorations, Romanesque architecture, and Byzantine mosaics. Palermo started its degeneration under the influence of many dominions (French, Aragonians, Spanish, and Borbons from Naples) after being home to one of the most renowned Emperors of the Middle Ages, Frederik II of Swabi, dubbed “Stupor Mundi” by contemporaries. Palermo was one of the leading revolutionary cities in Italy during the so-called “Italian Risorgimento” in the mid-nineteenth century, strongly contributing to the success of the “Mille” (literally “one thousand”) patriots’ expedition led by the famous Italian national hero Giuseppe Garibaldi, which ended with the reunification of Italy under the Savoy dynasty from Turin (1860).

Palermo is now dealing with a number of issues impeding its economic growth, mostly due to the existence of the very strong criminal organization known globally as the “Mafia” or “Cosa Nostra.” The local government institutions, port, shipbuilding industry, and mechanical industry support the city’s economy. It is also the home of several significant Sicilian winemaking firms (such as Tasca d’Almerita, Duca di Salaparuta, Corvo, Planeta, and others) whose global fame is expanding.

Palermo has a Mediterranean climate with hot summers (Köppen climatic classification: Csa). Summers are hot and dry, while winters are chilly and damp. Temperatures are typically pleasant in the fall and spring. Palermo has an average annual air temperature of 18.5 °C (65.3 °F), making it one of Europe’s hottest cities (thanks mostly to its mild evenings). It gets around 2,530 hours of sunlight each year. Snow is uncommon, although it does occur on occasion when there is a cold front, since the Apennines are too far away to shelter the island from cold winds coming from the Balkans, and the mountains around Palermo facilitate the creation of snow accumulation, particularly at night. There have been eleven instances of significant snowfall between the 1940s and the 2000s. When the lowest temperature dropped to 0 °C (32 °F) in 1949 and 1956, the city was buried by several cm of snow. Snowfall fell in 1999, 2009, and 2015. The average annual sea temperature is more than 19 °C (66 °F), ranging from 14 °C (57 °F) in February to 26 °C (79 °F) in August. Between May and November, the average sea temperature surpasses 18 °C (64 °F), while between June and October, the average sea temperature reaches 21 °C (70 °F).

Palermo is located in a basin created by the rivers Papireto, Kemonia, and Oreto. The Arabs termed the basin the Conca d’Oro (the Golden Basin) in the ninth century. The city is surrounded by a mountain range that has the same name as the city. The Tyrrhenian Sea is seen from these mountains. Palermo has a natural harbor and beautiful views of the Mediterranean, particularly from Monte Pellegrino.

Palermo is surrounded by calcar mountains that create a cirque surrounding the city. The mountains themselves separate several of the city’s districts. Because of the mountains, it was historically difficult to access the interior of Sicily from the city. La Pizzuta is the range’s highest peak, standing at about 1,333 m (4,373 ft.). However, the most significant peak historically is Monte Pellegrino, which is physically isolated from the rest of the range by a plain. The peak is located directly in front of the Tyrrhenian Sea. In his article “Italian Journey,” Johann Wolfgang von Goethe characterized Monte Pellegrino’s cliff as “the most magnificent point in the world” in the nineteenth century.

Both the Papireto and Kemonia rivers are now buried under structures. The shape of the previous watercourses, however, may still be recognized today since the streets constructed on them follow their contours. Today, the only undrained stream is the Oreto River, which separates the city’s center from the western uptown and industrial areas. However, there were several seasonal torrents in the basins that helped produce marshy plains that were recovered through time; a notable example can be seen in the town of Mondello.

Palermo, as Sicily’s administrative capital, is a hub for most of the region’s banking, tourism, and business. Palermo now boasts an international airport, and the city’s economic boom has resulted in the establishment of several new firms throughout the years. The economy is mostly based on tourism and services, although it also includes trade, shipbuilding, and agriculture. However, the city still has a high degree of unemployment, high levels of corruption, and a huge black market empire (Palermo being the home of the Sicilian Mafia). Despite the fact that the city still suffers from widespread corruption, inefficient bureaucracy, and organized crime, crime in Palermo has decreased dramatically, unemployment has decreased, and many new, profitable opportunities for growth (particularly in tourism) have been introduced, making the city safer and better to live in.

Cancún is a city in southeastern Mexico, on the Yucatán Peninsula’s northeast coast in the Mexican state of Quintana Roo. It is a well-known...
Read more

Iceland’s capital and biggest city is Reykjavik. It is the world’s northernmost capital of a sovereign state and a famous tourist attraction, with a...
Read more

Hamilton is the capital and most populated city in the Waikato region on New Zealand’s North Island. The city has a land area of around...
Read more

Rwanda, formally the Republic of Rwanda, is a sovereign state in central and east Africa and one of the continent’s smallest republics. Rwanda is...
Read more
Travel tips