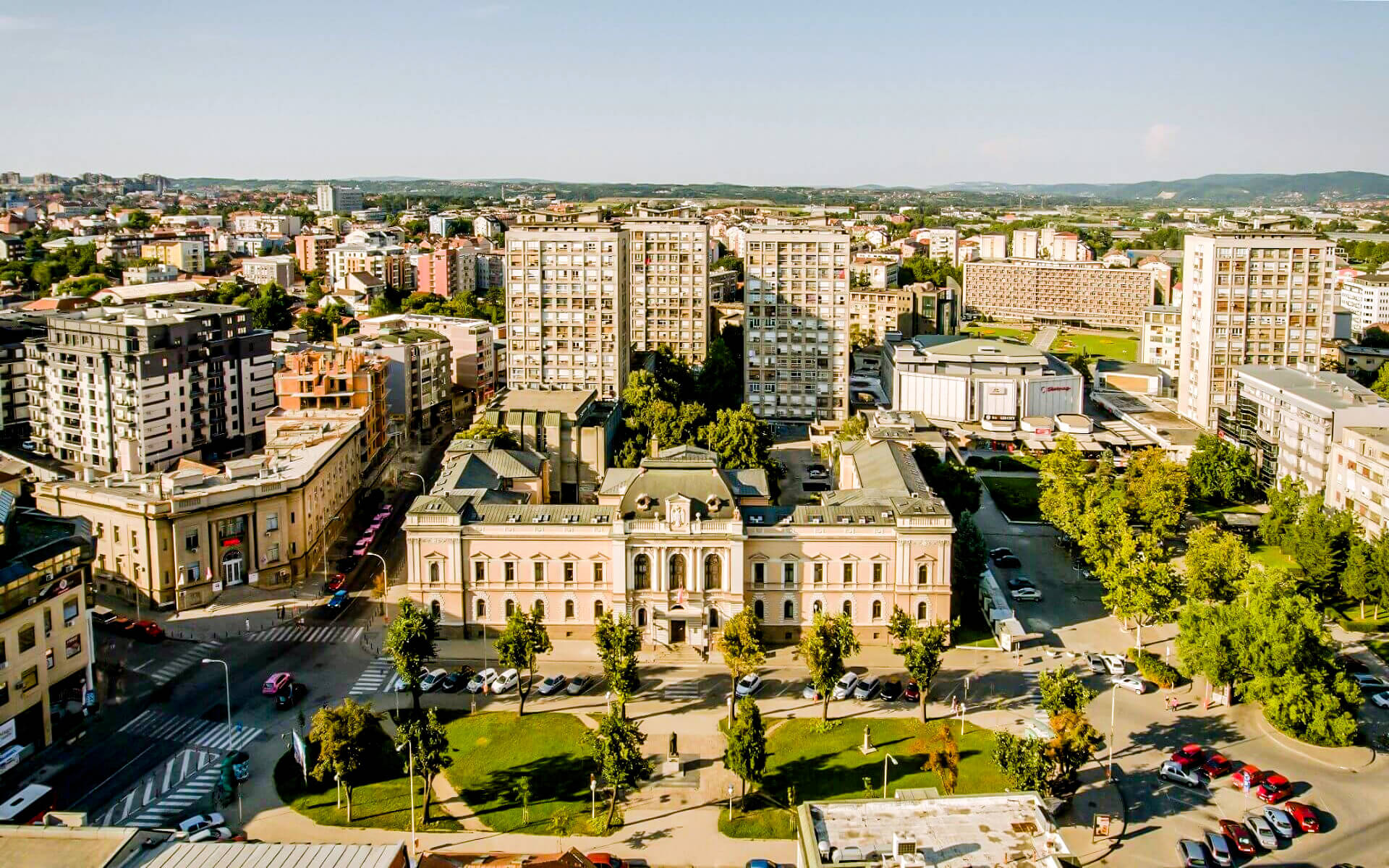 Kragujevac is Serbia’s fourth biggest city and the administrative center of the Šumadija District. It is located on the Lepenica River’s banks. The city has a population of 179,417 people, according to the official census statistics from 2011.

Kragujevac was the first capital of modern Serbia (1818–39), and it was here that the Balkans’ first constitution was proclaimed in 1835. Later, in 1838, the newly independent Serbia established its first full-fledged university, which was preceded by the establishment of the first grammar school, printworks (both in 1833), professional National theatre (1835), and Military academy (1837). The city was the location of a Nazi genocide that resulted in the deaths of thousands of Serbs. Kragujevac is recognized nowadays for its guns and ammunition (Zastava Arms) and vehicle sector (Fiat Automobili Srbija).

Kragujevac’s architecture is a blend of two distinct styles: traditional Turkish (now almost entirely gone) and 19th century Vienna Secession style. Contemporary concepts may also be seen throughout the city, initially in the form of post-war concrete (often flats built to shelter people left homeless after World War II), and then in the form of modern glass buildings representing the ambitious commercial elements of modern architects.

The Upper (Great) Park is Kragujevac’s largest park. It was founded in 1898. It has more than 10 hectares (25 acres) of greenery, and a thick canopy of century-old trees, refurbished paths, and seats are ideal for rest, stroll, and relaxation. There are basketball, football, volleyball, and tennis courts, as well as indoor and outdoor swimming pools, in the park and its close area. Lower (Small) Park is situated in the city center, inside the Milos Wreath complex. A memorial to the Fallen People of Šumadija stands at its middle. Svetozar Andrejevic built the Eco Park “Ilina Voda” in 1900. It is 7 hectares (17 acres) in size and has seats, swings, seesaws, as well as football and basketball grounds. There is a fountain with a little waterfall, as well as five smaller lakes linked by a short creek. There is also a small zoo with around 100 largely domestic animals and a garden with different kinds of plants typical to Šumadija. The park’s attraction is the biggest Easter egg sculpture (3 metres (10 ft) high) in Europe and the second largest in the world; it was built from scrap metal in 2004. Brewer Park is situated in the city center on Brewer Hill, the site of Kragujevac’s first brewery.

Kragujevac’s climate is temperate continental, with moderately chilly winters and hot summers. January is the coldest month, while July is the hottest. The months with the greatest rain are May and June, whereas the months with the least rain are January, February, and March. Winds blow from the southwest and northwest most of the time, but from the southeast most of the time in January, February, and March. The average amount of snow days per year is 30.

Kragujevac is located at an elevation of 180 meters (591 feet) above sea level. Kragujevac is located at 44°00’40 of northern latitude and 20°54’40 of eastern longitude. It is situated in the valley of the Lepenica River. The city has an area of 835 square kilometers (322 square miles) and is bordered by the mountains Rudnik, Crni Vrh, and Gledić. Kragujevac is the administrative seat of Šumadija, a hilly-mountainous area.

For more than two centuries, Kragujevac has been an important industrial and commerce town in Serbia. The city is well-known for its car and guns industries. Fiat purchased the former state-owned Zastava Automobiles firm in 2008, promising to spend 700 million euros in the company currently known as Fiat Automobiles Serbia. Kragujevac started producing weapons in 1853 and has since evolved to become Serbia’s principal producer of guns via the Zastava Arms business. Zastava Arms now sells more than 95 percent of its goods to over forty nations worldwide. Zastava Arms joined the Serbian Defense Industry in 2003 as a result of decisions made by the Ministry of Defense of the Serbian Government. Yugoimport SDPR, the Army and Police of Serbia, Century Arms, and the International Golden Group are Zastava Arms’ most significant partners.

Around 65 percent of the administrative area’s 179,417 residents are of working age. In September 2012, the total number of workers was 41,457. The majority of working-age people have a secondary education (51.34 percent) or a primary education (21,22 percent), with just 14 percent having a college or university degree. Water supply systems cover around 93 percent of the entire city area, sewage systems cover 78 percent, natural gas supply networks cover 72 percent, and mobile phone networks cover 92 percent.