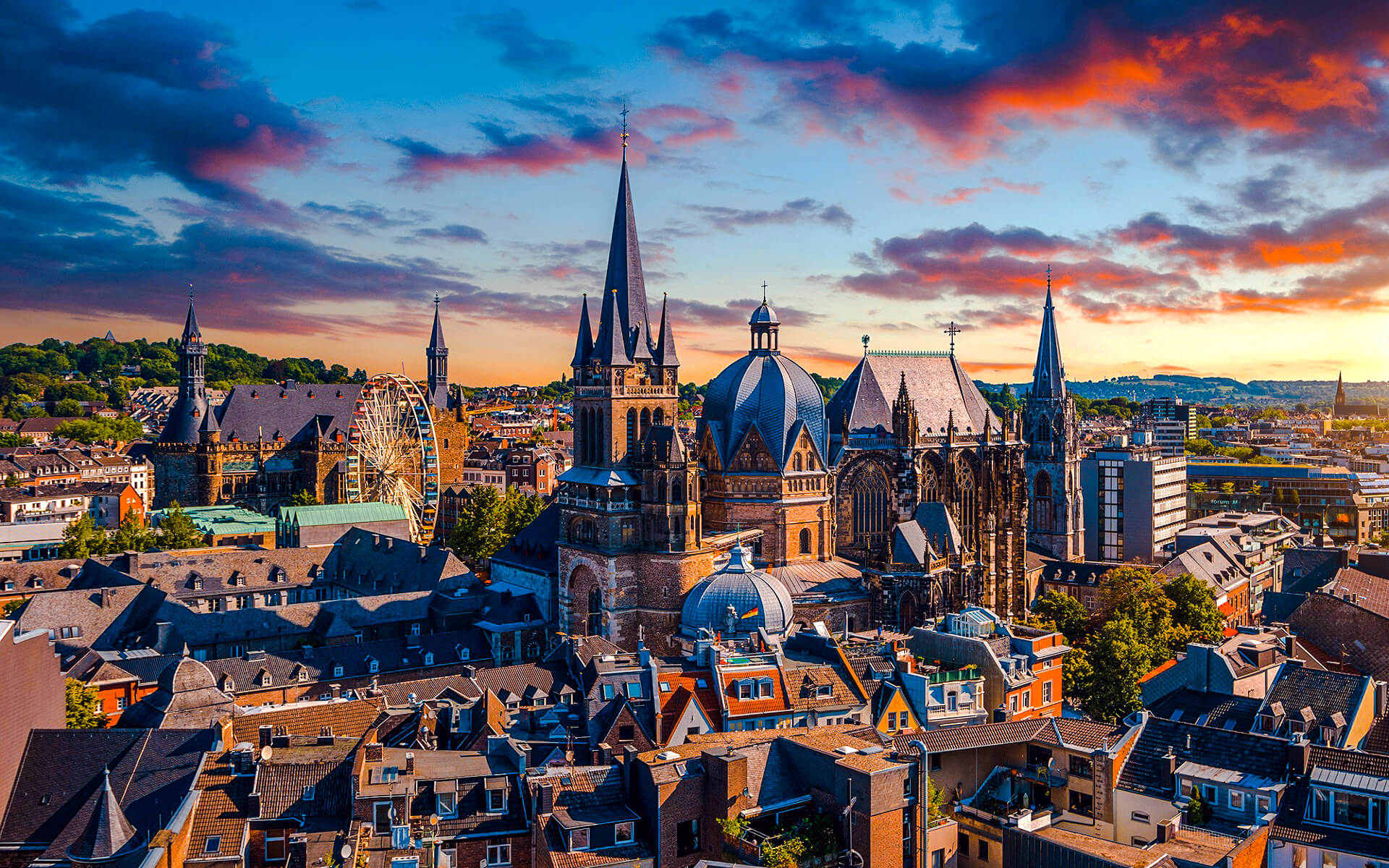 Aachen is a historically significant city, spa, and academic center in North Rhine-Westphalia, located in the “three lands corner” where Germany, Belgium, and the Netherlands meet. The city, known as Aix-la-Chapelle in French and Aken in Dutch, was a favorite residence of Charlemagne, the first Holy Roman Emperor who founded the empire in the late 8th and early 9th centuries and built the city’s impressive cathedral, where he is now buried alongside a succession of later German rulers, many of whom were also crowned in the city.

Aside from its medieval importance and a wealth of surviving relics, Aachen is also famed for its springs, which have drawn tourists since Ancient Roman times and continue to do so today, with a variety of ancient baths and hotels scattered around the city. The technical university, which has made Aachen a centre for new technology and has a sizable student population, also contributes to the city’s prosperity and reputation (over 40 000 of the total 250 000 inhabitants). Aachen is today a multi-cultural and popular tourist destination as a result of all of this.

Historically, this spa town was a renowned city, where German Kings were crowned, and a notably favorite home of Charlemagne, who is still buried in the spectacular cathedral he erected. The city is densely filled with historic sites that harken back to ancient times, such as medieval buildings, city gates, and gorgeous fountains.

As Germany’s westernmost city (and adjacent to the Low Countries), Aachen and its surrounding region have a moderate climate, with humid weather, mild winters, and pleasant summers. Rainfall in Aachen (on average 805 mm/year) is greater than in Bonn (with 669 mm/year) due to its position north of the Eifel and the High Fens, as well as the prevailing westerly weather patterns. Another aspect in Aachen’s local weather conditions is the occurrence of Foehn winds on southerly air currents, which is caused by the city’s geographic position on the northern border of the Eifel.

The city suffers from inversion-related haze since it is surrounded by hills. Some portions of the city have developed urban heat islands as a consequence of inadequate heat exchange caused by both natural topography and human activities. The city’s many cold air corridors, which are expected to stay as free of new building as possible, thereby play a significant part in Aachen’s urban climate.

Aachen lies in the heart of the Meuse–Rhine Euroregion, near to the borders of Germany, the Netherlands, and Belgium. The Dutch city of Heerlen is close, as is Eupen, the seat of Belgium’s German-speaking Community, both of which are around 20 kilometers (12.4 miles) from Aachen’s city center. Aachen is located at the head of the open valley of the River Wurm (which currently runs through the city in canalized form), part of the wider basin of the River Meuse, and about 30 kilometers (19 miles) north of the High Fens, which constitute the northern boundary of the Rhenish Massif’s Eifel uplands.

The university’s IT technology department has resulted in a number of spin-offs.

Aachen serves as the administrative hub for the coal-mining businesses in the surrounding areas to the northeast.

Electrical items, textiles, foodstuffs (chocolate and sweets), glass, equipment, rubber products, furniture, and metal products are all made in Aachen. Chemicals, plastics, cosmetics, and needles and pins are also manufactured in and around Aachen. Though formerly a prominent factor in the Aachen economy, glassware and textile manufacture now account for barely 10% of total manufacturing employment in the city.