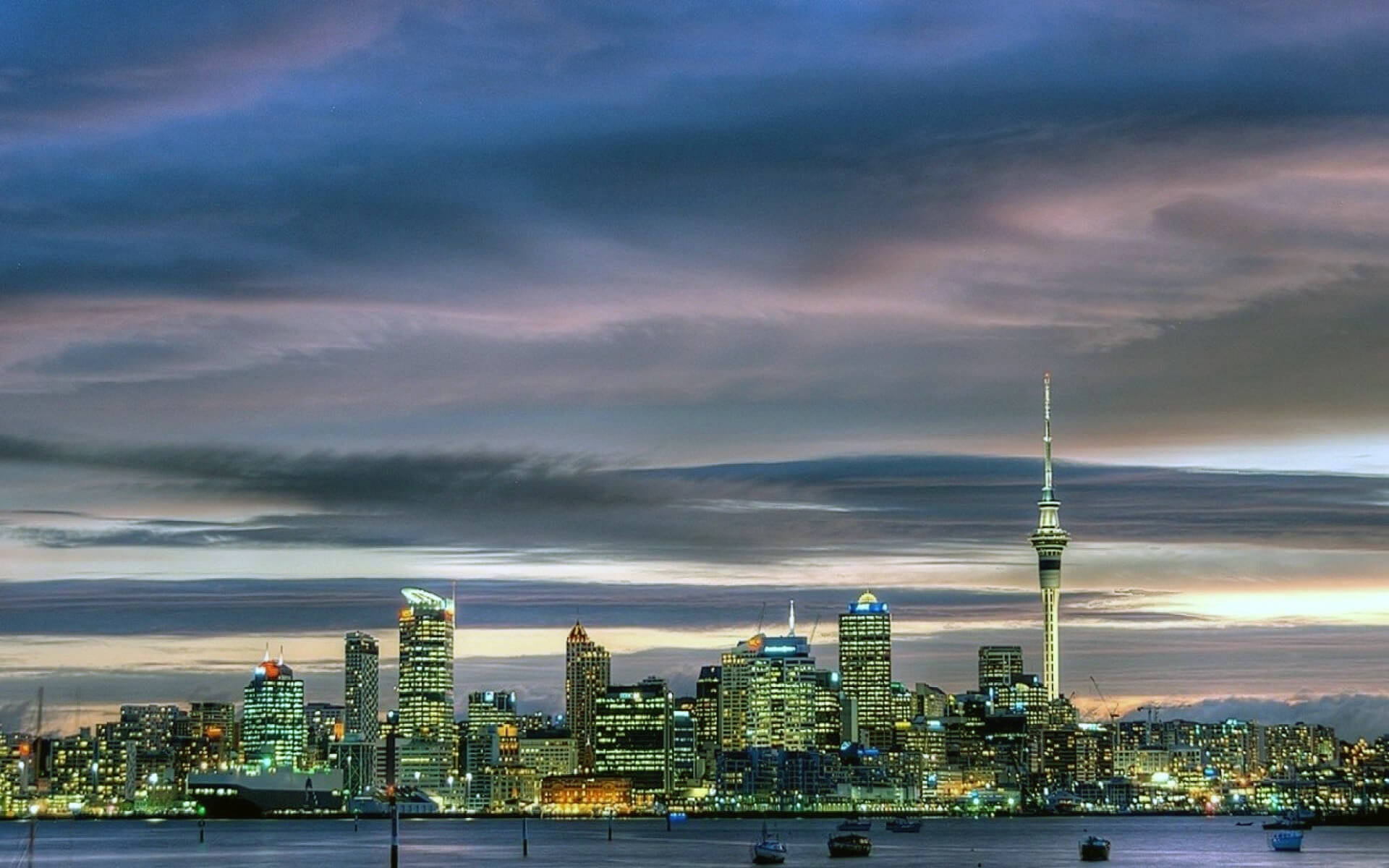 Auckland, New Zealand’s biggest and most populated city, is located on the country’s North Island. Auckland has a population of 1,454,300 people, accounting for 32% of New Zealand’s total population. It is part of the larger Auckland Region, which encompasses the rural regions and towns north and south of the metropolitan area, as well as the Hauraki Gulf islands, with a total population of 1,570,500 people controlled by the Auckland Council. In addition, Auckland boasts the world’s biggest Polynesian population. Tmaki Makaurau is Auckland’s Mori name, while Ākarana is the Mori phonetic rendition of Auckland.

The Auckland urban area (as defined by Statistics New Zealand) extends north to Waiwera, northwest to Kumeu, and south to Runciman. It is not continuous; the area from Waiwera to Whangaparoa Peninsula is distinct from Long Bay, its closest neighboring neighborhood. The city of Auckland is located between the Pacific Ocean’s Hauraki Gulf to the east, the low Hunua Ranges to the south-east, Manukau Harbour to the south-west, and the Waitakere Ranges and lesser ranges to the west and north-west. The core business district is located on a small isthmus between Manukau Harbour on the Tasman Sea and Waitemata Harbour on the Pacific Ocean. It is one of the few towns in the world with two harbours on two distinct bodies of water.

The 2014 Mercer Quality of Living Survey placed Auckland third in the world, while the 2015 Economist Intelligence Unit’s World’s most liveable cities ranking put Auckland ninth. Loughborough University categorized Auckland as a Beta World City in the World Cities Study Group’s inventory in 2010. It is the most populous Oceanian city outside of Australia.

Auckland is New Zealand’s biggest city and the country’s principal entry point for tourists. It is a dynamic multicultural city centered on two large natural harbors, and it is recognized as one of the world’s most liveable cities. It is located in the warm northern portion of New Zealand’s North Country, on a tiny isthmus that connects the Northland peninsula to the rest of the island.

The popularity of sailing in the area has earned Auckland the moniker “City of Sails.” Auckland has 135,000 registered yachts and launches, and around 60,500 of the country’s 149,900 registered yachtsmen are from Auckland, with almost one in every three Auckland homes having a boat. The Viaduct Basin, located on the CBD’s western outskirts, staged two America’s Cup races (2000 Cup and 2003 Cup). The Waitemata Harbour is home to numerous renowned yacht clubs and marinas, including the Royal New Zealand Yacht Squadron and the biggest marina in the Southern Hemisphere, Westhaven Marina. Mission Bay and Kohimarama on the south side of the Waitemata Harbour, and Stanley Bay on the north side, are famous swimming spots. There are great swimming beaches on the eastern North Shore, where the Rangitoto Channel separates the inner Hauraki Gulf islands from the mainland, including Cheltenham and Narrow Neck in Devonport, Takapuna, Milford, and the other beaches farther north in the East Coast Bays region. Popular surf places on the west coast include Piha, Muriwai, and Bethells Beach. To the north of the major metropolitan area, the Whangaparaoa Peninsula, Orewa, Omaha, and Pakiri are also popular. Many Auckland beaches are patrolled by surf lifesaving clubs, such as Piha Surf Life Saving Club, which also serves as the headquarters of Piha Rescue. The Surf Life Saving Northern Region includes all surf lifesaving clubs.

Queen Street, Britomart, Ponsonby Road, Karangahape Road, Newmarket, and Parnell are prominent shopping districts, while the Otara and Avondale fleamarkets provide an alternate shopping experience on weekends. The majority of retail malls are situated in the middle and outer suburbs, with the biggest being Sylvia Park and Westfield Albany.

The Auckland Art Gallery, Auckland War Memorial Museum, New Zealand Maritime Museum, National Museum of the Royal New Zealand Navy, and the Museum of Transport and Technology are also important institutions. The Auckland Art Gallery is regarded as New Zealand’s visual arts home, with a collection of nearly 15,000 artworks by famous New Zealand and Pacific Island artists, as well as worldwide painting, sculpture, and print collections dating from 1376 to the present day. Julian and Josie Robertson, New York art collectors and benefactors, offered the Gallery a donation of fifteen pieces of art in 2009, including well-known paintings by Paul Cézanne, Pablo Picasso, Henri Matisse, Paul Gauguin, and Piet Mondrian. This is the biggest donation ever given to an Australasian art institution.

The climate in Auckland is moderate, with distinct seasons. Summers are often hot and humid, while winters are pleasant and moist. Auckland may receive a lot of rain all year, with more in the winter than the summer, although it can also have dry spells. Temperatures at night in the winter never drop far below freezing. An average of nine ground frosts occur each year.

Auckland is located on the Auckland volcanic field, which has had over 90 volcanic eruptions from 50 volcanoes during the previous 90,000 years. It is the only city in the world constructed atop an active basaltic volcanic area. The field is expected to be active for another million years. Cones, lakes, lagoons, islands, and depressions are among the surface features, and many have created significant lava flows. Some of the cones and flows have been chiseled away in part or whole. Individual volcanoes are all deemed extinct, although the volcanic region as a whole is just inactive. The most recent eruptions have tended to occur in the field’s northwestern quadrant. At least 14 enormous lava tube caverns extend from the volcanoes down to the sea in Auckland. Some of them are many kilometers long. Stonefields is a new community developed in an excavated lava flow north of Maungarei / Mount Wellington that was originally utilized as a quarry by Winstones.

The volcanoes of Auckland are exclusively fed by basaltic magma, as opposed to the explosive subduction-driven volcanism of the central North Island, such as Mount Ruapehu and Lake Taupo, which are of tectonic origin.

Rangitoto Island, the most recent and by far the biggest volcano, arose within the past 1000 years, and its eruptions devastated the Mori communities on neighboring Motutapu Island 700 years ago. Rangitoto is Auckland’s most famous natural landmark due to its size, symmetry, location guarding the entrance to Waitemata Harbour, and visibility from many areas of the Auckland region. Because of the rich acidic soil and the sort of vegetation that grows out of the rocky soil, the island has few birds and insects.

Auckland is built on and around an isthmus that stretches between Mangere Inlet and the Tamaki River and is less than two kilometers wide at its narrowest point. The Auckland metropolitan area is surrounded by two harbours: Waitemata Harbour to the north, which opens east to the Hauraki Gulf, and Manukau Harbour to the south, which opens west to the Tasman Sea. Auckland has a total shoreline length of 3,702 kilometers (2,300 miles).

Several Hauraki Gulf islands are managed as part of Auckland, even though they are not part of the Auckland metropolitan region. Parts of Waiheke Island essentially operate as Auckland neighborhoods, although several smaller islands around Auckland are zoned’recreational open space’ or are nature reserves.

Auckland also has a total length of roughly 21,000 kilometers (13,000 km) of rivers and streams, with approximately 8% of them being in metropolitan areas.

Because Auckland is the nation’s economic hub, most large multinational firms maintain an office there. The most costly office space in the Auckland CBD is around lower Queen Street and the Viaduct Basin, where numerous financial and commercial services are concentrated, accounting for a substantial portion of the CBD economy. South Auckland’s industrial zones house a significant amount of the technical and trades workers.

Greater Auckland’s major commercial and industrial districts are in the southeast of Auckland City and the western sections of Manukau City, particularly around the Manukau Harbour and the Tamaki River estuary.

In 2003, the Auckland region’s sub-national GDP was projected to be US$47.6 billion, accounting for 36% of New Zealand’s national GDP and 15% more than the whole South Island.

Auckland’s reputation as the country’s major commercial city is reflected in the region’s high median personal income (per working person, per year), which was NZ$44,304 (about. US$33,000) in 2005, with employment in the Auckland CBD often paying more. The median personal income (per year for all people over the age of 15) was NZ$22,300 in 2001, behind only North Shore City (also part of the Greater Auckland region) and Wellington. While office employees continue to make up a major proportion of Auckland’s commuters, big office complexes in other areas of the city, such as Takapuna or Albany on the North Shore, are gradually becoming more popular, lessening focus on the Auckland CBD.

In the CBD, there are several internet cafés with fees ranging from $1 per half hour to $5 per hour. The public library provides free internet access (limited 100MB per IP address per day). The Skycity food courts also include free Wi-Fi. There are 40 Wi-Fi hotspots in Auckland, including Esquires café (within Skycity Queen St, Middle Queen St, Lower Queen St, Nelson St), Starbucks (Victoria St, K’ Rd, Lower Queen St), and other cafes.