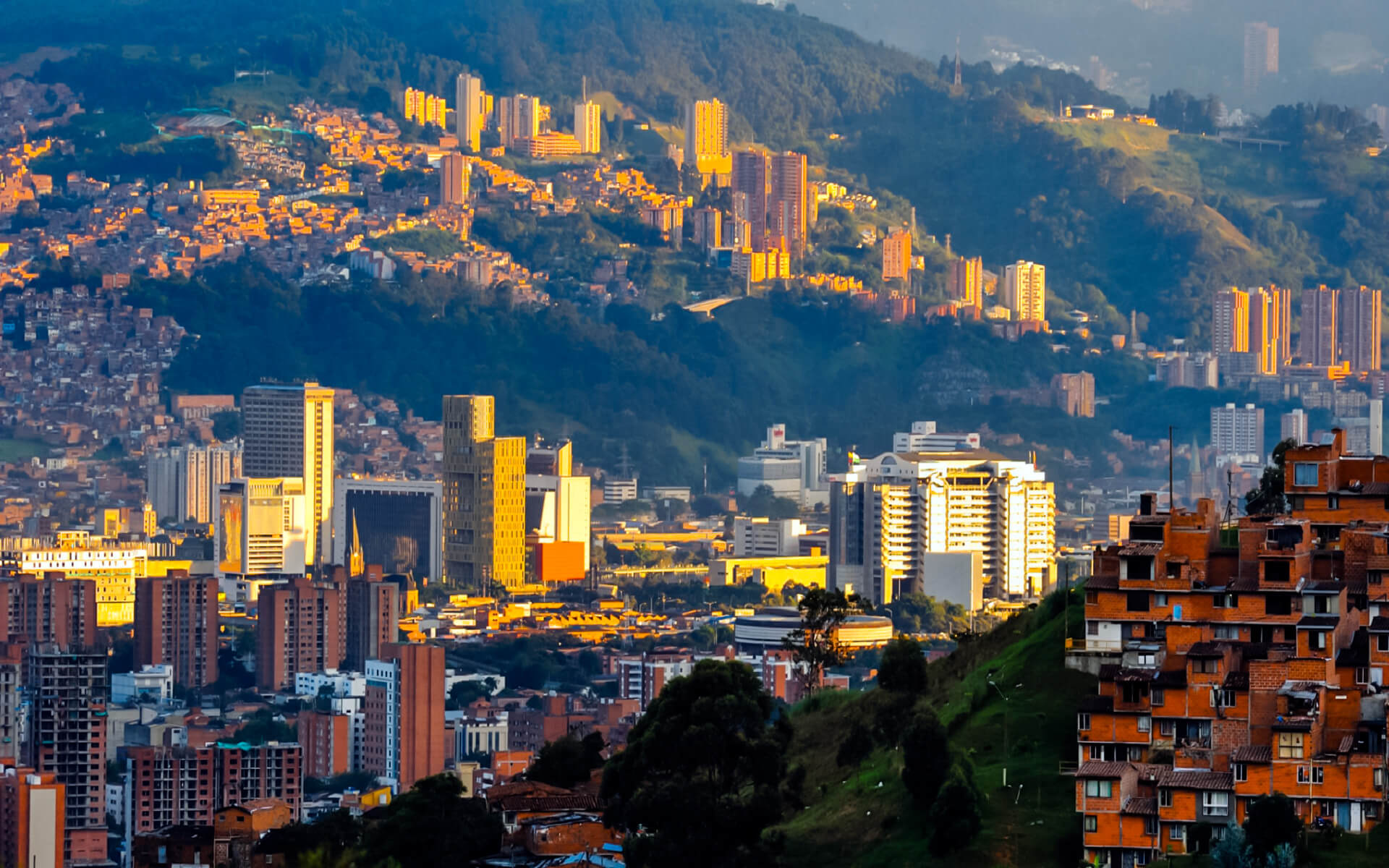 Medellín, formally the Municipality of Medellín, is Colombia’s second-largest city and the seat of the Antioquia department. It is situated in the Aburrá Valley, a major section of South America’s Andes Mountains. As of 2014, the city has a population of 2.44 million people, according to the National Administrative Department of Statistics. Medellín’s metropolitan region, which includes nine additional cities, is Colombia’s second-largest urban agglomeration in terms of population and economy, with about 3.7 million inhabitants.

In 1616, the Spaniard Francisco Herrera Campuzano established the “Saint Lawrence of Aburrá” (San Lorenzo de Aburrá) indigenous town (“poblado”) in the present-day El Poblado community. On November 2, 1675, Queen Consort Maria of Austria established the “Town of Our Lady of Candelaria of Medellín” (Villa de Nuestra Seora de la Candelaria de Medelln) in the Aná district, which now corresponds to the city’s heart (east-central zone), and initially refers to the territory as “Medellín.” The National Congress of the embryonic Republic of Gran Colombia, which included present-day Colombia, Venezuela, Ecuador, and Panama, designated the city as the seat of the Department of Antioquia in 1826. Medellín became the capital of the Federal State of Antioquia after Colombia’s independence from Spain until 1888, with the promulgation of the Colombian Constitution of 1886. Medellín was a thriving economic city in the nineteenth century, initially selling gold and subsequently manufacturing and exporting coffee.

The city was formerly considered as the most dangerous in the world because to its association with the now-defunct Medellín Cartel. However, its murder rate has dropped by 95% and severe poverty has dropped by 66%, owing in part to a series of visionary mayors who drew out plans to merge the city’s poorest and most dangerous hillside areas into the city center in the valley below. Medellín is currently deemed safer than the top 50 US cities of Baltimore, St. Louis, Detroit, and New Orleans, according to the CCSPJP.

With the building of the Medellín Metro commuter train, liberalized development laws, increased security, and improved education, the city recovered economic vitality around the turn of the century. Overseas Development Institute researchers recognized the city as a forerunner of a post-Washington consensus “local growth state” model of economic development. The city is marketed globally as a tourism attraction and is deemed “adequate” by the GaWC to be a global metropolis.

The Medellín Metropolitan Area accounts for 67 percent of the GDP of the Department of Antioquia and 11 percent of Colombia’s economy. Medellín is significant in the area because of its universities, academies, business, industry, science, health services, flower-growing, festivals, and nightlife.

Medellín was named the world’s most inventive city in February 2013 by the Urban Land Institute, owing to recent improvements in politics, education, and social development. In the same year, Medellín was named the favorite corporate business destination in South America, and also received the Verónica Rudge Urbanism Award from Harvard University for the Urban Development Enterprise, owing largely to the city’s North-Western Integral Development Project. Colombia’s proposal to host UN-7th Habitat’s World Urban Forum in Medellín from April 5–11, 2014 was approved by the United Nations in September 2013.

According to Indra Sistemas’ most current report on the worldwide status of Smart Places, Medellín is one of the greatest cities to live in South America, sharing first position with Santiago de Chile, and ranking with Barcelona and Lisbon in Europe. Medellín was awarded the Lee Kuan Yew World City Prize in 2016. The goal of the award is to recognize and celebrate efforts to advance innovation in urban solutions and sustainable urban development.

Medellín is Colombia’s second-biggest city. It is the capital of the Antioquia department and has a population of about 2 million people. It is located in a valley that runs south to north and is just a one-hour flight from Bogotá.

Medellín is a sprawling metropolis developed from north to south in the Aburrá valley and flanked on all sides by spectacular mountain ranges. The richer classes reside in El Poblado, a well-protected hillside enclave, as well as the more conventional suburban suburbs of Laureles and Envigado. This is a long way from the city’s core, where there is a lot of activity. The bustling markets and vibrant street life contribute significantly to the city’s allure. The city is home to a half-dozen institutions, which contribute to a thriving cultural and nightlife scene powered by thousands of young people from throughout the nation. Medellín is also the country’s biggest industrial city, with manufacturers producing everything from designer apparel to Toyota SUVs. The city’s northern hills are teeming with rural refugees fleeing the continuing civil conflict, and their creativity in forging a livelihood is inspiring. In order to earn a livelihood, people sell anything from crayons to guinea pigs to garden soil in bars.

As a relatively young city, the architecture has a noticeably modernist look, which corresponds to its citizens’ progressiveness. Medellín also boasts Colombia’s first (and only) Metro system. For foreign visitors, Medellín is likely best known for the Botero Museum, named after possibly the most renowned contemporary artist living today. It is also noted for its ideal environment, earning it the moniker “city of everlasting spring.”

Medellín is bordered by eight smaller towns that make up the Area Metropolitana, which has a population of over 3.5 million people. Bello, Itagu, Sabaneta, La Estrella, Caldas, Copacabana, Girardota, and Barbosa are among the other towns. Even though it is adjacent to several of the towns indicated above, Envigado does not belong to this administrative organization. Medellín is a genuine conglomeration of communities, and it is difficult to discern the boundaries between these municipalities. The valley of Rionegro, located east of Medellín, is bigger and higher in the mountains. This region is home to some of the city’s most prominent industries, recreational areas, and suburbs, as well as the International Airport.

Medellín’s weather is so pleasant that it earned the nickname “City of Eternal Spring.” The average daily temperature is 22 °C (71°F), with temperatures ranging from 15 to 30 °C (60o-85 °F). The humidity level is reasonable, in the 50-70 percent range. Because of its near to the equator, there is minimal seasonal change. Medellín keeps cold due to its high altitude and mild gloomy sky, with just a handful of hours of direct sunlight.

Because Medellín is situated in a tropical area, the lack of air conditioning in Medellín sometimes surprises foreign tourists. In downtown areas, air conditioning is employed. Fresh air comes from the mountains that encircle Medellín on all sides, providing the city with the ideal environment. The temperature at night is normally in the 10-15°C (50-60°F) range, depending on whether it is raining. Because of the ideal temperature, the majority of restaurants are open air, with no barriers.

Medellín has a total area of 382 km2 (147 sq mi). It is divided into 16 comunas (districts), 5 corregimientos (townships), and 271 barrios. Medellín’s metropolitan area is located inside the Aburrá valley at a height of 1,500 meters (approximately 4921 feet) and is divided by the Medellín River (also known as Porce), which flows northward. The towns of Bello, Copacabana, Girardota, and Barbosa are located to the north of the valley. Itagü,Envigado, Sabaneta, La Estrella, and Caldas are located to the valley’s south.

Medellín is a major business hub in Colombia. Its economy is headed by a large private-sector organization known as the Grupo Empresarial Antioqueo (Antioquian Enterprises Group). The organization was formerly known as the Sindicato Antioqueo (Antioquian Union), but after being misidentified as a labor union overseas, which inhibited its worldwide expansion for many years, a new official name was selected. It is represented by David Bojanini, CEO of Grupo Suramericana (a banking, asset management, and insurance conglomerate); Carlos Ignacio Gallego, CEO of Grupo Nutresa (food industry); José Alberto Velez, CEO of Cementos Argos (a multinational cement company); and Carlos Ral Yepes, CEO of Bancolombia. This conglomerate has a market valuation of around US $17 billion and employs over 80,000 Colombians.

This organization is also involved in other aspects of the city’s business and is a frequent trader on the Colombian stock market. Many national and global corporations have their headquarters in Medellín.