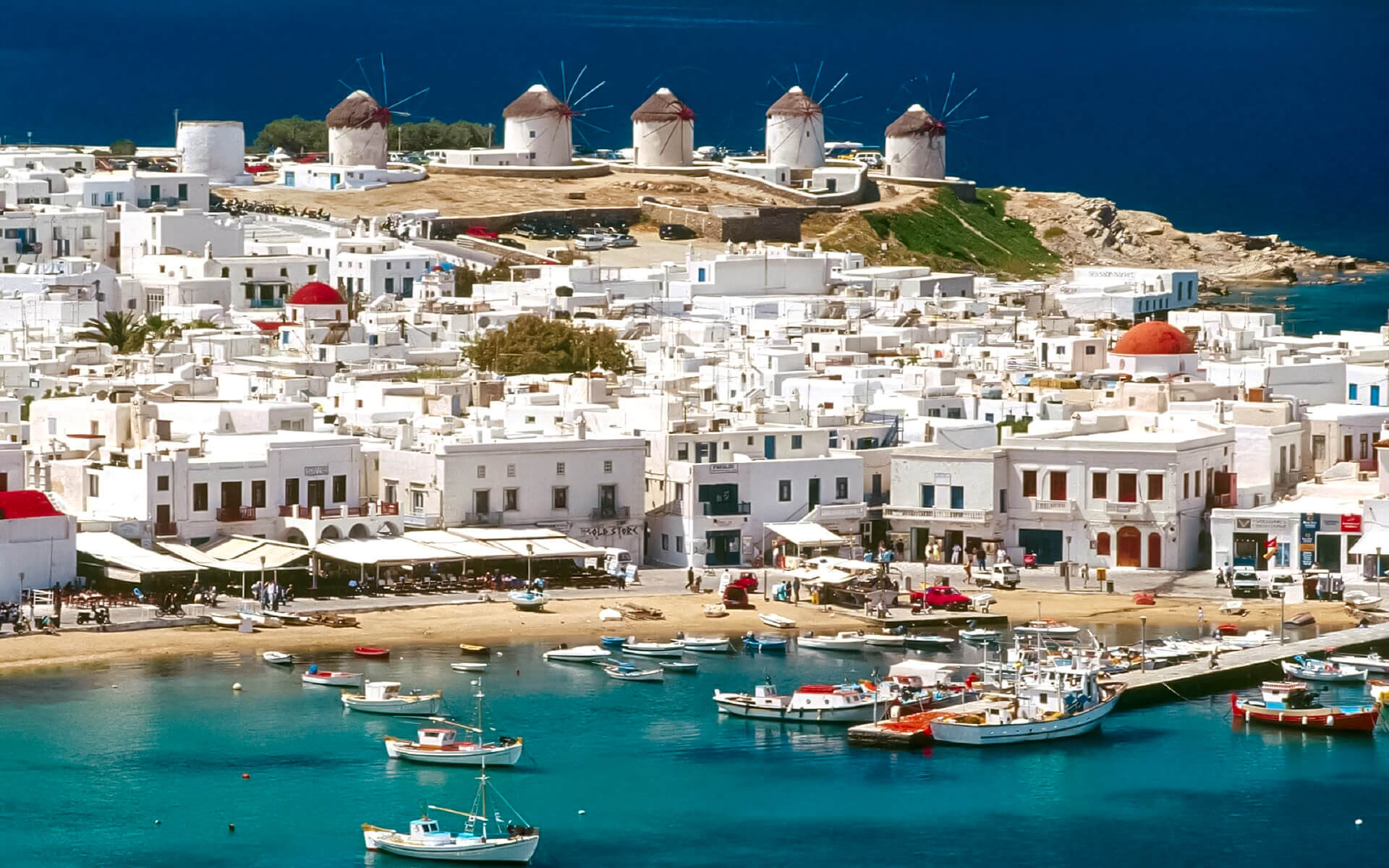 Mykonos (Greek: Μύκoνος) is a prominent tourist destination in the Cyclades group of Greek islands located in the Aegean Sea. Mykonos is situated to the south of Tinos, to the east of Syros, and to the north of Paros and Naxos.

There are 10,134 residents, the majority of them live in Mykonos, commonly known as Chora (i.e. the Town in Greek, a common denomination in Greece when the name of the island itself is the same as the name of the principal town).

Mykonos is well-known as a cosmopolitan destination among the Greek islands and is largely regarded as one of the world’s great vacation hotspots. It is one of the most popular Aegean islands. Visitors should be prepared for noisy dance clubs, English breakfasts, and pricey souvenirs. Mykonos and Santorini are both more pricey than other Greek islands.

In July and August, Mykonos is particularly popular with tourists. Mid-May through June (early season, when accommodations are significantly cheaper and it’s not too hot) or September through mid-October are the finest times to visit Mykonos (post season).

Mykonos is a gay-friendly island with a thriving gay nightlife, and it is one of the most popular LGBT vacation destinations in Europe. While many other Mediterranean locations have a sizable LGBT tourist population, Mykonos has managed to stay sophisticated and romantic rather than boisterous.

If you’re homosexual, obtain an up-to-date map of all the LGBT establishments. Super Paradise and Elia are the most popular gay beaches. These are not exclusively homosexual, but there are sections where gay men and women meet. The little beach between Elia and Agrari is the only homosexual beach worthy of the term.

Mykonos has a Mediterranean climate with hot, dry summers and pleasant winters. It seldom rains throughout the summer, as it does on the most of the Aegean islands, however rain showers may be anticipated between October and April.

From mid-May until mid-October, the weather is normally pleasant and bright enough to enjoy the beaches.

The island has an area of 85.5 square kilometers (33.0 square miles) with a maximum elevation of 341 meters (1,119 feet). It is located in the Aegean Sea, 150 kilometers (93 miles) east of Athens. There are no rivers on the island, however there are multiple seasonal streams, two of which have been turned into reservoirs.

The island is largely made of granite, and the topography is very rough, with numerous parts damaged by high winds. Until the late 1900s, the eastern side of Mykonos was mined for high-quality clay and baryte, a mineral used as a lubricant in oil drilling.

It generates 4,500 cubic metres (160,000 cu ft) of water per day by reverse osmosis of sea water to assist fulfill the demands of its residents and tourists.

The island has a population of roughly 12,500 people, the majority of whom reside in Chora, the main town.

As a Greek island, Mykonos’ economy is inextricably linked to the sea. However, with the growth of tourism, it now plays only a small role throughout the summer.

The most cost-effective approach to phone overseas is to use a pre-paid calling card and call from any land line (also from your hotel room). Many businesses and kiosks in Mykonos Town sell pre-paid calling cards. The calling card is nothing more than a phone number and a PIN code that you enter before dialing the regular phone number. If you wish to make an overseas call, request an international calling card. You may call for roughly 45 minutes for 1 euro, so get the cheapest card possible (which is about 3 euros). Calling someone for 30 minutes is less expensive than sending one email from an Internet café. Cards typically expire 90 days after the initial usage. This pre-paid calling card may also be used in public phone boxes, which are many in Mykonos Town, albeit there are many damaged phone boxes as well.