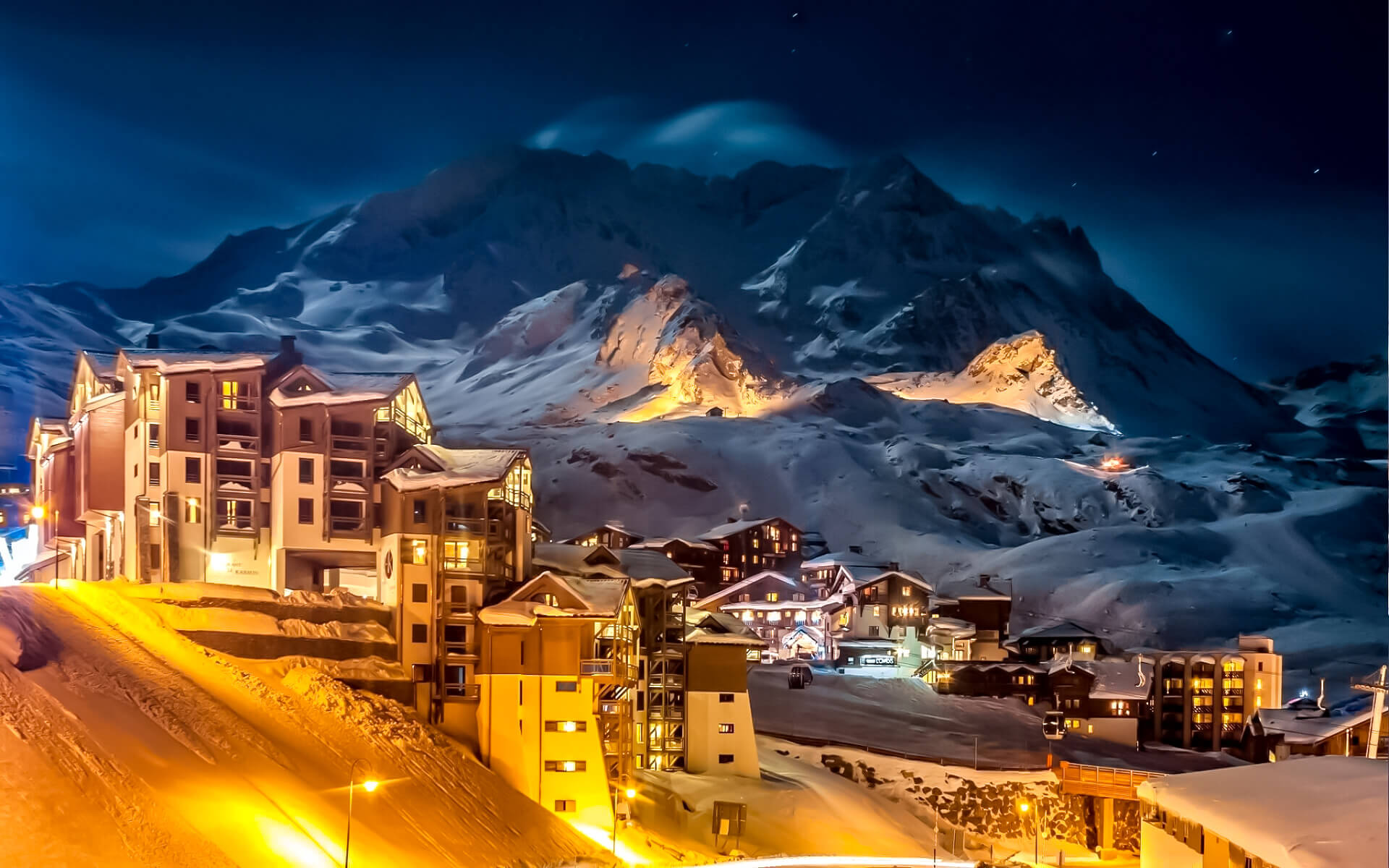 Val Thorens is a ski resort in the French department of Savoie. Val Thorens is Europe’s highest Alpine skiing resort, with the town itself being at 2300 meters above sea level. This also makes it one of Europe’s most snow-sure destinations, with the ski season lasting until early May. The resort is part of the 3 Vallées connected ski area, which has over 600 kilometers of piste and is the world’s biggest linked ski area.

Val Thorens, located at the top of the Belleville Valley, is Europe’s highest ski resort at 2300m, with lifts ascending to above 3000m in various locations. For skiers and boarders, this means that even in a bad season, there is frequently fantastic skiing here, and good snow helps everyone, whether they are beginners learning how to turn, intermediates who like crisp solid pistes, or specialists looking for well-preserved powder stashes.

The sheer scale of the skiing is particularly impressive. The Belleville valley alone has three linked ski resorts (Val Thorens, Les Menuires, and St Martin de Belleville), eight peaks over 3000m, over 70 ski lifts, and over 300 kilometers of pistes. It also encompasses more than one valley, illogically, since it includes the hills between Val Thorens and Orelle, which make up the enigmatic “Fourth Valley.”

But it is just the beginning of the skiing offered. The Col de la Chambre is two lifts away from the center of Val Thorens, from where you can ski all the way down to Meribel, 1400m below, but you’ll definitely want to stop since you’ll be travelling through some of the valley’s greatest skiing. And to go to Courchevel, you just need to take two more lifts.

Val Thorens is also a lovely spot to stay in general. It isn’t very attractive, but it is tiny, virtually traffic-free, and home to several good pubs, restaurants, and elegant new buildings. It’s also pleasantly sunny: although the hills are largely north-facing, the settlement itself is south-facing. It’s also quite handy for skiers. Almost all of the lodging is ski-in/ski-out.

The main issue is in bad weather; there are no trees to provide shade from the harsh glare, and a North-facing ridge above Val Thorens is not a pleasant place to be in a snowstorm. When a storm sweeps in, many of the lifts are just too high and exposed, forcing them to shut. However, if this occurs repeatedly throughout your stay, you will be very unlucky. A more usual sight is stepping off of a lift at roughly 3000m and gazing over the mountain summits, soaking in one of the most spectacular vistas in the Alps.

The Val Thorens skiing region has some of the greatest slopes in the world, with the challenging mogul fields of the Cime de Caron and La Masse farther down the valley, and unlimited off piste chances on the Chaviere or Peclet glaciers for expert skiers.

The practically limitless choice of red and blue pistes gives the intermediate skier with virtually limitless options during their Val Thorens skiing vacation. The long sweeping blues like Genepi, as well as the more difficult reds like the lengthy descent down to the Maurienne valley, along with the wide terrain of the remainder of the Trois Vallees, more than satisfy even the most mileage-hungry skiers during their ski vacation.

In poor weather, beginners in Val Thorens might get chilly and disoriented; Les Menuires provides them with a low-cost ski pass.

For novices, Val Thorens has mixed fortunes; in excellent circumstances, it is ideal, with nursery slopes immediately adjacent to the resort and a delightfully progressing network of blues radiating out from the resort center. In bad weather, however, newcomers might get extremely cold, disoriented, and irritated due to a lack of visibility.

There is a specific beginners area right above the Croisette area, but the issues occur when you’re ready to advance to blues: the local blues have inferior snow and a lot of traffic. There is, however, a reasonably priced novice ski ticket that covers six half-day lessons and access to 16 ski lifts.

Val Thorens boasts some of the greatest reds in the Three Valleys, while Les Menuires provides great road skiing.

Stronger intermediates have no need to fear the tougher slopes of Cime de Caron since they can reach almost the whole mountain in Val Thorens. Following there to the foot of the Caron bubble provides access to the Boismint chair and many of the Three Valleys’ greatest reds. This is a great option if you’re travelling down the valley toward Les Menuires.

The upper routes on the major western flanks are normally significantly steeper and endowed with superb snow. The red Col is a very nice, albeit rather short, route. The lowest ones are somewhat flatter and make great cruisers and confidence boosters. The Peclet glacier has a beautiful selection of mostly reds and blues on the Méribel side of the valley, notably Pluviomètre and Mont de la Chambre, which is an additional path down to Les Menuires.

This region includes some fantastic highway skiing. Pramint and, in particular, the lengthier Jerusalem (which, if you continue down Biolley to St Martin, offers you nearly 1000m of vertical) are fantastic reds on the resort’s wings. 3 Marches is a fast run, and Allamands features a terrific combination of humps and switchbacks. The majority of the reds from the Becca chair and the Mont de la Chambre are appropriate for intermediates, and the Masse is worth visiting only for the views from the summit.

The blues above Les Menuires may become rather busy with through traffic, so early intermediates are best off in the St Martin region. Under the new Granges chair, Grand Lac is a beautiful blue.

While the majority of the piste skiing in Val Thorens is not as steep as in other resorts, there are a few significant outliers. Combe de Caron is a long and twisting black with a perilously steep start, and Combe Rosael is without a doubt the most difficult path into the Maurienne valley and was, until recently, an itinerary. Similarly, the black underneath Cascades was originally off-piste and now serves as a terrific bumps run.

On a clear day, though, the main lure is the off-piste. The majority of the mountain has skiable terrain, so there is enough to explore in between the pistes, however look out for rocks. The slopes on the major flank that face north are all fairly accessible. For longer runs, the historic route from the summit of Cime de Caron that lowers 1300m to Lac du Lou is both beautiful and hard. Alternatively, at the top of the Col chair, descend 2000m vertically via the Gébroulaz Glacier into Méribel.

The new Bouchet chair in the Maurienne valley has eliminated the need to trek from the top of the Col chair to reach the Glacier du Bouchet. This, one of the most beautiful pieces of off-piste in the Alps, is now readily accessible from the top of the Sommet des Pistes down the 930-metre vertical that was temporarily the black Pierre Lory until the steep start claimed too many deaths.

All of the higher routes on the Masse have an excellent pitch, though only two are officially classed black, and the Masse itself has a nice steep shoulder at the beginning. Dame Blanche is also an excellent run in favorable circumstances, while Rocher Noir may generate good bumps. Leo Lacroix is steep, narrow, and lumpy over the valley, and the shorter sections of Pylones and Étélé may be difficult.

The true appeal here, though, is the off-piste. From above St Martin to the outskirts of Les Menuires, the slope is mainly unpisted, and there are several trails that descend down to the settlements that dot the road between the two. The region underneath and to the skier’s right of the St Martin 2 chair is ideal for advancing off-piste skiers.

The Masse is also an excellent place to go off-piste, with great lines going down under the Masse 2 bubble and the Lac Noir chair. The most relaxing route, though, overlooks Val Thorens and dips down the back down into the Vallon du Lou before winding back around the mountain on the Boulevard Cumin.

Les Menuires includes a snow park that is great for beginners since the jumps are labeled according to ability.

Val Thorens offers a snow park featuring a half-pipe and a network of jumps and rails, as well as a boardercross course in the Maurienne Valley. There is a snow park at Les Menuires that is great for learning since the jumps are graded in difficulty like the pistes, and there are 8 slides and rails, 4 huge airs, 2 table tops, and a quarter pipe. Another half-pipe is located near Reberty.

There are several artificial snowmaking facilities on the Val Thorens pistes to supplement natural snowfall and provide consistent skiing throughout the season. As France’s highest ski resort, it is one of the most snow-sure, receiving snow from late November to early May.

There is enough for families to do in Val Thorens, both on and off the slopes. The massive 3 Valleys ski area caters to all ski and snowboard levels, so there are plenty of slopes to keep the entire family pleased. The community is designed for easy access to the slopes, so you can be certain that the morning rush to the slopes and ski school will be a breeze.

Apres-ski, restaurants and other activities in Val Thorens

Val Thorens has a vibrant and diverse après-ski scene, with numerous pubs and restaurants near to the center, as well as three late-night clubs. Folie Douce, The Frog & Roast Beef, and Saloon Bar are the top apres bars, with Malaysia Club for late-night partying.

A decent sports center with a swimming pool and squash courts is available. Skidoo trips in the evening are popular and highly recommended. For a more leisurely evening, go to the movies, where many films are in English.