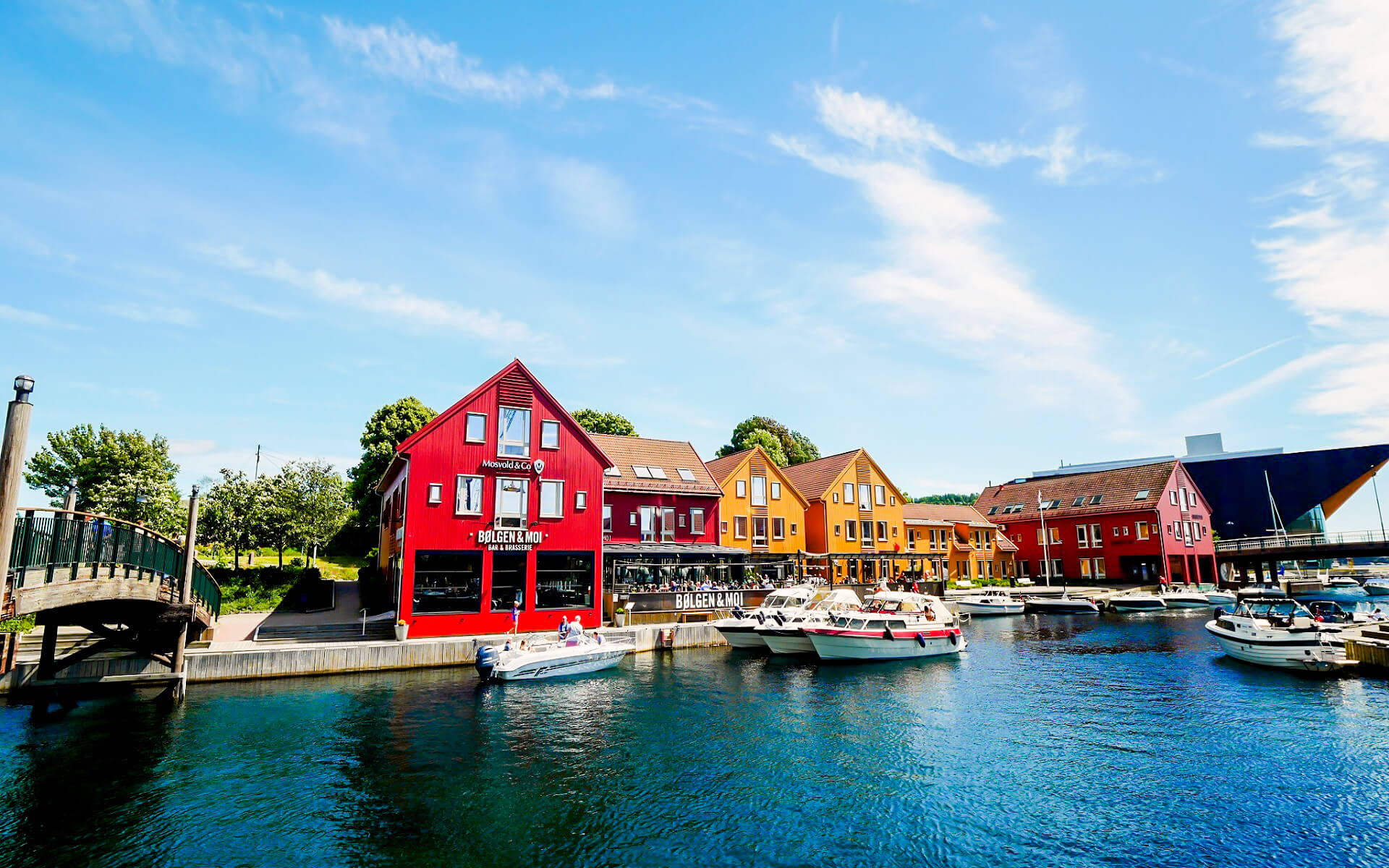 Kristiansand is the county capital of Vest-Agder in southern Norway, as well as a city and municipality. Kristiansand is Norway’s fifth biggest city, and the municipality is the sixth largest, with a population of 85,681 as of January 1, 2014.

Kristiansand is accessible via four major roads: European Route E18 from Oslo, Aust-Agder, and covers the eastern part of the city; European Route E39 from Stavanger, Flekkefjord, and the coast towns and villages in Vest-Agder; Norwegian National Road 9 from Evje, Setesdal, and Grim; and Norwegian National Road 41 from Telemark, northern Aust-Agder, Birkeland, Tveit, and the airport Kristiansand Varodd Bridge is a large bridge that is part of the E18 highway that spans Topdalsfjorden.

Kristiansand is a popular summer tourist destination, with many people drawn to its zoo, Kristiansand Zoo and Amusement Park, located just east of the city. After Holmenkollen, this is Norway’s second most visited attraction, with 925,000 visitors in 2012. Its animals, the majority of which are kept in their native habitats, include wolves, tigers, lions, and lynx. The zoo is open all year, whereas the amusement park is only open during the summer.

The Quart festival was a five-day yearly music event held in Kristiansand in early July. There were enormous stages on Odderya as well as smaller sites across the city. The event was founded in 1991 as Qvadradurmusivalen, but the following year it was renamed the more catchy Quart Festival. It included globally recognized artists as well as hiring talents who went on to become internationally known. It was the biggest music festival in Norway for many years, until it was challenged in summer 2007 by the Hovefestivalen in Tromya, Arendal, and various Oslo-based events. The group filed bankruptcy in early June 2008; the event reappeared in 2009 under the name Quart, but went bankrupt again.

Many additional events take place in Kristiansand throughout the year. Protestfestival, annually in September, was founded in 2000 with the goal of addressing political apathy and indifference via discussions, concerts, and lectures, as well as performance art and films. Protestfestival promises to draw anarchists, communists, hippies, as well as conservative Christians and capitalists, and to promote contact among these diametrically opposed groups. Other festivals in September include Southern Discomfort, the Bragdya Blues Festival in June, the Dark Season Festival in October, and Cultural Night and the International Children Film Festival in April.

The climate in Kristiansand is marked by changes in temperature and precipitation at the Four Seasons, yet the climate is quite mild due to warm air carried over the Atlantic by the Gulf Stream. In comparison to the rest of Norway, Kristiansand normally gets a lot of summer sun. Summer weather makes Kristiansand a popular coastal resort for Norwegians from other parts of Norway. Winter snowfall may be substantial with south-southwesterly winds (the snow record at Kristiansand Airport, Kjevik is 170 centimetres), although the snow seldom lasts long on Skagerrak’s shore.

Kristiansand occupies a strategic position on the Skagerrak and was of great military and geopolitical importance until the completion of the Kiel Canal, which connects the North Sea and the Baltic Sea. The city was therefore used as a military fortress for generations, first as the royal seat of Harald Fairhair, then as a Danish-Norwegian castle and finally as a garrison town. Kristiansand serves as a gateway to and from the mainland, with ferry connections to Denmark and as the terminus of the railroad line that runs along Norway’s southern border.

This part of Agder is geologically part of the Swedish-Norwegian basement mountain shield, the southwestern section of the Baltic Shield, and consists of two major geological formations of Proterozoic rocks formed during the Gothic Orogeny and the later Swedish-Norwegian Orogeny, with considerable metamorphism occurring during the latter. The substrate consists of 1,600- to 1,450-million-year-old schists, quartzites, marbles, and amphibolites, with some hornblende gneisses and acidic granite and granodiorite surface structures (generally 1,250- to 1,000-million years old, locally 1,550- to 1,480-million years old) overlying these acid surface structures. The Bamblefelt geologic zone begins in the eastern part of the municipality and extends to Grenland.

Large granite blocks show the latest Swedish-Norwegian formations. There are other occurrences of gabbro and diorite, as well as the more rare eclogite. This area was not affected by the Caledonian orogeny. Fault lines run from southwest to northeast. In ancient times, a volcano off Flekkeroy deposited volcanic rock north of the center of Kristiansand, at the site of the Eg estate, where the hospital in southern Norway is located today.

Christianssands Bryggeri is a beer and soft drink manufacturer with a long history in the city. The brewery was founded in 1859, and all of its products use spring water from the company’s own spring, known as Christian IVs kilde (Christian IV’s spring).

The Korsvik industrial district on the east side of the Kristiansandsfjord is home to firms such as National Oilwell Varco and Aker MH that work on drilling technologies, cranes, winches, and other equipment for the global petroleum sector. Elkem, which has been owned by China National Bluestar since 2011, operated a ferrosilicon and microsilica refining plant at Fisk in Vgsbygd for many years before being replaced in the early twentieth century by Elkem Solar, which produces polycrystalline silicon for wafers used in the solar cell industry. It employs around 225 people.

Srlandschips is a crisps brand made in Norway. The potatoes are often imported from Denmark. Scandza AS owns Srlandschips, which is one of Norway’s most popular potato chip brands today. It contains a wide range of flavors and spices.

Dampbageriet is a significant bakery business situated in Vest-Agder that was founded in Kristiansand in 1862 and has four locations in the city.

Sparebanken Sr is a savings bank that serves the counties of Vest-Agder, Aust-Agder, and Telemark. It was one of the earliest banks in Norway when Christiansand Sparebank began in 1824.

Hennig-Olsen Iskremfabrikk is a significant Norwegian ice cream manufacturer situated in Kristiansand. Hannevika is the location of the plant.

Kristiansand was a lucrative site for shipbuilders Kristiansands Mekaniske Verksted and P. Hivolds Mekaniske Verksted since it was a comparatively significant shipping town. Shipping businesses were formerly the backbone of the local economy, but just a few remain. The Rasmussen Group, once a shipping business, is now an investing firm. Kristiansand still has significant shipbuilding and repair facilities that serve Norway’s North Sea oil sector. The HVDC Cross-Skagerrak static inverter facility is situated in Kristiansand.