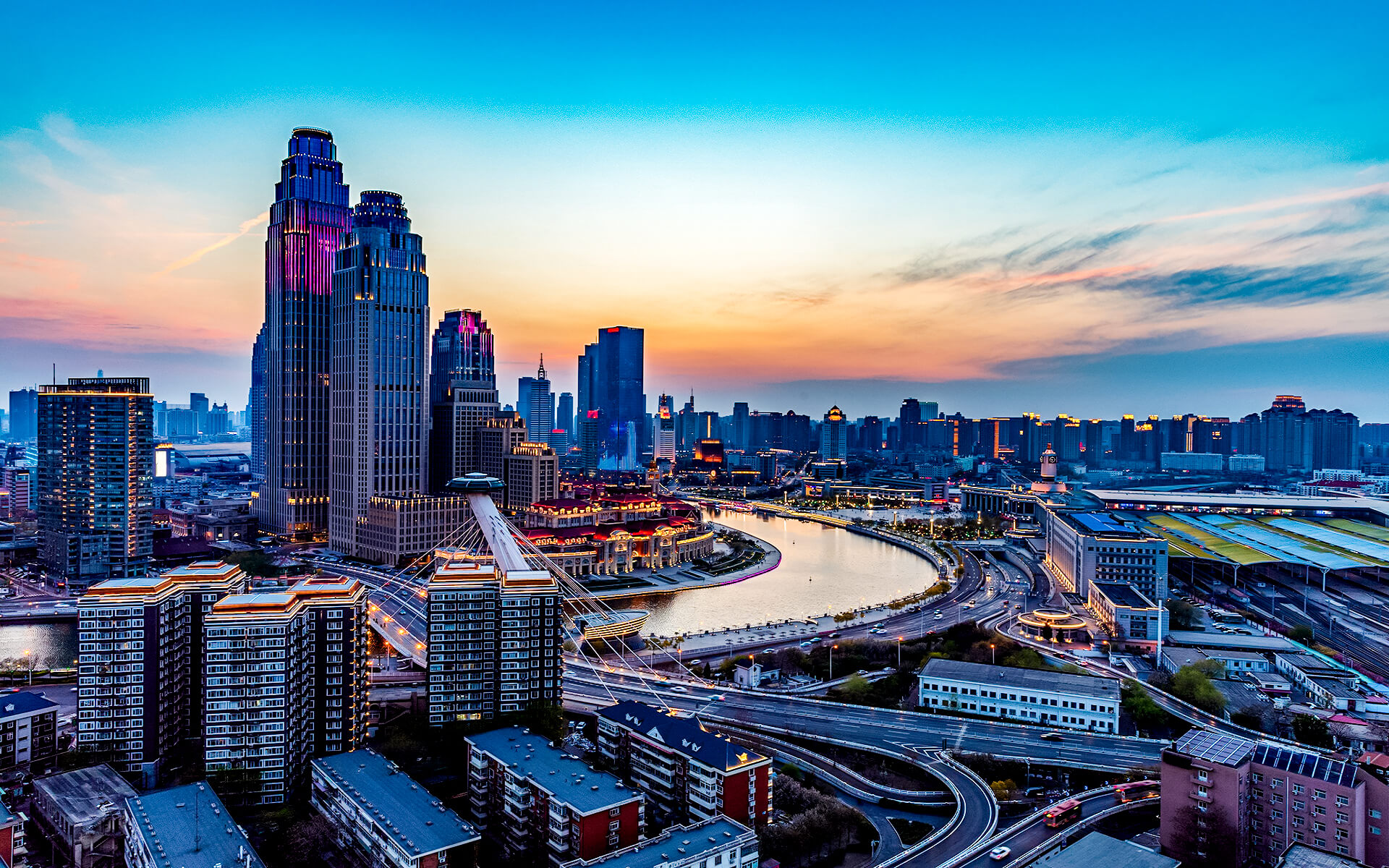 Tianjin (meaning “Heaven’s Ferry”) is a northern coastal Chinese city and one of China’s five national core cities, with a total municipal population of 15,469,500. It is managed as one of the PRC’s four direct-controlled municipalities, and hence is directly administered by the central government. Tianjin has borders with Hebei Province and Beijing Municipality, and is surrounded to the east by the Yellow Sea’s Bohai Gulf. It is the biggest coastal city in northern China and is part of the Bohai Economic Rim.

Tianjin has the fourth biggest urban population in China, behind Shanghai, Beijing, and Guangzhou. Tianjin is the sixth most populous administrative region in Mainland China. Tianjin’s walled city was established in 1404. Tianjin has been a key seaport and gateway to the nation’s capital since it became a treaty port in 1860. During the Boxer Rebellion, the city served as the headquarters of the Tianjin Provisional Government. Tianjin grew to become one of China’s greatest cities during the late Qing dynasty and the Republic of China. Many western-style houses and mansions were built in concessions during the period, many of which are still standing today. Tianjin had a downturn after the establishment of the People’s Republic of China as a result of central government policies and the Tangshan earthquake, but rebounded by the 1990s. Tianjin is now a dual-core metropolis, with the major urban region (including the old city) situated along the Hai River, which links to the Yellow and Yangtze Rivers through the Grand Canal; and Binhai, a New Area urban core located east of the old city on the shore of the Bohai Sea. As of the end of 2010, over 285 Fortune 500 corporations have established a foothold in Binhai, China’s new development pole and a center of innovative industrial and financial activities.

The city offers numerous attractions, but it’s the streetscapes – an assemblage of ancient nineteenth- and early twentieth-century European architecture contrasted with modern China’s concrete and glass monoliths – that are the most absorbing. Though large swathes of the city are being renovated, most of the colonial architecture has been preserved, and the shopping choices, particularly for antiques, just about justify a day trip from the capital, which is an hour distant by train.

The port city drew the attention of maritime Western nations in the nineteenth century, who used the boarding of an English ship by Chinese forces as a reason to declare war. They were guaranteed of victory with well-armed gunboats, and the Treaty of Tianjin, signed in 1856, granted the Europeans the right to build nine concessionary posts on the mainland from which to conduct commerce and sell opium. Along the banks of the Hai River, these concessions were self-contained European dream worlds: the French erected beautiful châteaux and turrets, while the Germans created red-tiled Bavarian homes. Tensions between the indigenous population and the foreigners erupted in the Tianjin Incident of 1870, when a Chinese mob attacked a French-run orphanage, and again during the Boxer Rebellion of 1900, when the foreigners demolished the walls surrounding the old Chinese city to keep an eye on its residents.

The dense network of ex-concession streets south and west of the central railway station, as well as south of the Hai River, are currently the most popular tourist destinations. The châteaux of the French concession, which today form the downtown area directly south of the river, and the pretentious mansions erected by the British east of here are unmistakable. Farther east, also south of the river, the architecture of an otherwise unimpressive region is dotted with stern German structures.

Tianjin has a four-season, monsoon-influenced climate that is characteristic of East Asia, with cold, windy, extremely dry winters reflecting the effect of the enormous Siberian anticyclone and hot, humid summers caused by the monsoon. Spring in the city is dry and windy, with sandstorms coming in from the Gobi Desert that may last several days. The monthly 24-hour average temperature varies from 3.4 degrees Celsius (25.9 degrees Fahrenheit) in January to 26.8 degrees Celsius (80.2 degrees Fahrenheit) in July, with an annual mean of 12.90 degrees Celsius (55.2 degrees Fahrenheit). The city enjoys 2,522 hours of bright sunlight each year, with monthly percent potential sunshine ranging from 48 percent in July to 61 percent in October. The city sits inside the semi-arid zone, with sections of the municipality being humid continental, and has a low annual total precipitation of 511 millimetres (20.1 in), with approximately three-fifths of it happening in July and August alone.

Tianjin is situated on the west coast of the Bohai Gulf, looking out to the provinces of Shandong and Liaoning across those seas. It is bordered by Beijing 120 kilometers (75 miles) to the northwest, and Hebei surrounds it on all sides save the east. The entire area is 11,860.63 square kilometers, with latitudes ranging from 38° 34′ to 40° 15′ N and longitudes ranging from 116° 43′ to 118° 04′ E. (4,579.41 square miles). There is a shoreline of 153 kilometers (95 miles) and a land border of 1,137.48 kilometers (706.80 miles). It is located near the northern end of China’s Grand Canal, which links the Yellow and Yangtze rivers. The municipality is mostly low and marshy along the shore, although it becomes mountainous in the far north, where the Yan Mountains intrude into northern Tianjin. The municipality’s highest point is Jiuding Peak in Ji County, on the northern boundary with Hebei, at an elevation of 1,078.5 m. (3,538 ft).

The Hai River originates in Tianjin Municipality at the confluence of the Ziya River, Daqing River, Yongding River, North Grand Canal, and South Grand Canal, and flows into the Pacific Ocean at Tanggu District. Major reservoirs include the Beidagang Reservoir in Dagang District’s extreme south and the Yuqiao Reservoir in Ji County’s extreme north.

In 2009, the municipality’s GDP increased by 16.5 percent, behind just the 16.9 percent pace in resource-rich Inner Mongolia and almost double the national growth rate. Infrastructure expenditure will help Tianjin’s economy in the near run. There are major efforts underway to expand the metro system as well as enhance road and rail connections to the adjacent national capital, Beijing.

Despite the fact that the worldwide financial crisis has spread swiftly and the rate of global economic development is decreasing, the Tianjin economy continues to expand at a steady and rapid pace. Tianjin’s total production value in 2008 was RMB 635.438 billion, an increase of 16.5 percent, or RMB 130.398 billion, over the previous year, the first time with an increase of more than RMB 100 billion. Tianjin’s total production value per capita was US$7,800, approaching the threshold of middle-developed nations. Tianjin has achieved a direct contractual foreign investment of up to $13.256 billion, a 15.1 percent rise, and actual contributed capital of $7.420, a 40.6 percent increase year on year. Tianjin has had 21,048 foreign-invested enterprises thus far, totaling $47.2 billion in total foreign investment.

Simultaneously, Tianjin is vigorously pursuing financial reform and innovation. By the end of 2008, the China Bohai Bank, the first national commercial bank limited by shares with headquarters in Tianjin, had opened six branches and 14 public offices. Following State Council clearance, the national non-listed public enterprises stock exchange market (OTC) was formed in Tianjin in March 2008. Tianjin has emerged as China’s pilot city with the greatest industrial investment money. The China National Private Equity Forum was hosted in Tianjin once again, with over 500 investment businesses and private fund institutions, as well as approximately 2,000 rising enterprises, participating in global capital circulation through this Capital Connection in Tianjin. Tianjin considers futures sector growth to be an important aspect of its financial reform and innovation, owing to the city’s strong real goods exchange. The Yide Futures Broker Co. relocated its headquarters to Tianjin in July 2008. The Tianjin Finance Town Project, with North Jiefang Road as its axle, has begun. Within 10 years, it will have evolved into a complete, open, and intellectual financial service sector.

Tianjin is growing into a global center for international shipping and transportation, contemporary manufacturing, and R&D. Tianjin’s nominal GDP increased by 2.8 times from 184 RMB billion in 2001 to 505 RMB billion in 2007. Electronic information technology, automotive, biotechnology and pharmaceuticals, metallurgy, and petrochemicals are Tianjin’s main industries. The new coastal region, which includes Tianjin Port, Tianjin Economic and Technology Development Area, and Tianjin Bonded Area, has attracted several world-renowned companies like as Motorola, Toyota, and Samsung. Globalization and the opening up of the economy to the rest of the world have had a significant impact on Tianjin’s economic development.

Tianjin’s government finance income more than tripled from 16 RMB billion in 2001 to 54 RMB billion in 2007. As income increased, so did spending on research and technology, education, culture, health, and sports, reaching 10 billion RMB in 2004, accounting for 30.7 percent of the city’s financial expenditure. Revenue has also been utilized to construct infrastructure such as new roads, bridges, and commercial buildings. One of the 11th Five-Year Plan’s development goals is to have financial income expand at a pace of 16 percent each year.

Tianjin’s overall fixed-asset investments climbed from 62 RMB billion in 2001 to 239 RMB billion in 2007, reflecting a 3.9-fold growth over a six-year period. Tianjin has established competitive advantages in the investment environment by providing accessible port transportation services, an open market, innovative logistic services, enticing preferential policies, and efficient government services. By the end of 2004, more than 118 nations and regions had invested in Tianjin, resulting in the establishment of nearly 16, 000 businesses. Tianjin is now transforming into an eco-city, which opens up several opportunities for investments in fixed assets in the next years.