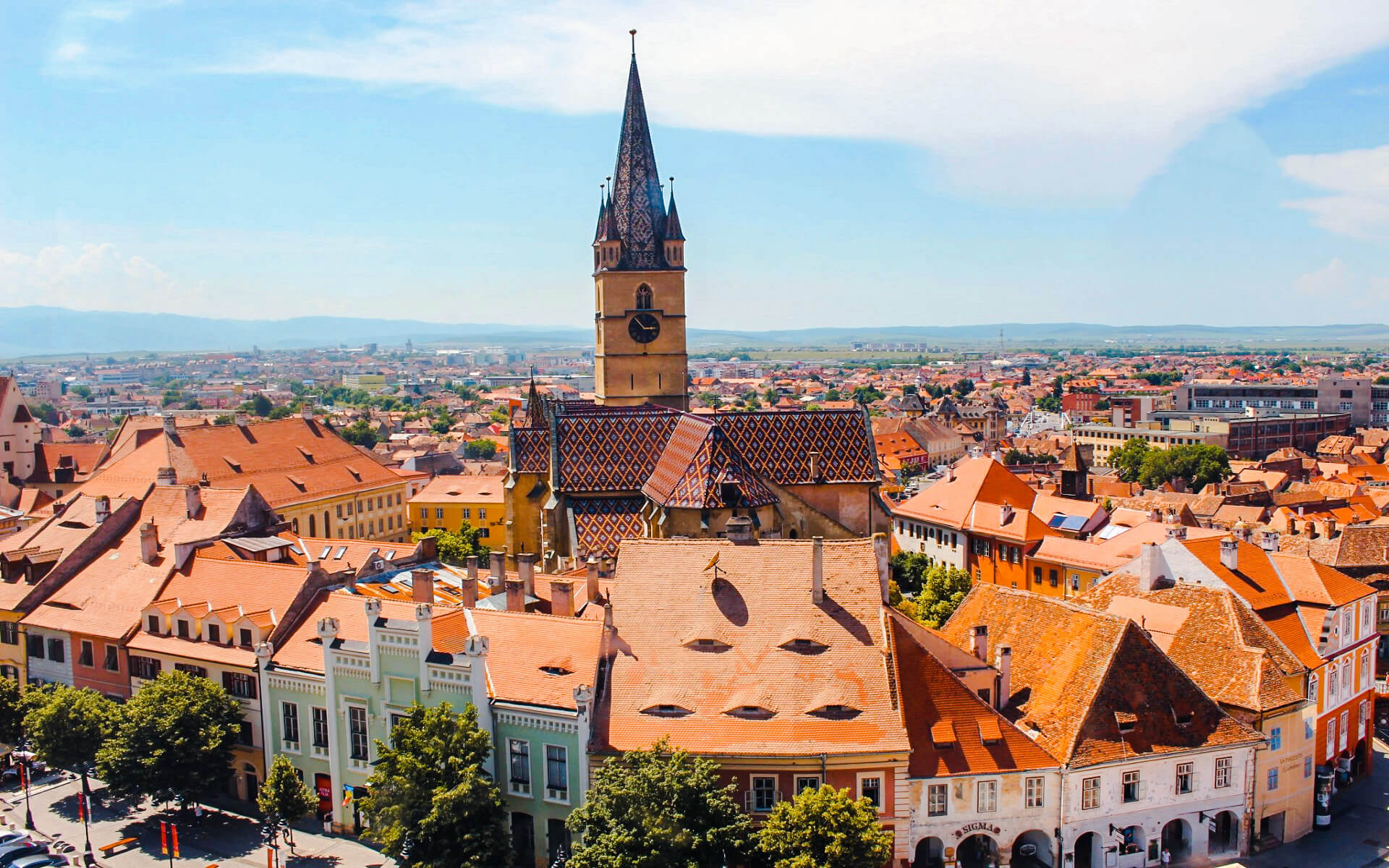 Sibiu is a city in Romania’s Transylvania region, with a population of 147,245. The city is located 215 kilometers (134 miles) north-west of Bucharest on the Cibin River, a tributary of the Olt River. Sibiu was the capital of the Principality of Transylvania from 1692 until 1791 and again from 1849 to 1865.

Sibiu is one of Romania’s most prominent cultural centers, and it was named the European Capital of Culture in 2007, together with the city of Luxembourg.

The city is in charge of the Păltiniş ski resort.

Sibiu, known in German as Hermannstadt and in Hungarian as Nagyszeben, has long been the center of Romania’s German minority. Even today, it is home to Romania’s biggest German population, and the Germanic atmosphere of the region has been preserved thanks to local government efforts. Sibiu also boasts a sizable Hungarian population, a holdover from Transylvania’s time as part of the Hungarian Empire and, subsequently, Austria-Hungary. Despite this, Sibiu is undeniably Romanian (ethnic Romanians make up 95% of the population today) and manages to blend these three cultures, as well as smaller minority of Roma, Slovaks, and Ukrainians, into a city that is as magnificent as it is active.

Sibiu is now a cultural and tourism icon in Romania, drawing visitors with its beautiful medieval beauty, fantastic views of the surrounding landscapes, superb restaurants, and gorgeous parks. Sibiu is likewise doing well economically today, with a per capita income that is greater than the Romanian average.

Because it was the European Capital of Culture in 2007, much of the city was rebuilt. Sibiu’s population are far more easygoing and pleasant than those in Bucharest, and most of the city is walkable. There are even facilities for bicycling (a rarity in car-obsessed Romania)

Sibiu and its environs are among Romania’s most popular tourist destinations. It is one of the finest maintained historical sites in the nation, with several of its medieval defenses in great condition. Its historic core was designated a UNESCO World Heritage Site in 2004. Sibiu and its environs are home to 12 museums, which include art collections, paintings, and exhibitions in decorative arts, archeology, anthropology, history, industrial archeology, and the history of technology and natural sciences.

The city is also close to the Făgăraş Mountains, a popular trekking destination, as well as the Păltiniş and Arena Platos ski resorts, both of which are popular winter vacation destinations, and it is located in the heart of Transylvania’s former Saxon communities, which are known for their fortified churches.

Much of the city’s appearance is due to its location, which is readily defendable yet allowing for horizontal expansion. Sibiu’s ancient city is located on the right bank of the Cibin River, on a hill approximately 200 meters from the river. It is divided into two sections: the Upper Town and the Lower Town. Historically, the Upper Town was the richer and more commercial region, while the Lower Town was the manufacturing sector.

The Lower Town (German: Unterstadt, Romanian: Oraşul de jos) evolved around the oldest defenses and encompasses the territory between the river and the hill. The streets are large and broad by medieval city standards, with a few tiny city squares thrown in for good measure. The style is rustic, with two-story buildings with steep roofs and gates leading to interior courtyards.

The majority of the external defenses were destroyed by industrial growth and contemporary urban planning in the mid-late nineteenth century; just four towers remain. The Independenţa Highschool is a building linked with the period’s newer urbanism.

This neighborhood is home to the city’s oldest church, which dates back to 1292.

The Upper Town (German: Oberstadt, Romanian: Oraşul de sus) is organized around three city squares and a series of streets that run up the hill’s crest. The region comprises the majority of the city’s sites of interest since it is the principal place for burgher activity.

Grand Plaza (German: Großer Ring, Romanian: Piața Mare) is the city’s biggest square and has been the core of the city since the 15th century. It is one of the biggest in Transylvania, measuring 142 m long and 93 m broad.

On the north-western corner of the plaza is Brukenthal Palace, one of Romania’s most significant Baroque landmarks. It was built between 1777 and 1787 as the primary mansion of Transylvania Governor Samuel von Brukenthal. It holds the major component of the National Brukenthal Museum, which was founded in 1817 and is one of the world’s oldest museums. The Blue Home, also known as the Moringer House, is located next to the palace and is an 18th-century Baroque house with the historic coat of arms of Sibiu on its façade.

The Jesuit Church and its appendages, the old house of the Jesuits in Sibiu, are located on the north side. Also on the north side, around the turn of the twentieth century, an Art Nouveau structure was built on the west side, which today houses the mayor’s office.

The Council Tower, one of the city’s icons, is next to the Jesuit Church on the north side. This ancient 13th-century defense tower has been restored many times throughout the years. The neighboring structure was formerly the City Council’s meeting place; underneath it is a passageway connecting the Grand Square with the Lesser Square.

Two- or three-story residences with lofty attics and tiny windows known as the city’s eyes along the south and east sides. The majority of these residences date from the 15th through the 19th century and are Renaissance or Baroque in style.

Lesser Plaza (Small Square, German: Kleiner Ring) is a smaller square located in the northern portion of Upper Town. Following the 2007 restoration, there has been a surge in the number of small businesses in this neighborhood, such as bars and restaurants.

Small, tiny corridors link the plaza to the other two squares and to adjacent streets. Ocnei Street, which splits the plaza in two, is the major approach from the Lower City. The roadway runs under the Liar’s Bridge, Romania’s first iron-cast bridge (1859).

The House of the Arts, a 14th-century arched edifice originally belonged to the Butchers’ Guild, is another landmark of the city to the right of the bridge. The Luxemburg House, a four-story Baroque structure, is located on the bridge’s left side.

Huet Square is the third of Sibiu’s three major squares. The Evangelical Lutheran Cathedral in its heart is its most remarkable feature. It was here that the first defenses were erected in the late 12th or early 13th centuries. The majority of the structures around this area are Gothic in style. The Brukenthal Highschool, built on the site of a historic 14th-century school, is located on the west side.

Sibiu’s fortifications elevated the city to the status of one of the most significant fortified cities in Central Europe. Several rings were constructed around the city, the most of which were made of clay bricks. The defenses to the south-east are the finest preserved, with all three parallel lines still visible. The first is an outside earth mound, the second is a 10-meter-high red brick wall, and the third line is made up of towers connected by another 10-meter-high wall. All buildings are linked by a maze of tunnels and corridors meant to provide transportation between the city and the lines of defense.

More contemporary components, including leaf-shaped bastions, were added to the defenses in the 16th century. Two of them have remained to this day as the Haller Bastion (which runs the length of Coposu Boulevard) and the “Soldisch Bastion.”

The Stairs Passage goes down to the lower area of Sibiu. It drops under the support arches along several fortifications. It is the most gorgeous of the various tunnels that connect the city’s two sides.

Sibiu has a temperate-continental climate, with typical temperatures ranging from 8 to 9 degrees Celsius (46 to 48 degrees Fahrenheit). The average annual rainfall is 662 l/m2, and there are around 120 days of heavy frost.

Sibiu is traversed by the Cibin River and a few minor streams. Sibiu’s geographical location makes it one of Romania’s most significant transportation hubs, with major highways and railway lines running through it.

Sibiu is a vital economic centre for Romania, with a high level of international investment. It is also a significant center for the production of automobile components, with ThyssenKrupp Bilstein-Compa, Takata, Continental, and NTN-SNR ball bearings having plants there. Machine components, textiles, agro-industry, and electrical components are among the other local industries (Siemens).

A business zone in the commune of elimbăr is crucial to the economy of Sibiu. It is home to a mall and other major stores.

Tourism is another key aspect in the city’s economy, and it has been steadily expanding since 2007.