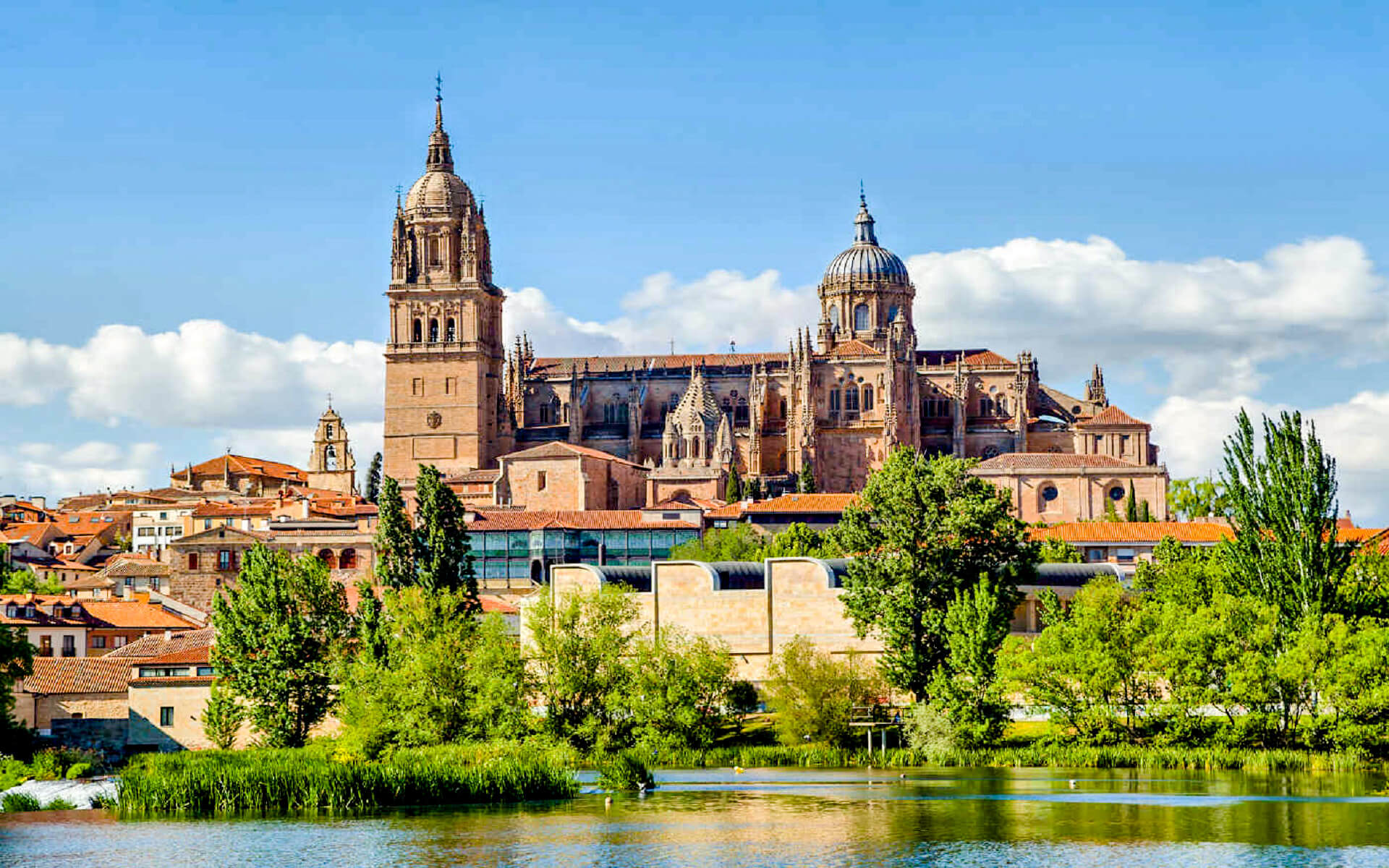 Salamanca is a historic Celtic city in northwest Spain that serves as the seat of the Province of Salamanca in the Castile and León region. In 1988, the city’s Old City was designated a UNESCO World Heritage Site. Salamanca has a metropolitan population of 228,881 people, according to the National Institute of Statistics (INE), making it the second most populous city in Castile and León, behind Valladolid (414,000), and ahead of Leon (187,000) and Burgos (187,000). (176,000).

It is one of the most prominent university cities in Spain, accounting for 16% of the Spanish language teaching market in the country. Salamanca draws tens of thousands of foreign students, resulting in a diversified atmosphere.

It lies around 200 kilometers (120 miles) west of Madrid and 80 kilometers (50 miles) east of the Portuguese border. The University of Salamanca, established in 1218, is the oldest university in Spain and the fourth oldest in the world, but it was the first to be granted status by Pope Alexander IV, who granted its degrees international validity. With 30,000 students, the university, along with tourism, is a major source of revenue in Salamanca.

Salamanca is a town in western central Spain with a population of roughly 150,000 people. It is the seat of Salamanca province, which is part of the Castile and Leon autonomous area (Spanish: Castilla y León). In 1988, Salamanca’s historic center’s Romanesque, Gothic, Moorish, Renaissance, and Baroque structures were included on the UNESCO World Heritage List.

The city is situated on a plateau by the Tormes River and is regarded as one of Europe’s most stunning Renaissance towns. The buildings are made of sandstone excavated locally from the Villamayor quarry, and when the sun sets, they shine gold, orange, and pink. Salamanca has earned the moniker “La Dorada,” or “Golden City,” due to the radiance of its stones.

In 1218, Alfonso X of León (Alfonso The Wise) established the University, one of the world’s earliest. Pope Alexander IV referred to it as “one of the four main lights of the globe” in 1254.

Salamanca was designated as the European Capital of Culture in 2002.

Shopping is an important component of Salamanca’s culture. Throughout the city, traditional family-owned establishments coexist with various national and international merchants. Calle Toro, which starts at the northwest corner of Plaza Mayor, features a lot of shopping alternatives.

The city also has a shopping center (centro comercial) with a range of retailers and eateries. To get there, you’ll need to use a vehicle, bus, or taxi.

Most shops open at 10 a.m., shut for two or three hours for lunch (2 p.m.), and reopen at 9 p.m. On Sundays, almost all shops, including food stores, are closed. There are a few convenience shops known as 24 hour stores that are open 24 hours a day, seven days a week.

Every Sunday, an outdoor market known as the Rastro pops up, where residents and visitors alike may purchase for a variety of items such as shirts, coats, hats, purses, jewelry, watches, perfumes, colognes, and other accessories. The Rastro is situated on Av. de la Aldehuela, about 2 miles west of Plaza Mayor and a 20-minute walk away.

According to the Köppen climatic classification, Salamanca has a cold semi-arid climate (BSk) bordering on a warm-summer Mediterranean climate (Csb), with frigid winters and warm dry summers owing to the altitude.

The city is located on numerous hills by the Tormes River, which is bridged by a 150-meter-long bridge constructed on 26 arches, fifteen of which are Roman in origin and the rest are from a 16th-century flood rebuild.

The university and tourism dominate the city’s economy, although agriculture and livestock husbandry, as well as building and industry, are also important. Not unexpectedly, the service industry employed 83 percent of the working population in December 2007, or 55,838 people.