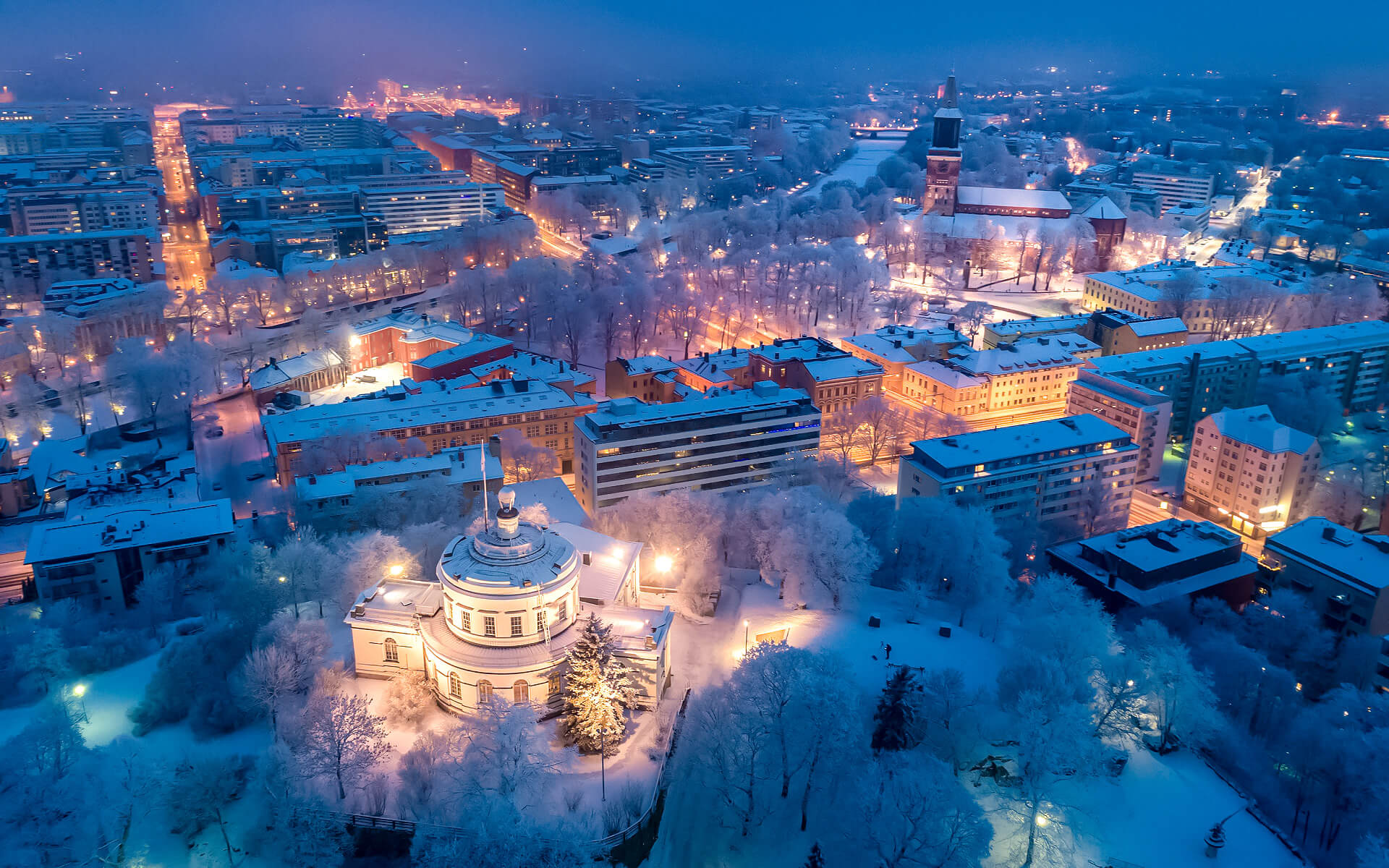 Turku is a city on Finland’s southwest coast, near the mouth of the Aura River, in the Southwest Finland area. Turku as a town was established during the 13th century and was most likely created around the end of the 13th century, making it Finland’s oldest city. It soon rose to prominence as Finland’s most significant city, a position it held for hundreds of years. Turku remained the most populated city in Finland until the end of the 1840s, when Finland became part of the Russian Empire (1809) and the seat of the Grand Duchy of Finland was transferred to Helsinki (1812), and it remains a regional capital as well as an important commercial and cultural hub.

Because of its lengthy history, it has seen many significant events and has had a significant impact on Finnish history. Turku, together with Tallinn, Estonia’s capital city, was named the 2011 European Capital of Culture. It was designated as Finland’s official Christmas City in 1996.

Turku is a significant commercial and passenger seaport due to its position, with over three million people passing through the Port of Turku each year to Stockholm and Mariehamn.

Turku has a population of 183,811 people as of September 30, 2014, making it Finland’s sixth biggest city. The Turku sub-region has 303,492 residents on August 31, 2008, making it Finland’s third biggest urban area behind the Greater Helsinki area and the Tampere sub-region. The city is officially multilingual, with 5.2 percent of its residents identifying Swedish as their native language.

Turku is Finland’s oldest city and former capital. It was founded in the 13th century, making it one of Finland’s unique – and by far the biggest – medieval towns. Turku is the birthplace of Finnish culture, having served as an important gateway to Finland for worldwide influence throughout the years.

The river Aura, which cuts through Turku city center, is the city’s heart and soul: here is where Turku was founded, and a big portion of city life – museums, attractions, restaurants, and cafés – still revolves around the river’s banks. The river banks, together with the island of Ruissalo, with its oak trees and 19th century houses, constitute a national urban park that allows for a lovely promenade from, example, Finland’s national shrine, Turku Cathedral, to Turku Castle, which used to host Swedish Kings. Turku is at its finest during the summer, when it offers a plethora of events such as rock festivals, chamber music festivals, and a medieval fair.

In addition to cultural attractions and museums, Turku draws tourists because of the Archipelago Sea, which spans all the way from Turku to Land and on to Stockholm, constituting the world’s biggest archipelago by number of islands and islets.

Turku, like the rest of Finland, has four different seasons. Turku has a humid continental climate since it is located on the Baltic Sea and is protected by the Archipelago Sea’s islands. The city, like most of southern Finland, has warm summers with temperatures reaching 30°C (85 °F) and cold winters with regular snowfall and temperatures as low as -25°C (-15 °F). The warm season from late May to early September is unquestionably the ideal time to come. If you come in the winter and encounter slush, go a little farther inland (a local bus will bring you there) and you will most likely see snow.

Turku has 10 bridges crossing the Aura River. Auransilta, the oldest of the present bridges, was built in 1904. Kirjastosilta (‘library bridge’), a pedestrian-only bridge erected in 2013, is the most recent. A well-known feature of the city is the Föri, a tiny ferry that takes walkers and bicycles over the river for free.

The Turku Region (LAU 1), with a population of over 300,000, is Finland’s third biggest urban region, behind Greater Helsinki and the Tampere area. In addition to the city, the area comprises the municipalities of Askainen, Kaarina, Lemu, Lieto, Masku, Merimasku, Mynämäki, Naantali, Nousiainen, Paimio, Piikkiö, Raisio, Rusko, Rymättylä, Sauvo, Vahto, and Velkua.

The city region of Turku, with a population of roughly 235,000 people, is a more exclusive definition of the urban area, comprising of four main municipalities: Kaarina, Raisio, Naantali, and Turku.

The Port of Turku and other service-oriented sectors are at the heart of the city’s economy. The city is also a well-known high-tech hub; the Turku Science Park region near Kupittaa is home to approximately 300 biotechnology and information technology enterprises, as well as numerous institutions of higher learning that collaborate closely with the business sector. This cooperative aspect is seen as especially significant in terms of the city’s anticipated future economic growth, as detailed in the Turku Strategy, which is presented yearly by the city council. HKScan and Hesburger are two of the largest Finnish enterprises with corporate headquarters in Turku. Bayer, Fläkt Woods, Meyer Werft, Orion Corporation, and Wärtsilä are among the other prominent corporations with operations in Turku.

The city’s unemployment rate was 9.4 percent in 2007. Unemployment, on the other hand, is an issue in the districts of Pansio, Lauste, and Varissuo, where it hovers around 16%.

SparkNet, Finland’s biggest WiFi network, was founded in 2003 and provides smooth access to wireless internet in your home, office, and on the road. It works with your phone, laptop, or PDA. It is free for all Turku municipal employees as well as students at the city’s schools and institutions. Other people may buy the connection on SparkNet’s website.

Aside from the SparkNet, most of Turku is covered with wifi (“wlan”) hotspots. Most cafés and pubs provide wireless internet access without needing a paying client. Some restaurants will do the same, however they may need you to buy something.

The main library in the city has public computers with Internet connection. Most of the time, you’ll be able to locate a free one, at least for rapidly checking e-mail.