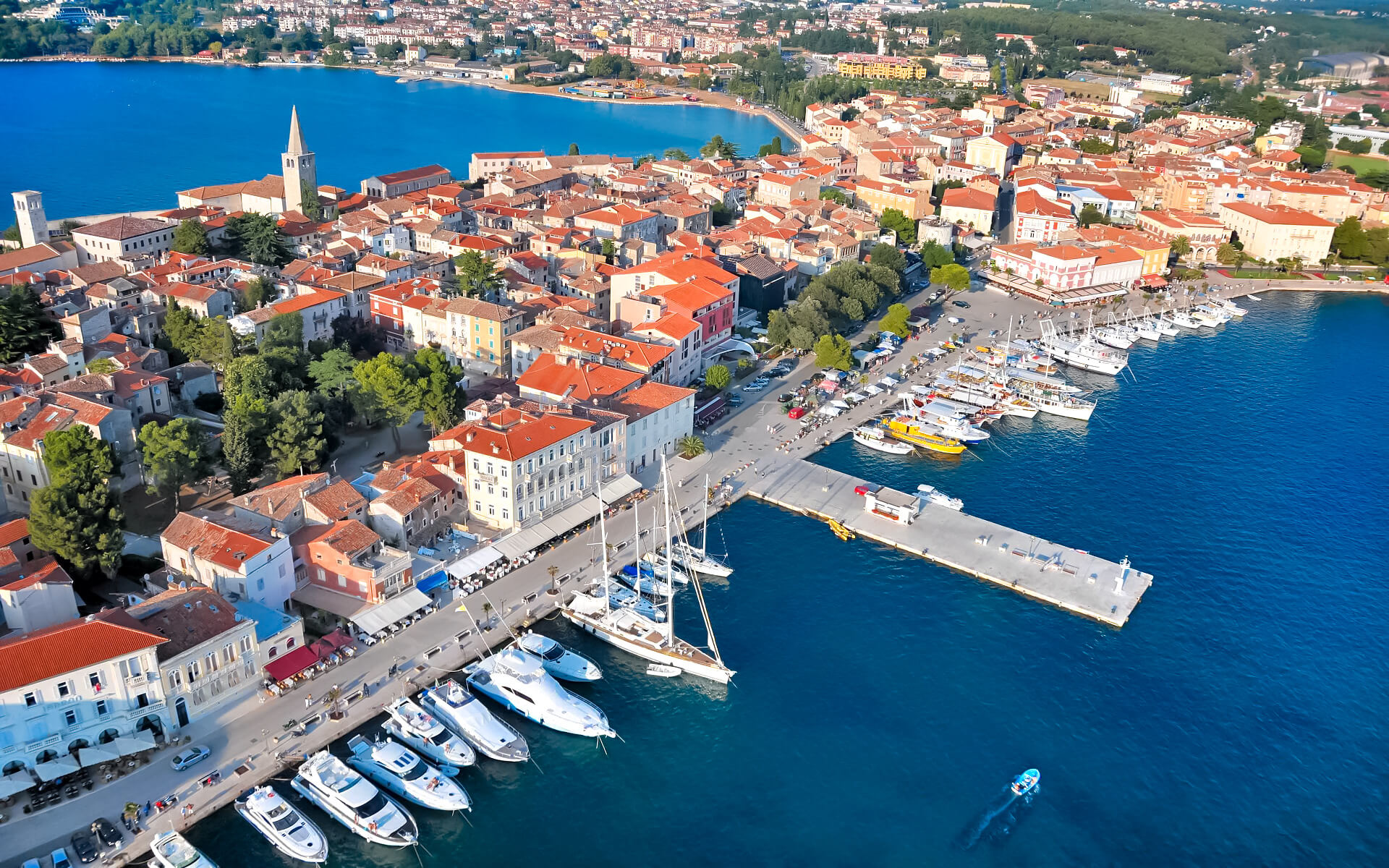 Poreč is a town and municipality in Istria County, Croatia, on the western shore of the Istrian peninsula. Its most notable monument is the 6th century Euphrasian Basilica, which was named a UNESCO World Heritage Site in 1997.

Pore/Parenzo is a nearly 2,000-year-old town built around a port sheltered from the sea by the little island of Sveti Nikola/San Nicola (Saint Nicholas). The town’s population of around 12,000 people lives largely on the periphery, while the larger Pore/Parenzo region has a population of about 17,000 people. The municipal territory is 142 square kilometers (55 square miles), with a coastline that stretches from the Mirna River near Novigrad/Cittanova to Funtana and Vrsar/Orsera in the south. Since the 1970s, the shore of Pore/Parenzo and surrounding Rovinj has been Croatia’s most popular tourist destination.

The Austrian Lloyd shipping company launched a tourist route that called at Parenzo in 1844. The first tourist guide to describe and portray the town was published in 1845. The Riviera, built in 1910, is the city’s oldest hotel. The Parentino and others followed.

Tourist infrastructure is now deliberately distributed over the 37 km (23 mi) long beach between the Mirna River and the deep Lim valley. Plava Laguna (Blue Lagoon), Zelena Laguna (Green Lagoon), Bijela Uvala (White Cove), and Brulo are self-contained centers in the south. Materada, Červar Porat, Ulika and Lanterna are mirrored centers to the north. During the peak season, the temporary population of the region might surpass 120,000 people.

The legacy of Porec/Parenzo may be viewed in the ancient town center, in museums and galleries housed in mansions and palaces, many of which are still private residences as they have been for generations. Weekend travelers from Croatia, Slovenia, Austria, and Italy frequent the region during the off season. Sports facilities are built and utilized all year.

The local temperature is reasonably moderate and free of intense summer heat due to its location on Istria’s western coast, which is cooled by sea breezes. July is the warmest month, with a maximum air temperature of 30°C in low humidity, while January is the coldest, with an average temperature of 6 °C (43 °F). There are over 2,400 hours of sunlight each year, with an average of more than 10 hours during the summer months. Sea temperatures may reach 28 degrees Celsius (82 degrees Fahrenheit), which is greater than one would think compared to the coast of southern Croatia, where air temperatures are higher. The average annual rainfall of 920 mm (36.2 in) is very evenly spread throughout the year, with the exception of July and August, which are quite dry. The winds here are Bora, which brings cold, clear weather from the north in the winter, and Sirocco, which brings rain from the south. The Maestral is the summer wind that sweeps from the sea to the land.

Historically, economic activities have always been linked to the land and water. The sole substantial industry in the region is food processing, although Pore/Parenzo is witnessing expansion in its commerce, banking, and communication sectors as Croatia continues to integrate into the larger European economy. However, tourism is the main source of revenue.

Because of the city’s great position, real estate prices are quite expensive.