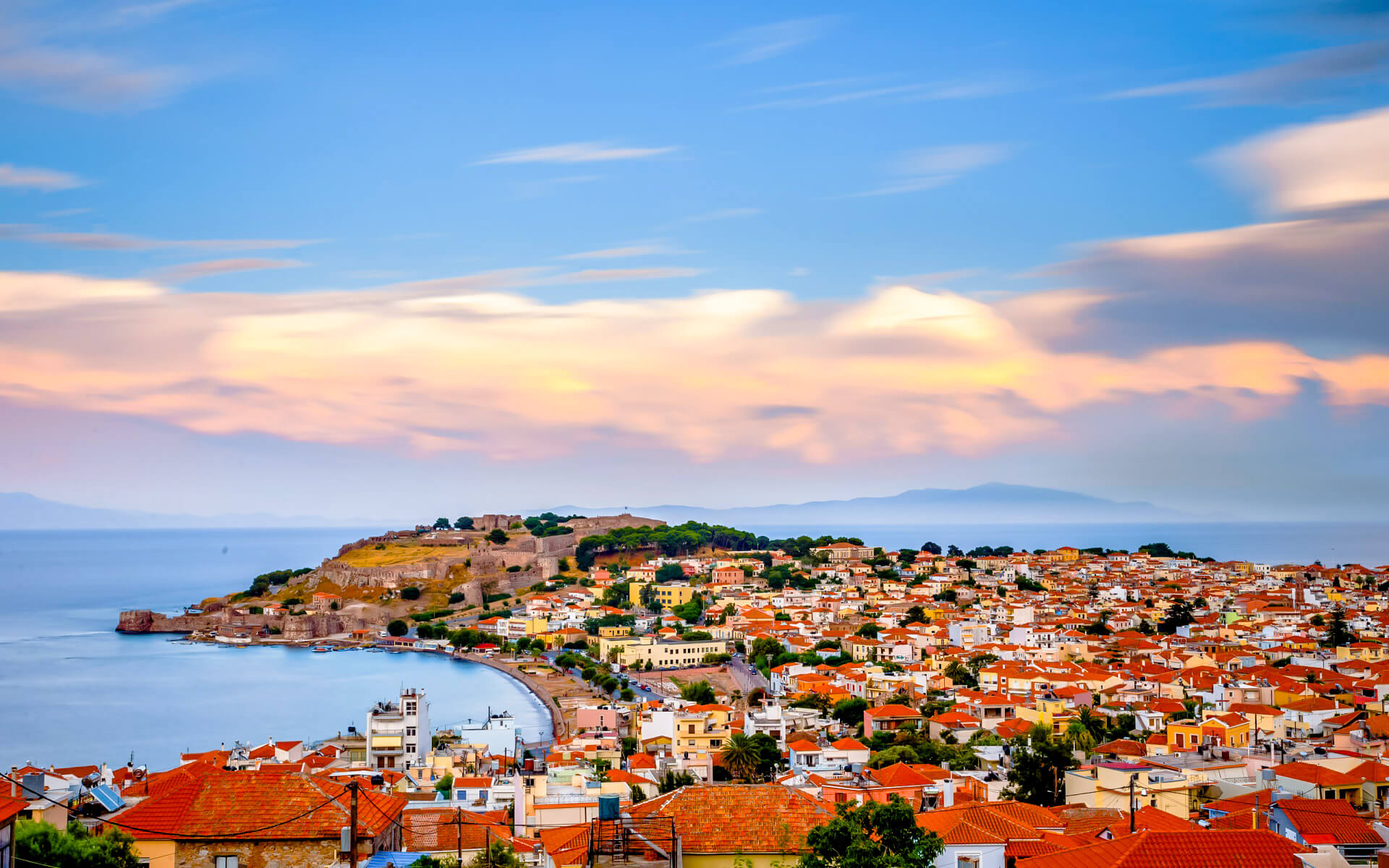 Lesbos or Lesvos is the northernmost of Greece’s East Aegean Islands, protruding from the Asia Minor peninsula.

From Greek antiquity to the present day, the island of Lesbos has been the birthplace of numerous poets and writers; the island of Lesbos continues to inspire, through this cultural heritage and its natural beauties of landscape contrasts, an easygoing lifestyle, expressed by its people as a familiarity towards all its visitors.

Even if some argue that it is because of the sexual theme in several poems by the legendary Sappho, it is more common to refer to the island as Mytilene rather than Lesbos. Lesvos and Mitilini are common transliterations that match the original Greek pronunciation.

Lesbos is the third-largest island in Greece, behind Crete (South) and Evvia (Centre). In terms of governance, the prefecture of Lesvos consists of three main islands: Lesbos, Lemnos to the northwest, and the small Agios Efstratios in the center of the first two.

Geographically, Lesbos consists of two saltwater gulfs, both to the south, with narrow gaps that lengthen the shoreline and shape the island in the shape of a fig tree or plane tree leaf, as described by the local nobelist poet Odysseas Elytis. The terrain varies by location; the most apparent difference is between the far west region, which is rocky and sparsely vegetated, and the east and center portions, which are dominated by olive and pine tree woods. Its height reaches over 1000 meters at both ends: north at Mount Lepetymnos and south at Mount Olympos, which has the same name as the ancient Olympus in Thessaly.

This geopark grew from the old “Lesvos Petrified Forest Geopark.” Lesbos is home to one of the few known petrified woods, the Petrified Forest of Lesbos, which has been designated as a Protected Natural Monument. Fossilized plants have been discovered at a number of locations on the island’s western coast. The fossilised forest was created by strong volcanic activity in the region from the Late Oligocene to the Lower–Middle Miocene. The middle and western parts of the island are dominated by Neogene volcanic rocks, which include andesites, dacites, and rhyolites, ignimbrite, pyroclastics, tuffs, and volcanic ash. The volcanic activity’s byproducts coated the area’s flora, and the fossilization process occurred under favorable circumstances. The fossilized plants are silicified relics of a subtropical forest that thrived 20–15 million years ago on the island’s northwestern coast.

One interpretation of the term lesbian stems from Sappho’s poetry, which were written with tremendous emotional content addressed toward other women and were born in Lesbos. Lesbian tourists flock to Lesbos, particularly to her birthplace of Eresos, as a result of this link. In 2008, a group of Lesbians on the Greek island of Lesbos lost a court lawsuit against Greece’s LGBT community. The Lesbos islander group had asked a judicial order to prohibit organizations from using the term “lesbian” in their titles, which the petitioners argue violates their human rights since it is “insulting” and disgraces them globally.

The island has a Mediterranean climate with scorching summers (Csa in the Koeppen climate classification). The average annual temperature is 18 degrees Celsius (64 degrees Fahrenheit), and the average annual rainfall is 750 millimeters (30 in). It is one of the sunniest islands in the Aegean Sea due to its remarkable sunlight. Snow and very low temperatures are unusual.

Lesbos is located in the extreme east of the Aegean Sea, facing the Turkish shore (Gulf of Edremit) from the north and east; the strait is roughly 5.5 km (3.4 mi) wide at its narrowest point. The island is generally triangular in form, although it is heavily intruded by the gulfs of Kalloni, which has an entrance on the southern shore, and Gera, which has an entry in the southeast.

The island is wooded and rugged, with two high peaks dominating its northern and central regions, Mt. Lepetymnos at 968 m (3,176 ft) and Mt. Olympus at 967 m (3173 ft). The volcanic origins of the island are seen in various hot springs and the two gulfs.

Lesbos is a verdant, appropriately called Emerald Island, with a wider diversity of vegetation than one would anticipate for an island of its size. Together with other fruit plants, 11 million olive trees cover 40% of the island. The remaining 20% is scrub, grassland, or urban, with a mix of mediterranean pines, chestnut trees, and some oaks.

Lesbos’ economy is mostly agricultural in nature, with olive oil serving as the primary source of wealth. Tourism in Mytilene, aided by its international airport and the coastal communities of Petra, Plomari, Molyvos, and Eresos, contributes significantly to the island’s economy. The other sources of revenue include fishing, soap manufacturing, and ouzo, the Greek national liquor.