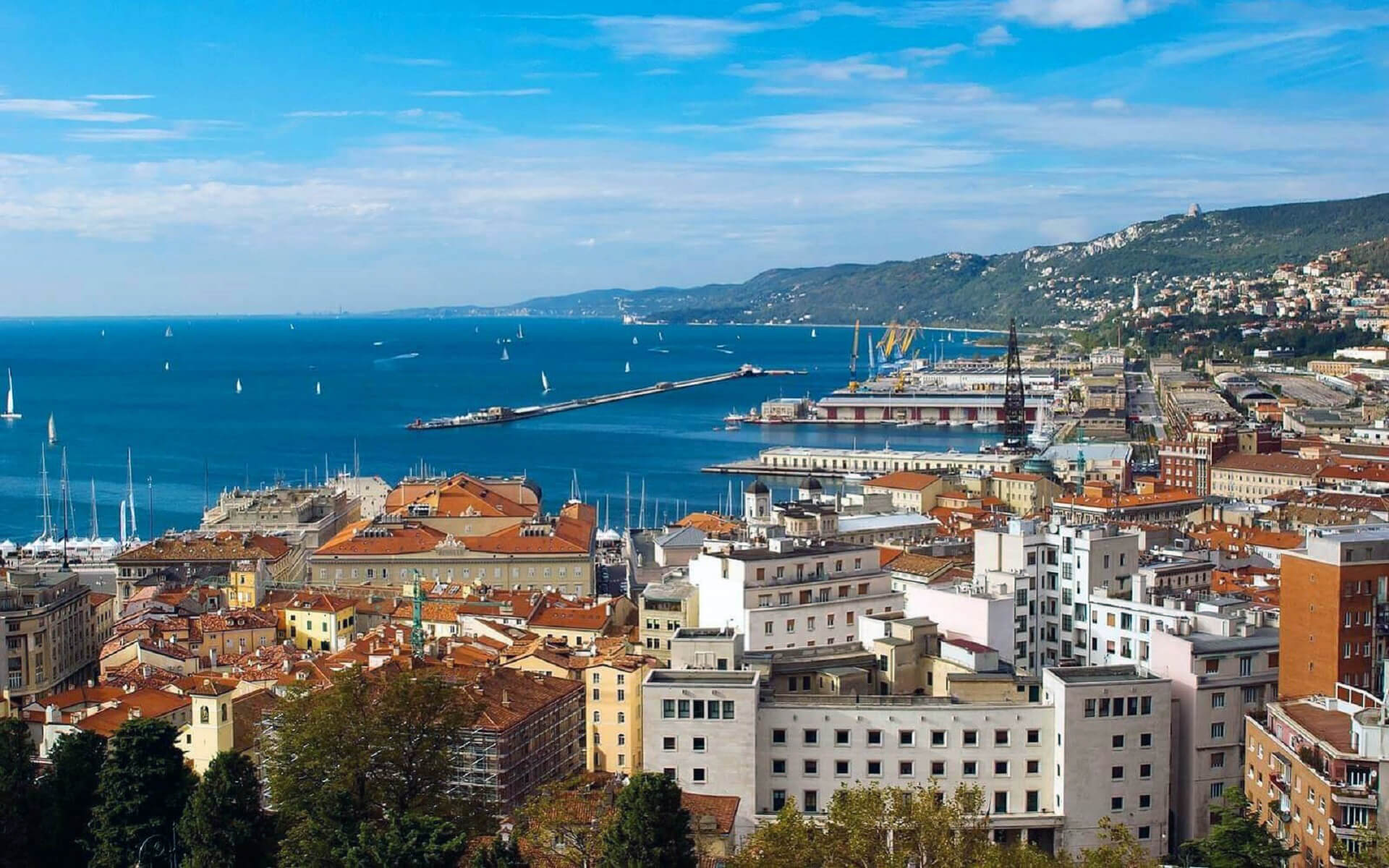 Trieste is a seaport and city in northeastern Italy. It is located towards the end of a thin strip of Italian territory that stretches between the Adriatic Sea and Slovenia, which is practically directly south and east of the city. It is also close to Croatia, around 30 kilometers (19 miles) south. Trieste is situated at the mouth of the Gulf of Trieste and has been impacted throughout history by its position at the crossroads of Latin, Slavic, and Germanic civilizations. It has a population of over 205,000 people and serves as the capital of the autonomous territory Friuli-Venezia Giulia and the Province of Trieste.

Trieste was one of the Habsburg Monarchy’s earliest provinces. It was the most significant port of one of Europe’s Great Powers in the nineteenth century. Trieste grew to become the fourth biggest city in the Austro-Hungarian Empire as a successful seaport in the Mediterranean area (afterVienna, Budapest, andPrague). It rose to prominence as a prominent center for literature and music during the fin-de-siècle period. It had an economic renaissance in the 1930s, and Trieste played a major role in the postwar conflict between the Eastern and Western blocs. Today, the city lies in one of Italy’s wealthiest areas, and it has long been a major center for shipping, shipbuilding, and financial services, thanks to its harbor (Port of Trieste).

Trieste (Triest in German, Trst in Slovenian and Croatian) is a city in northern Italy that was formerly a prominent and important center of politics, literature, music, art, and culture under Austrian-Hungarian rule.

Today, Trieste is frequently overlooked as tourists flock to larger Italian cities such as Rome and Milan, despite the fact that it is a very charming and underappreciated city with a quiet and lovely almost Eastern European atmosphere, several pubs and cafes, some stunning architecture, and a beautiful sea view. It was also the home of the great Irish writer James Joyce for a time.

It is located at a crossroads of various economic and cultural movements, with Germany to the north, Slavic masses and the Balkans to the east, Italy and then Latin nations to the west, and the Mediterranean Sea to the south.

Its aesthetic and cultural past is inextricably related to its unique “border town” setting. As Trieste was a very important port during the 18th century, you can find some old Roman architecture (a small theatre near the sea, a nice arch into the old city, and an interesting Roman museum), Austrian empire architecture across the city center (similar to stuff you can find in Vienna), and a nice atmosphere of metissage of Mediterranean styles.

Trieste’s region is divided into numerous climatic zones based on distance from the sea and height. The average temperature in January is 5.4 °C (42 °F) and 23.3 °C (74 °F) in July. The city has a humid subtropical climate (Cfa in the Köppen climate classification) with considerable Mediterranean influences.

Trieste is located in northeastern Italy, close the Slovenian border, in the northernmost region of the upper Adriatic. The city is located on the Trieste Gulf.

Trieste’s urban zone, which is primarily built on a slope that becomes a mountain, is located at the foot of an outstanding escarpment that descends suddenly from the Karst Plateau towards the sea. Close to the city, karst features reach a height of 458 meters (1,503 feet) above sea level.

It is located on the geographical boundaries of the Italian geographical area, the Balkan Peninsula, and Mitteleuropa.

Trieste became a significant European city in economics, trade, and business during the Austro-Hungarian Empire, and was the empire’s fourth-largest and most important center after Vienna, Budapest, and Prague. However, Trieste’s economy declined with the city’s transfer to Italy during World War I. However, Fascist Italy encouraged a massive expansion of Trieste in the 1930s, with new industrial operations tied especially to naval and military sectors (such as the well-known “Cantieri Aeronautici Navali Triestini (CANT)”). Allied airstrikes during World War II decimated the city’s industrial district (mainly the shipyards). As a result, Trieste was mostly a peripheral city throughout the Cold War. However, Trieste has witnessed a modest economic resurgence since the 1970s.

Today, Trieste is a vibrant and cosmopolitan city with a cultural community that accounts for around 8% of its population, and it is a significant EU hub for trade, politics, culture, shipbuilding, education, transportation, and business. The city is a part of the Corridor 5 initiative, which aims to improve transportation links between Western and Eastern Europe by passing via Slovenia, Croatia, Hungary, Ukraine, and Bosnia.

The Port of Trieste is a commercial maritime center with active container and oil terminals, as well as steel factories. The oil terminal feeds the Transalpine Pipeline, which serves 40 percent of Germany’s energy needs (100 percent in Bavaria and Baden-Württemberg), 90 percent of Austria, and more than 30 percent of the Czech Republic. One of the busiest RO/RO [roll on roll off] lines in the Mediterranean connects the ports of Trieste and Istanbul. The port is also Italy’s and the Mediterranean’s (as well as one of Europe’s) most important coffee port, providing more than 40% of Italy’s coffee. Trieste’s successful coffee business originated under Austria-Hungary, with the Austro-Hungarian government even granting the city tax-free status to stimulate greater trade. Some relics of Austria-coffee-fueled Hungary’s economic ambition, such as the Hausbrandt Trieste coffee firm, exist. As a consequence, modern-day Trieste has a plethora of cafes and is still renowned as “the coffee capital of Italy.” The Trieste Coffee Cluster was founded by coffee companies as their major umbrella organization, but also as an economic operator in its own right.

Cannes is a city on France’s French Riviera. It is a commune in the region of Alpes-Maritimes in France, and it is the location...
Read more

The Bahamas, formally the Commonwealth of the Bahamas, is an archipelago state in the Atlantic Ocean, north of Cuba and Hispaniola (Haiti and the...
Read more

Kuşadası is a beach tourist town in Aegean, Turkey’s Aydin Province. It has become a popular vacation destination, particularly for people from Northern and...
Read more

Nha Trang is a beach city and the seat of Khánh Ha Province on Vietnam’s South Central Coast. It is bordered to the north...
Read more

Kolkata is the capital of West Bengal, an Indian state. It is the important economic, cultural, and educational center of East India, located on...
Read more

Milan is the capital of the Lombardy region and the country’s first most populous city. The city proper has a population of 1.3 million...
Read more
Tourist destinations