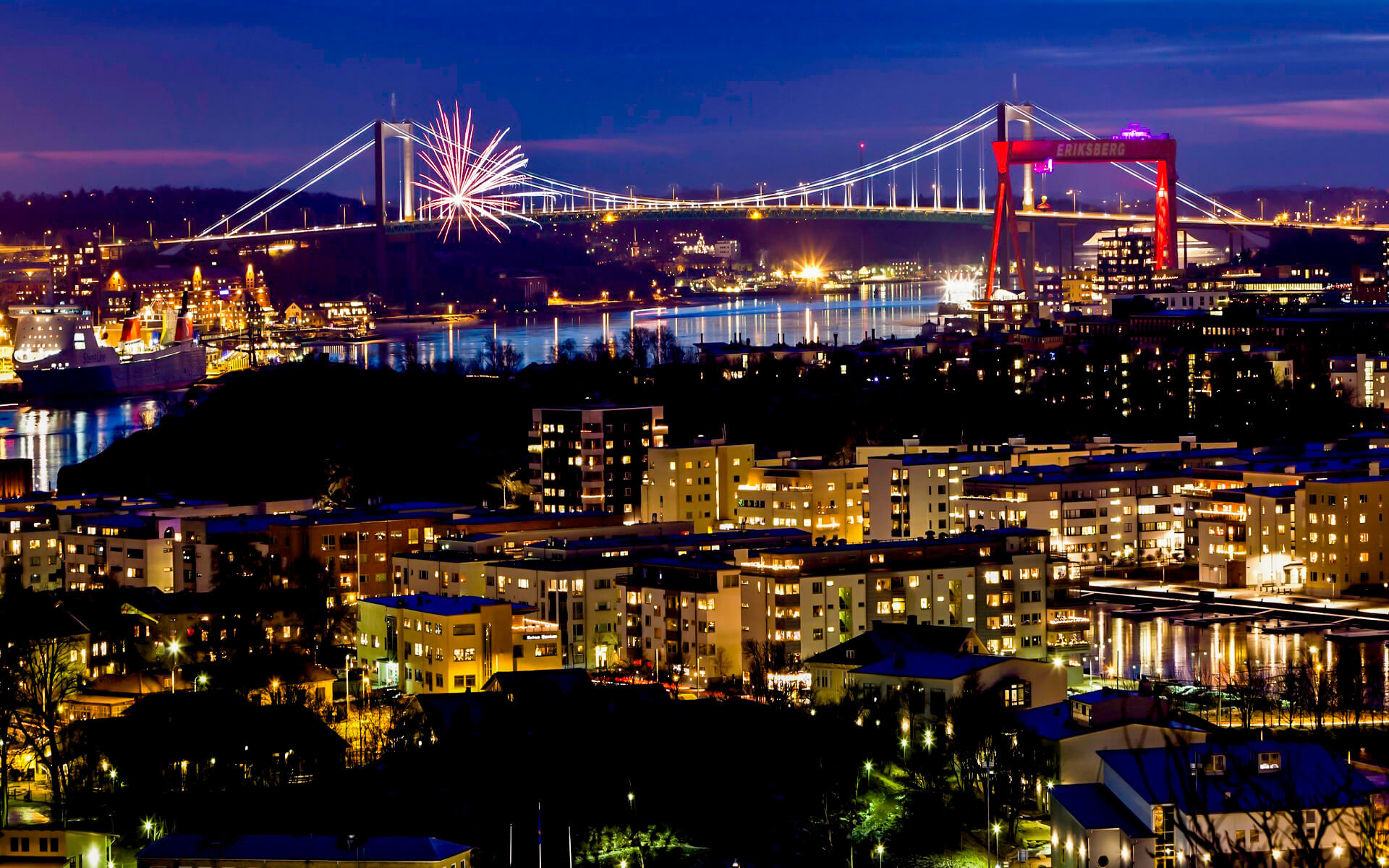 Gothenburg is Sweden’s second-largest city and the Nordic nations’ fifth-largest. The city proper has a population of 549,789, with 549,839 in the urban area and 982,360 in the metropolitan region, and is located on the west coast of Sweden near the Kattegat.

King Gustavus Adolphus established Gothenburg by royal charter in 1621. The Port of Gothenburg, located at the mouth of the Göta älv, is the biggest port in the Nordic nations.

The city holds some of Scandinavia’s major yearly events. With around 155,000 people each year, the Gothenburg Film Festival, which has been held in January since 1979, is the main Scandinavian film festival. During the summer, the city hosts a number of music events, including Way Out West and Metaltown.

Gothenburg, far from being the dismal industrial city one would expect, is lush and makes the most of its riverine and marine environment, with numerous parks and canals. There are also numerous historic monuments from its very brief but magnificent history, as well as traces of Dutch-sourced city design that links Gothenburg to Amsterdam and Jakarta. With almost 60,000 pupils, it also has a young aspect (Gothenburg University is the largest in Scandinavia). Gothenburg has a reputation for being a pleasant city, perhaps more so than Stockholm, Sweden’s capital.

Gothenburg was created in the early 17th century by the Swedish King, Gustav II Adolf. It was originally the epicenter of the Swedish shipbuilding industry, but due to increased competition from foreign shipyards, several of the dry docks were forced to shut. Much of the inner harbor region has shifted from industrial ship building to high technology and education, mirroring the city’s overall transformation. Today, Gothenburg is home to both worldwide athletic events, concerts, and conferences, as well as a small-town atmosphere.

Politically, it has long been governed by the left-wing Social Democrats, however Swedish politics is shifting significantly to the right.

In central Gothenburg, there are two tourist information offices: one in Nordstan shopping center (next to the central train station) and one on Kungsportsplatsen, about ten minutes walk from Nordstan. Another source of information is Gothenburg’s official tourism website.

In the event that official tourist information is missing, Gothenburg residents are typically more than happy to assist.

The climate in Gothenburg is oceanic. Despite its northern latitude, temperatures are moderate all year and milder than towns of comparable latitude, such as Stockholm, or even somewhat farther south, owing to the moderating impact of the warm Gulf Stream. In the summer, daylight lasts 18 hours and 5 minutes, while in late December, it lasts 6 hours and 32 minutes. The climate has been much milder in recent decades, especially in the summer and winter; July temperatures used to be lower than Stockholm’s 1961-1990 averages, but have now risen beyond that threshold.

Summers are warm and pleasant, with typical high temperatures of 19–20 °C (66–68 °F) and lows of 10–12 °C (50–54 °F), however temperatures of 25–30 °C (77–86 °F) are common on many days. Winters are chilly and windy, with temperatures ranging from 3 to 3 °C (27 to 37 °F), however temperatures seldom fall below 15 °C (5 °F). Throughout the year, precipitation is frequent but typically modest. Snow falls mostly from December to March, although it is not uncommon in November and April, and it may sometimes fall in October and May, and in severe situations, September.

Gothenburg is situated in southern Sweden, on the west coast, almost midway between the capitals of Copenhagen, Denmark, and Oslo, Norway. The city’s position near the mouth of the Göta älv, which flows into Kattegatt, an arm of the North Sea, has aided its growth as a commercial center. The Gothenburg archipelago is made up of harsh, barren rocks and cliffs, which are characteristic of the coast of Bohuslän. The city enjoys a pleasant temperature and somewhat high precipitation due to the Gulf Stream. It is Sweden’s second-largest city after the capital, Stockholm.

Hjällbo, Eriksbo, Rannebergen, Hammarkullen, Grdsten, and Lövgärdet are all part of Angered, a suburb outside of Gothenburg. It is a Million Programme neighborhood in Gothenburg, similar to Rosengrd in Malmö and Botkyrka in Stockholm. In 2015, the population of Angered was about 50,000 people. It is located north of Gothenburg and is cut off from the rest of the city. Bergsjön is another Million Programme suburb north of Gothenburg, with a population of 14,000 people. Biskopsgrden is the most populous multicultural suburb on the island of Hisingen, which is part of Gothenburg but is separated from it by the river.

Trade and shipping have long played an important part in Gothenburg’s economic history, and they continue to do so due to the city’s excellent position in the heart of Scandinavia. The port of Gothenburg has grown to become Scandinavia’s biggest.

Apart from commerce, Gothenburg’s second pillar has historically been manufacturing and industry, which contribute considerably to the city’s riches. SKF, Volvo, and Ericsson are among the major corporations with factories in the region. Volvo Cars is the city’s top employer, excluding employment in supplier firms. The blue-collar industries that have long dominated the city’s economy are still essential aspects in the city’s economy, but they are increasingly being supplanted by high-tech businesses.

Banking and finance, as well as the event and tourism industries, are also significant.

The Valdemar-Göteborg gas pipeline, which runs from the North Sea fields to Sweden through Denmark, terminates in Gothenburg.

Historically, Gothenburg was the Swedish East India Company’s home base beginning in the 18th century. From its inception until the late 1970s, the city was a global leader in shipbuilding, with shipyards such as Eriksbergs Mekaniska Verkstad, Götaverken, Arnésvarvet, and Lindholmens varv. Gothenburg is a global city, according to GaWC, with a Gamma rating. Forbes has placed the city as the 12th most innovative in the world.