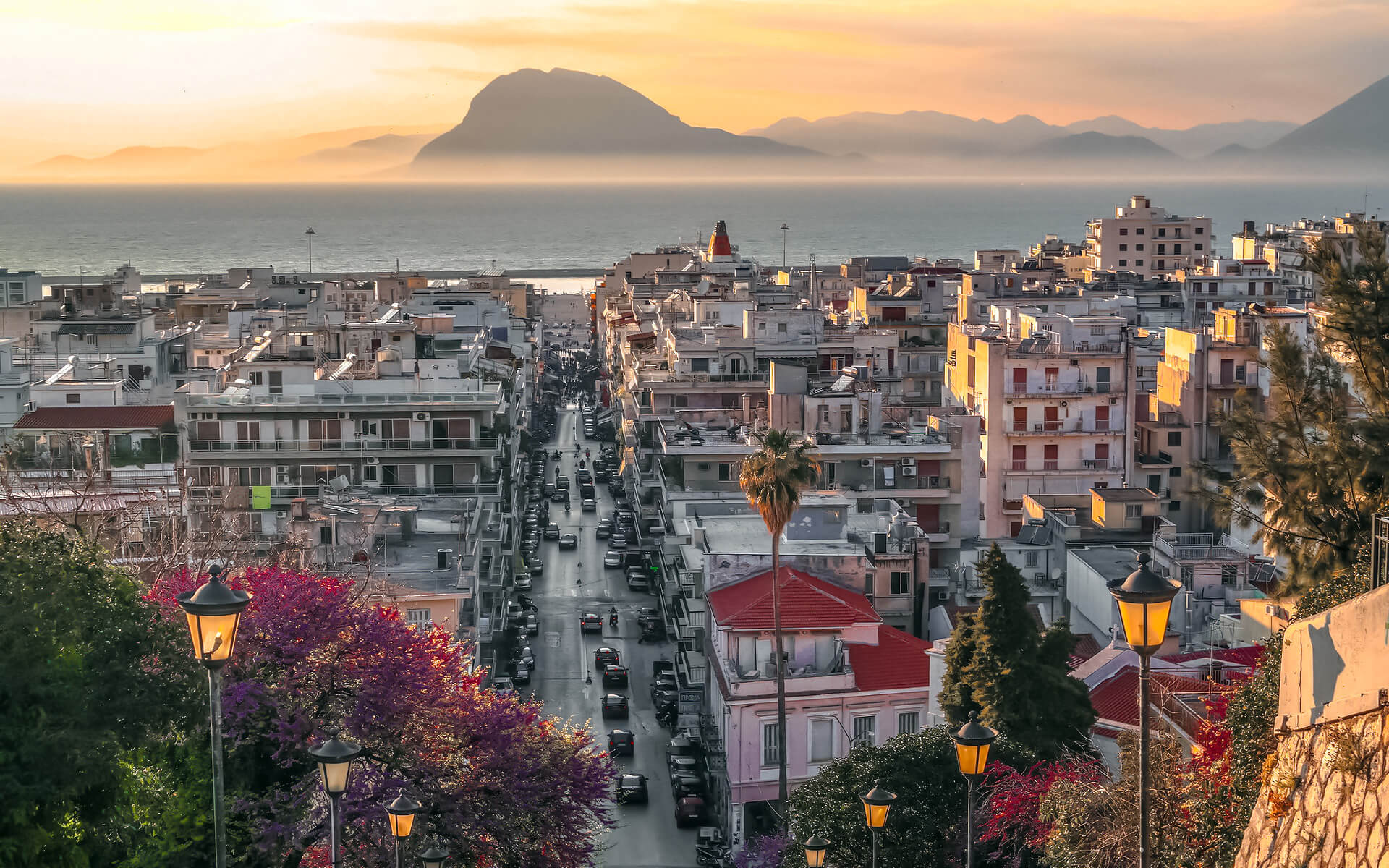 Patras is the third biggest city in Greece and the regional capital of Western Greece, located in northern Peloponnese, 215 kilometers (134 miles) west of Athens. The city is situated in the slopes of Mount Panachaikon, with a view of the Gulf of Patras.

The city of Patras has a population of 213,984 people (in 2011). The core settlement has a four-millennium history; during the Roman era, it was a cosmopolitan metropolis of the eastern Mediterranean, and according to Christian legend, it was also the site of Saint Andrew’s martyrdom. According to the 2011 census statistics, the metropolitan area has a population of 260.308 people and covers an area of 738.87 km2.

Patras, known as Greece’s Gate to the West, is a commercial center with a bustling port that serves as a node for commerce and communication with Italy and the rest of Western Europe. Patras is a prominent scientific center with a field of excellence in technical education, with two public universities and one Technological Institute housing a big student population. The Rio-Antirio bridge links Rio, Patras’ easternmost suburb, to Antirrio, linking the Peloponnese peninsula to mainland Greece.

Every year in February, the city holds one of Europe’s biggest and most colorful carnivals, with giant satirical floats and spectacular balls and parades enjoyed by hundreds of thousands of people in a lovely Mediterranean atmosphere. Patras is also known for its indigenous cultural scene, which is active mostly in the performing arts and contemporary urban literature. In 2006, it was designated as the European Capital of Culture.

Patras’ cultural events include the Patras International Festival (which includes a variety of creative activities, mostly in the disciplines of theater and music), the Patras Carnival, and the Poetry Symposium.

The Visual Arts Workshop, the Icon Painting School, the Carnival Float Workshop, the Municipal Library, the Municipal Gallery, and several private art galleries are among the other cultural establishments. The city’s architectural legacy is dominated by neoclassicism, although it also contains architecture from earlier eras. Patras is also a Council of Europe and EU Intercultural Cities pilot city.

The Patras Carnival (Patrino karnavali) is Greece’s largest festival of its type and one of Europe’s largest, having a 160-year history. The celebrations begin in January and continue through Clean Monday. The carnival includes a number of activities such as balls, parades, a children’s carnival, and creative initiatives. It reaches its pinnacle on the last weekend of Carnival, with the Saturday evening procession of carnival groups, the lavish Sunday march of floats and groups, and ultimately the customary burning of the Carnival King in the mole of Ayios Nikolaos street in Patras’ harbor. Its distinguishing characteristics include spontaneity, improvisation, inspiration, and volunteering.

The climate in Patras is Mediterranean. It has typical moderate, rainy winters and hot, dry summers, with good transitional seasons in spring and fall. Autumn in Patras, on the other hand, is wetter than spring.

Patras’ urban geography is divided between upper and lower portions, which is a significant element. The lower portion of the city (Kato Poli), which contains the 19th century urban centre and the port, is near to the sea and runs between the estuaries of the Glafkos and Haradros rivers. It was constructed on a bed of river sediments and dried-up marshes. The older upper part (Ano Poli) encompasses the territory of the pre-modern village, surrounding the Fortress, on Mount Panachaikon’s final height (1,926 m (6,319 ft)) before the Gulf of Patras.

The city’s economy is heavily reliant on a robust service industry. Retailing, logistics, banking, and public-sector services are among its primary economic activities. Patras had a significant deindustrialization crisis in the late 1980s and 1990s, with a number of important producing units closing down in quick succession. As a consequence, the authorities had to re-evaluate and reorganize a significant section of the city’s personnel, as well as the city’s whole economic strategy. The University of Patras helped to this aim by using its well-known service and technological areas. Some traditional winemaking and food industries, as well as a small agricultural sector, remain in the area.