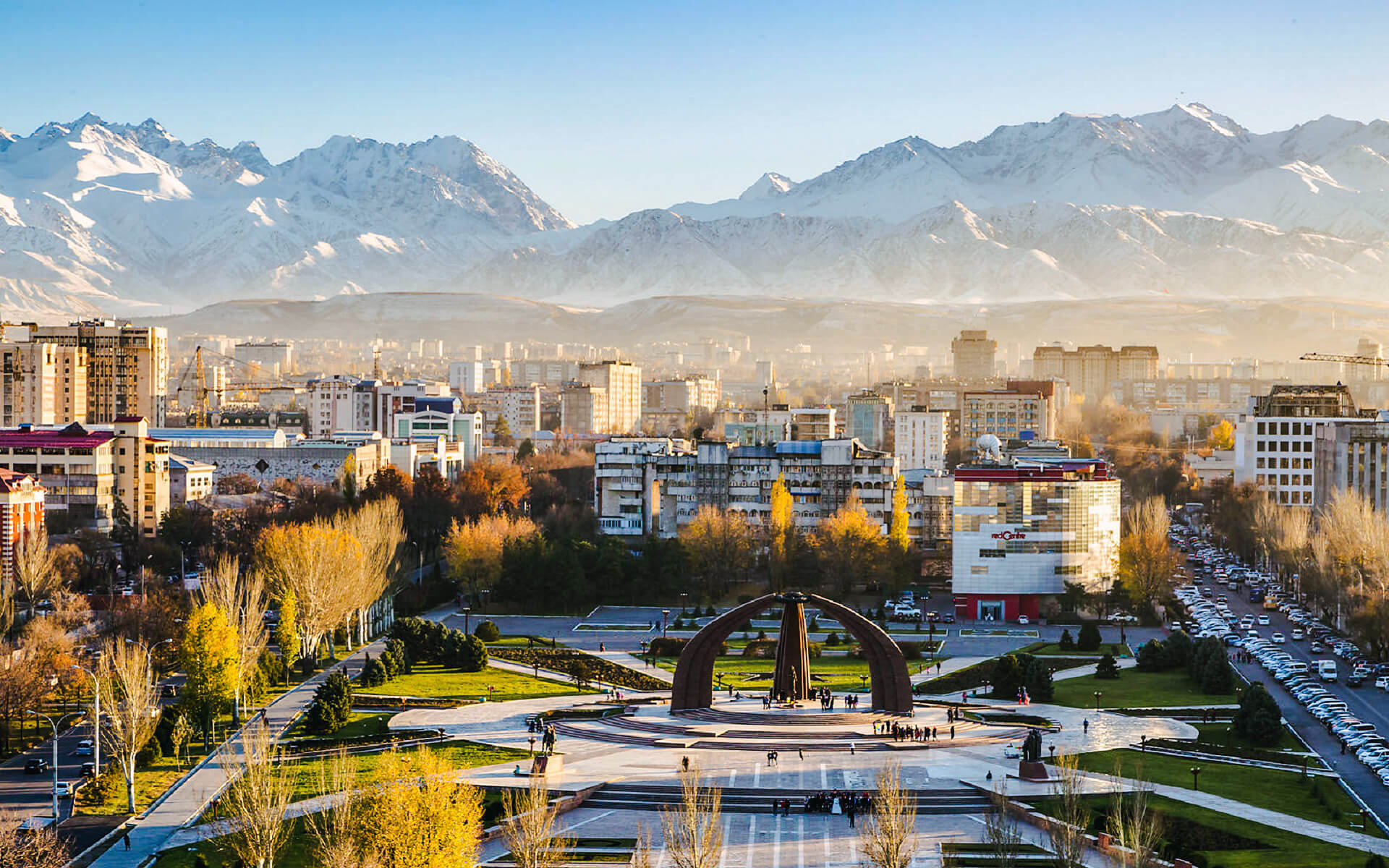 Bishkek is also the administrative center of Chuy Province, which surrounds the city, despite the fact that the city is not a province-level entity of Kyrgyzstan.

The name is assumed to stem from a Kyrgyz term for a churn used to manufacture fermented mare’s milk (kumis), the Kyrgyz national drink, although this is questionable.

Bishkek is located at an elevation of around 800 meters (2,600 feet), just off the northern edge of the Kyrgyz Ala-Too range, an extension of the Tian Shan mountain range, which reaches to 4,855 meters (15,928 feet) and offers a stunning background to the city.

Bishkek is a metropolis with vast boulevards and marble-faced public buildings, as well as several Soviet-style apartment towers encircling indoor courtyards and hundreds of smaller privately constructed dwellings, particularly outside the city center. It is organized in a grid form, with most streets bordered on both sides by thin irrigation ditches that nourish the many trees that give shade during the scorching summers.

Bishkek, on the other hand, is a fascinating example of a czarist planned city, with vast boulevards backed by irrigation canals and huge trees, marble-faced buildings, and Soviet residential complexes.

Many young tourists enjoy Bishkek’s nightlife, and the inhabitants are kind and welcoming. Bishkek is a city full with young people who congregate in clubs and little cafés. Kyrgyzstan has the most permissive tourist visa policy in Central Asia, therefore Bishkek is an excellent site to begin a Silk Road journey and get visas for neighboring countries.

The climate in Bishkek is humid continental.

The annual precipitation is roughly 440 millimetres (17 in).

The summer months are characterized by dry spells punctuated by thunderstorms that bring strong gusty winds and unusual dust storms. Along with the smaller chain that runs NW to SE, the mountains to the south form a natural border that protects from most of the harmful weather.

During the winter, the dominant characteristics include infrequent snow storms and frequent thick fog. When an inversion forms, the fog might continue for days.

The city’s core is mostly constructed on a rectangular grid pattern. The east–west Chui Avenue (Chuy Prospekti) is the city’s principal thoroughfare, named for the region’s main river. It was known as Lenin Avenue during the Soviet period. Many of the most significant government buildings, universities, the Academy of Sciences complex, and so on may be located along it or within a block or two of it. Deng Xiaoping Avenue is the avenue’s westernmost part.

Yusup Abdrakhmanov Street, still known by its previous name, Sovietskaya Street, is the principal north–south axis. Its northern and southern halves are known as Yelebesov and Baityk Batyr Streets, respectively. Several important commercial centers are situated along it, and it offers access to Dordoy Bazaar in the north.

The som, Kyrgyzstan’s currency, is used in Bishkek. The Som’s value swings often, but in February 2015, it averaged roughly 61 som per US dollar.

Bishkek’s economy is predominantly agrarian, with large numbers of fruits, vegetables, and cattle creating a coexisting system of bartering in the outlying districts.

Bishkek’s streets are often lined with vegetable merchants in a market-style setting.

The majority of downtown has a more urban environment, including banks, businesses, marketplaces, and shopping malls.

The most popular items are the hand-crafted artisan works, which include statues, carvings, paintings, and various nature-based sculptures.

Getting mobile phone service or even internet connection is simple and a smart idea, even if you’re just staying for a few days. SIM cards (for GSM phones) are available from hundreds of vendors, including Beeline, Megacom, and Fonex. Nexi-com and Beeline both provide 3G internet access. A SIM card costs around 100 soms ($2.25) and can currently be recharged at various automated machines across the city, many of which include an English language program. If you don’t already have a compatible phone, you can get a new no-frills device for as cheap as 1200 soms ($27).